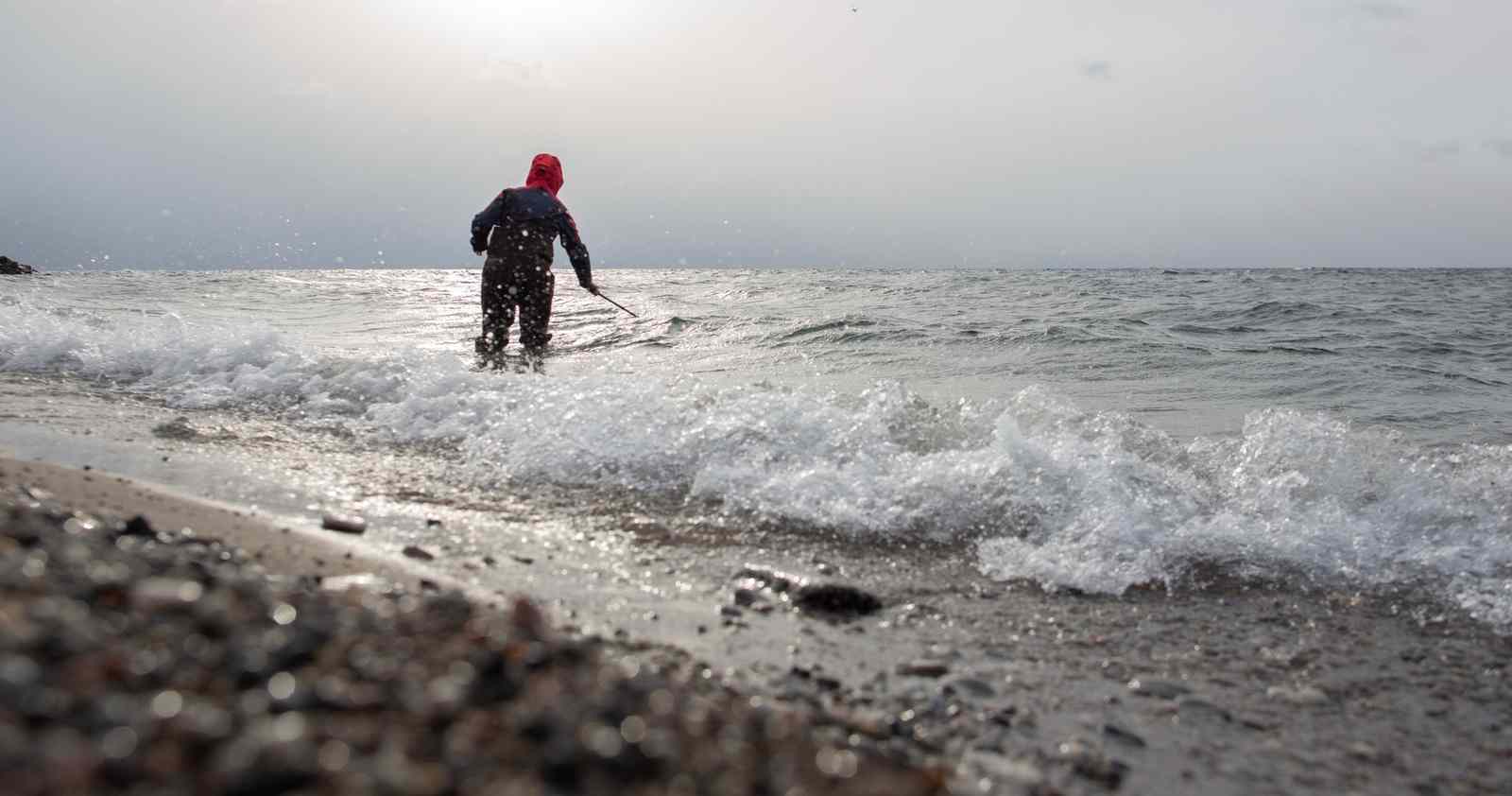 About the Toronto Monitoring Hub

“Knowing what recreational water quality means or where to find the information is not as common as you think. This can lead to two things in the City of Toronto: one swimming in areas that might be contaminated with sewage, or two avoiding perfectly swimmable beaches due to the fear of water contamination. These two issues either put public health at risk or alienates people from Lake Ontario. When people aren't connected to the water, they are much less likely to help protect it. Water quality is like the weather, it changes daily. Water quality is also very localized, meaning when one harbour or beach might have bad water quality, other locations nearby might have good water quality.”

Who works with the monitoring hub?

Co-founder of Swim Drink Fish, Krystyn Tully wrote a great blog post. It tells the story from Lake Ontario Waterkeeper’s early days of sampling, up to 2016 when the Toronto Hub started publishing its data on Swim Guide. 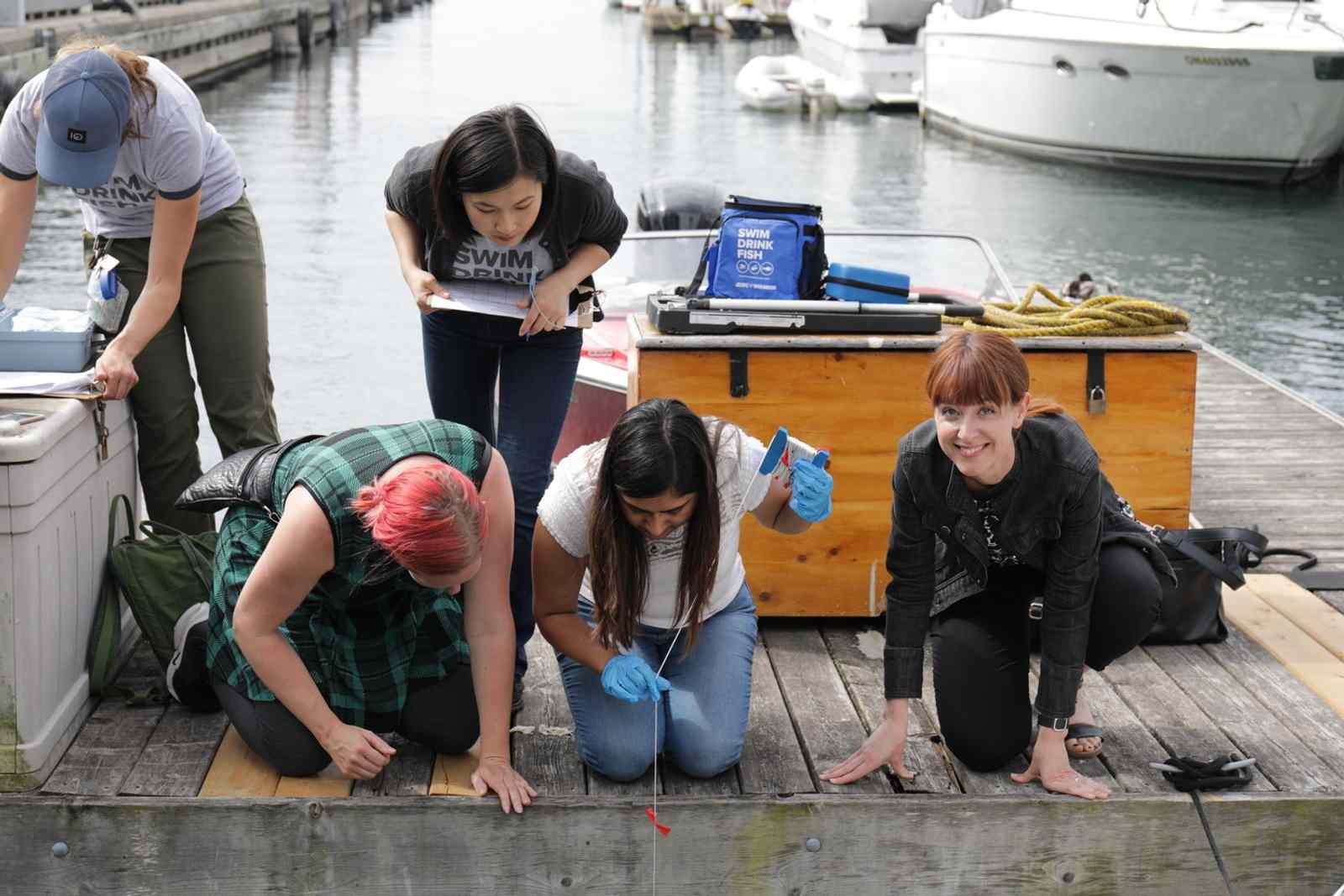 Krystyn Tully on the right, smiling big, while sampling at the Toronto Inner Harbour with Toronto Hub volunteers and staff. Credit: Dylan Nield 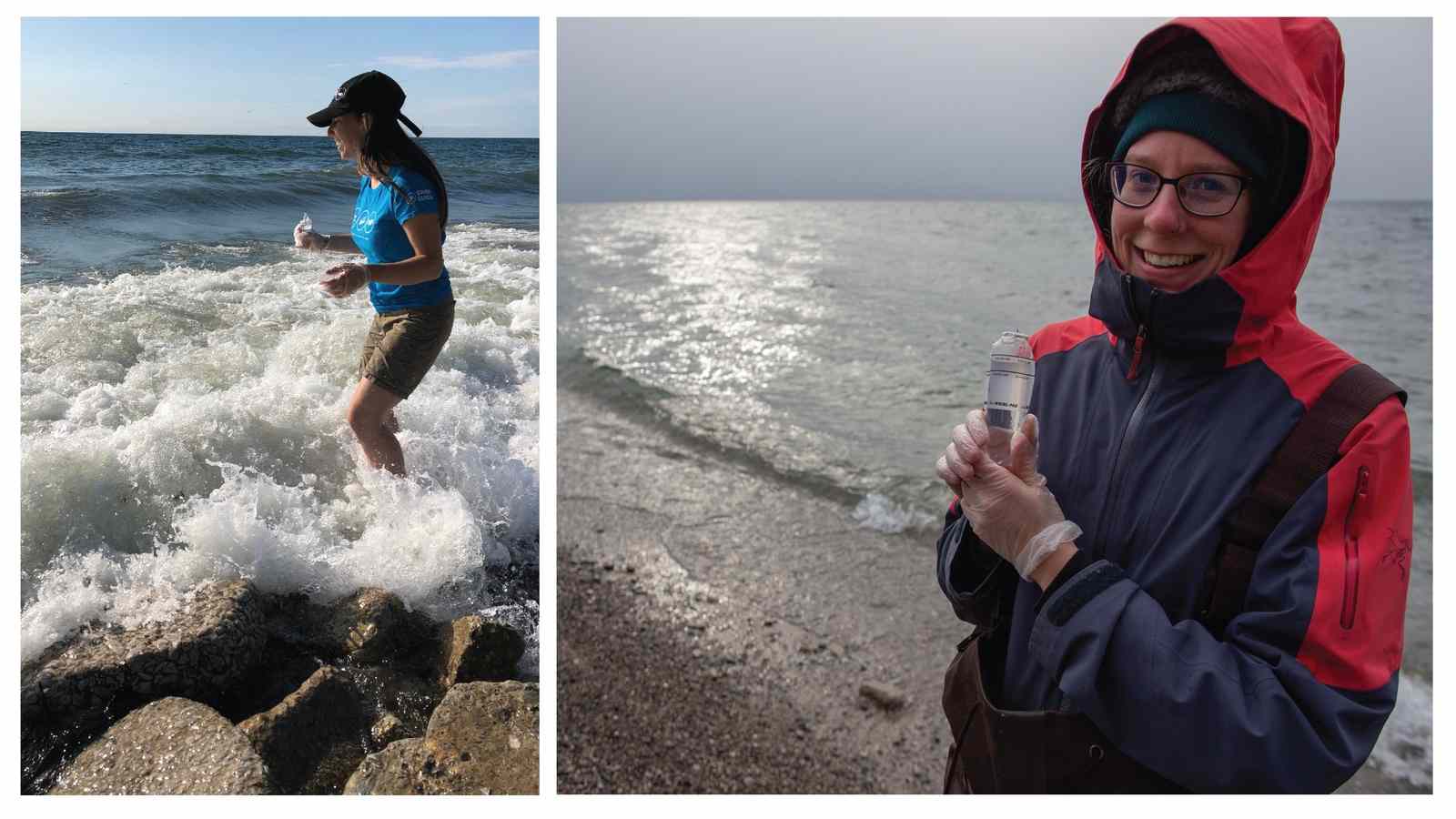 The Toronto Hub is the biggest of the Swim Drink Fish’s hubs. There are over 500 citizen scientists who have helped to monitor eight locations across the City and Wards Island. 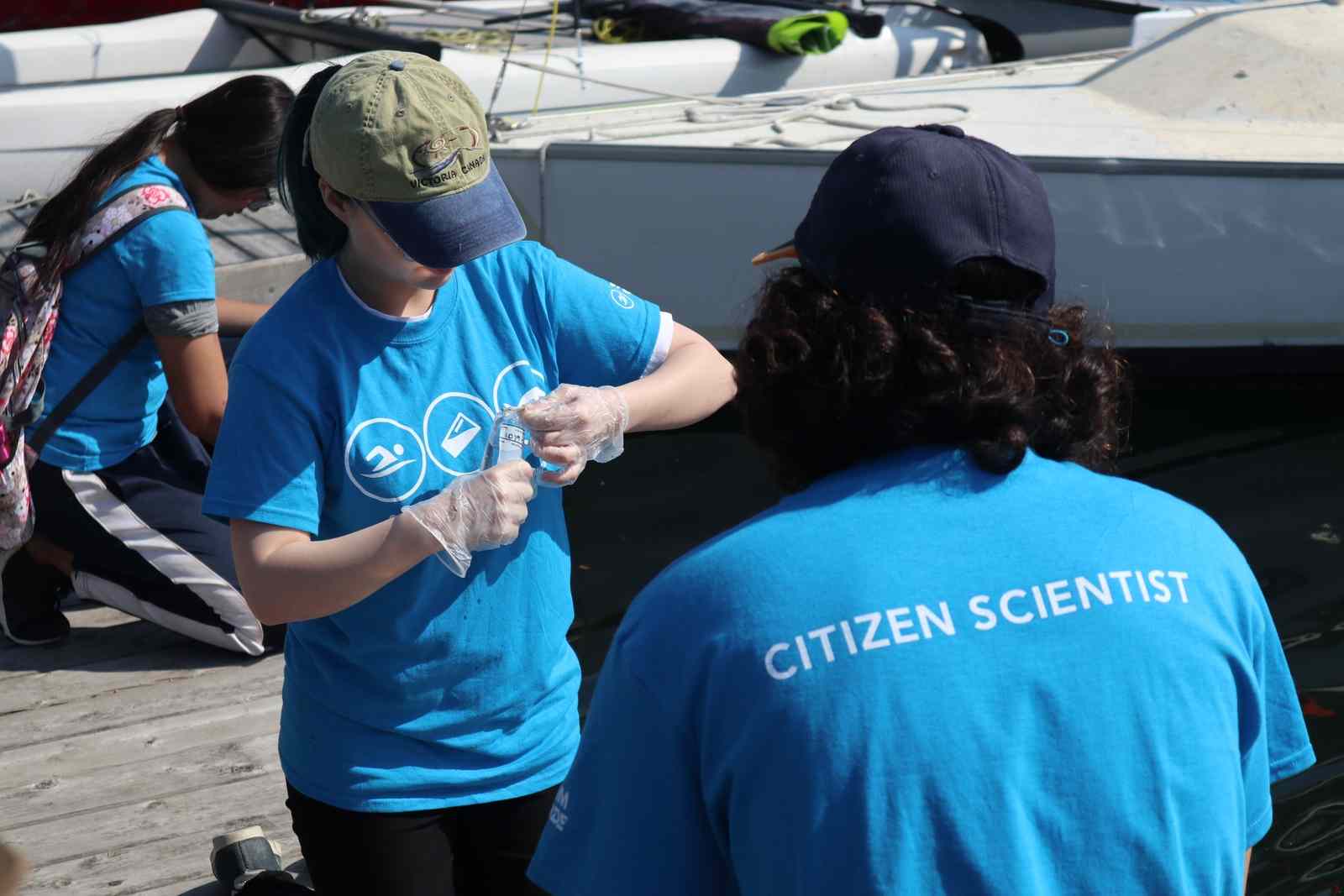 “It's really important to get people involved in water monitoring. Citizen scientists are essential to filling in the recreational water quality data gap. The Toronto Hub is only possible with the help of the dedicated people who come out in all types of weather to sample the local waters in Toronto.

In turn, the Toronto Hub provides a space for individuals to develop their knowledge and skills regarding local water issues. Becoming a citizen scientist nurtures connections and friendships with other people and with the local environment. This allows the public to make a direct contribution to local environmental research, which can help lead to solutions relating to water quality issues. Getting involved in water monitoring benefits the people taking part, the surrounding community, and helps protect local water bodies.”

How is the water monitored?

All the Swim Drink Fish hubs follow the local standards for monitoring recreational water quality. The City of Toronto follows Ontario’s pre-2018 protocol. This standard has been in place since 1984 and is in line with the most protective recreational water quality standards in the world. This standard is also followed by the Toronto Hub. Find out more information about the changes to the protocol in Ontario.

A minimum of five samples are collected at each location and with eight locations that means many incredible and dedicated citizen scientists. Without them the Toronto Hub’s work would not be possible. For four of the locations citizen scientists collect the samples and bring them (always stored safely in coolers with ice) to Elise and Alysse for processing back at the lab, the permanent lab is located at the Lake Ontario Waterkeeper office in Toronto. 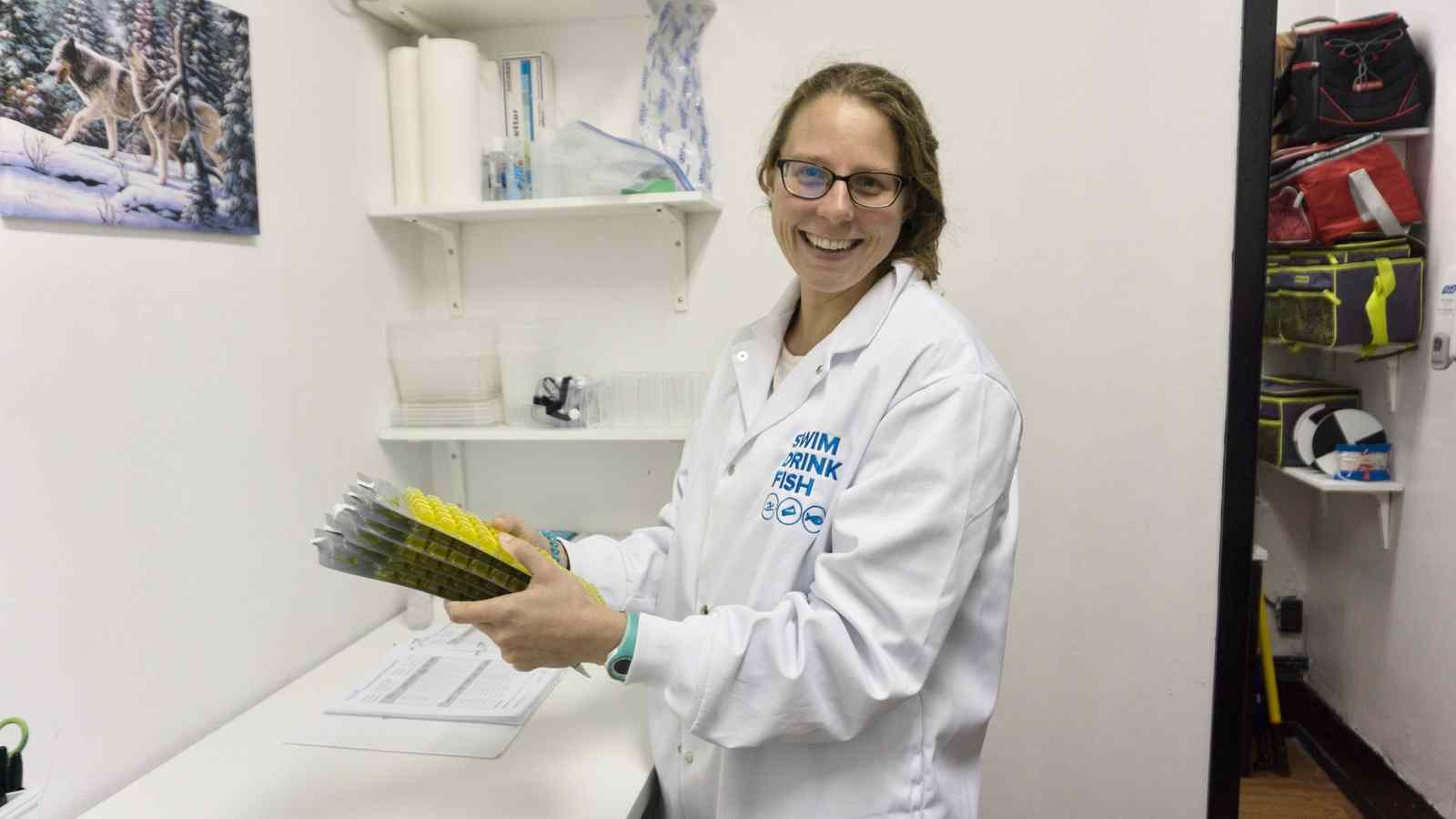 Elise reading samples back at the lab. Credit: Jessica Gordon

After the samples are processed, they are incubated for twenty-four hours. The samples are then analyzed by Elise or Alysse. Sample results are posted to Swim Guide. The public can access the results via the Swim Guide app (iOS and Android) or Swim Guide website. The raw open data set is available through Swim Drink Fish’s open data portal.

In the summer of 2019, Harbourfront Centre Camps generously donated lab space (and some of their campers!). These campers became citizen scientists as they learned about the waters they helped sample and spent their days next too. The lab was also right beside one of the sites that the Toronto Hub monitors, Marina Four. 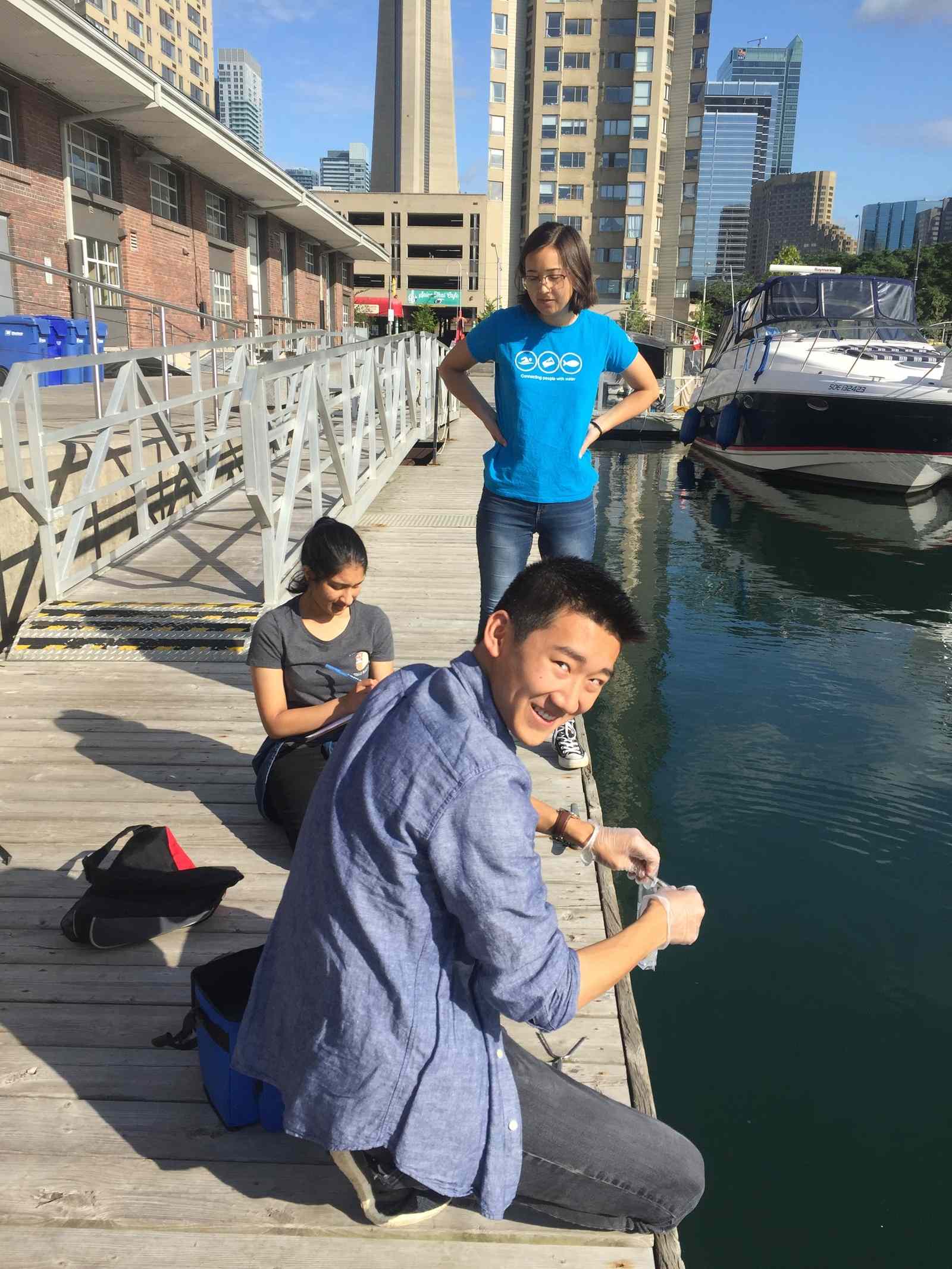 You can find out more information about how the hub monitors and processes samples here.

Where does the hub monitor? 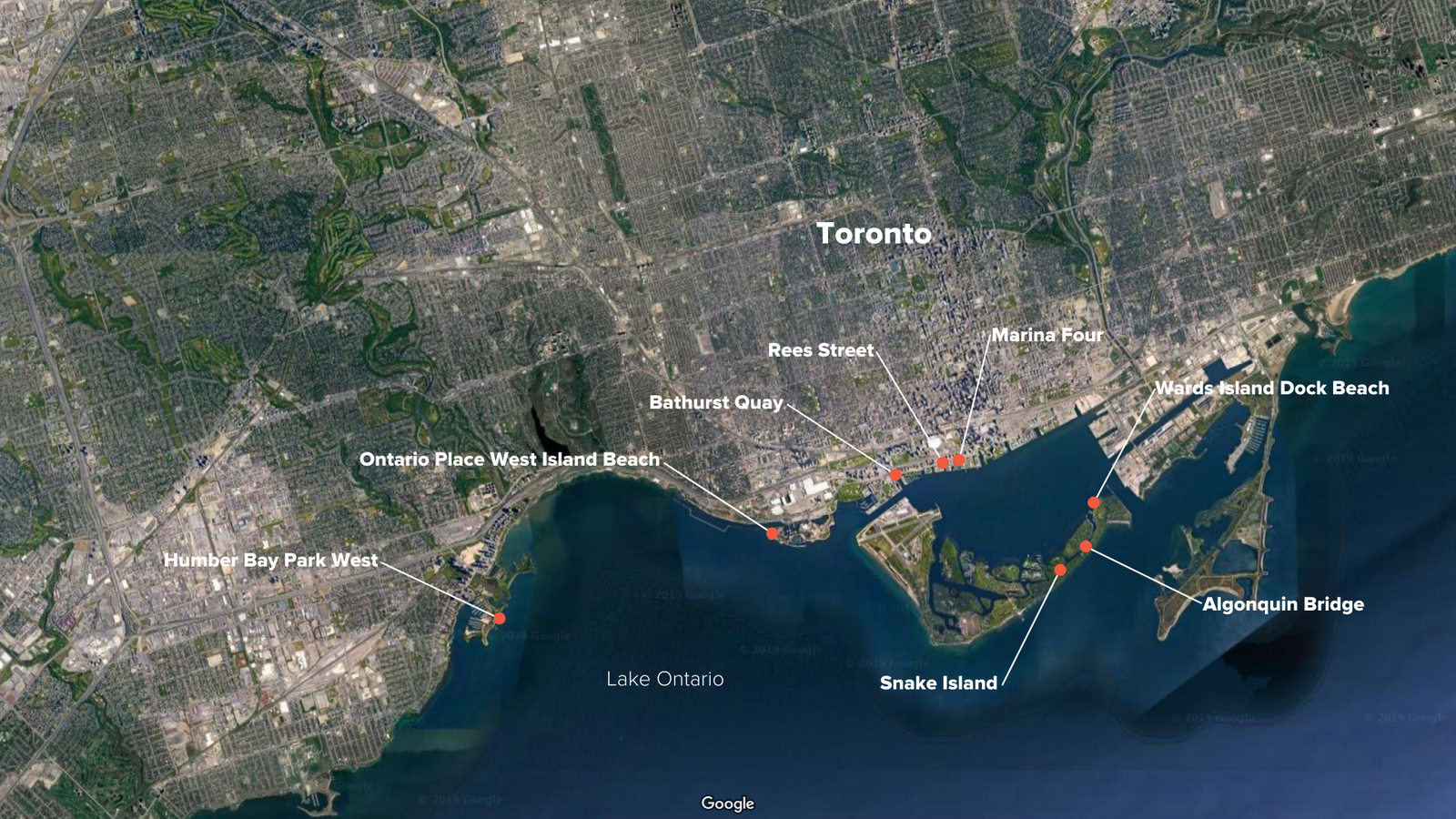 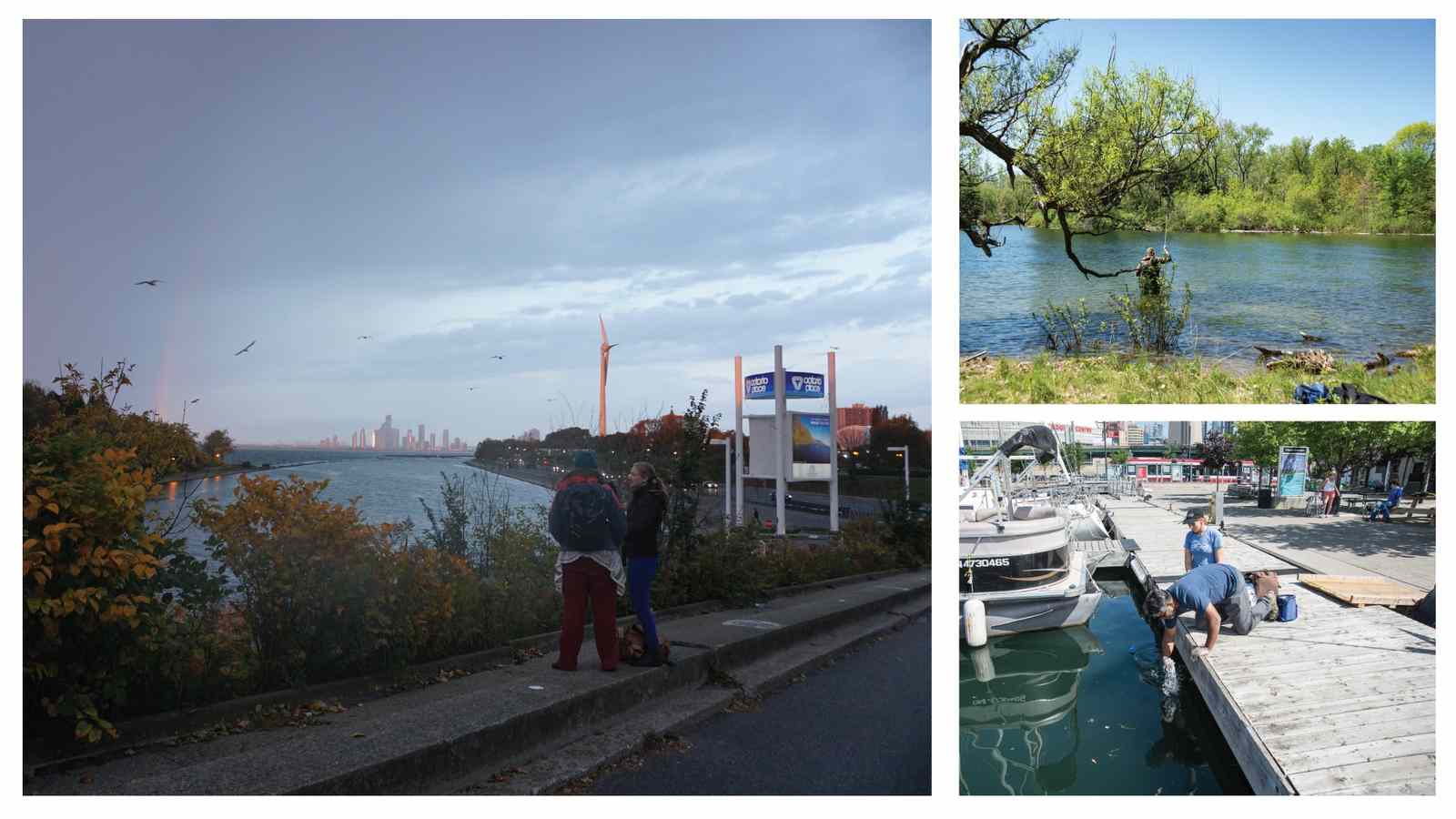 The three locations at the Toronto Inner Harbour have been sampled by hundreds of volunteers over the past few years. This location is notable as it is one of the few areas monitored where boating and paddling (kayaking, canoeing, power boating, sailing, etc.) are more common than swimming. Boaters, paddlers, and sailors sometimes end up in the water too, though not necessarily on purpose. It’s important to monitor here as recreational boat use is extremely popular in this area. 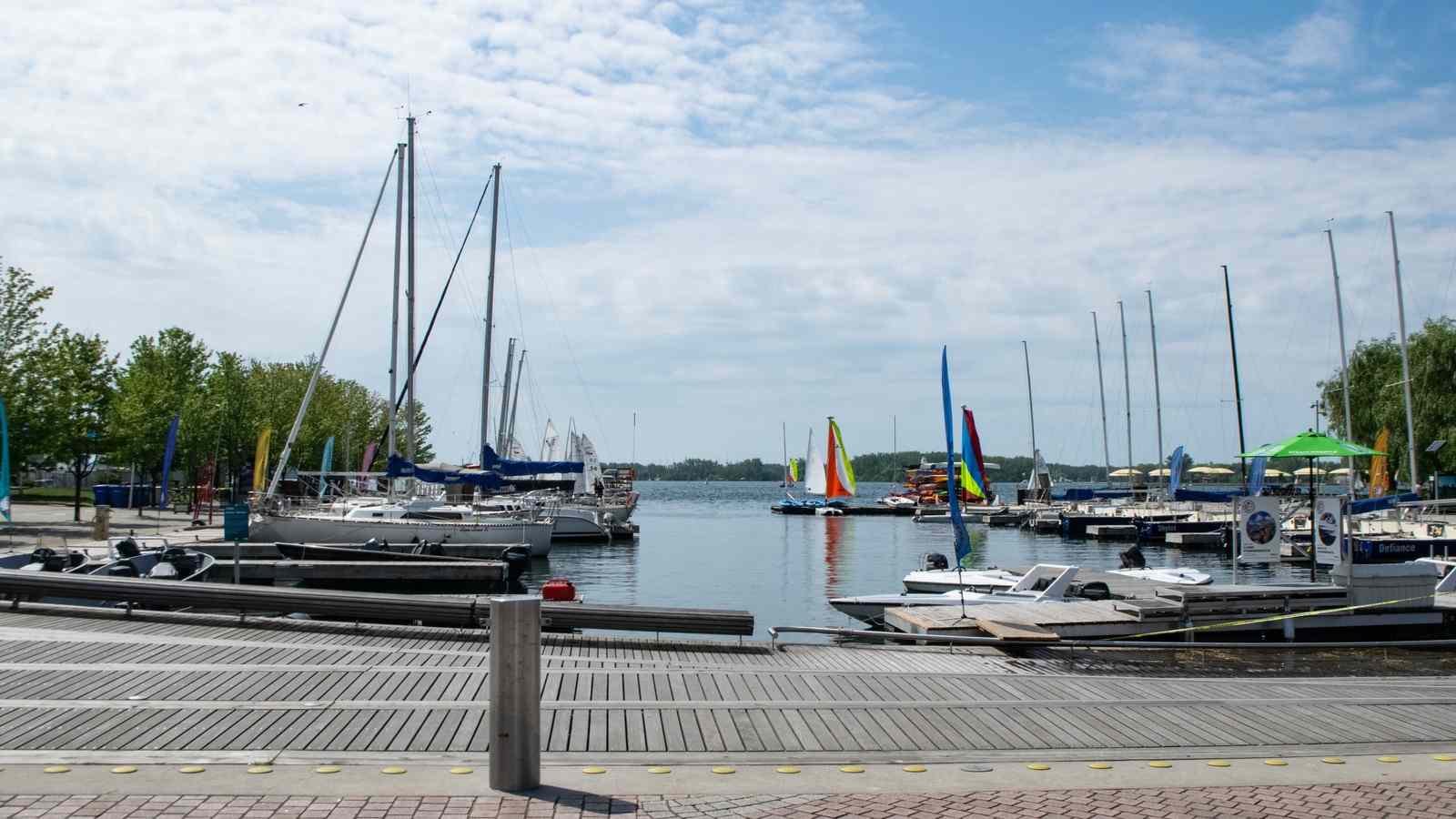 The area also has combined sewer overflows (CSOs). The City’s sewer systems can become overwhelmed by the excess water during rain and release that excess storm and wastewater, untreated or only partially treated, directly into the lake. These overflows can occur during dry weather too, which is why it’s important to check Swim Guide for up to date information about a location.

Also known as Portland Slip, Bathurst Quay lies at the base of Bathurst Street, just west of Marina Quay West. On the west side of the slip sits the Canada Malting Silos, an old mill that used to take in and store grain. The silos are no longer in service and have been designated a Heritage Site, leaving the slip primarily as a location for larger boats to dock. The site offers views of the Toronto Harbourfront and is steps from the beautiful and uniquely designed Toronto Music Garden. Year-round it is home to the people who live on the boats that they dock there. 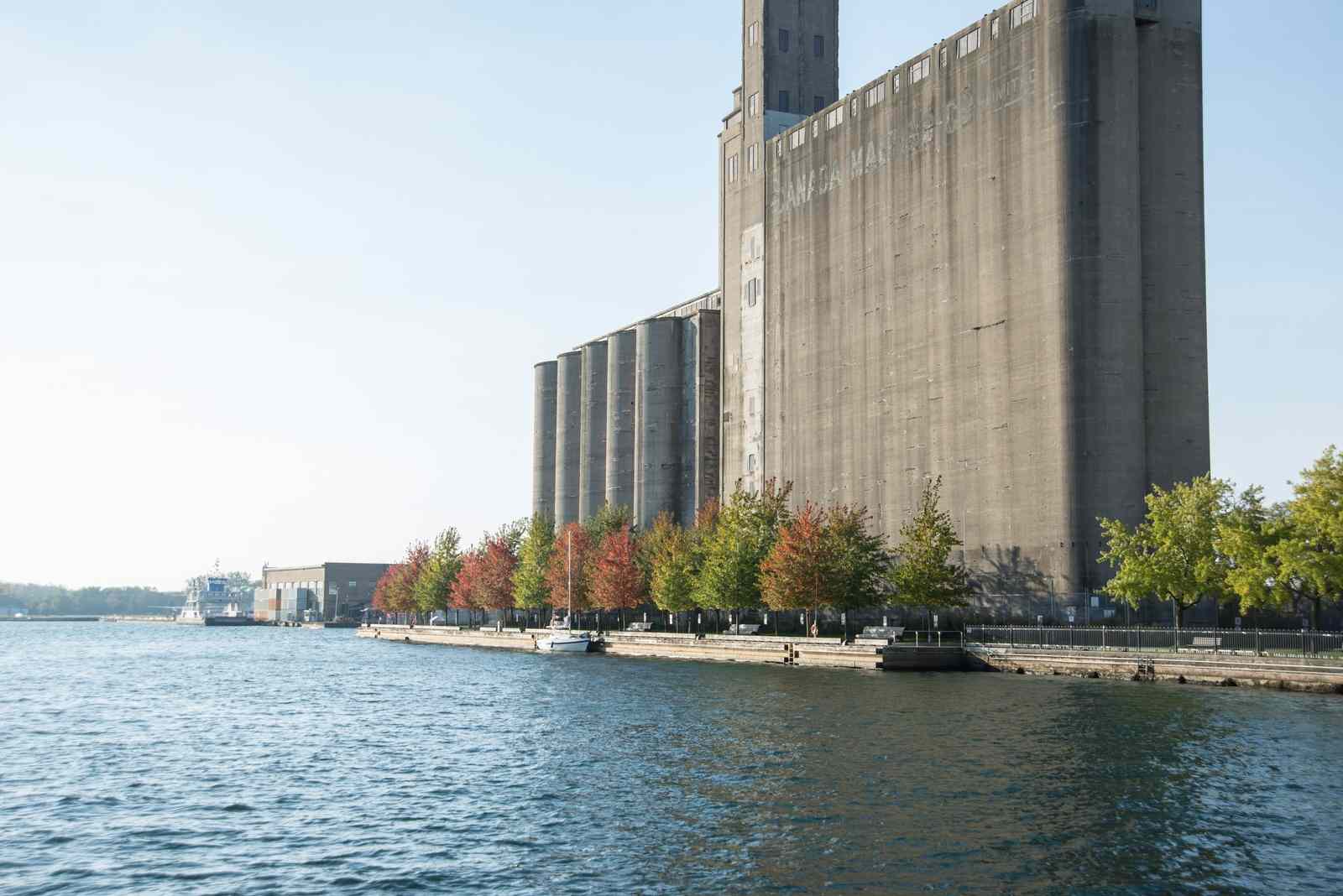 While sampling various locations in the summer of 2016, Lake Ontario Waterkeeper discovered extraordinarily high levels of E. coli at Bathurst Quay. They added this location to our twice weekly sampling program in efforts to collect more data and get a better understanding of the slip.

This slip is the center of recreational water use in the Inner Harbour. It is the home of the Harbourfront Nautical Centre, where they offer lessons for canoeing, kayaking, sailing, and powerboating. There is also the opportunity to rent boats from this location. 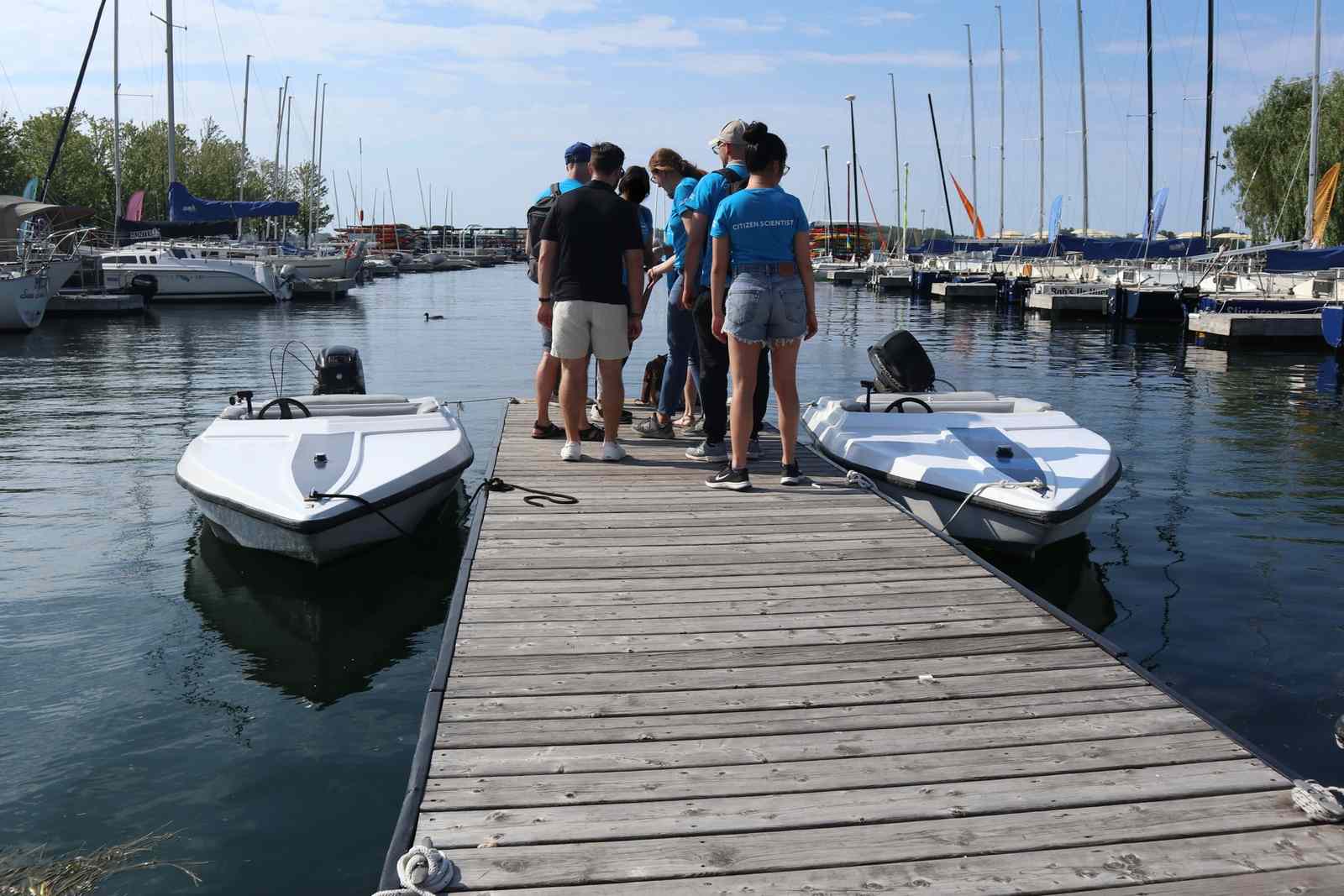 A combined sewer outfall is located here, stretching out from the centre of the slip.

Marina Four is a well-protected slip that sits between Rees St. and Lower Simcoe St., right in the heart of the Harbourfront Centre. It is adjacent to the Concert Stage, and under the Amsterdam pedestrian bridge. While not a popular swimming location, it is extensively used by boaters. Many of them also call the marina home and live on the boats they keep docked there. 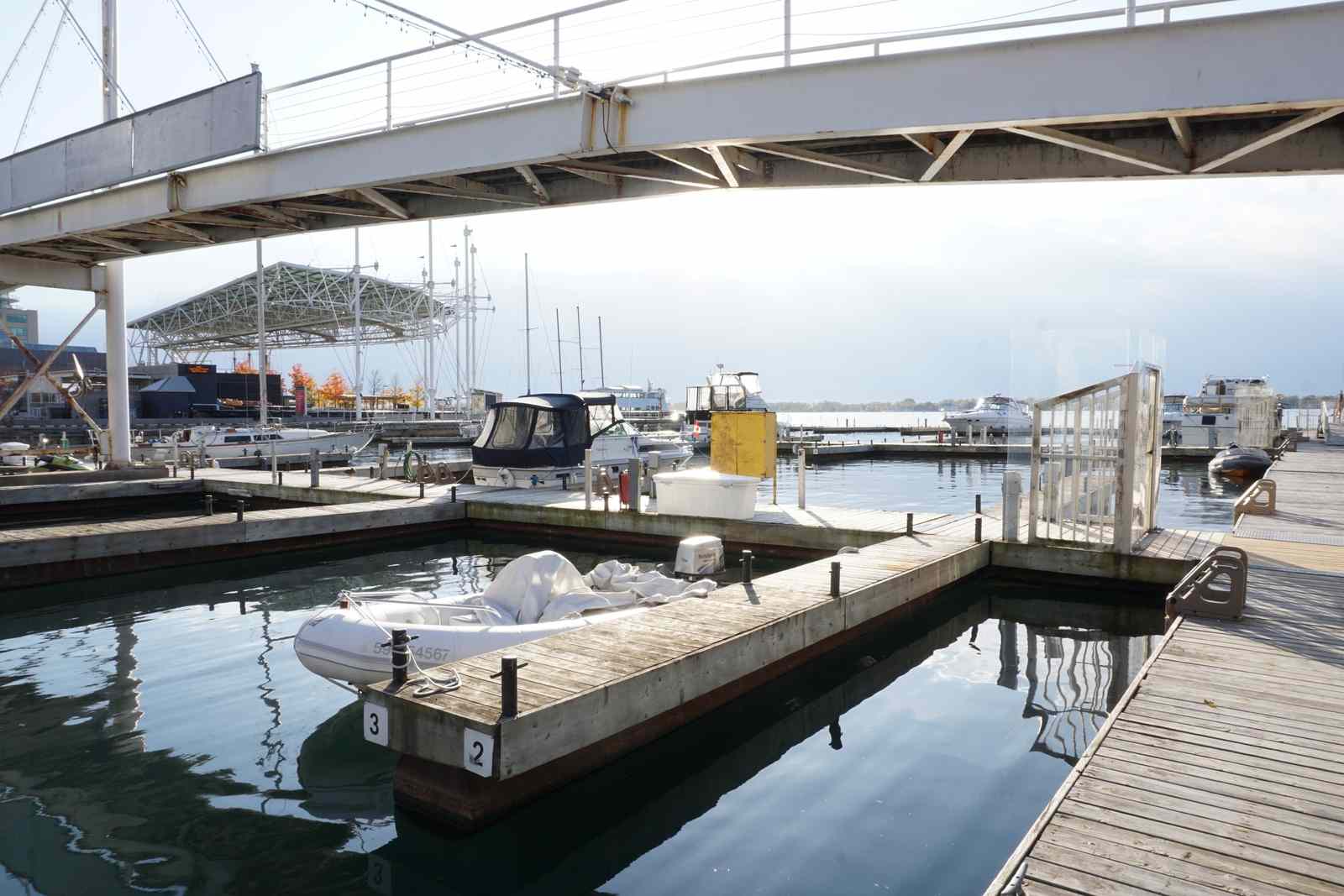 A combined sewer outfall is located in the northeast corner of the marina.

The Island Sampling Team is made up of residents of Ward’s Island. 2019 marked the highest water levels on record for Lake Ontario, which caused no shortage of difficulty for the Ward’s Island residents. But, along with piling sandbags and watching the water levels for breaches with their neighbours, this dedicated team continued to sample and swim in their local waters all summer long, getting the samples safely to the mainland for Elise and Alysse to process. 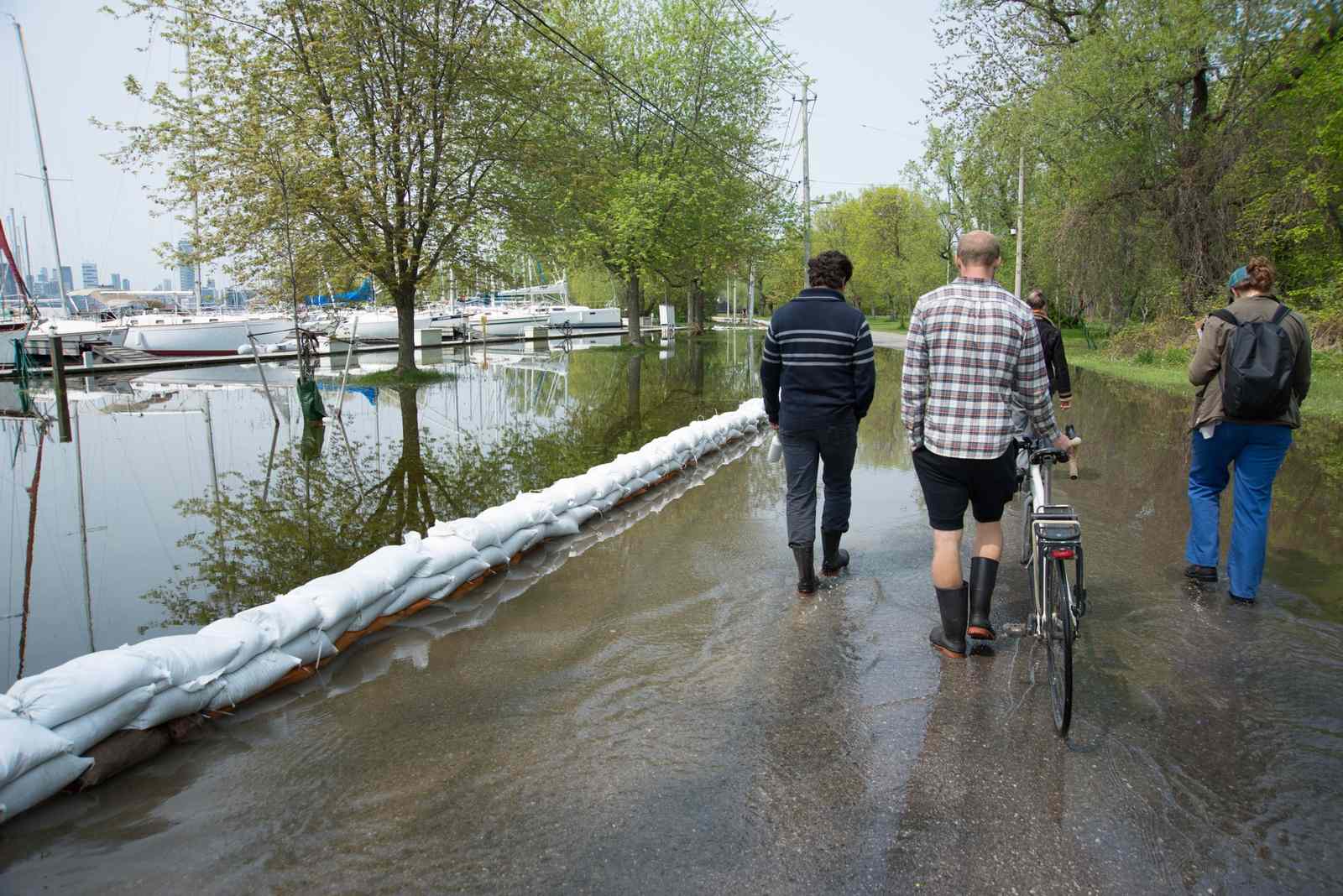 There are three locations that were monitored by the Island Sampling Team on Ward’s Island:

A popular place to access the water is the freshwater lagoon named Sunfish Cut, right next to the Algonquin Bridge. On any given day in the summer, people are seen Stand Up Paddleboarding, canoeing, swimming, and relaxing in the water. It is an easy place to launch a canoe or kayak and adventure up the lagoon. Make sure to keep your eyes and ears open, as you will see plenty of frogs, birds, and fish on your adventures in this area. 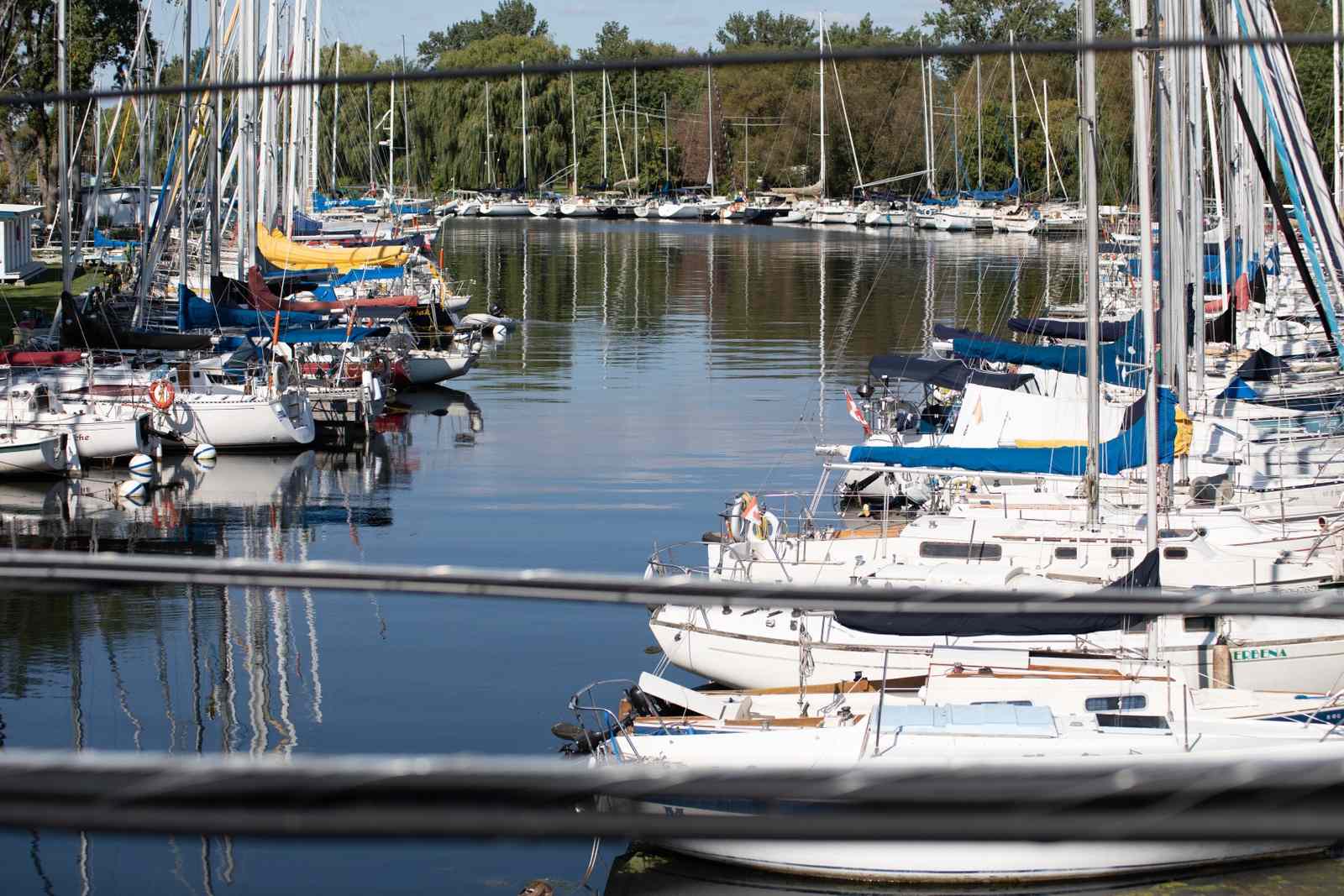 Snake Island is a popular spot for recreational water users on Ward’s Island in Toronto. There are wonderful secluded beaches located on Snake Island and many opportunities to take a dip in the cool fresh waters of the lagoon. 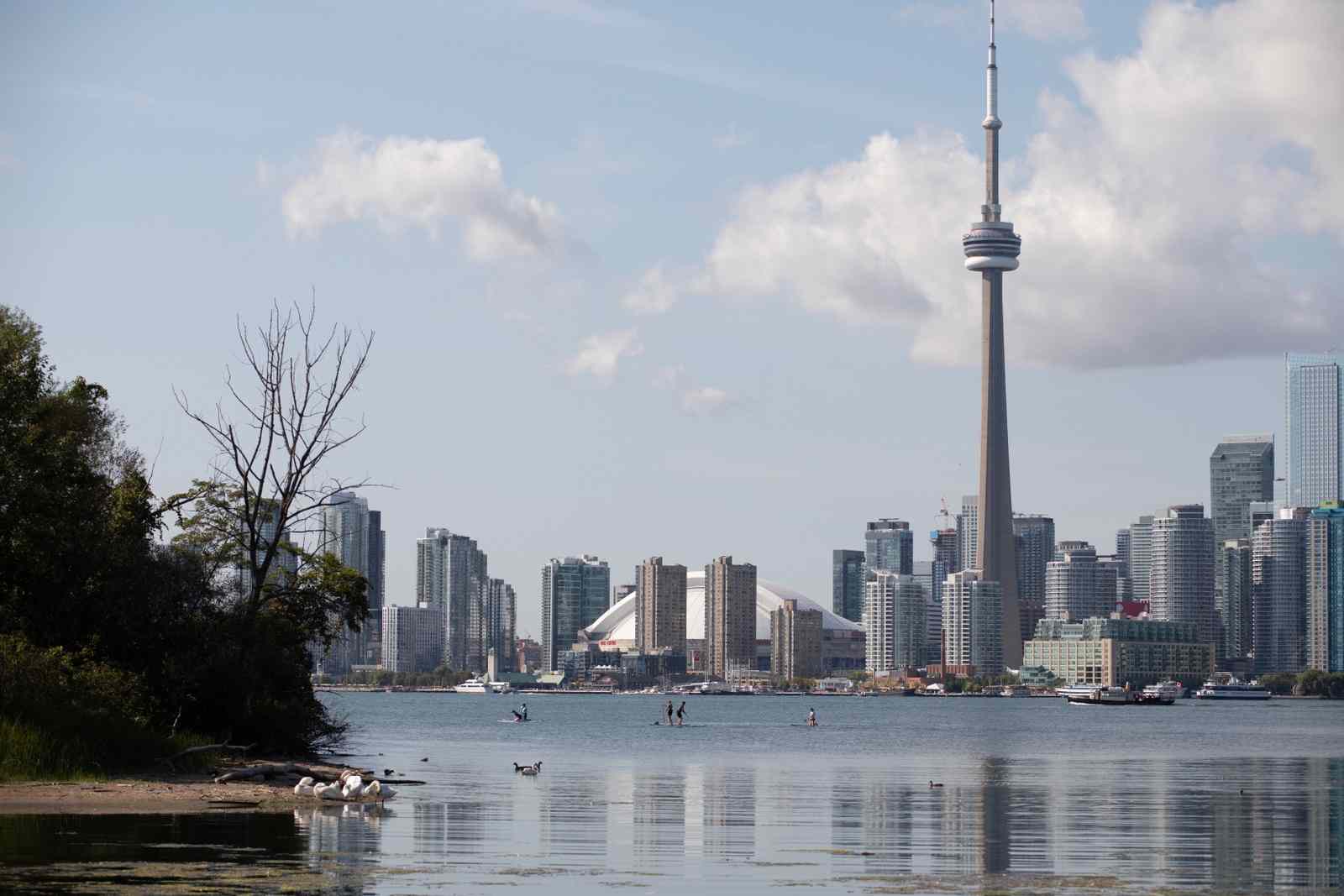 Ward’s Island Dock Beach is a beach facing the Inner Harbour of Toronto. It is a popular spot for recreational water users on Ward’s Island. In 2019, Lake Ontario reached historical water levels, and this beach was submerged underwater. 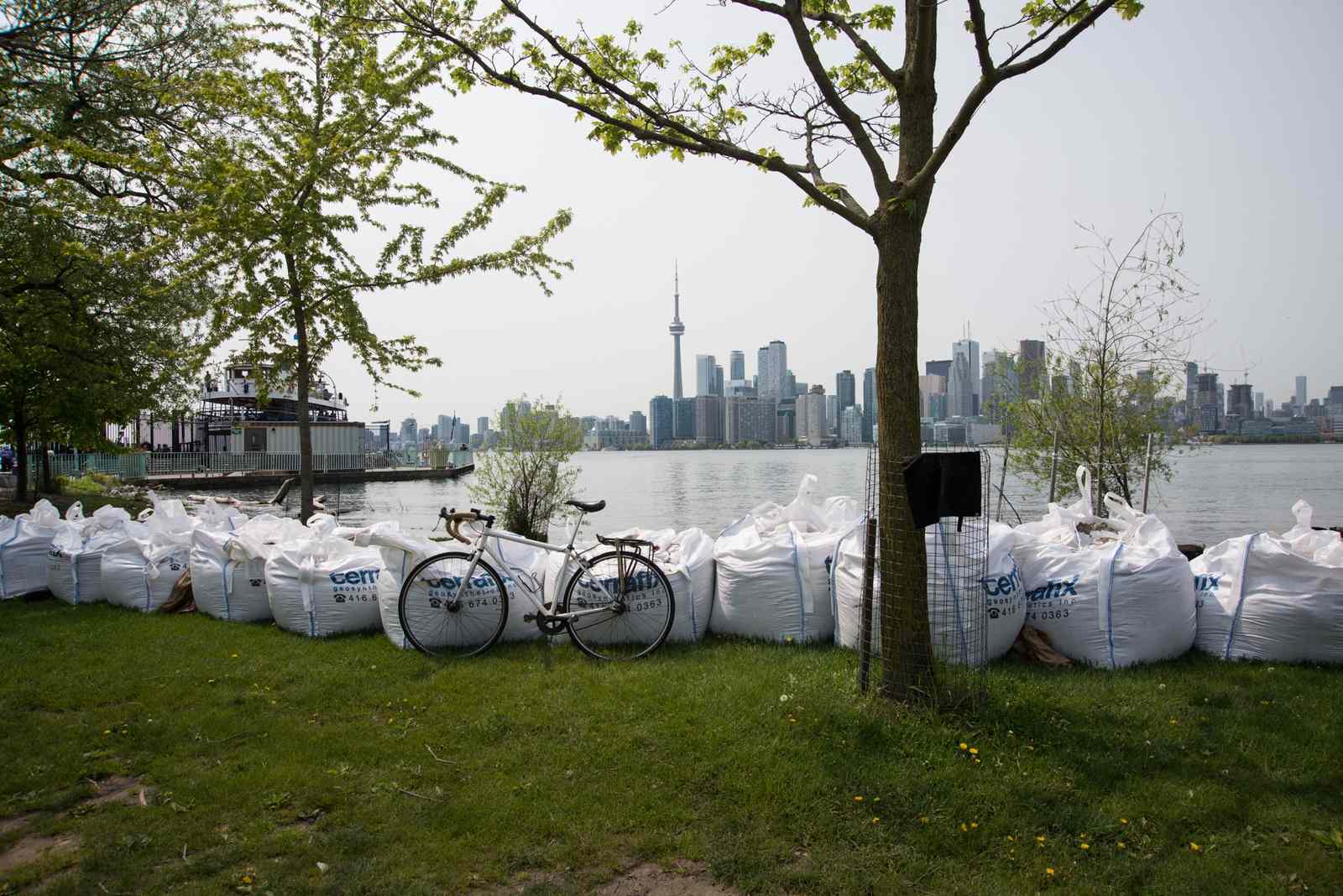 The beach was lined with sandbags as a result of the high water levels in 2019. Credit: Jessica Gordon

Part of a network of small peninsulas stretching out into Lake Ontario, Humber Bay Park West is a beautiful spot on the city's waterfront. The rocky beach where the Toronto Hub monitors, is a very popular scuba diving site, especially with beginners. Trails behind the beach make for good walking and bicycling routes. This side of Humber Park is home to a few boating clubs and docks as well. 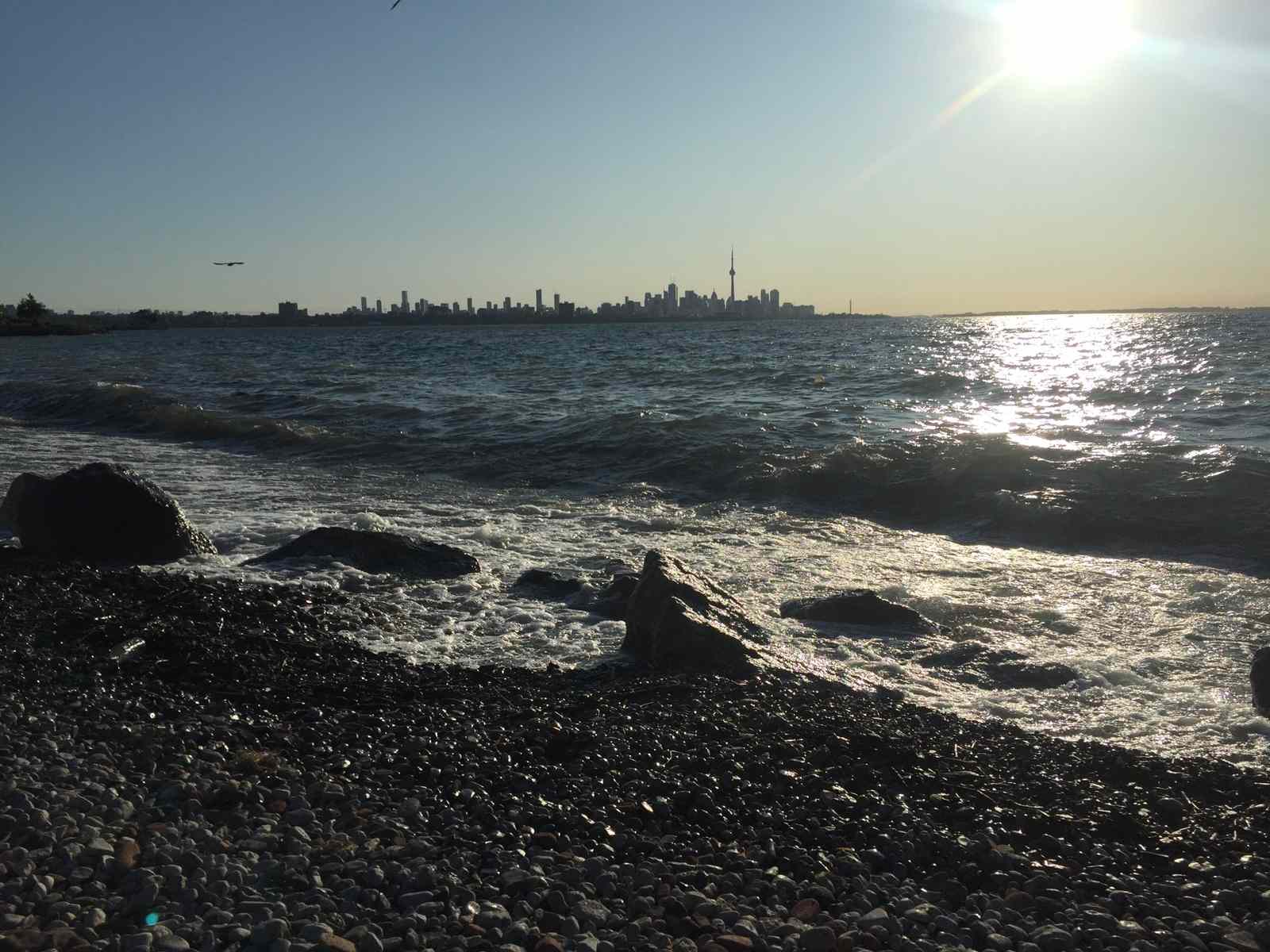 Water quality concerns at this site are tied to its close proximity to the Humber Wastewater Treatment Plant and to nearby combined sewer outfalls.

This small pebble beach is located on the west island of Ontario Place and provides beautiful views of Lake Ontario. The Ontario Place islands make up an iconic waterfront park in Toronto. Lake Ontario Waterkeeper feels that Ontario Place has huge potential to become an incredible place for people to get into the water, much like the Gord Edgar Downie Pier at Breakwater Park in Kingston. 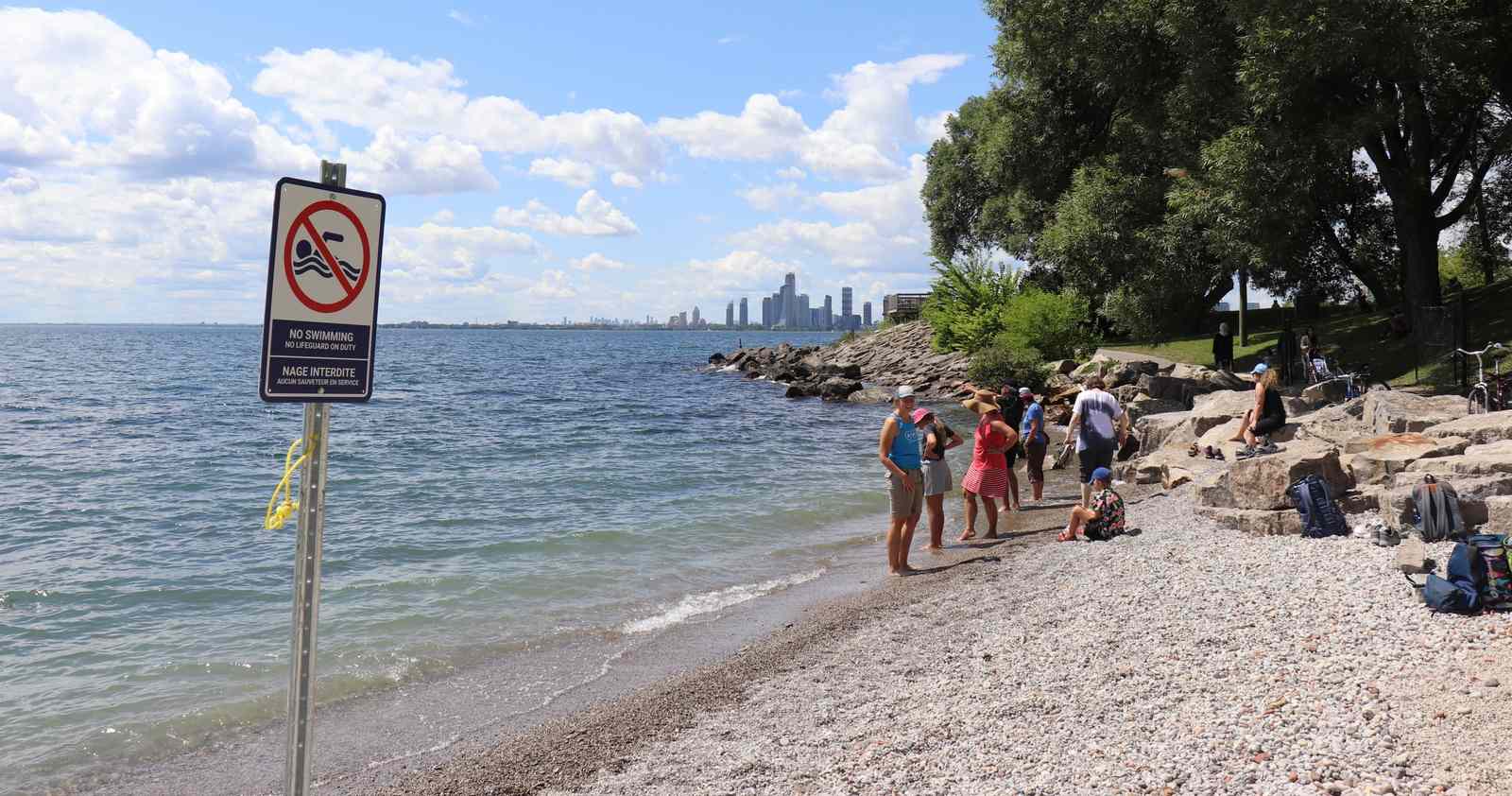 The site doesn't meet the criteria for an official beach in Toronto (yet). The water is not as accessible as it should be and some debris/ fill may make water entry and exit hazardous for swimmers. Ontario Place is discouraging people from swimming there, even though increasing numbers of people are seeking it out. 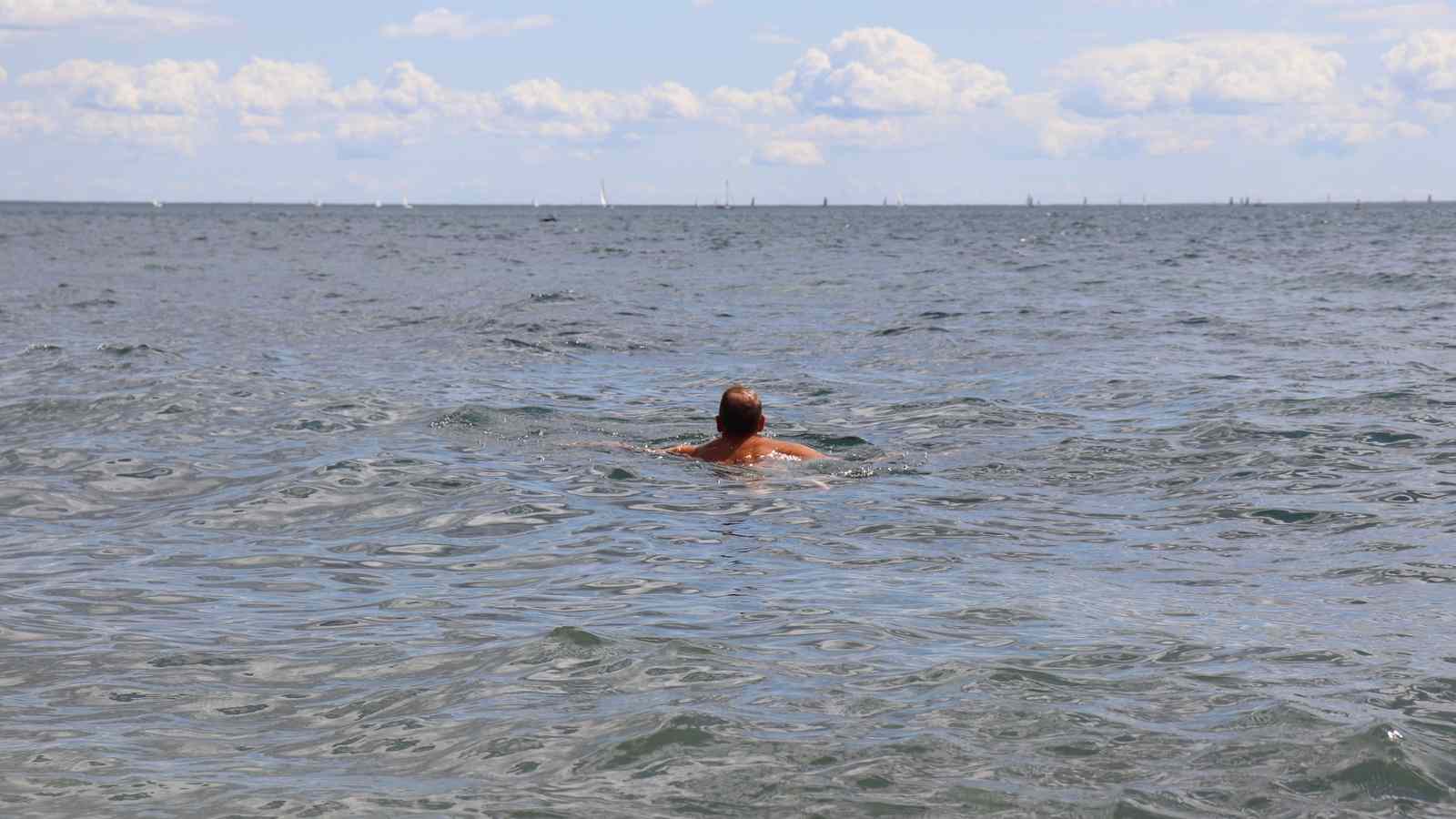 Lake Ontario Waterkeeper began monitoring water quality here in 2019 and is looking at water quality data to see if the site would be suitable for swimming.

You can learn more about the Toronto Hub or find out how you can get involved by reaching out to them.

Read Citizen Science in the Great Lakes for more about how the project came to be.