Have you ever looked at a lake or a river and thought "I wonder what's in the water?"

Well, thanks to Kat Kavanagh and her Water Rangers testkits, you can actually find out what's in your local waterbody. You can become a citizen scientist! 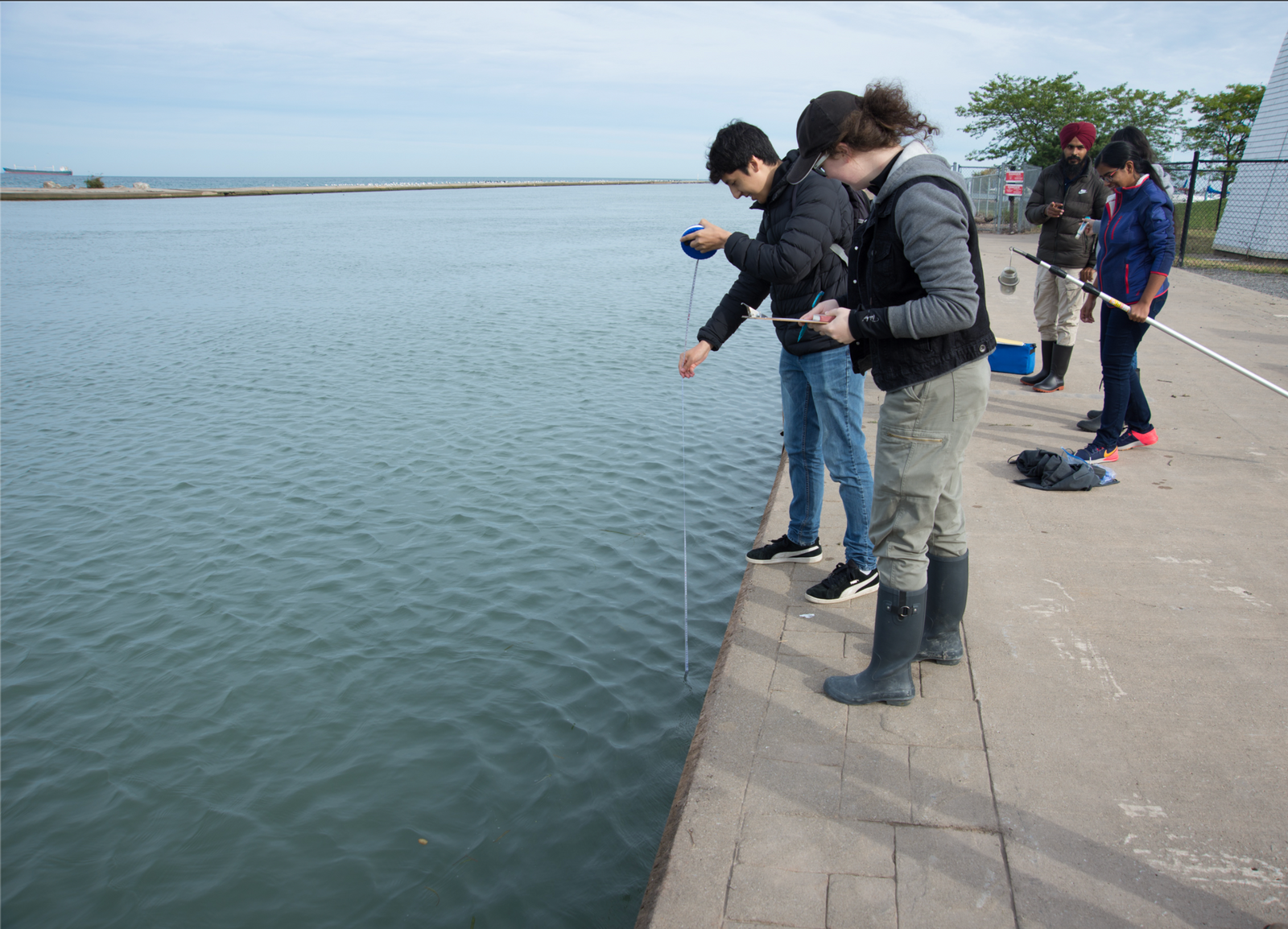 Kat Kavanagh is the executive director and a co-founder of Water Rangers. Water Rangers is a non-profit focused on inspiring the public to get involved in water conservation by collecting water data around their local rivers and lakes.

Groups and individuals can purchase Water Rangers testkits that allow them to become citizen scientists in their very own backyard. These kits allow anyone to test and record water data themselves in the Water Rangers app (free to download for iOS or Android).

Kat and her co-founders have created an online data platform that shares the information collected by citizen scientists within the Great Lakes region and across the country.

The Swim Drink Fish team spoke with Kavanagh to learn more about why she started such an awesome initiative.

Why do you care so much about water?


My Watermark is Lac McGlashan in Quebec.

I grew up visiting a cottage in Val-des-Monts on Lac McGlashan. It has been in the family since the 60s. We would spend our whole summers up there, playing in the stream, swimming, boating, and sometimes just reading on the dock; just being there next to the water. It is the place I love to be.

When my dad retired, he rebuilt the cottage as a permanent home and my parents live up there now. Coming back “home” is always coming back to the lake. 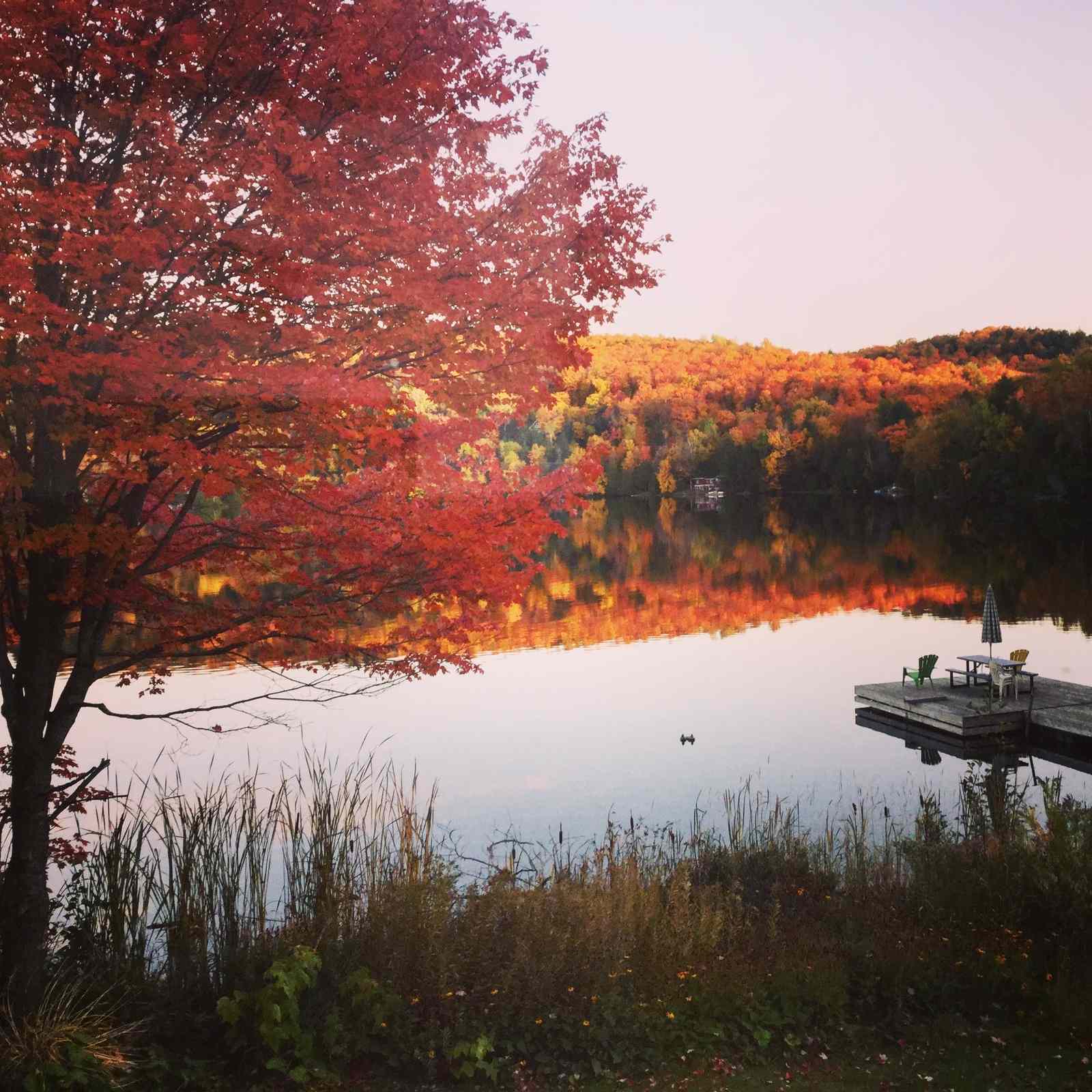 
Where did the idea for Water Rangers come from?


In 2014, I moved up to the cottage for a short time. During that time, my dad was doing water testing on the lake. In the spring, phosphorous levels are tested when the ice melts. It is cold and it’s not something you do for fun, it’s something you do because you really care.

My dad realized, living near a lake, that he needed to take care of it. He felt that in order for us to know the health of our lake, we needed to test it regularly. So he volunteered to do it. 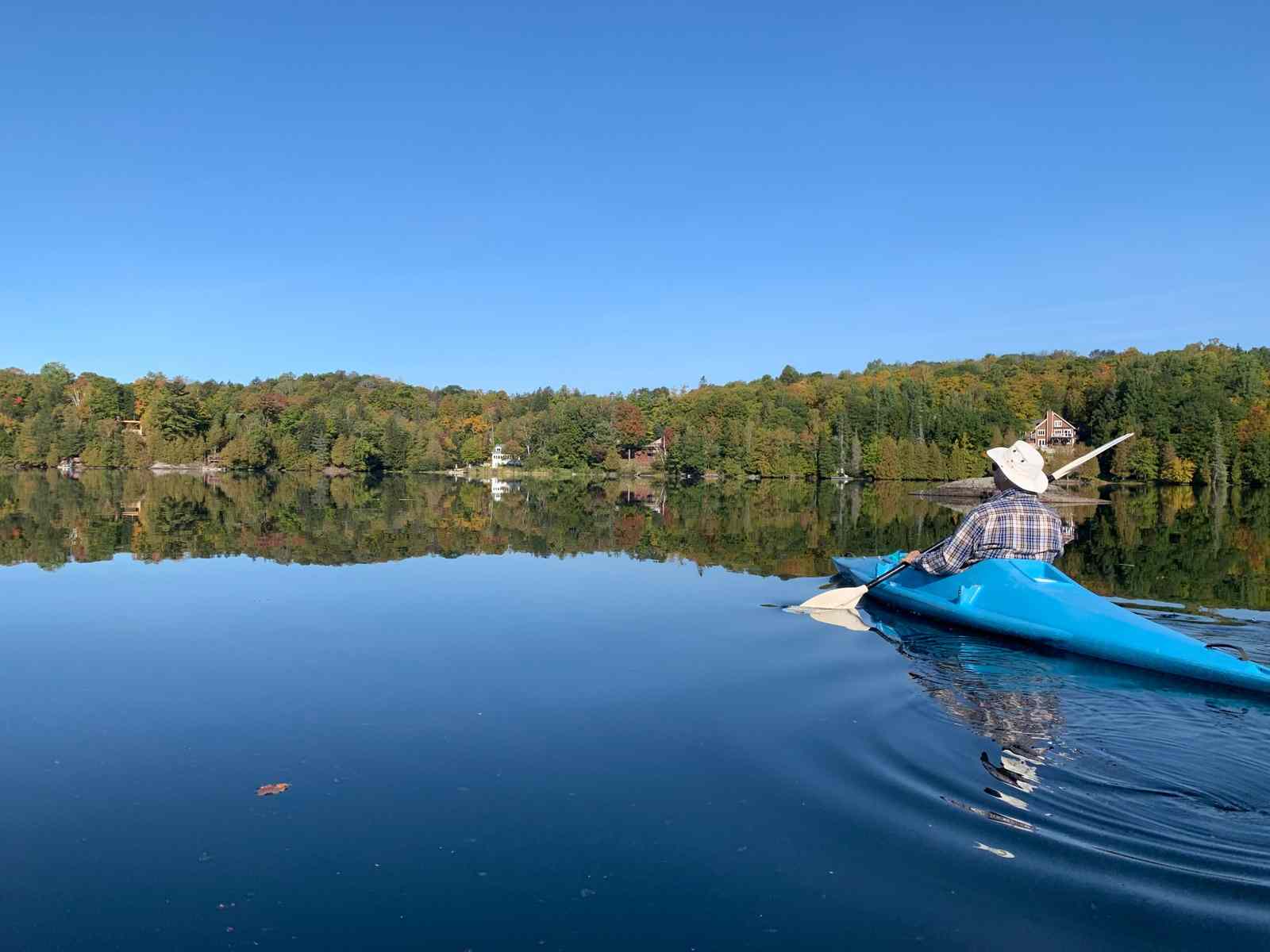 I went out with him to do the water testing and when he got his results back, I asked him what they meant. He only had a vague idea, even though he’d been doing this for 15 years. It was just a bit too scientific. The data was presented on a website, but not in an accessible format.

I thought that I could use my skills in user experience design to make something that is understandable, joyful, and easy. Something that gets more people involved in the health of their water, because there are so many barriers right now.

So, in 2015, myself and my two co-founders, Mark Dabrowski and Ollie Kavanagh (who is also my husband), participated in AquaHacking with our idea for “Water Rangers”. We won!

Our first prototype was for Ottawa Riverkeeper to help them coordinate their volunteers, but we had a grander vision. Now our kits are being used internationally - it's absolutely amazing. 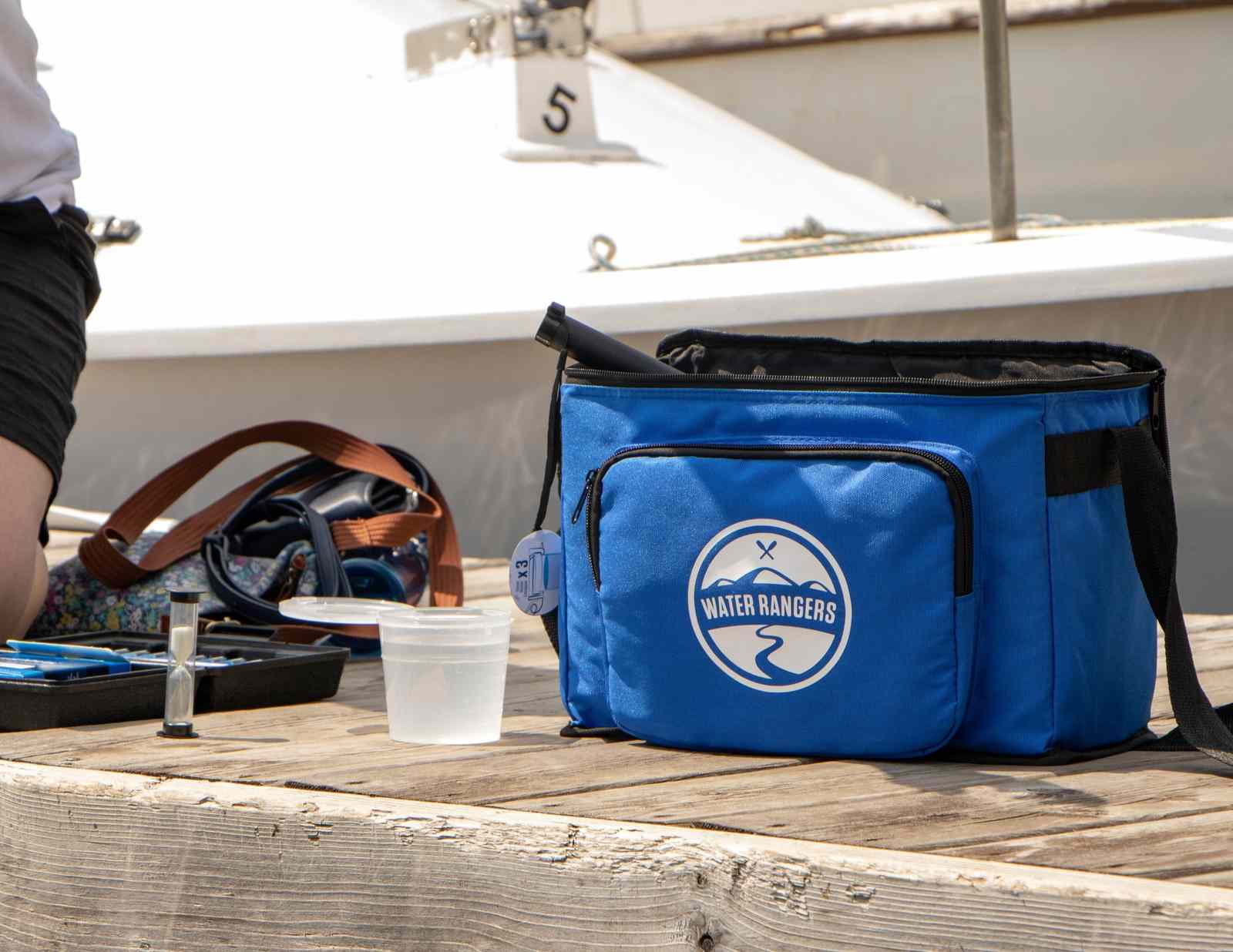 
Why is it important for people to get involved and become citizen scientists?


“People think it’s not their job, the barriers are too high, and they don’t participate in the conversation.”

Using the Water Rangers kits helps foster the idea that water testing is normal, that this is what you do. You go to the water and you take care of the water. Creating that moment of connection to nature is huge to me. Then, if a community of people say that the state of our local waterbody is unacceptable, it becomes unacceptable and it sets a new precedent.

It’s amazing how many people - especially students - have learned things in school, but it’s not until they actually do a real experiment that there comes that moment of understanding. It’s like a lightbulb going on.

One of the things I get people to do is touch the water and guess the temperature. I once had a group of grade 11 students out with me in the early spring, and one of them guessed “-20°C”. It was running water, -20°C isn’t actually possible and when we tested; it was actually 8°C. It really showed me that these students don’t often get the chance to apply what they’ve learned in school. Learning theoretically is very different from learning through experience. 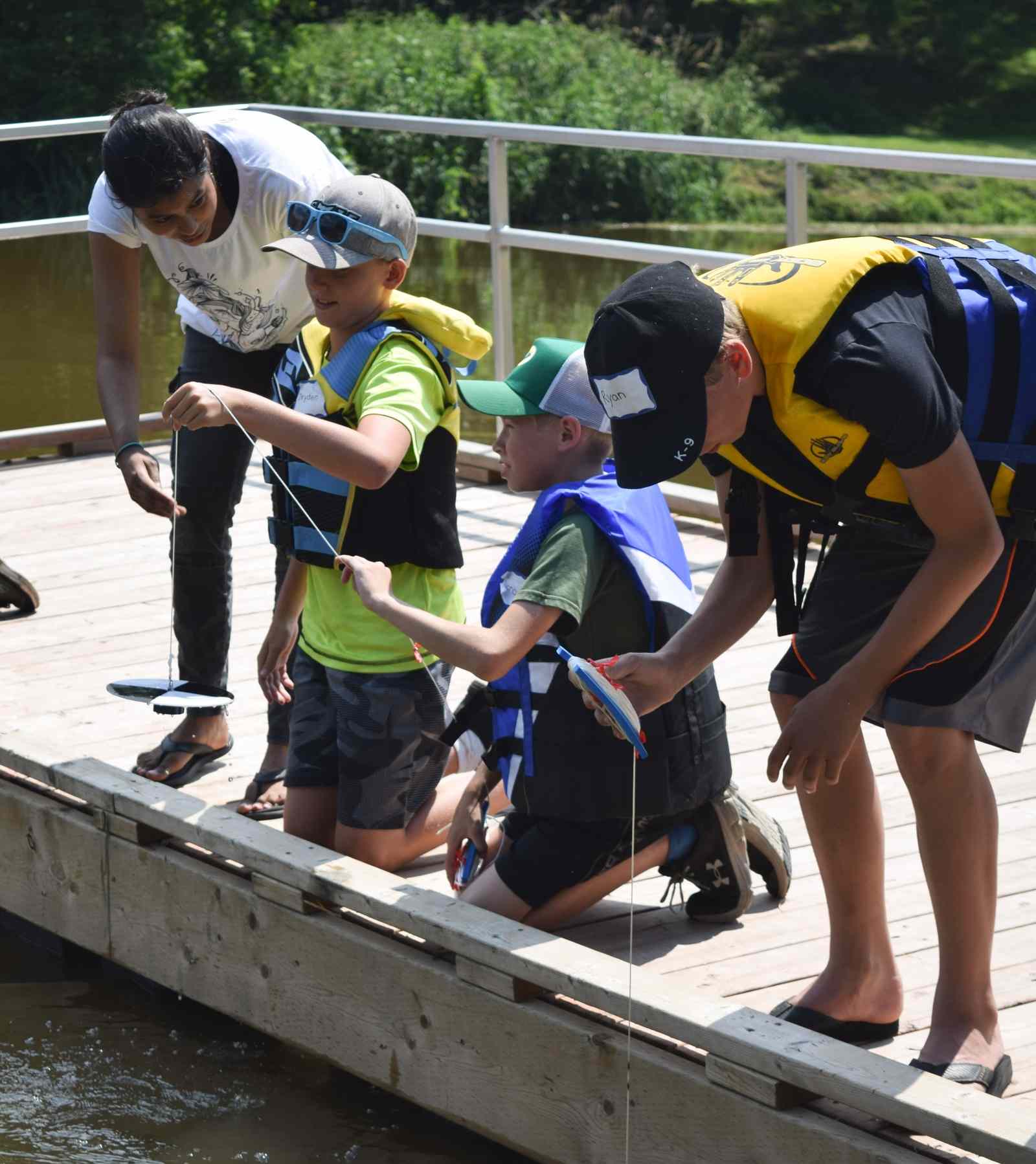 I don’t come from a science background, and I actually think that’s good. What I’m always trying to do is curate what scientists are saying and then I double check with them. I simplify the language so that the first time user understands.

How do you encourage scientists and researchers to use the citizen science data?


We’re trying to get to the point where the data that we collect with our kit is seen as useful information for scientists. Some scientists already find it valid, but we’re trying to meet quality specifications in order to address this innate distrust of “untrained” citizens.

To do this, we’re teaming up with more and more universities to write peer-reviewed research papers. We gain validity through rigorous research, making sure that we share data for use in their studies. We also send data to municipalities, letting them know: this data was collected by your citizens. 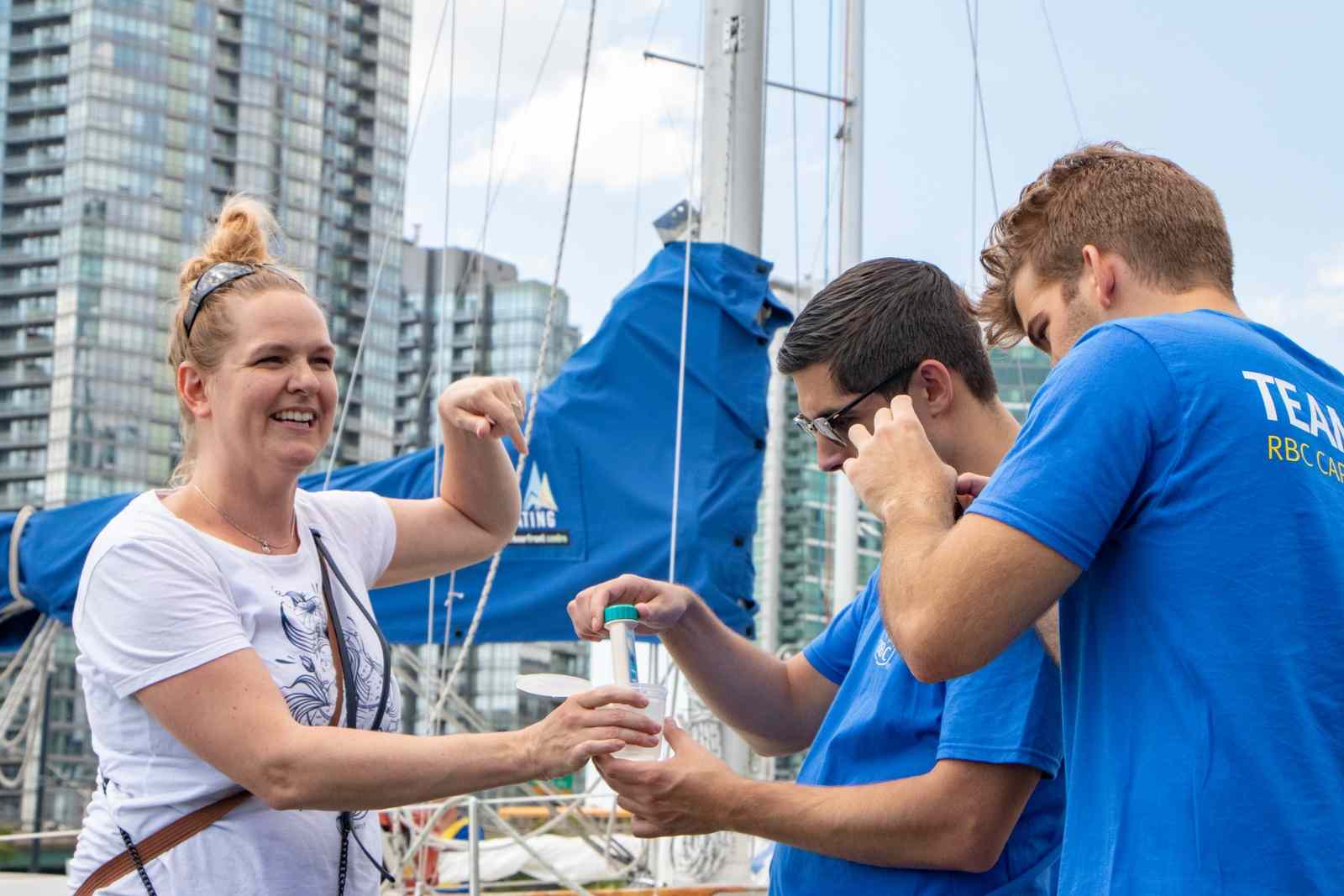 One big project that we are working on is determining if the citizen science data, specifically conductivity, could be a predictor of a stressed area. If we can predict what the conductivity should be then we can indicate if an area is under stress with our data. It would be great if, instantly in that moment of understanding, you knew if the results were good or bad for your waterbody.

The conductivity metre measures the water’s ability to conduct electricity. This is an indirect measure of ionic content (things like chloride, nitrate, sulfate, sodium, magnesium, calcium or iron) and every body of water has its own unique conductivity level based on its geography. Find out more here!

Why do include the specific tests you do in the kits?


After Aquahacking, I went out in the field with some of the conservation authorities’ lake and stream sampling programs. I started looking at what parameters they were testing because (obviously) these are very smart people who have decided what tests are the most important. 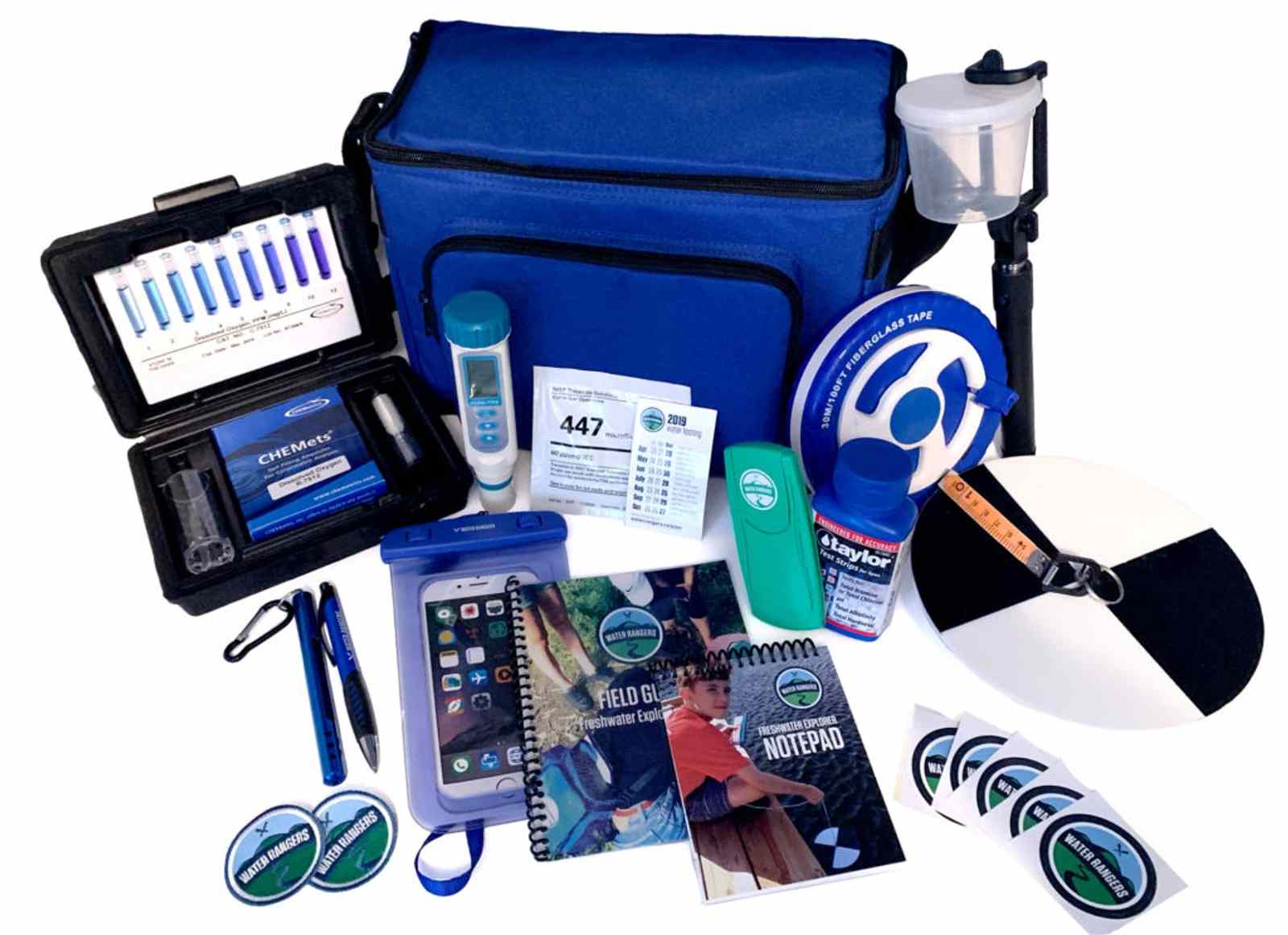 I started filling our Water Rangers kit with those tests that would allow users to get results right in the field. In the Freshwater Explorer Testkit you’ll find test strips for things like pH and a meter for testing conductivity. I wanted to avoid tests that required a lot of precision and those that were easy to do incorrectly and get false readings. This is why we have a pH strips instead of a pH meter (which would need to be calibrated every week). 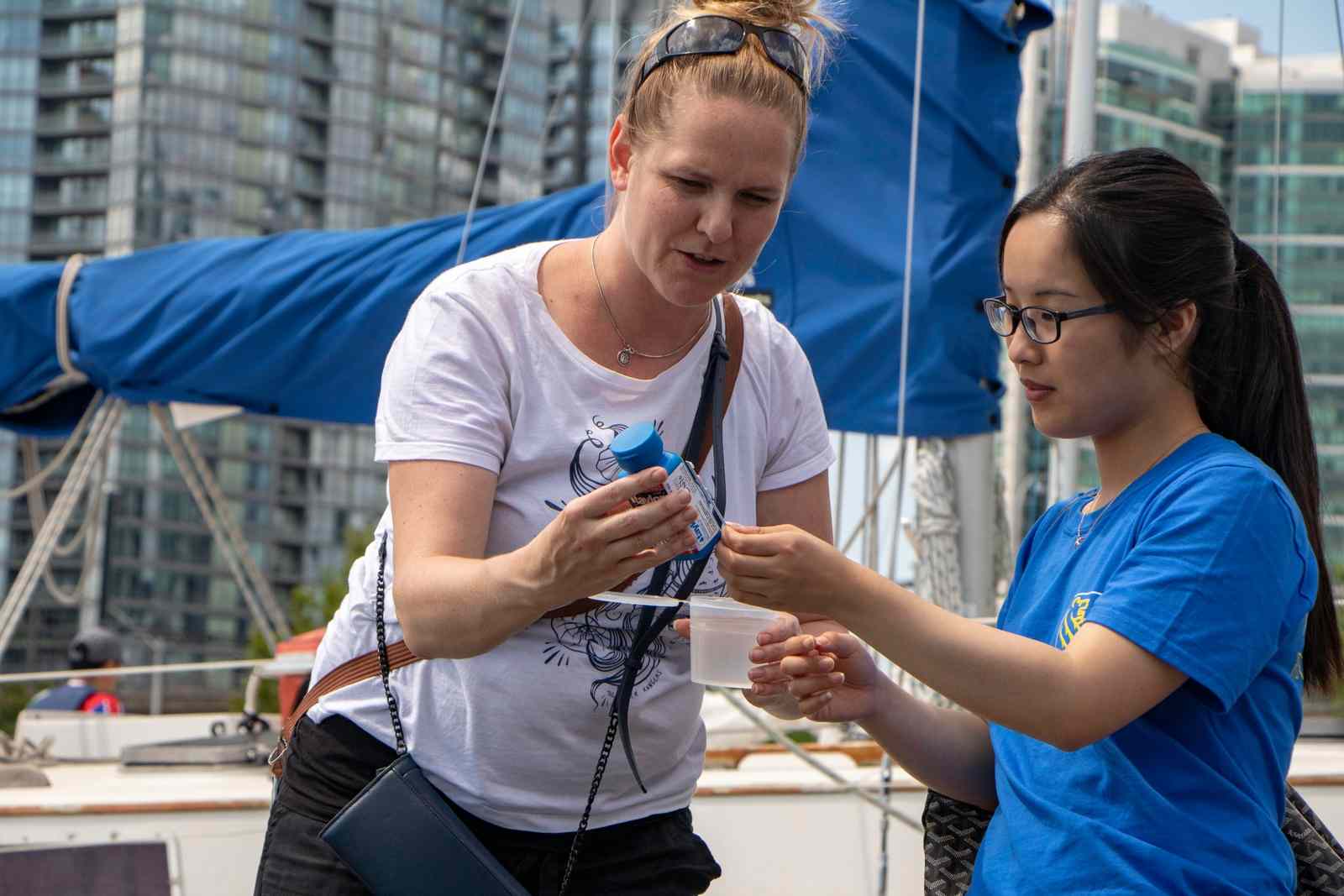 I try to strategically choose tests that have a great user experience and to fill the kits with tests that are easy to explain and give meaningful insights into the health of the waterway. A lot of people give us feedback and we roll that into the newest version of the kit. The Water Rangers kits are very much user-driven design.

Here Kat goes through the whole testkit explaining the equipment and the test it conducts.

What’s next for Water Rangers?

The dream is to have active citizen scientists protecting their local water bodies across Canada and, eventually, around the world. People should feel like they have the tools and knowledge to do that.

There are a lot of groups out there that already do incredible work and have been doing it for 20 odd years. What I’m trying to do is create space for groups that don’t have the money or capacity right now, to help get them started. In other words, I want to help create a gateway to bigger stewardship and access to science.

This doesn’t replace the work of scientists. But, citizen scientists are the eyes and ears on the ground. They’re going to notice when their waterbody is different. Their testing will help establish baselines so that when things deviate from the norm, scientists can come in and do the work that they need to do. We all need to work together! 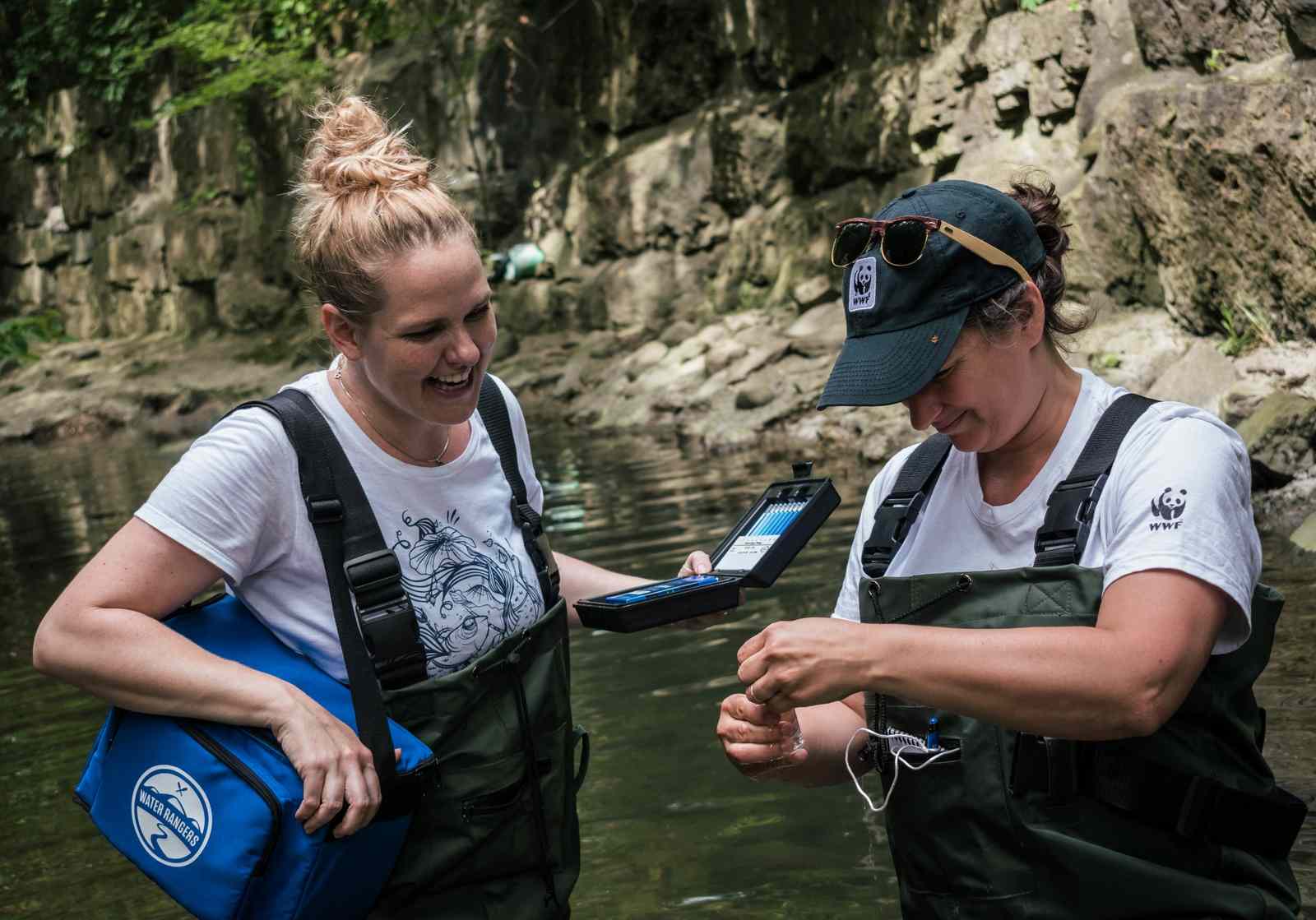 Interested in learning more about Water Rangers? Check out their Website. You can purchase your own test kit!

You can also learn more about Citizen Science in the Great Lakes and see how you can get involved.