It’s the 17th century. Father Paul LeJeune is standing on the shores of Lake Superior, watching as one of the First Nations tribes in the area fish.

As he gazes out over the turbulent waters, he sees the men pulling a curious creature out of the water. The creature is over a meter and a half long, with a lizard-like body and the head of a turtle.

The fishermen seem unsettled. They quickly toss the creature back into Lake Superior’s churning depths.

Later on that night, Father LeJeune learns that the strange creature the men had caught was not a fish at all, but a monster, capable of causing catastrophic storms. In releasing it, the men hoped to escape its wrath.

This was the first documented sighting of the extraordinary creature that lurks in the darkest parts of Lake Superior. 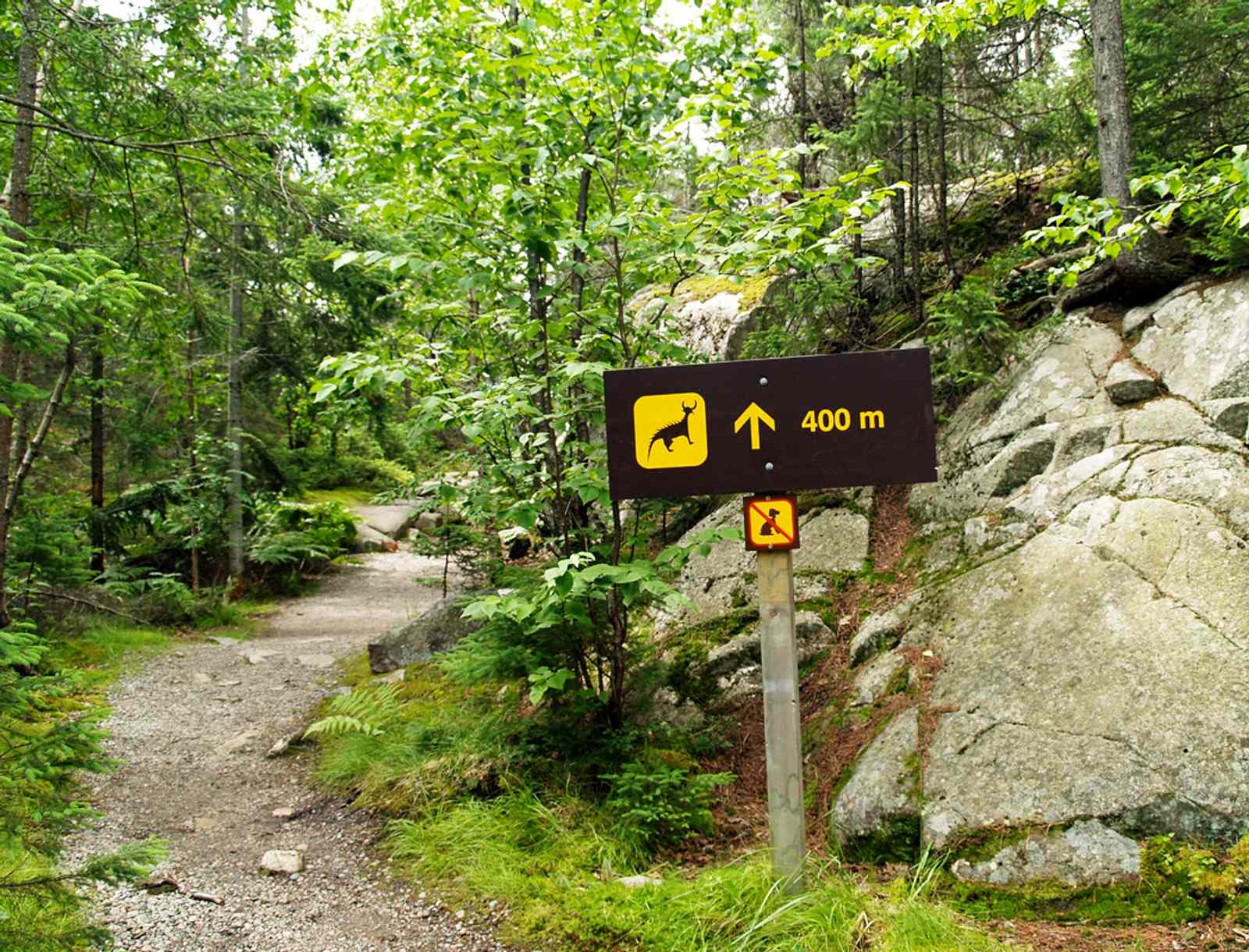 Mishipeshu is an Ojibwe water creature, also known as the underwater panther (or in direct translation, ‘the Great Lynx’). The creature is also affiliated with the Algonquin, Ottawa, Menominee, Shawnee, and Cree tribes.

Mishipeshu dwells in the depths of Lake Superior, the largest, cleanest, and wildest of all the Great Lakes. In terms of surface area, Lake Superior is the biggest lake in the world.

Lake Superior holds more water than all four other Great Lakes combined. Often referred to as an inland sea, the lake can produce waves over 9 m tall. It’s even a popular destination for surfers in the Great Lakes region.

Mishipeshu is said to live near Michipicoten and Manitoulin Island in Lake Superior, and is often regarded as a symbol of the lake’s power. Mishipeshu is able to cause storms, waves, and whirlpools.

The water spirit travels through underwater tunnels, speaking in a roaring hiss that sounds like rushing water. 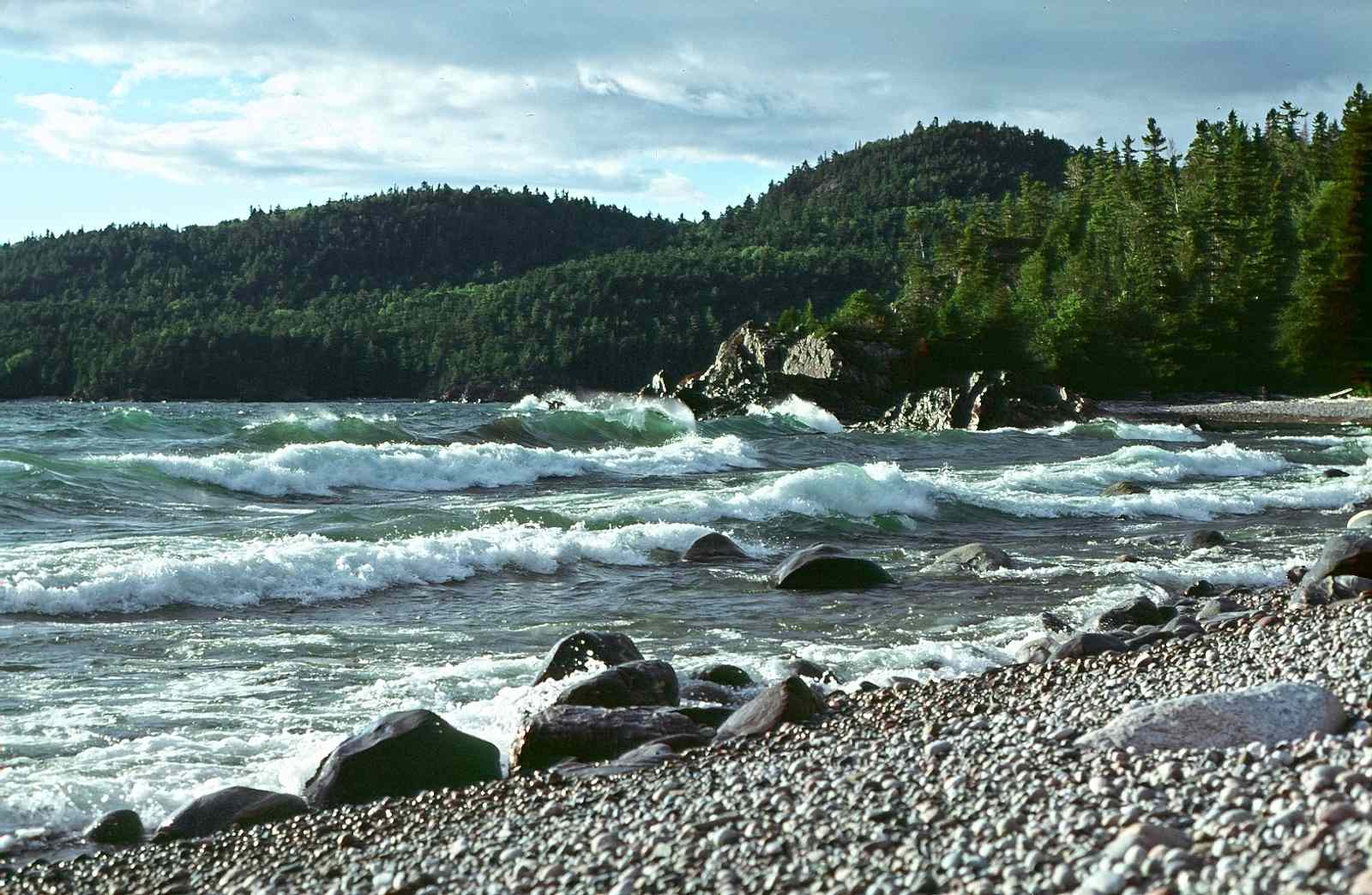 Mishipeshu is an amalgamation of many different animal parts. Sort of like a Frankenstein’s monster of all the animals you might find in the Great Lakes Region.

Some say Mishipeshu has the head and paws of an enormous cat, the horns of a bison, the scaly body of a snake (or the feathered body of a bird), a spikey back and tail, and any other number of contrasting characteristics.

Some say he is about the size of a lynx or mountain lion, others say he is unfathomably large. 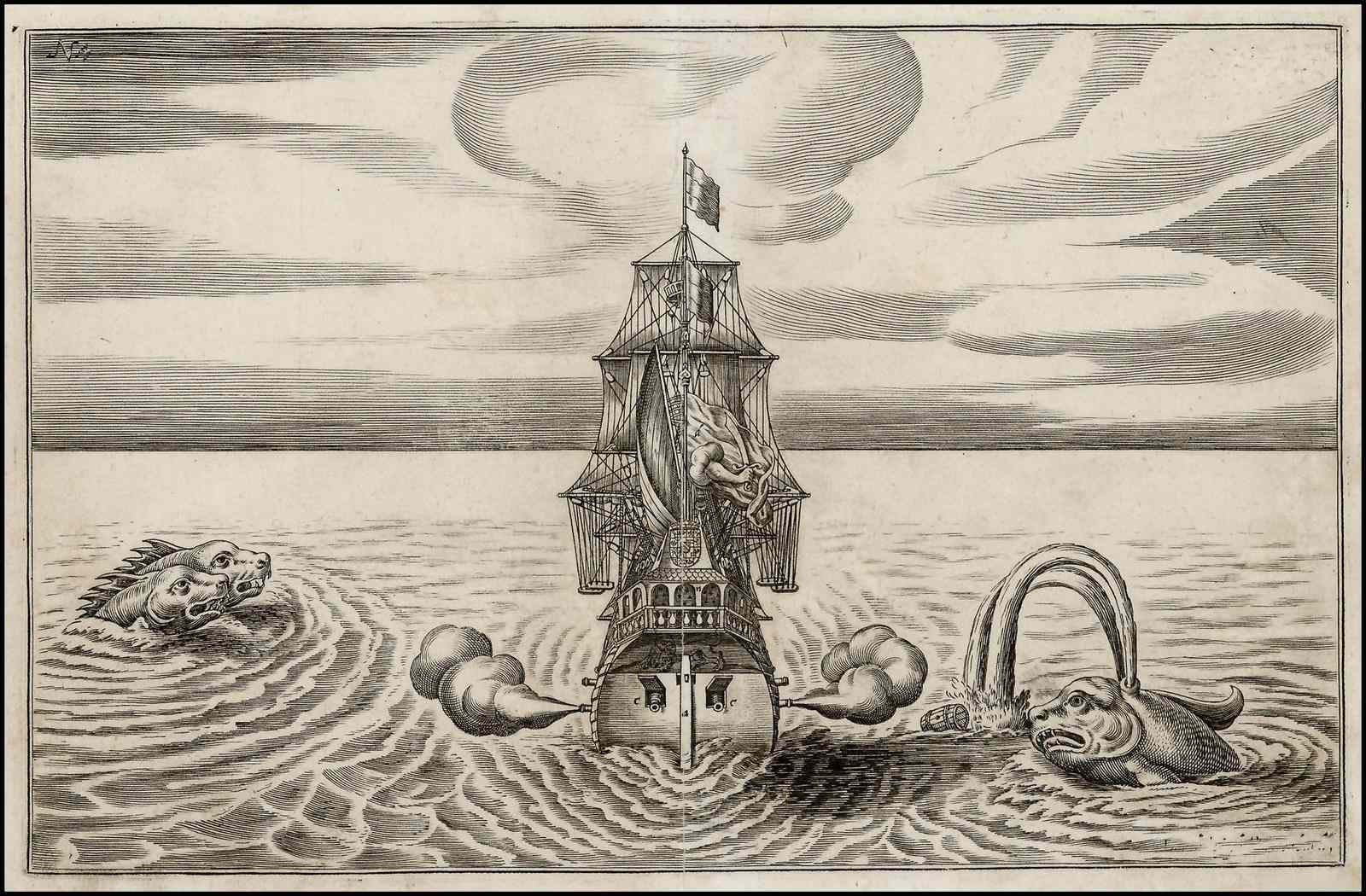 Mishipeshu is described as a cross between a cougar and a dragon, though descriptions vary. His shape is feline and he is amphibious, but he is reptilian as well.

Mishipeshu is usually considered a malevolent being (case in point: the terrified First Nations fishermen).

The creature passes the time by causing death and misfortune for those who awaken his fury, guarding copper on Michipicoten Island, and generating powerful storms.

As the mythology goes, Mishipeshu causes violent waters that wreak havoc on those unlucky enough to be in the lake when his temper strikes. The creature can cause waves, rapids, and whirlpools. He is even able to break the ice in winter so that people fall through and drown. 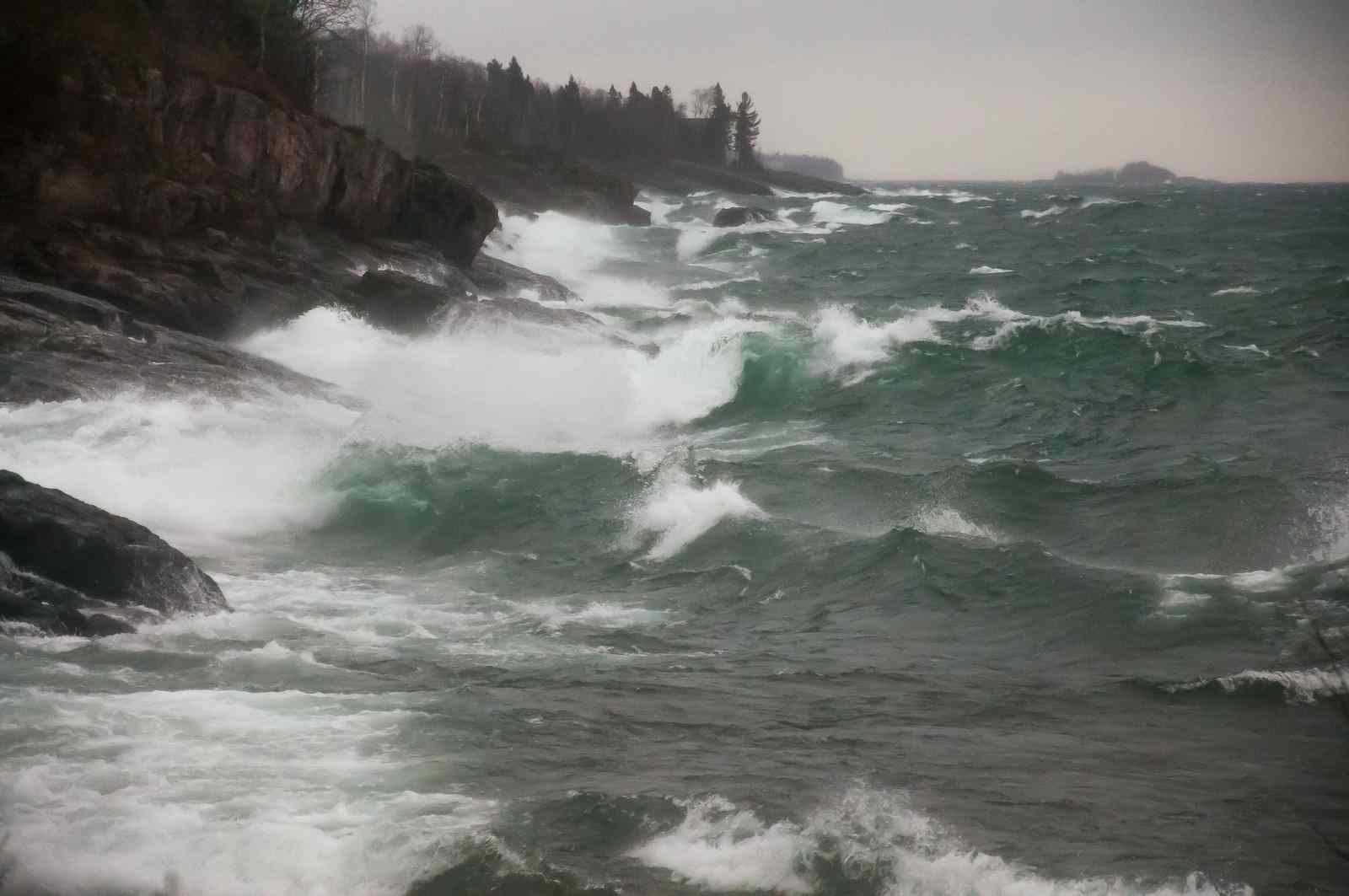 Who do you think you are, Lake Superior? The ocean? Are you really going to tell me that these waves aren't the work of a disgruntled lake monster?! | Credit: Phil Simonson (Flickr: Link)

Mishipeshu and other water-dwelling beings were generally considered bad-natured, though this is not always the case. They’re cunning and tricky, but they can be helpful, too.

If travellers offer Mishipeshu tobacco, he may allow them safe passage over the lake.

The Algonquians also regarded underwater creatures like Mishipeshu as bringers of protection, healing, and medicine (medicine bundles were often made of snake skin).

Dependent on the creature’s mood that day, these underwater beings could grant fruitful hunts, fishing, and food.

That said, Mishipeshu is usually… not very nice.

In 1897, one poor man endured the most intimate encounter with the vicious Lake Superior monster yet.

While yachting near Duluth, the man fell overboard and was attacked by a beast that constricted him like a snake. It squeezed him until all the air had been forced from his lungs and his eyes bulged. Three passengers onboard witnessed the harrowing experience. 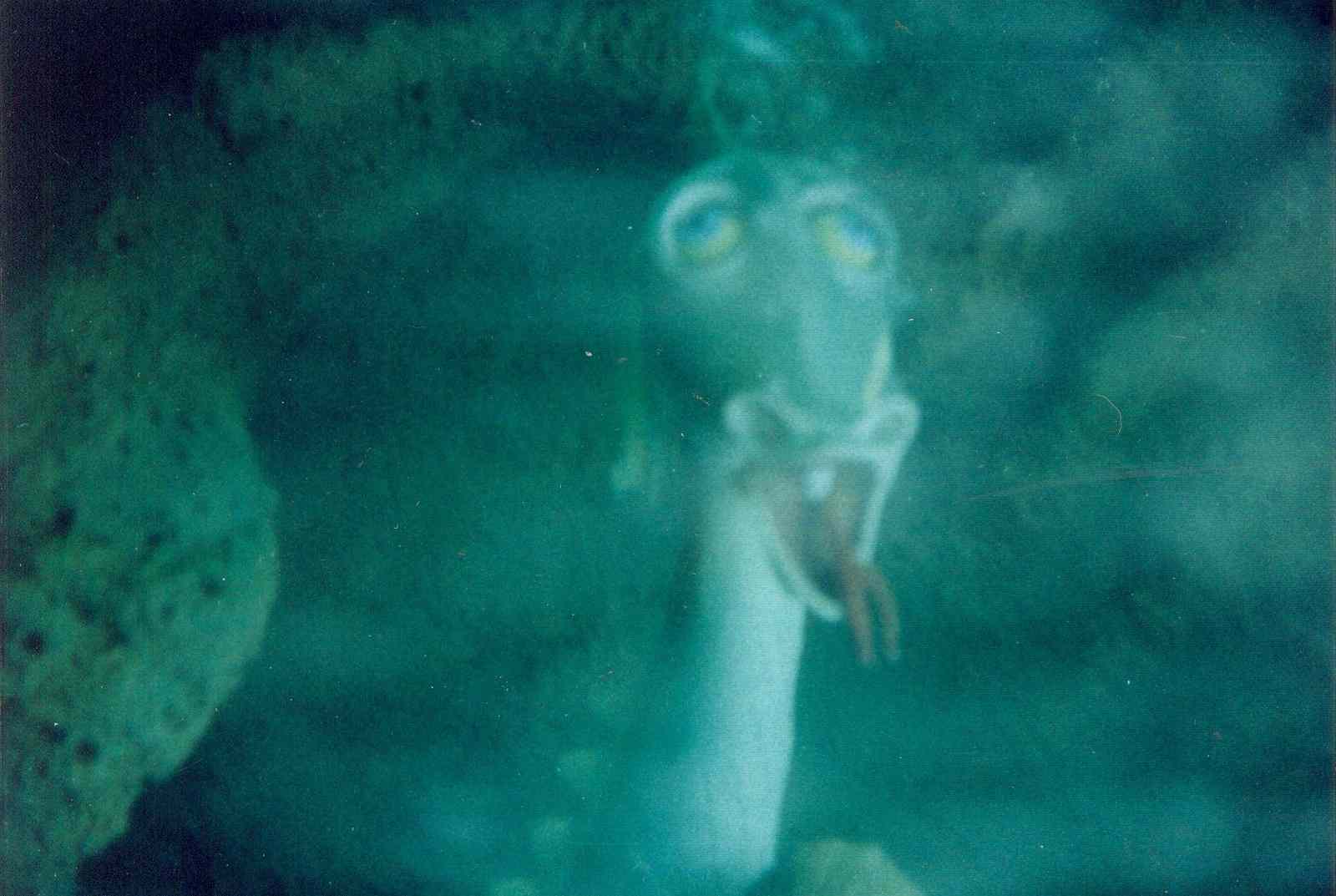 As far as we know, the man escaped the creature’s clutches. He returned to the boat shaken, but alive.

Accidents, drownings, and shipwrecks aren’t uncommon in the treacherous waters of Lake Superior.

Perhaps Mishipeshu is a way for people to make sense of the ruthless weather and resulting fatalities in the lake.

Particularly during the copper rush in the 19th century, many ships packed with the precious metal were lost or shipwrecked in Lake Superior’s mighty storms.

Was this Mishipeshu exacting his revenge on those bold enough to steal from him? 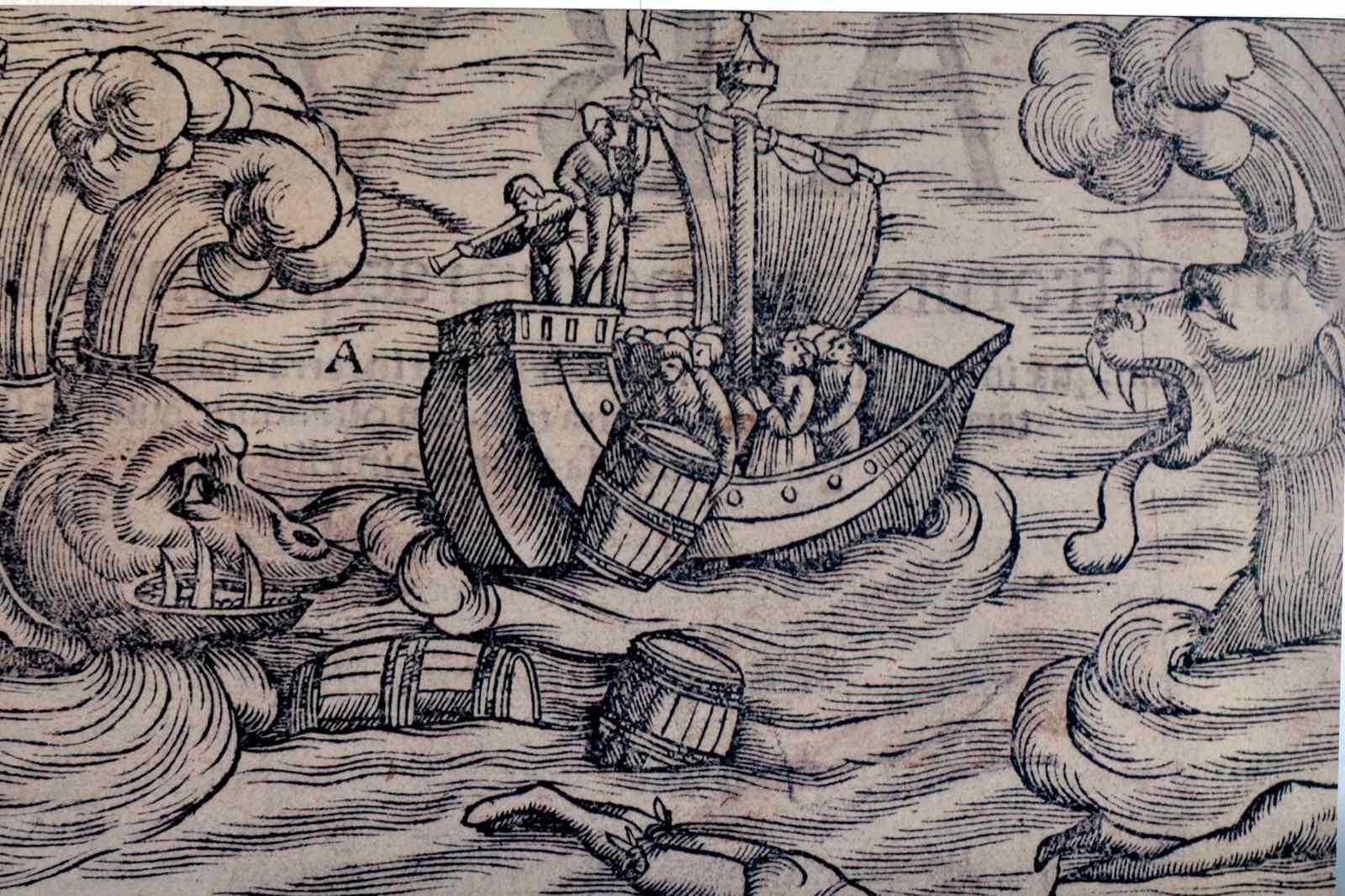 Mishipeshu is known to drown those who trespass on his territory, children in particular. Historically and culturally, myths have always been a way to explain the unexplainable and to provide cautionary tales to children.

In the Churchill River area, children played a game called "Mishipeshu" based on the creature’s ability to drown unsuspecting people. In the game, one child would pretend to be Mishipeshu, and he could only win the game by catching his friends and tossing them into the water.

Perhaps part of this creature’s cultural role was keeping children safe from the strong waters of Lake Superior.

A 1977 monster sighting gave us the first photographic evidence of the creature that lives in Lake Superior.

Randy Braun was hiking in Porcupine Mountains Wilderness State Park in Michigan. In addition to being the largest state park in Michigan, the area boasted 145 kilometers of trails, 60,000 acres of virgin forest, secluded lakes, and rushing waterfalls.

Randy knew he was in for a great day.

But as the trail brought Randy to the shore of Lake Superior, something unexpected was waiting for him.

Randy’s account of the monster may be the most extraordinary yet. 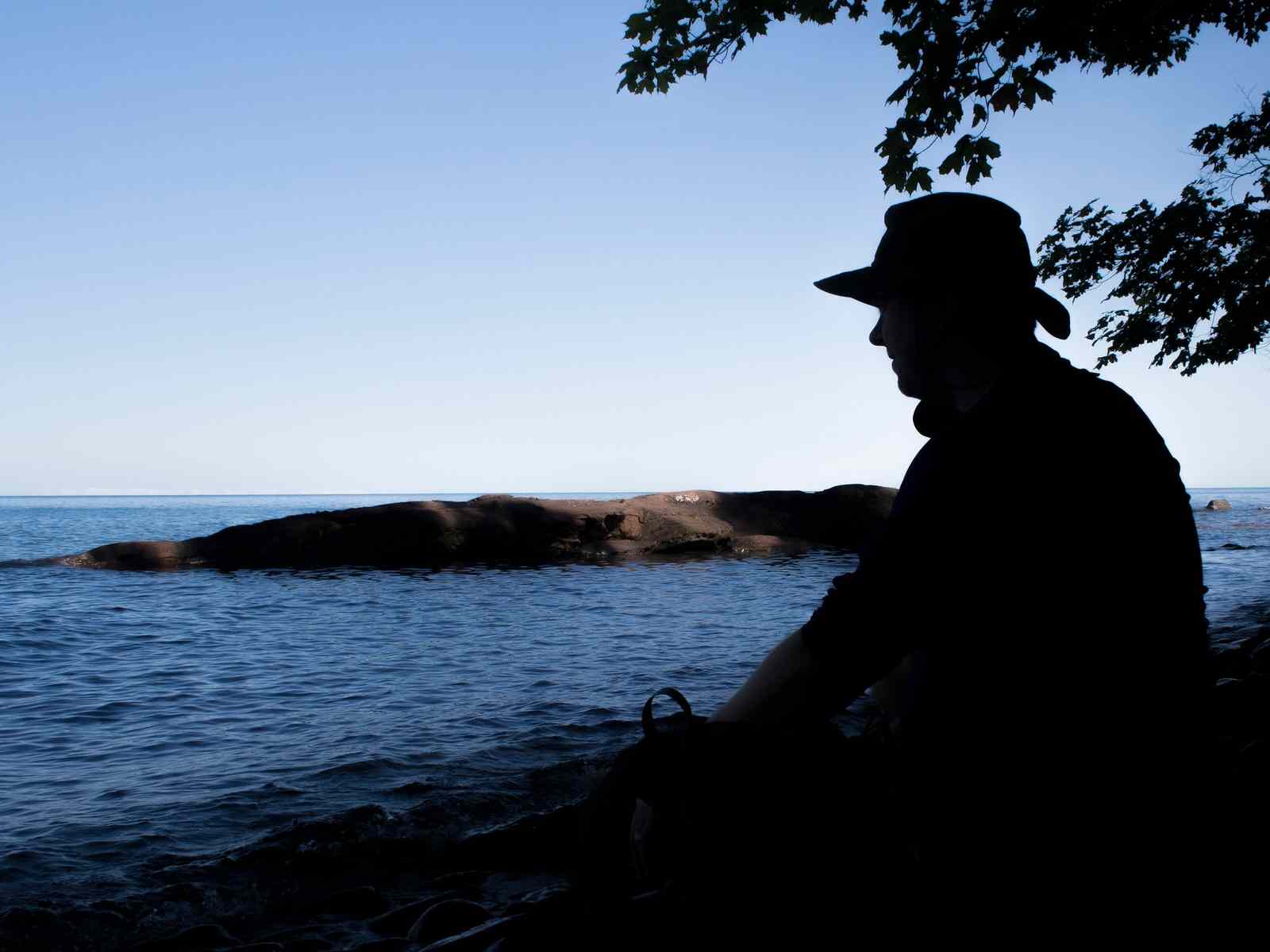 You have no idea what's coming for you, bud. | Credit: jessedouglas (Flickr: Link)

As Randy looked out across the lake’s choppy surface during his hike, he was astonished to see a bizarre figure rising out of the waves.

At first, Randy wasn’t sure what he was looking at, but as it came closer to the shore, he realized it was some kind of strange creature. The humps on the beast’s back would rise and fall beneath the water in sequence, one surfacing after the other.

“The now obviously living thing stopped maybe several hundred feet from me and began moving and weaving around large boulders that were in the water, and directly towards me. IT WAS BIG and resembled an anaconda with the girth of a Volkswagen. Don’t laugh, it wasn’t funny.”

All of Randy’s instincts told him to flee for his life, but he was trapped between a slippery rock slope and the water. So, he jumped behind a nearby bolder and grabbed his camera.

“As it moved towards me it slowed down considerably but was making a noticeable wake. It was strangely quiet while it snaked towards me and stopped dead in the water, right in front of me. IT WAS BIG! I steadied my camera on top of the rock and fired one picture but was afraid to move after that. The thing sat there for about thirty seconds with its huge horse shaped head and large dark left eye staring at me. On the nose was a visible catfish type whisker, maybe two feet in length and wiggling.”

You can see Randy’s photo in the video below and his sketch of the monster here.


Are you convinced by Randy’s photographic “evidence” of the creature?

In my opinion, the driftwood on the shoreline looks much more like a monster than whatever is in the water. I'm not quite convinced.

A symbol of cultural pride

Whether Mishipeshu truly dwells in deep dark depths of the largest Great Lake is up for debate. What’s not up for debate is Mishipeshu’s important place in First Nations culture.

Historically, Mishipeshu has been a point of Anishnaabe cultural pride.

Underwater panther imagery appears in artifact collections on things like quilled shoulder satchels and twined bags. These items were created during a time of uncertainty for the Anishnaabe People—times when their fur trade was decreasing and their alliances were changing. 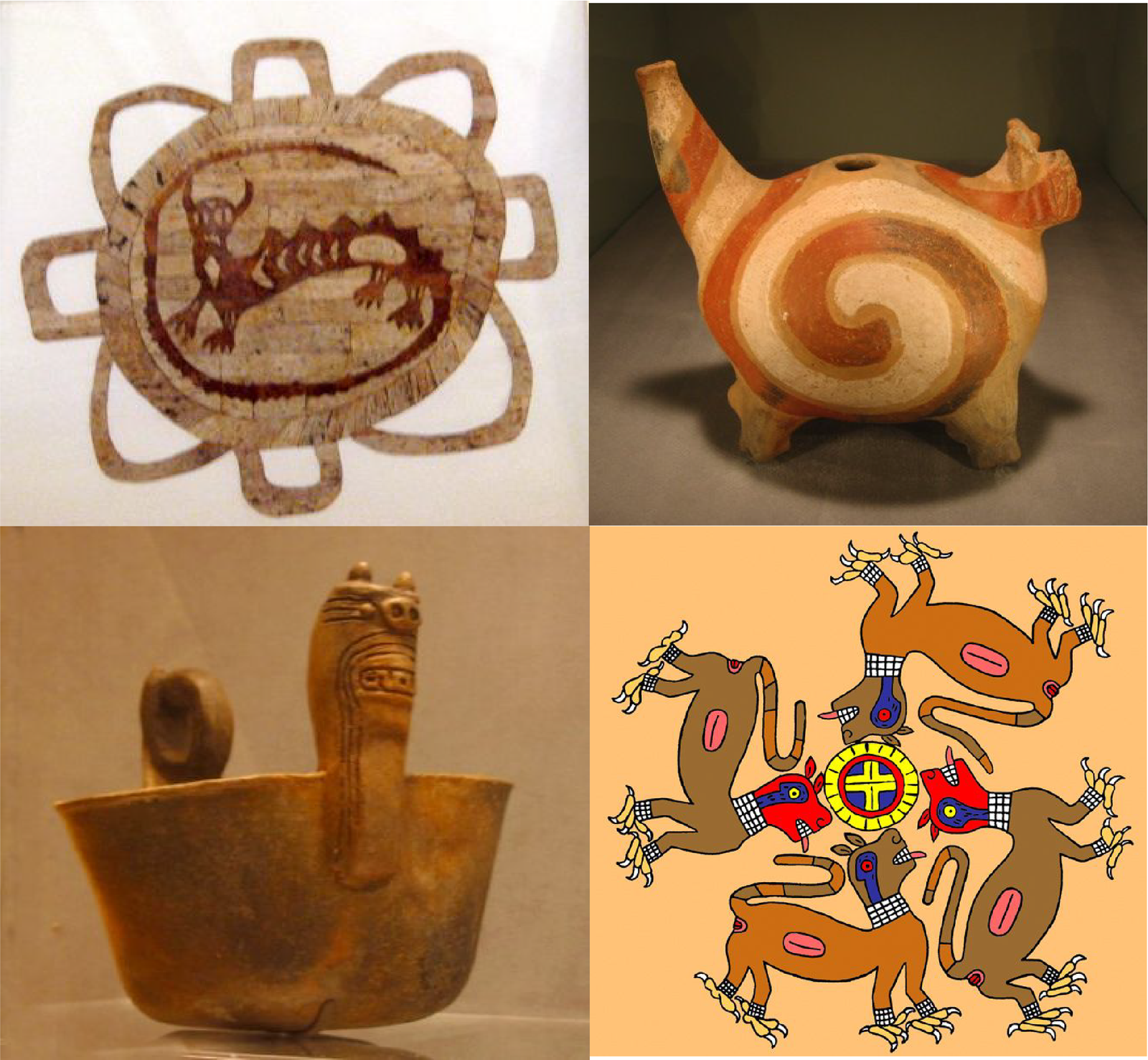 During these disquieting days, items that featured strong traditional imagery were used to call upon feelings of Anishinaabe power.

Today, Mishipeshu is still a well-known part of Anishnaabe culture. The creature lives on through oral traditions, artifacts, and modern artistic depictions, enduring as a symbol of cultural resilience.

If you’re feeling brave enough to come face to face with the infamous underwater panther, visit the pictographs of Mishipeshu on Agawa Rock. 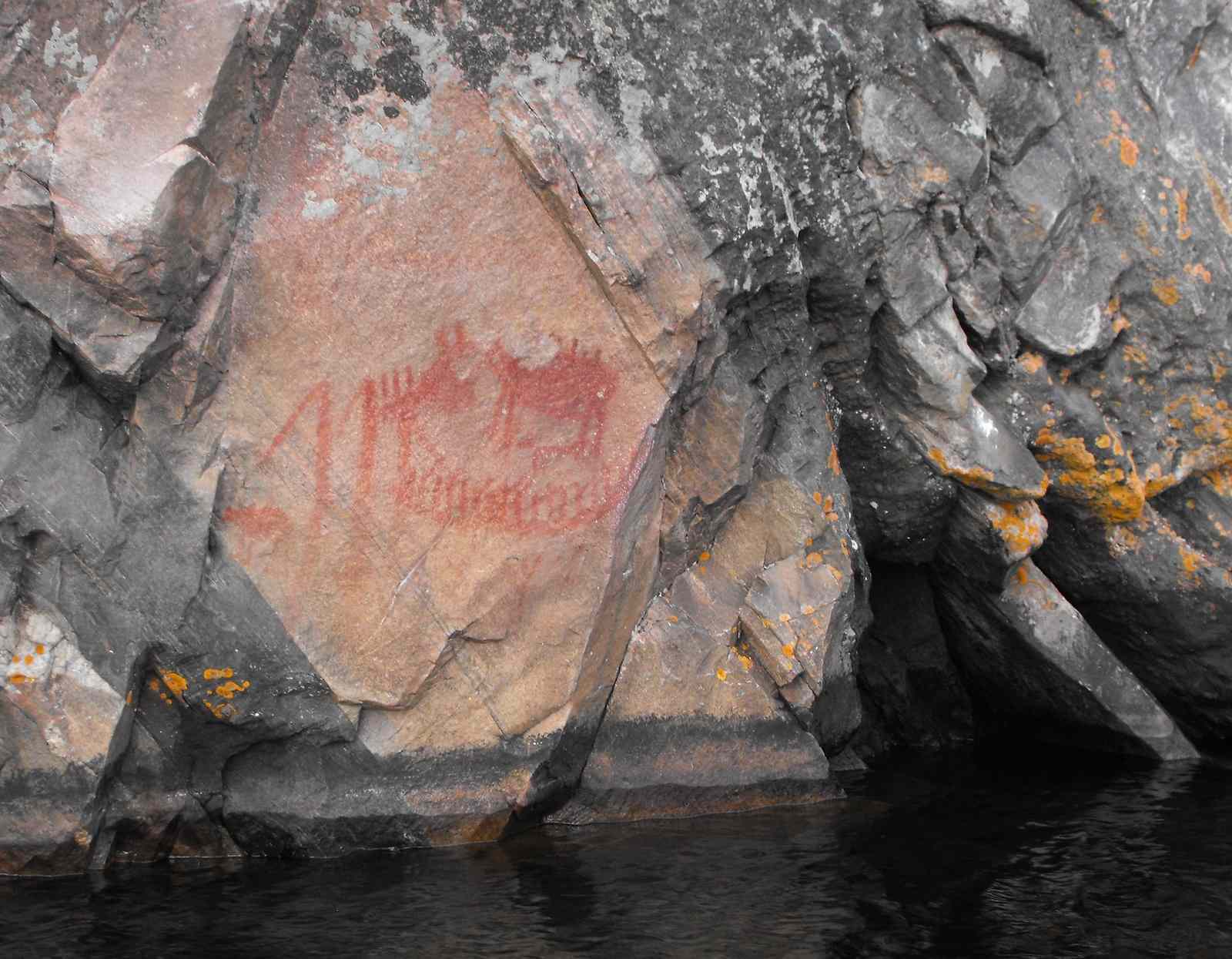 The pictographs on Agawa Rock, just west of the Agawa River along the east bank of Lake Superior, were created between 150 to 400 years ago. Most of the paintings date back to the 17th or 18th centuries.

Agawa Rock is one of the most well-known and most often visited sites for viewing First Nations archaeological pictographs.

You can access the rock by trail, but some of the pictographs can only be seen from the water. It’s worth bringing a boat to the launch at Sinclair Cove (also a great place for swimming) just north of the rock to get the full experience.

Make sure you bring along a good enough offering for Mishipeshu, or else he might not let you make it home!

Meet the real-life monsters of the Great Lakes here

Learn about other monsters in the Great Lakes