Note: People everywhere, including First Nations, have each of its own creation beliefs, told in the form of a story of their ancestors


I love the Great Lakes for more than just the endless possibilities for activities during each season. After a long day on the water, you set up camp, make some dinner, and perhaps watch the sunset.

If you are like me, the only way you ever see the stars is when you have to go pee in the middle of the night or when you stay up as long as you can trying to perfect your skills finding famous stars and planets. Looking at the stars always caught my attention, making me feel wonder and awe at the night sky. 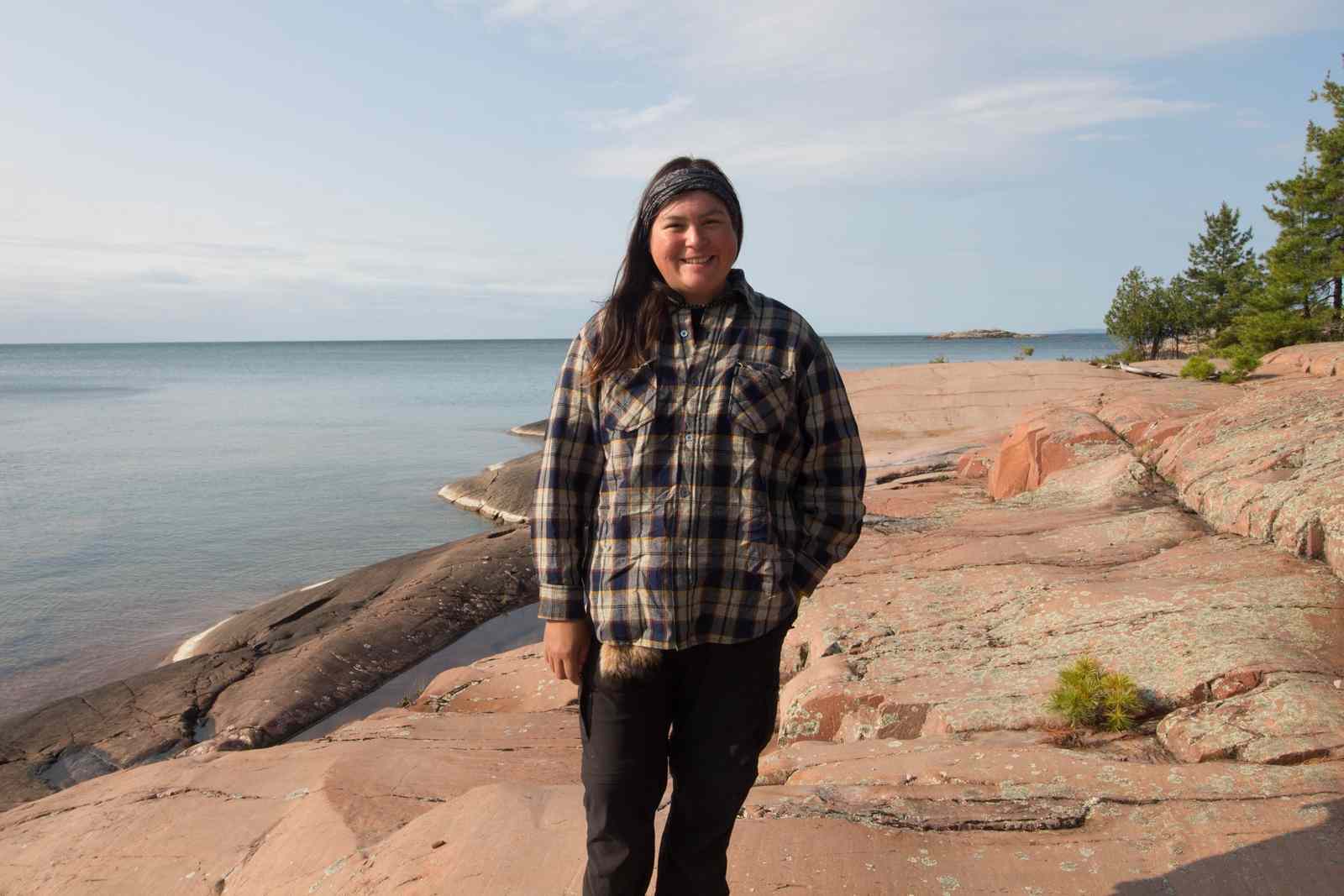 I grew up in Sudbury in North Eastern Ontario. Still, every summer for as long as I can remember, we would go home to Manitoulin Island for two glorious months! I always loved the stars there. The sky was so still, bright, and clear, with a new star popping out every second. This past year, every time I’ve gone home for a visit, I’ve heard stories connecting us to the "hole in the sky," and how the creation story is a part of us. I’ve learned about the constellations, and how these constellations tell us stories about our animals and spirits, about teachings and lessons.

The Greek constellations are well-known. You’ve most likely heard of "Leo the lion," Hercules,” ''Pegasus," and many other stories. However, did you know that these constellations mean something different here in the Great Lakes region?

These stories about the stars can be found in your very own backyard. 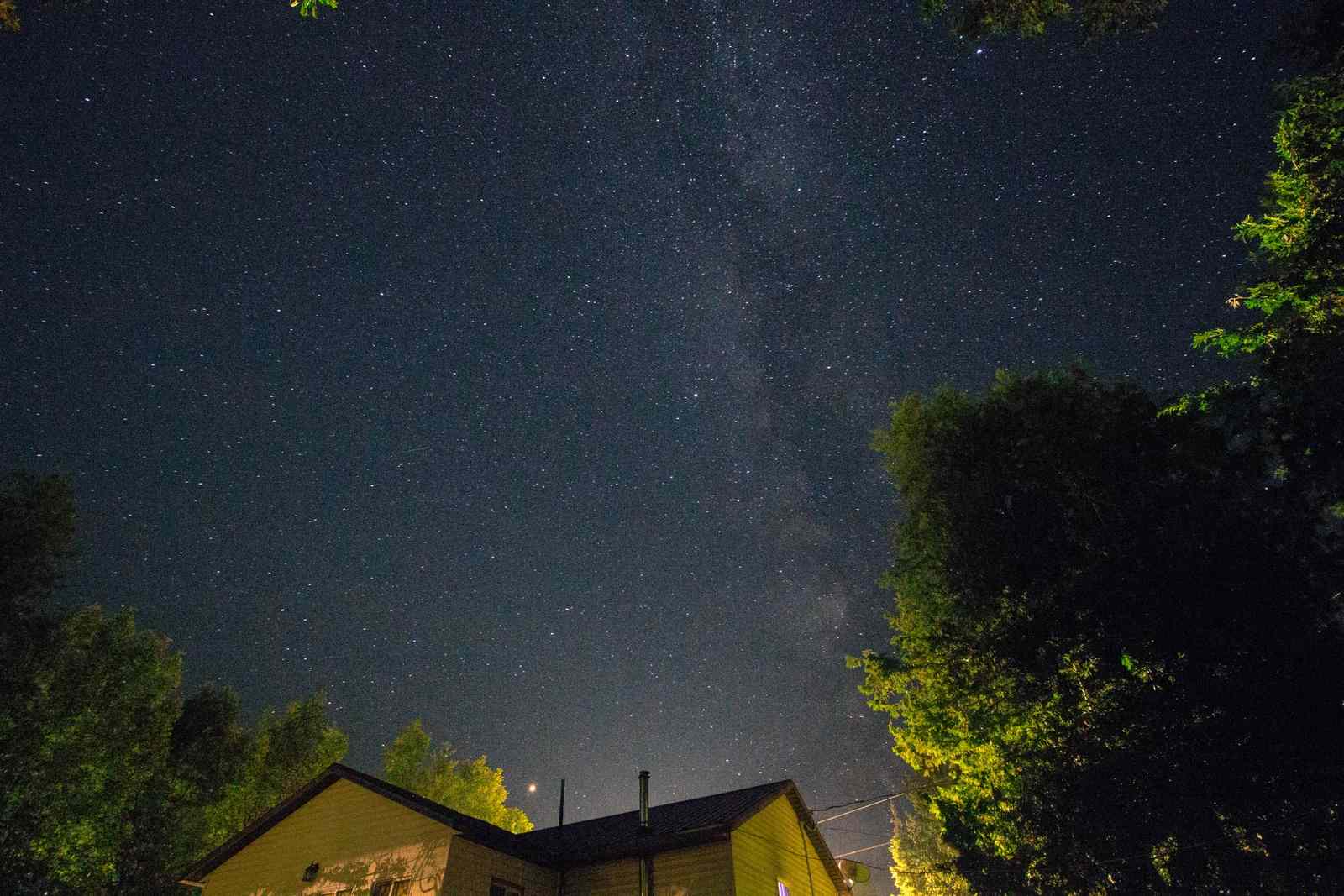 Constellations are a group of stars that make an ideal shape in the night sky. Constellations can depict mythological creatures, people, animals, and objects. All around the world, people have made different shapes out of the same stars since ancient times.

First Nations across Turtle Island are resilient. They continue to overcome centuries of injustice and revitalize their relationship with teachings, ceremonies, elders, and stories passed down by oral traditions.

There are several different nations with different interpretations of constellations. The Lakota/Dakota, Ojibwe, and Cree each have their own map of the sky. Ojibwe stars can be best understood in terms of the four seasons. In each season, you will see constellations more promptly in their season.

There are many stories and lessons to be learned within the stars. Here are 9 Ojibwe constellations and their stories:

The maang (loon) is seen as an essential messenger and leader. The animal sits on calm water with awkwardly positioned feet and legs. They cannot walk well on land; therefore, they avoid leaving the water and only go on the mainland to nest.

The maang constellation holds a vital star, the Giiwiidin Anang (the north star/Polaris). When you see the many white spots on the loon, it looks reminiscent of a starry night sky. 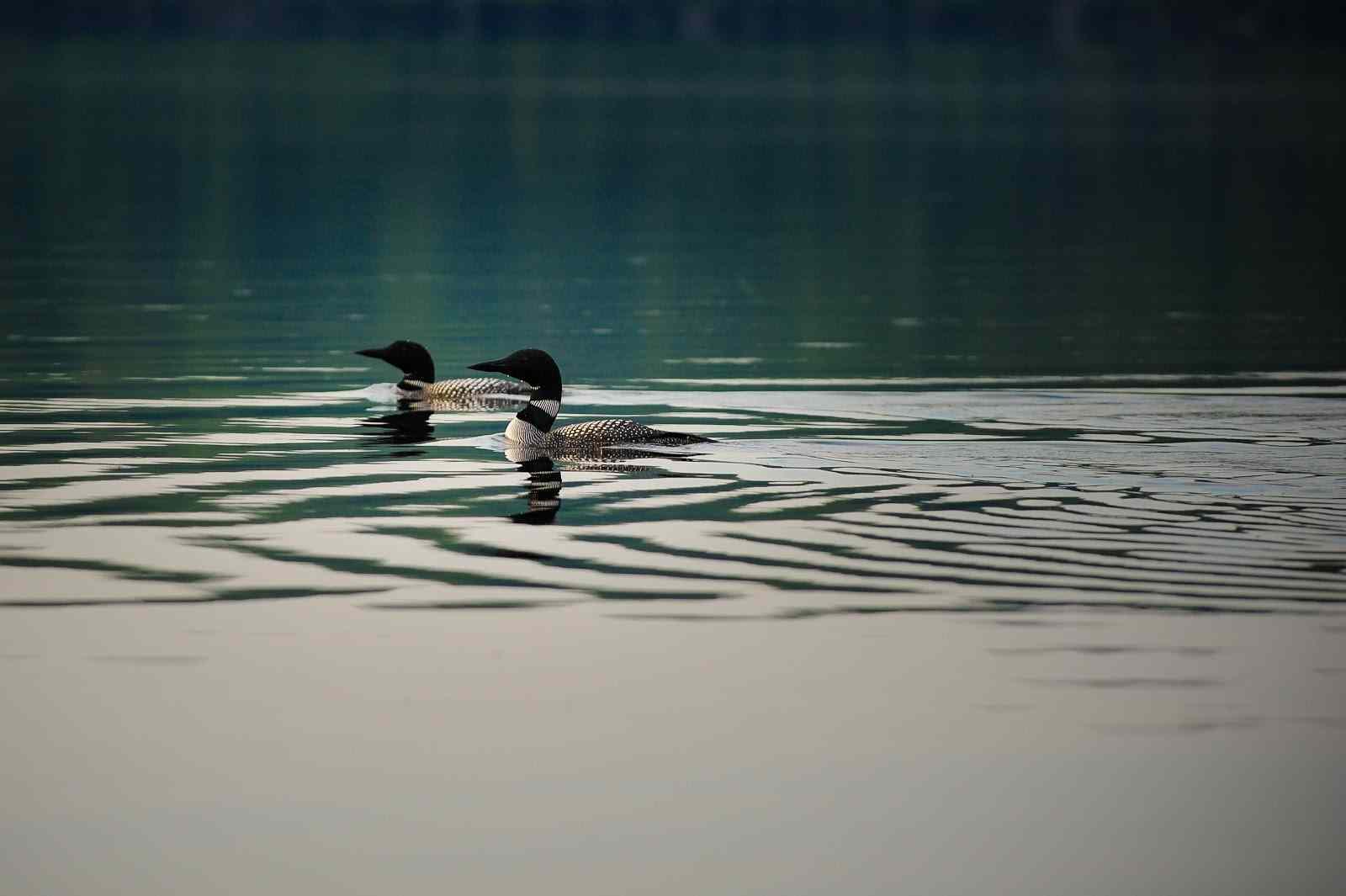 The story of the fisher tells of when the birds and spring were held prisoner by spirit monsters. Because of this, the birds were not able to share their songs to let everyone know spring was coming. Of all the animals, it was only the Fisher that was able to trick the spirit monsters into freeing the birds so spring could come.

The Fisher released the birds, saving everyone with his cleverness and wit. The spirit monsters were upset with him. They were never going to give up tracking him, so Fisher ran and ran from them, avoiding their arrows.

He thought he could trick the spirits by climbing the highest tree and jumping into the sky world, but the spirit monsters shot arrows at Fisher as he jumped. The arrows pinned his tail to the sky, and Fisher has been a part of the constellations ever since. 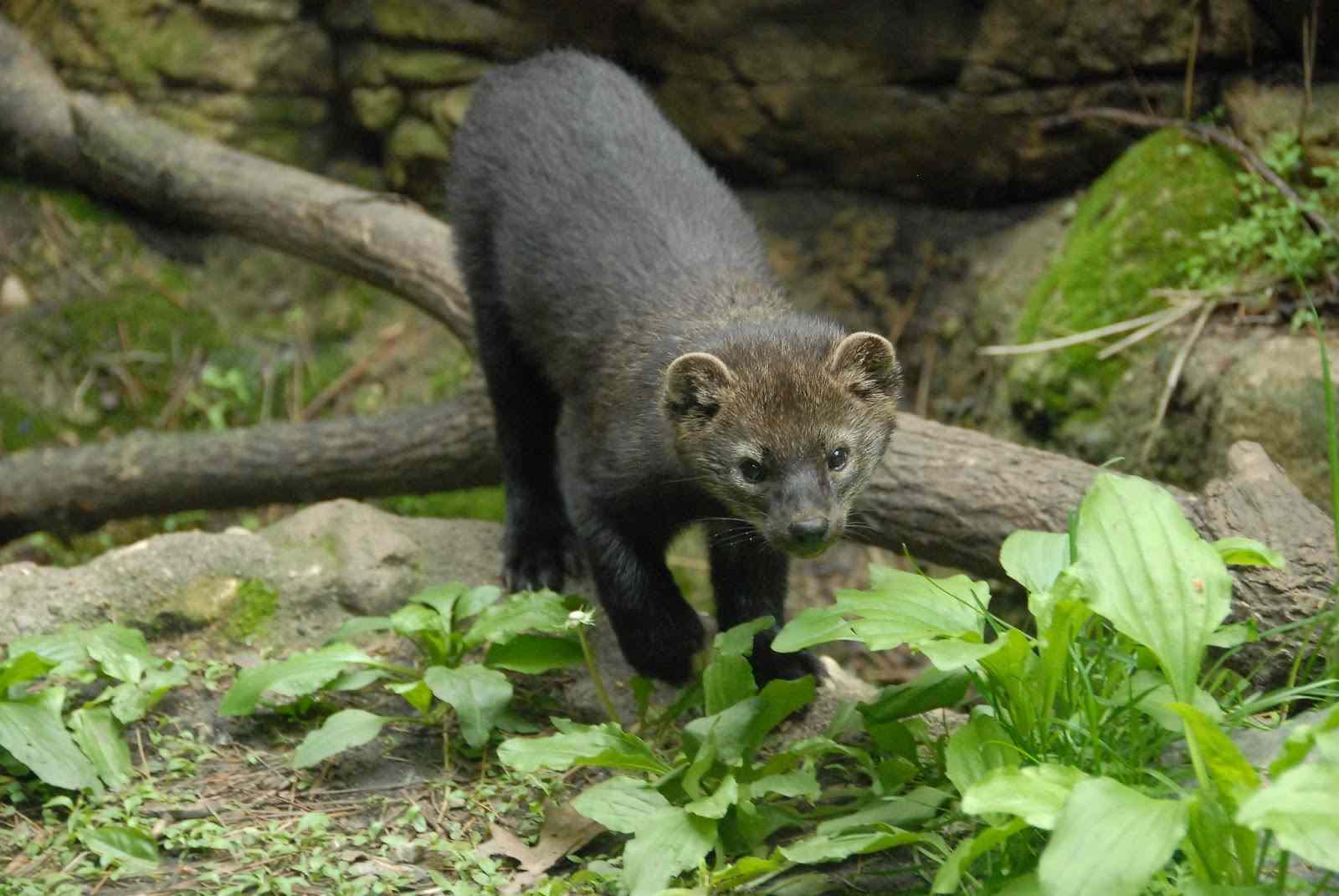 The Fisher in this story mirrors the behaviour of fishers in the wild. The Ojiig (Fisher) is continuously moving around the North Celestial Pole, day and night, year after year.

The Ojibwe honour the fisher because it is so clever. So clever, in fact, that it is the only animal that can kill and eat porcupines. Fishers also tend not to build a home in one place, which reflects the nomadic lifestyles of some First Nations tribes. Fishers make their dens in different areas and are always on the move.

Winter maker is an essential mythological figure in Ojibwe culture. He is a spirit that makes winter. His outstretched arms rule the winter sky.

The Ojibwe and other tribes would only tell stories during the winter months, when the snow was on the ground. If you told stories outside of the season, spirits would trick you and make jokes. Things would go missing and you would start forgetting what you are doing.

The big spirit cat lives in bodies of water and can cause flooding, drowning, or other water dangers. The Anishinabe people would put tobacco offerings in the water for the Spirit before they go off in canoes so they would have safe travels.

This constellation is visible overhead in spring. Spring is when the Anishinabe people know the ice is thawing, and know that it would be dangerous to travel across waters. Traditionally, both the constellation and the thawing ice signaled that it was time to move to winter camps to the sugar bush camp.

The Greek constellation Leo (the lion) overlaps with the Ojibwe MishiBizhiw tail. The head is located in the ancient constellation Hydra (the water snake).

Ojibwe believe that human beings are made of body, mind, heart, and spirit. The Spirit leads. The sweat lodge is a purification ceremony that signifies returning to the womb and remembering or renewing a person’s Spirit. The sweat lodge constellation can be seen in late spring.

The Ojibwe clan system was created to provide leadership and care for needs such as protection, food, leadership, and medicine. There were seven original clans. Each clan was known by its animal emblem, or totem. The animal totem symbolized the strength and duties of the clan. The seven original clans were given a function to serve for their people.The crane is one of the leaders in the Ojibwe clan system. 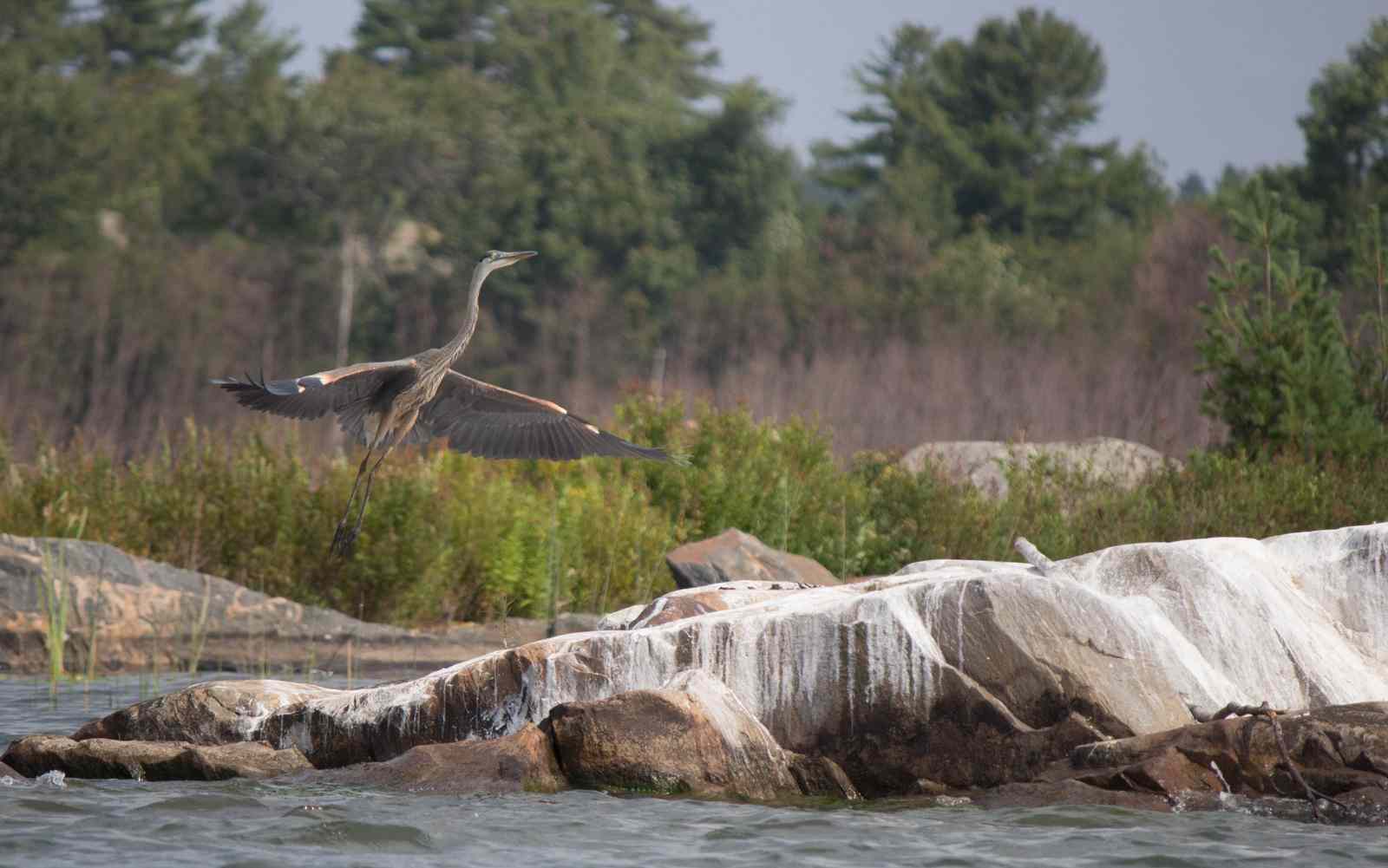 The Aijijaak (crane) constellation leads the Ojibwe people and helps them to stay strong. This constellation appears overhead a few hours after sunset in the summertime.

Nanabozho, also known as Nanabush, is a spirit and figure that is prominently featured in storytelling, including the creation story. Nanabush is a trickster hero and cultural figure. Nanabush went on many excursions on earth a long time ago.

The Spirit is seen aiming his bow at MishiBizhiw. After the world was created, Nanabozho and MishiBizhiw were in a great battle with each other. Nanabozho hit MishiBizhiw with a magic arrow on his side, injuring him.

MishiBizhiw crawled back to his water den and asked if any Anishinabe would heal him for riches. Nanabozho tricked MishiBizhiw, saying that he will heal him. Nanabozho also tricked the frog people into letting him use a frog skin to disguise himself so he could get close to MishiBizhiw. When he got to the evil MishiBizhiw, he rammed the arrow tighter in his chest but failed to kill him. Enraged, MishiBizhiw called upon the water to flood the earth. This is when muskrat brought back parts of the old world to recreate the new.

What it shows: The Exhausted Bather
Greek counterpart: Hercules

This constellation shows a person who has just completed a sweat lodge ceremony. The person is exhausted on the inside but full of life and spiritually renewed on the inside. Usually, these ceremonies would take place in the spring.

A long time ago, there was a time when the moose had vanished from the land. An owl had flown across the land and seen how poorly the people were doing without moose. The Owl flew further north and noticed a large herd of moose, fat and healthy, grazing on balsam firs and water plants.

The moose have been a great resource for the First Nations, just as the buffalo was for the Plains People. Every part of the moose was used for essential purposes, to make clothing, knives, tools. Even the hide would be cut into strips to make snowshoe lacings.

In the fall sky, you will see the moose constellation. Fall is the time to hunt and harvest the moose and give it the utmost respect and offerings for giving itself to the Anishnawbe to survive during the harsh winter months.

With so many constellation stories shared throughout history, many Indigenous tribes are revitalizing and reawakening lost ceremonies and traditional knowledge.

We must be cautious not to introduce or propagate errors into written or oral records. If you are interested in learning more about these stories, seek out elders and Indigenous community members to bring into classrooms or events. The material shared above is just an introduction. We encourage mindfulness of cultural protocols that must be respected, such as these stories. That said, we hope you get out there and enjoy the night sky a little bit more, and see the stars in a whole different way.


A combination of knowledge shared in this article is shared from various resources such as Elders, Community members, the book called Native Skywatchers written by Annette Lee, William Wilson, Jeff Tibbits, and Carl Gawboy 2002, and Talking Sky written Carl Gawboy and Ron Morton 2014