There is a series of small islands on the eastern side of Lake Ontario, part of the Thousand Islands National Park. Two of these islands (Main Duck and Yorkshire) are known collectively as “The Ducks”. They have a fascinating history and ecology and are considered by many as “the Galapagos of the North”. 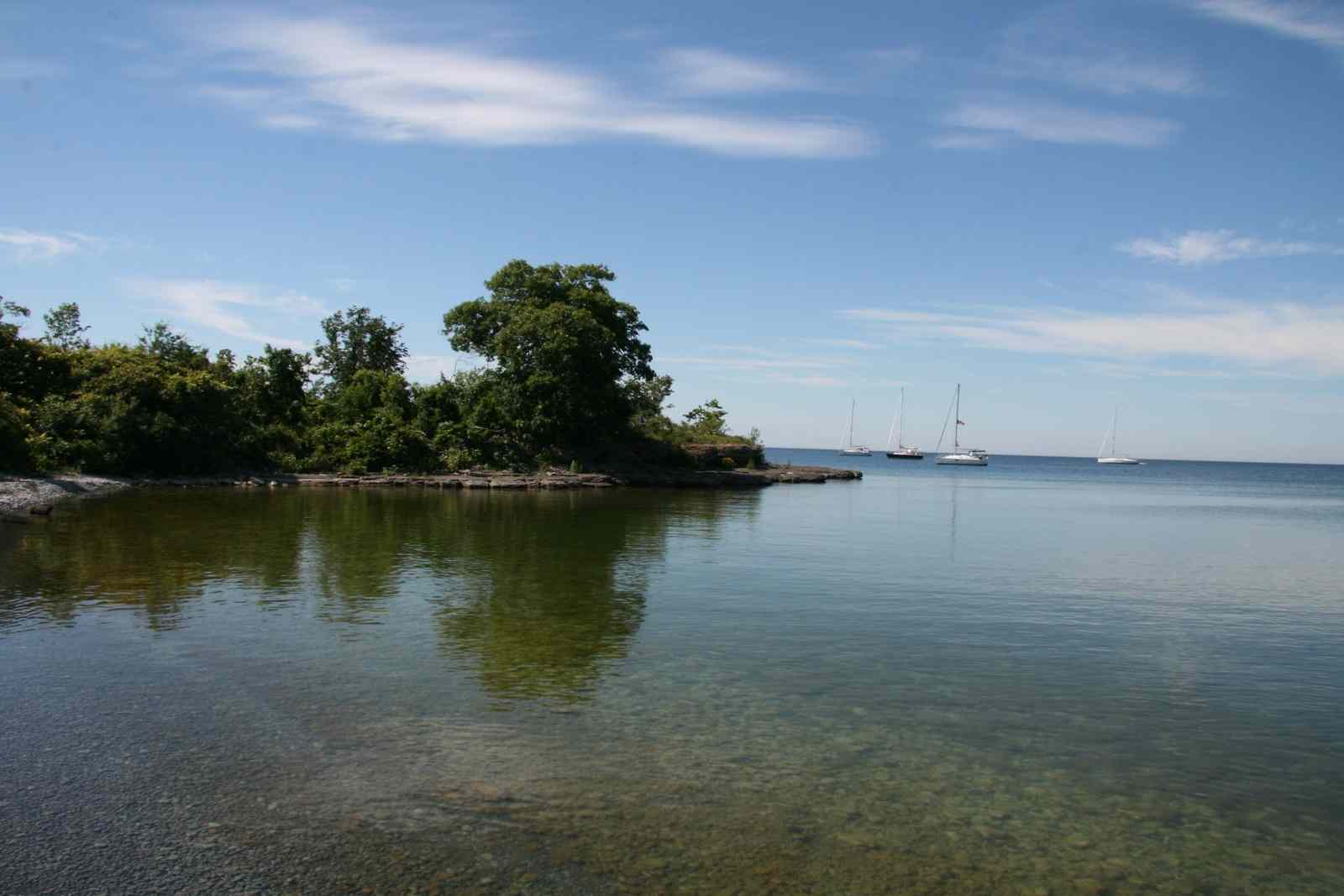 If you were to guess what species of wildlife is most widespread on Main Duck Island, what would you say? Probably ducks, right? This is a completely reasonable assumption, but you would be wrong. The true rulers of the island? SNAKES. 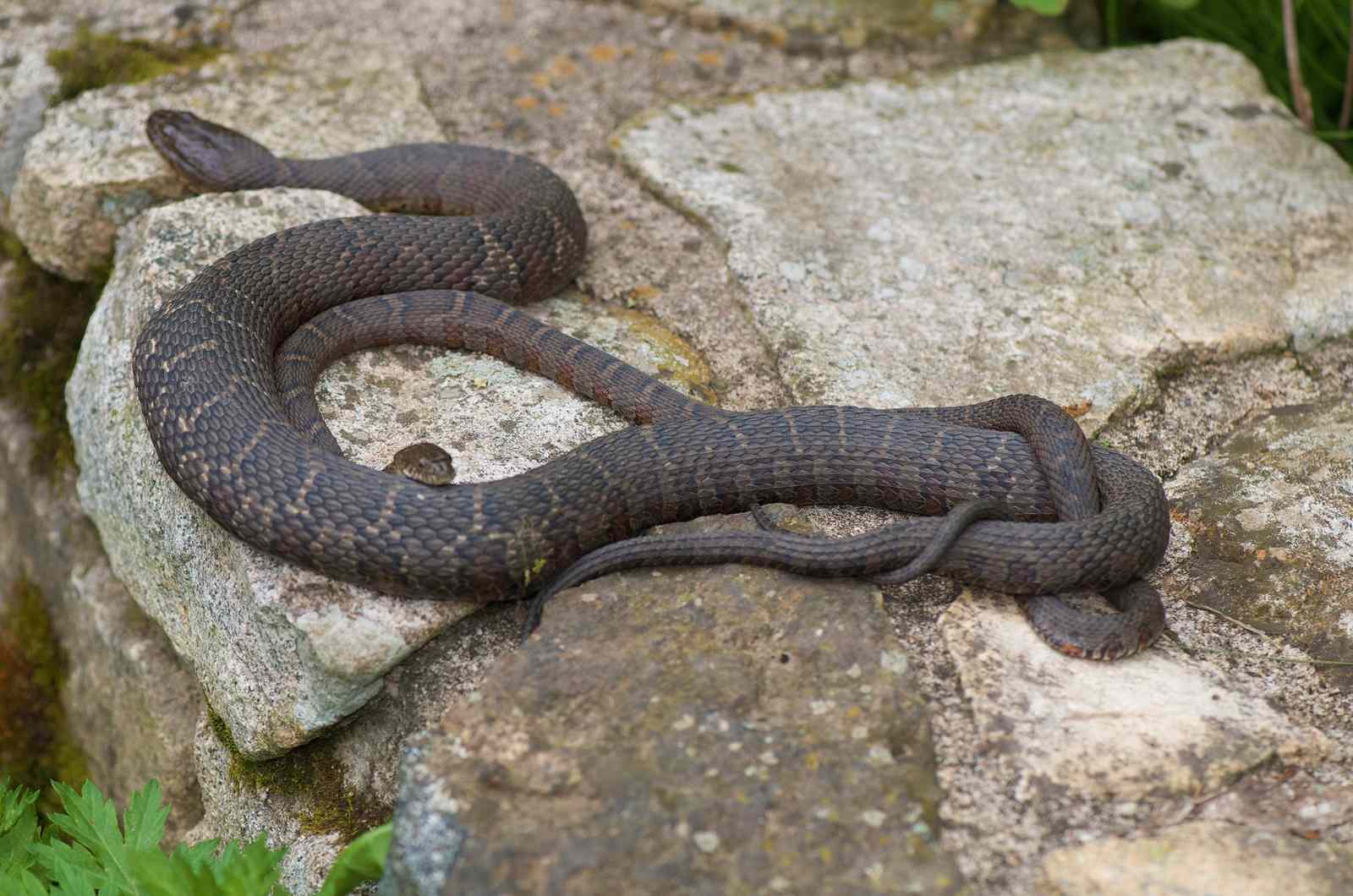 Main Duck Island is famed for its snakes. In fact, snakes will likely be the first to greet you as you approach the island. If you spend just a few hours there, you’re likely to lose count of just how many serpents you encounter. 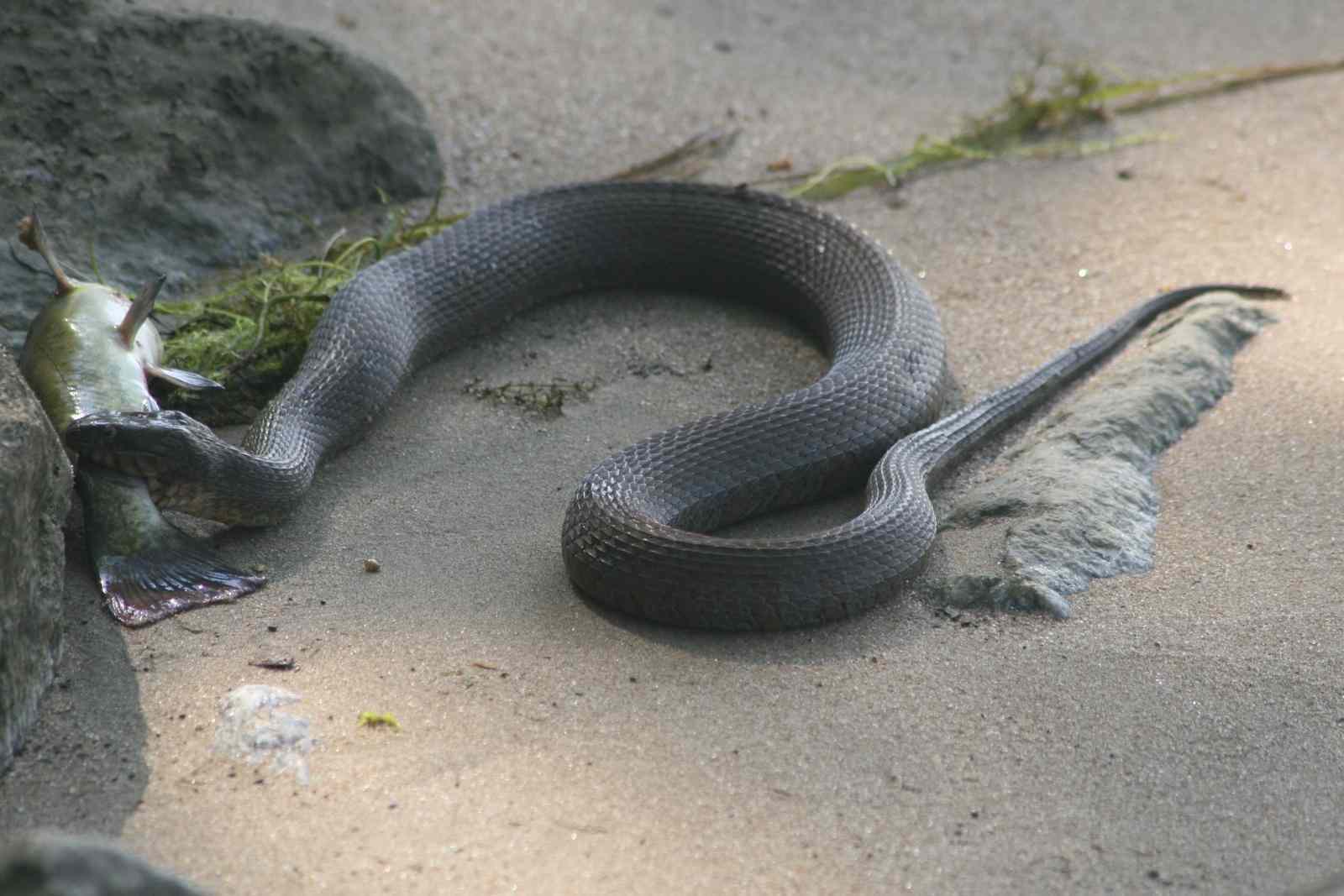 One of the most prominent snakes on Main Duck Island is the Northern Water Snake. This snake is found throughout the Prince Edward County region, usually residing along swampy shorelines and ponds. 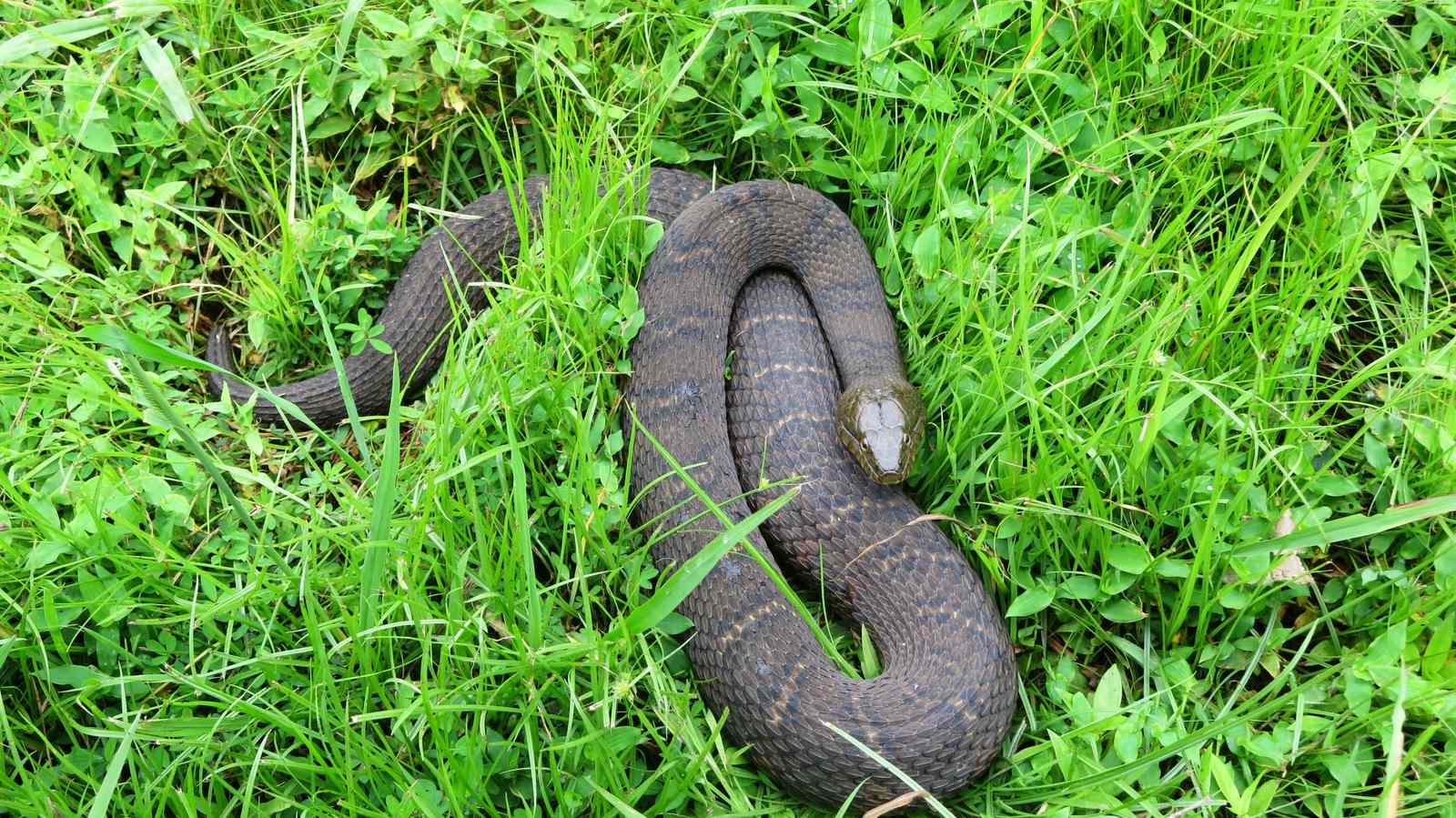 You can identify Northern Water Snakes by the patterns of dark, saddle-like crossbands that run along their necks and the dark blotches that cover the rest of their bodies. Northern Water Snakes have keeled scales (this means their scales are ridged down the centre), which gives them a matte and rough-looking appearance rather than a shiny and smooth one.

As Northern Water Snakes enter adulthood, their colouring darkens, and their most distinctive patterns may be obscured, leading to an evenly dark brown or black appearance. 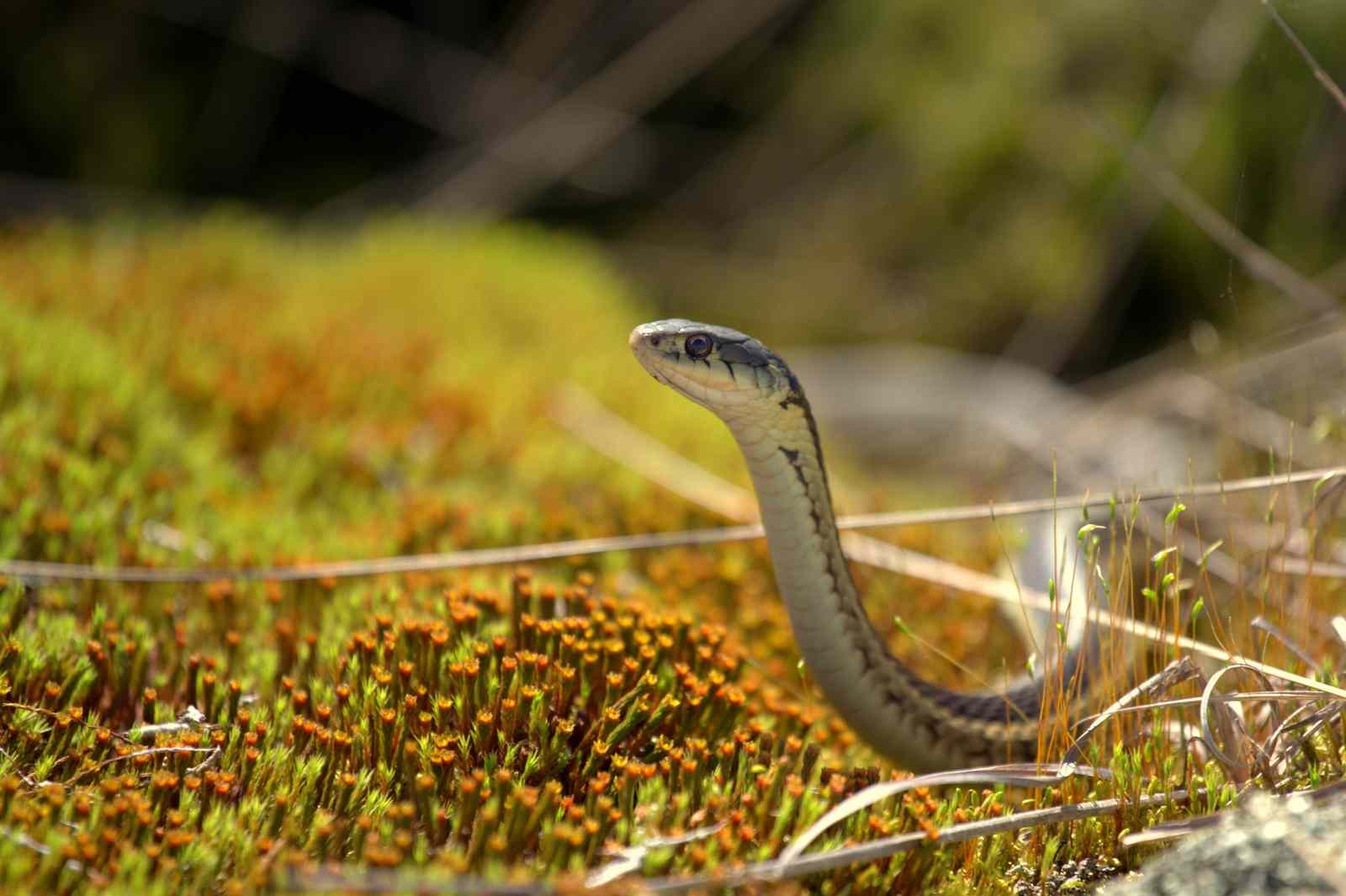 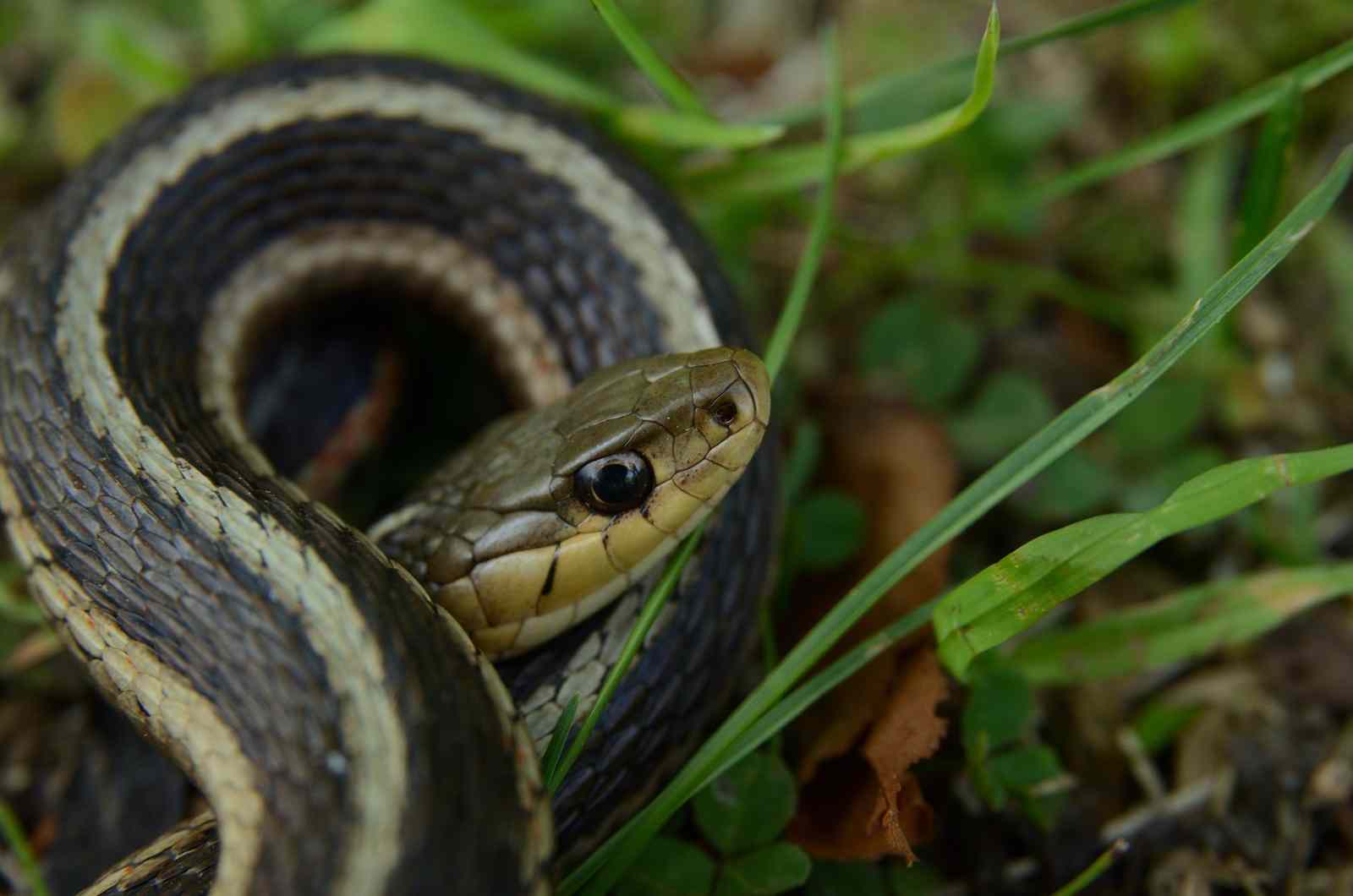 These snakes are usually about 46–66 cm in length, although they have grown to over a metre long in some cases! 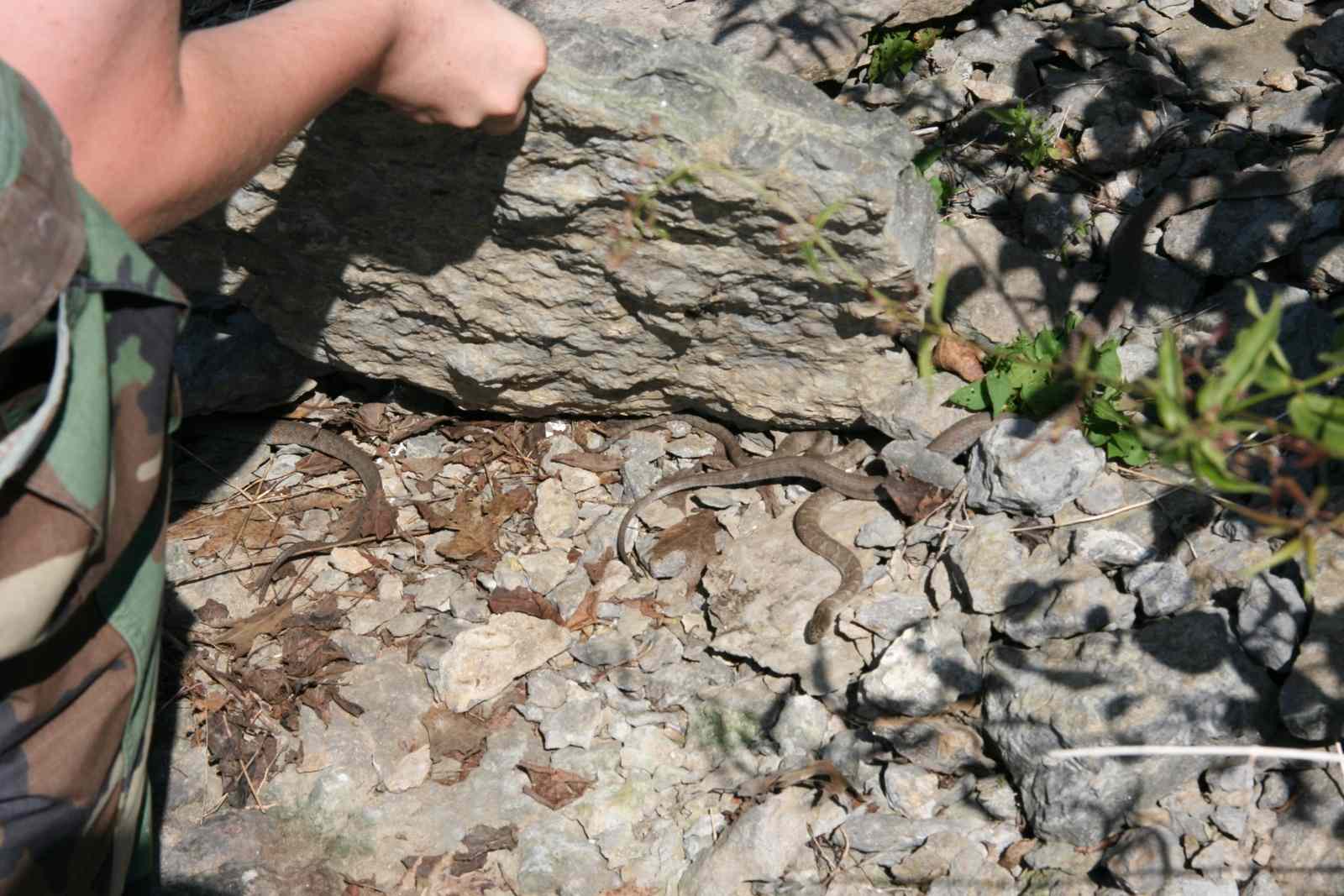 Why are there so many snakes?

On Main Duck Island, snakes have very few natural predators. Owls, hawks, falcons, herons, and other large birds prey on snakes, but these hunters do not often frequent this isolated Lake Ontario Islands. There was a time when bald eagles inhabited Main Duck Island, but now they only stop by on their southward migrations. 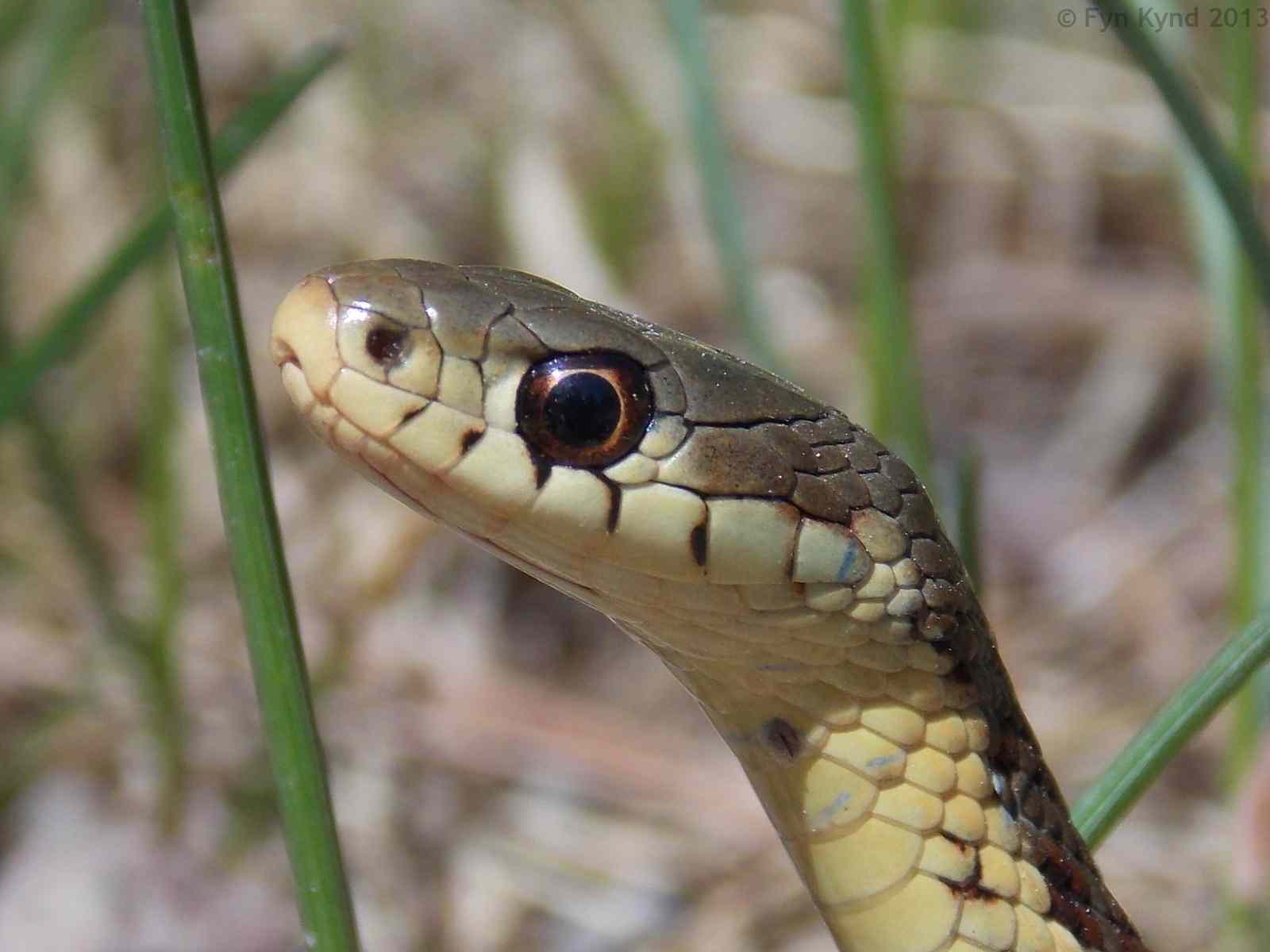 It’s been said that during prohibition legendary rum runner, Claude “King” Cole, owned a farm on Main Duck Island with sheep, horses, and hogs that would feast on the snakes dwelling in limestone cracks. It’s also been said that when the lighthouse on Main Duck Island was active (from about 1914 to 1978), the lighthouse keepers would do their best to keep snake populations down. 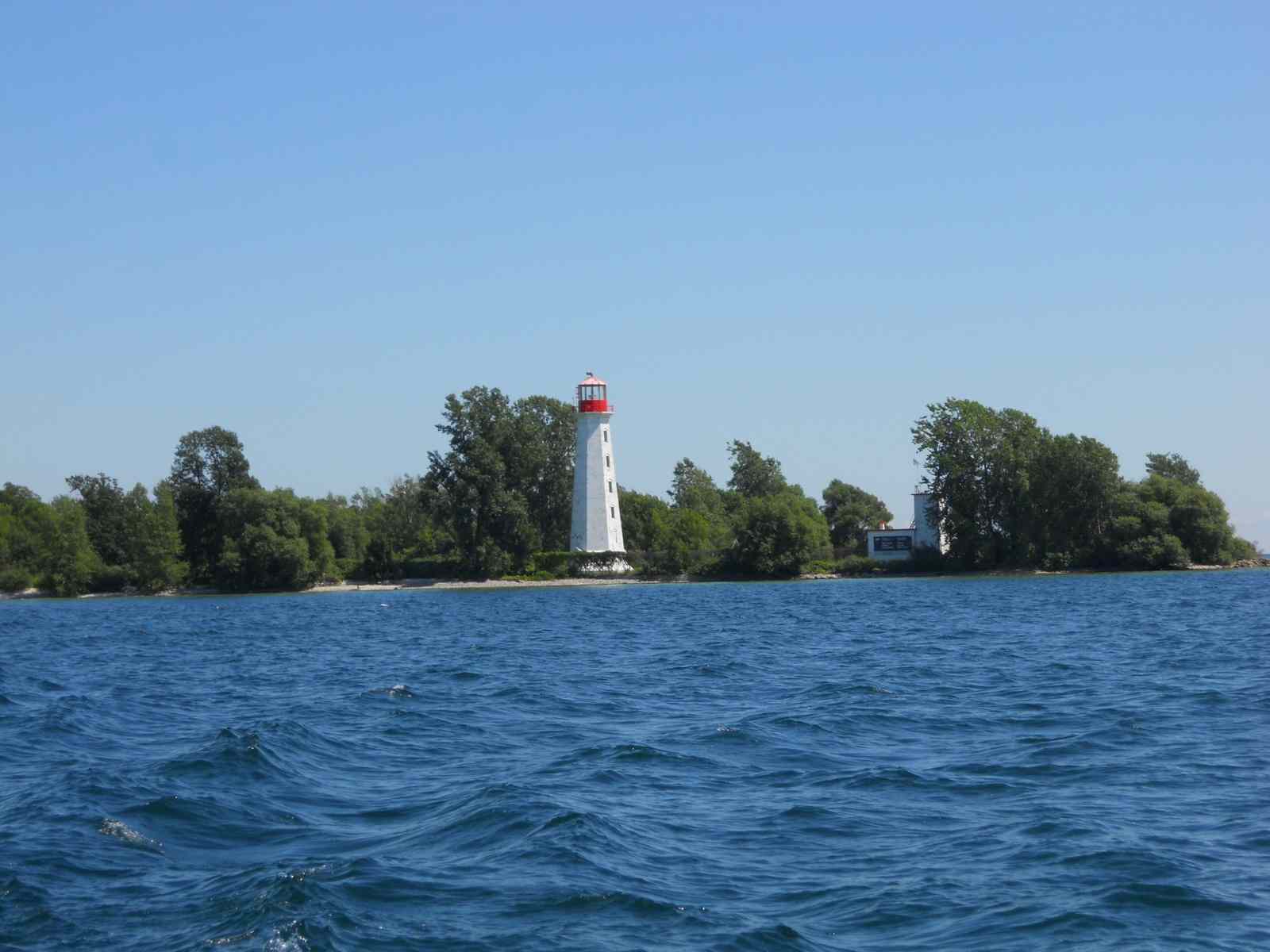 In general, one of the primary threats to snakes in the wild are humans. Car deaths and habitat destruction due to development and pollution are some of the most significant hazards for snakes today. Sometimes, non-venomous Northern Water Snakes can also be mistaken for venomous Cottonmouth snakes due to their similar appearances, and will be shot and killed by frightened humans.

However, Main Duck Island is not currently inhabited by people, so snakes on the island are mostly safe from such dangers. They are thriving in this isolated paradise!

Island ecosystems are immensely different from ecosystems on the mainland. Some island qualities, such as their isolation and many empty niches, can sometimes lead to increased speciation.

Niches are the match of a species to particular natural surroundings and circumstances. A niche determines how a given animal (or an entire animal population) responds to environmental factors like resource distribution and competition.

A species may grow large and healthy when its habitat has ample resources and few predators. Islands are known to supply plenty of unfilled niches in which species can adapt. Because many islands are far removed from the mainland, immigration of both predators and competitors are uncommon.

So, isolation and niches on an island can lead to speciation. 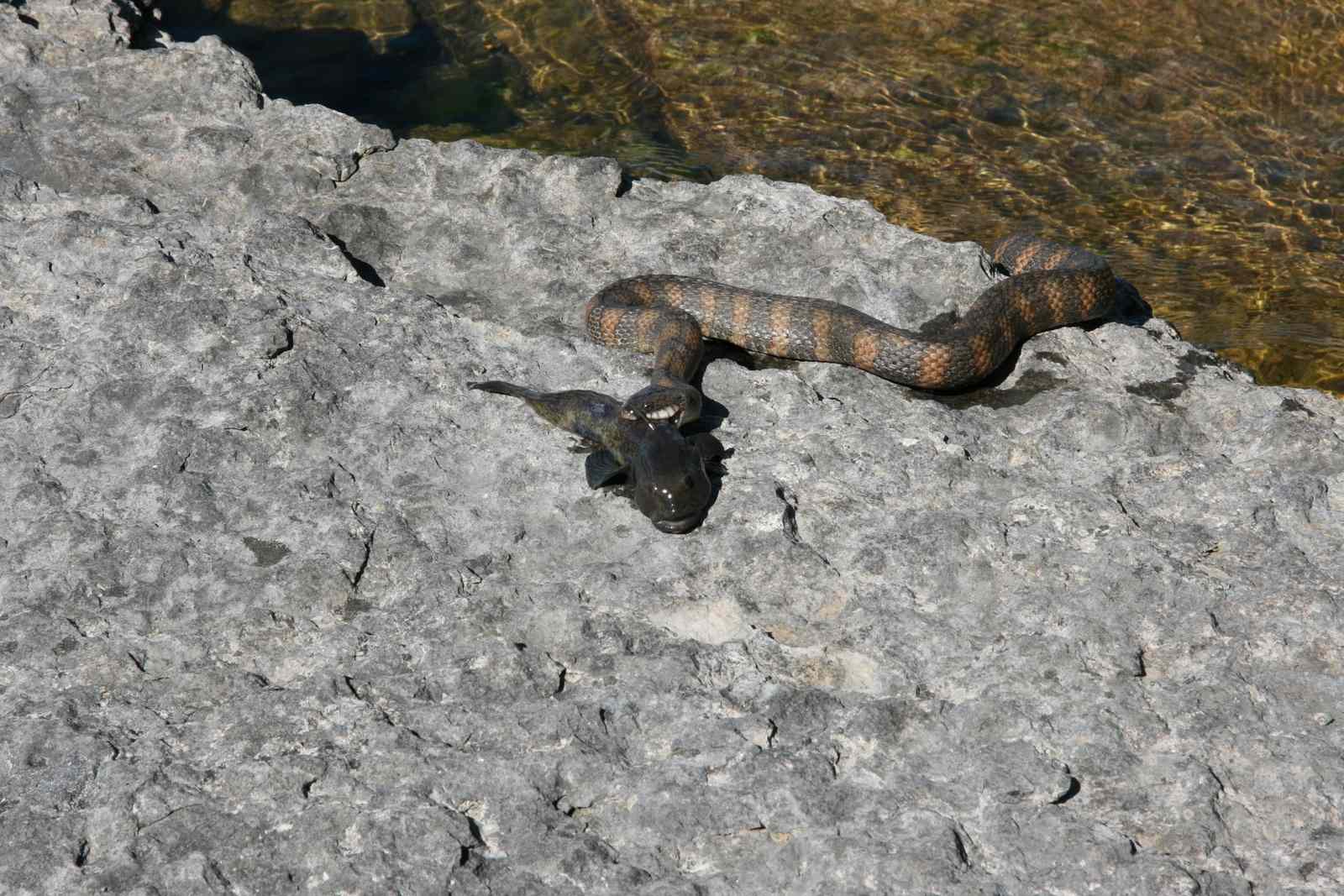 Speciation occurs when a new, separate species evolves from a common ancestor. The snakes on Main Duck Island are an excellent example of this kind of process. The Northern Water Snakes that live on the island tend to be much larger and much darker than those that live on the mainland.

And why are they so big? Island gigantism! Island gigantism is a phenomenon in which a species isolated on an island becomes larger in size compared to its relatives on the mainland. Species are able to grow much bigger because they have fewer (if any) large predators. Their large size allows them to survive for longer periods of time without food or water, or else allows them to travel longer distances to find food and water. 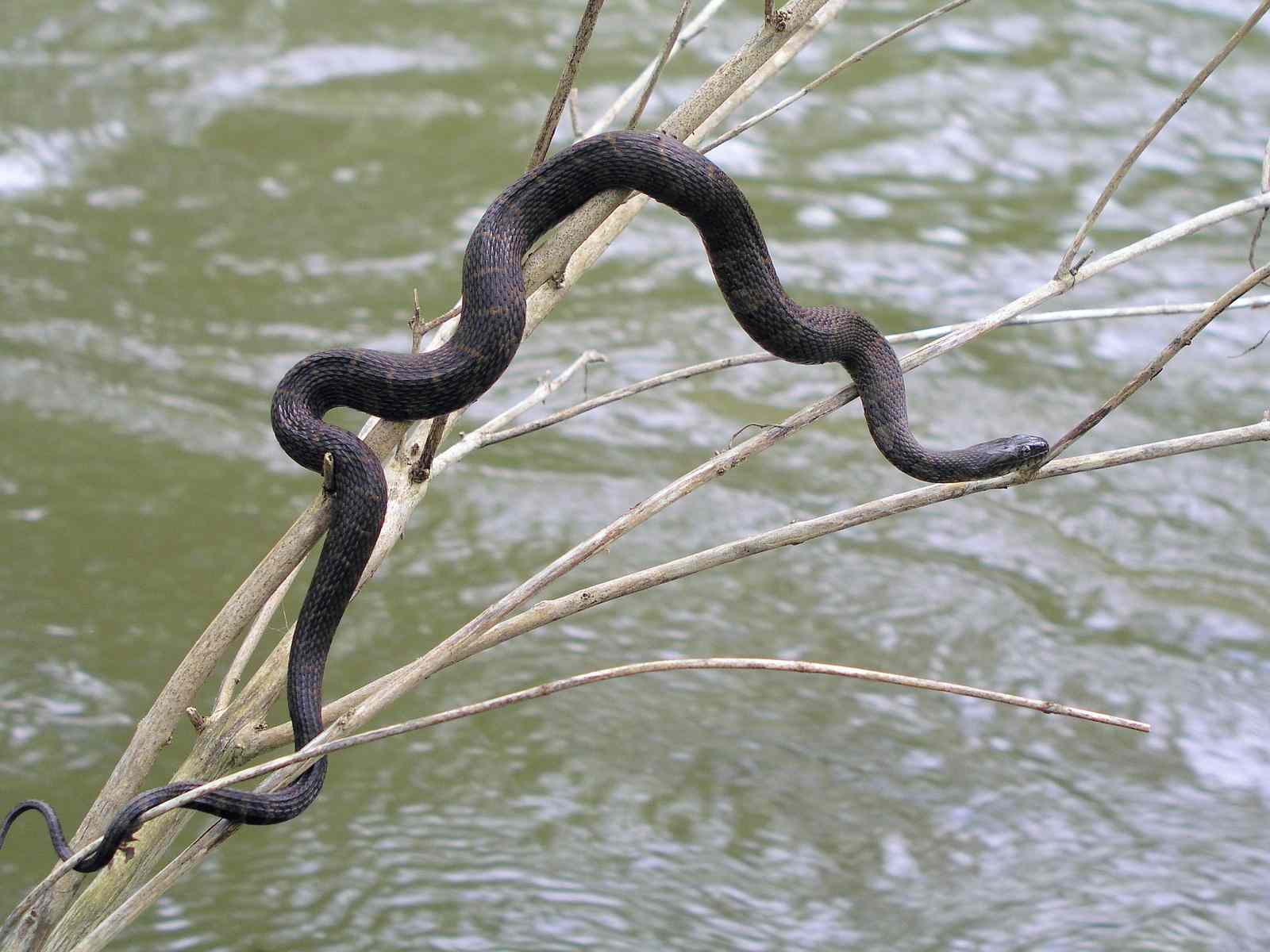 According to researchers from Queen’s University, the isolated and ideal conditions on Main Duck Island have led to a possible subspecies of Northern Water Snake that is quite distinct from mainland Ontario populations. These snakes are considered an endemic species, meaning that they are distinct to a defined geographic location.

How to spot a snake 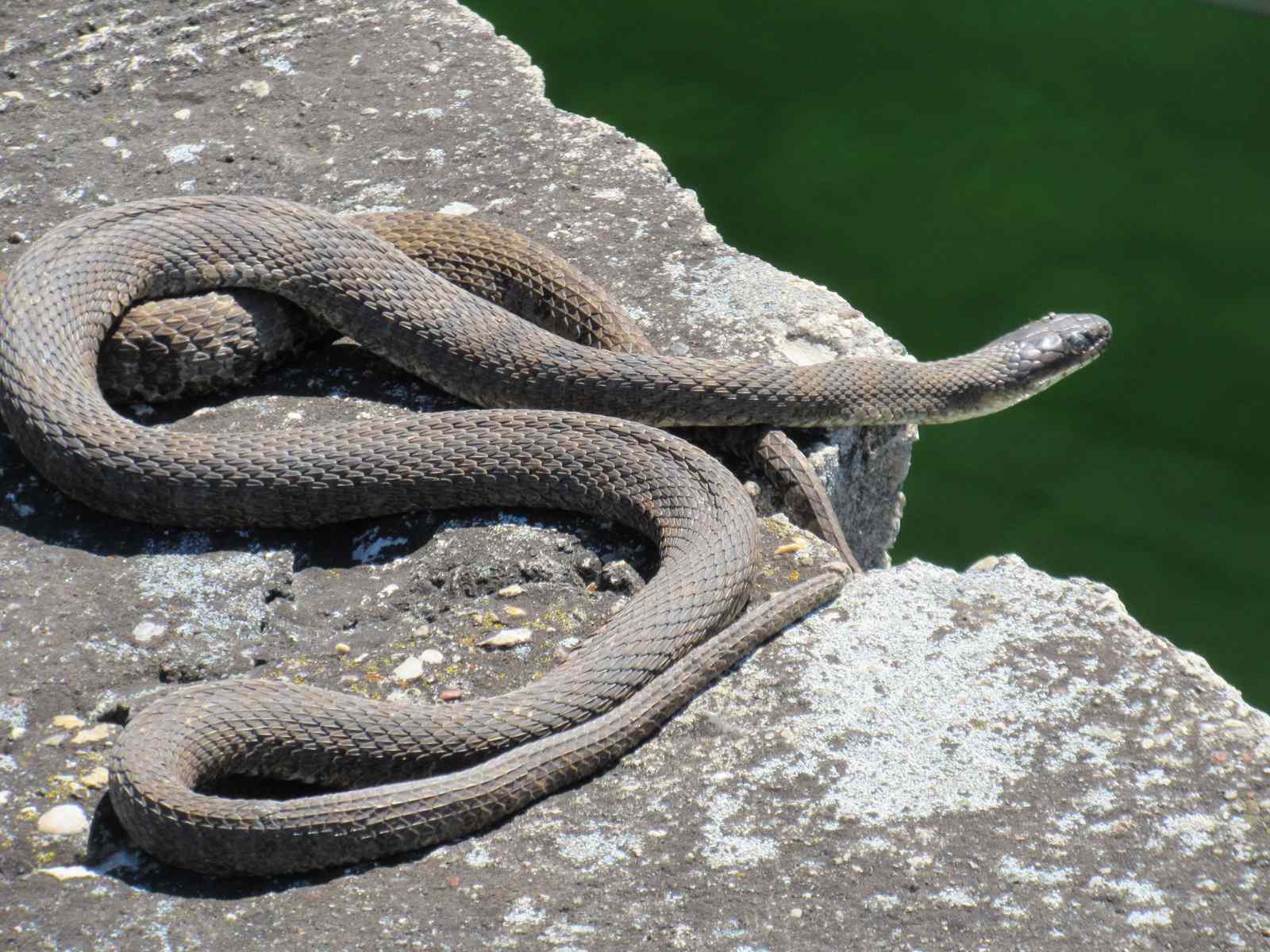 While it’s unlikely you’ll have trouble finding snakes on Main Duck Island, there are ways to make sure you spot them. Look for our scaly friends in the limestone cliffs and shingle beaches, as well as around streams and ponds (the western part of the island has many ponds).

You might also see them in Lake Ontario itself. Yeah… did I mention that they can swim? You’ll probably see them sunbathing on logs and branches or skimming across the water. 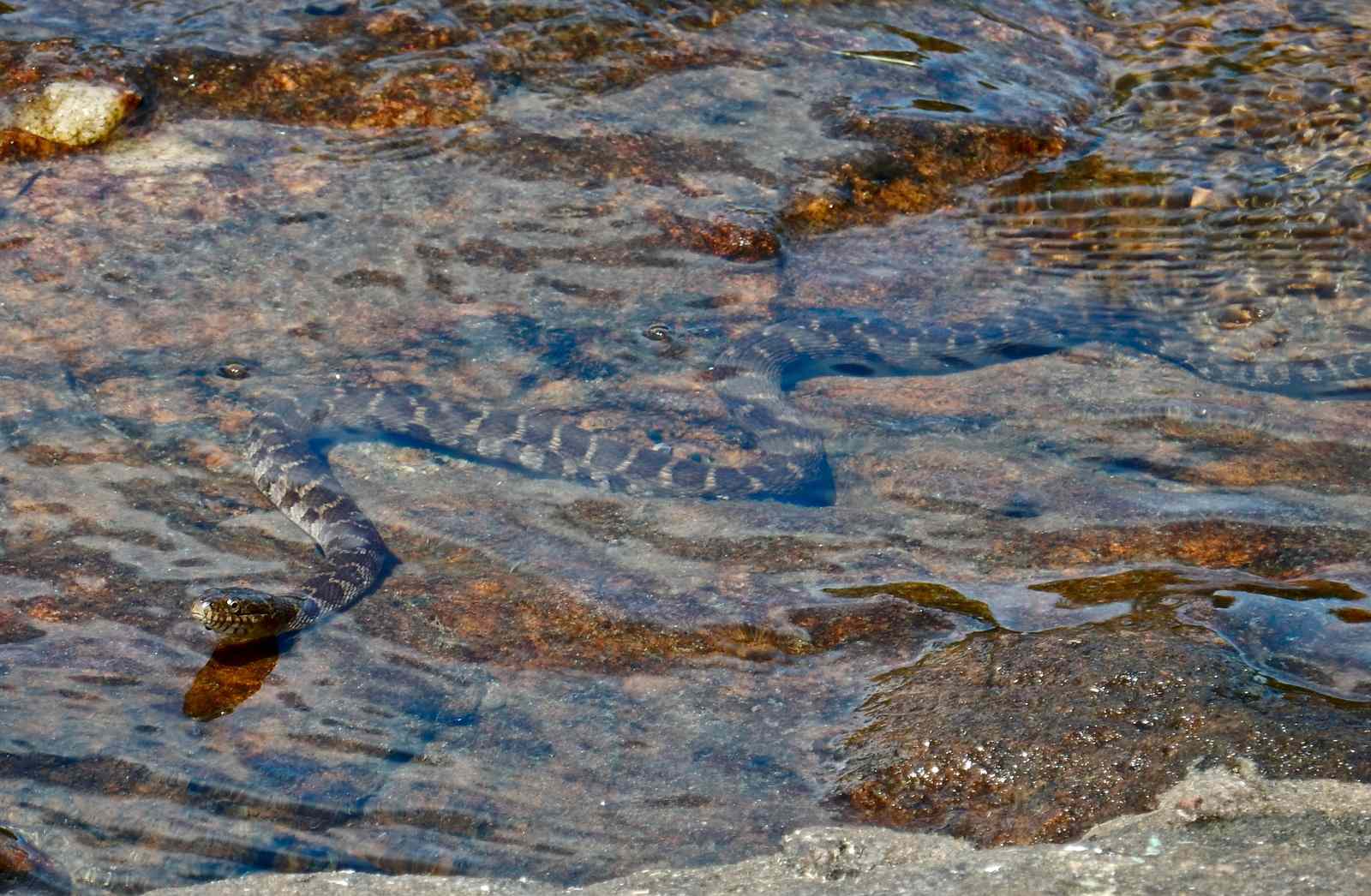 Inland, you will likely hear them slithering on the ground before you see them. Further from the water, you may find them warming up on rocks on a sunny day—they love to keep their body temperatures up. You may even find snake dens near the abandoned buildings and stone ruins on the island.

When you do spot one of Main Duck Islands many serpentine inhabitants, keep in mind that you’re visiting their home, and treat them with respect. As the adage goes, they’re more scared of you than you are of them. 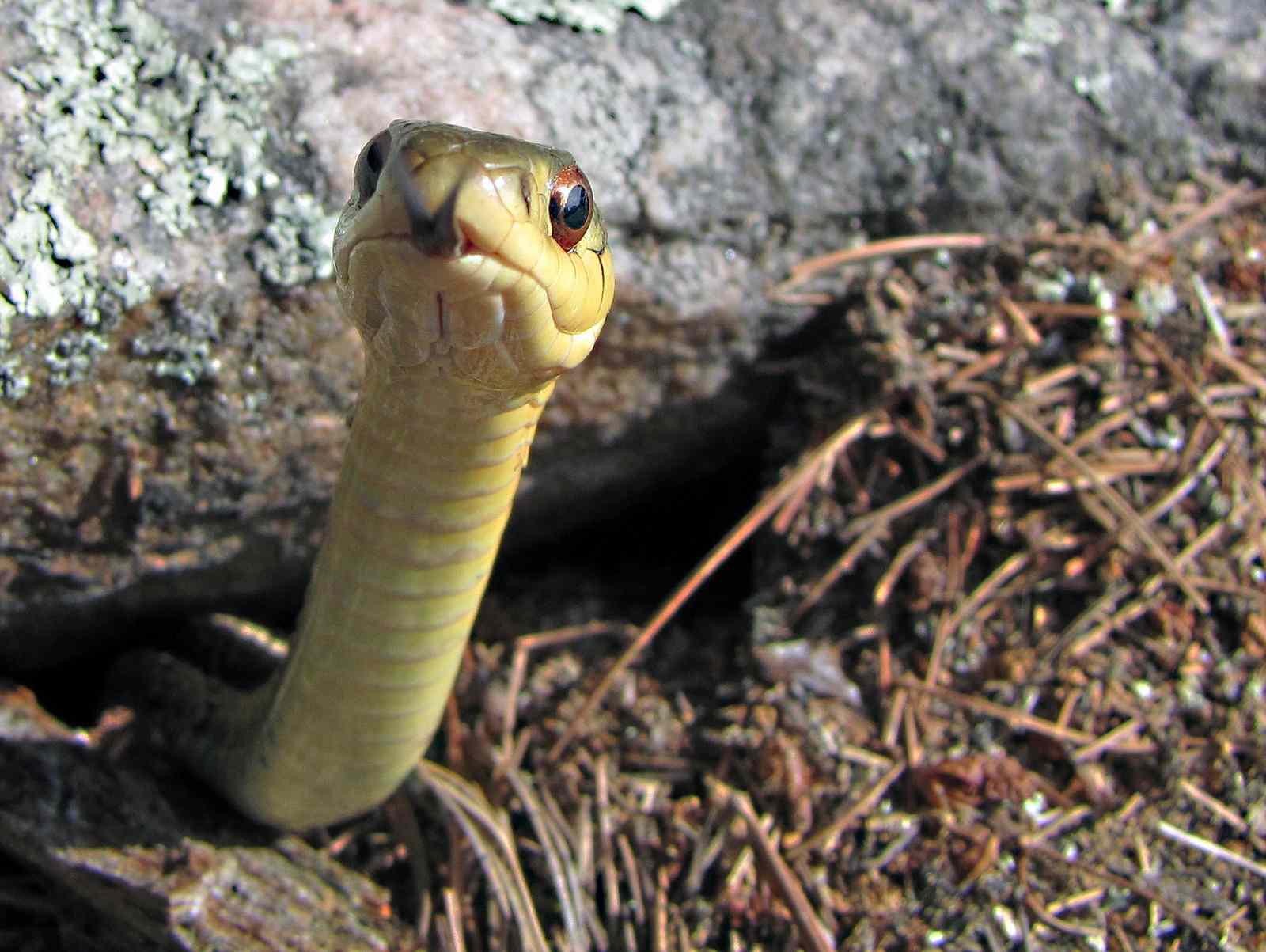 It’s important to note that when feeling threatened, Northern Water Snakes are known to strike. While Northern Water and Garter Snakes are not venomous or harmful to humans, you’d probably rather leave the island with fond memories instead of a nip in the butt. Always treat wildlife with respect.