Frogs can be hard to spot! They are small, skittish, and often very well-camouflaged. You may only know you’ve come near one by the ripple marks they leave behind as they hop out of sight or duck underwater.

If you’re canoeing quietly along the shoreline of river or lake, however, you may be lucky enough to sneak up on a frog:

Here are five common Great Lakes frogs that you might spot in your nearby waterbody. 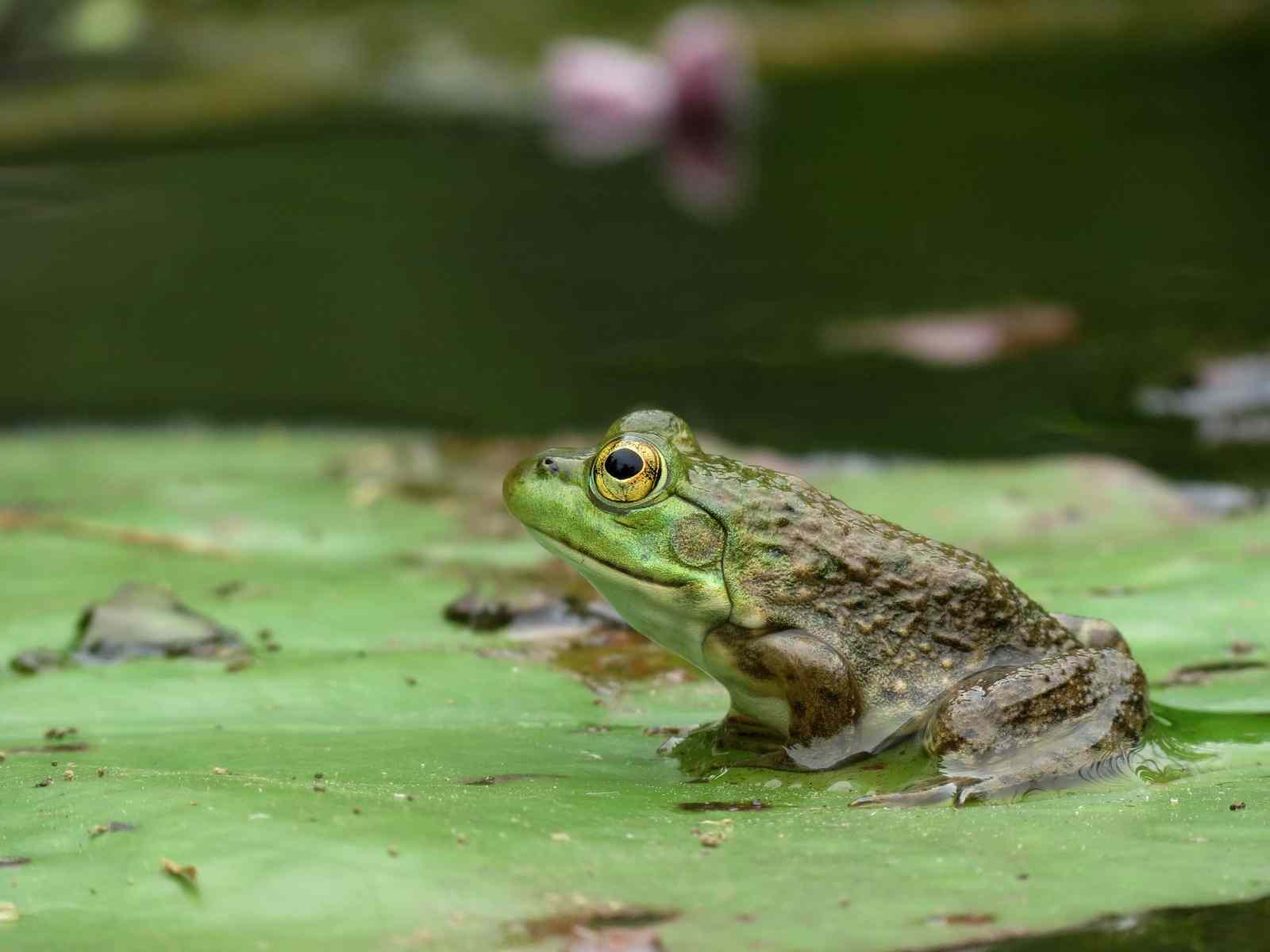 American Bullfrogs are the largest frog species in North America—they can grow up to 17 centimeters long! American Bullfrogs breed in large, permanent bodies of water, but they can also be found in smaller ponds (especially during the summer).

These frogs are known for their deep and mighty croaks which can at times sound like a bull. Bullfrogs are also powerful jumpers. They can jump distances 10 times their body length. 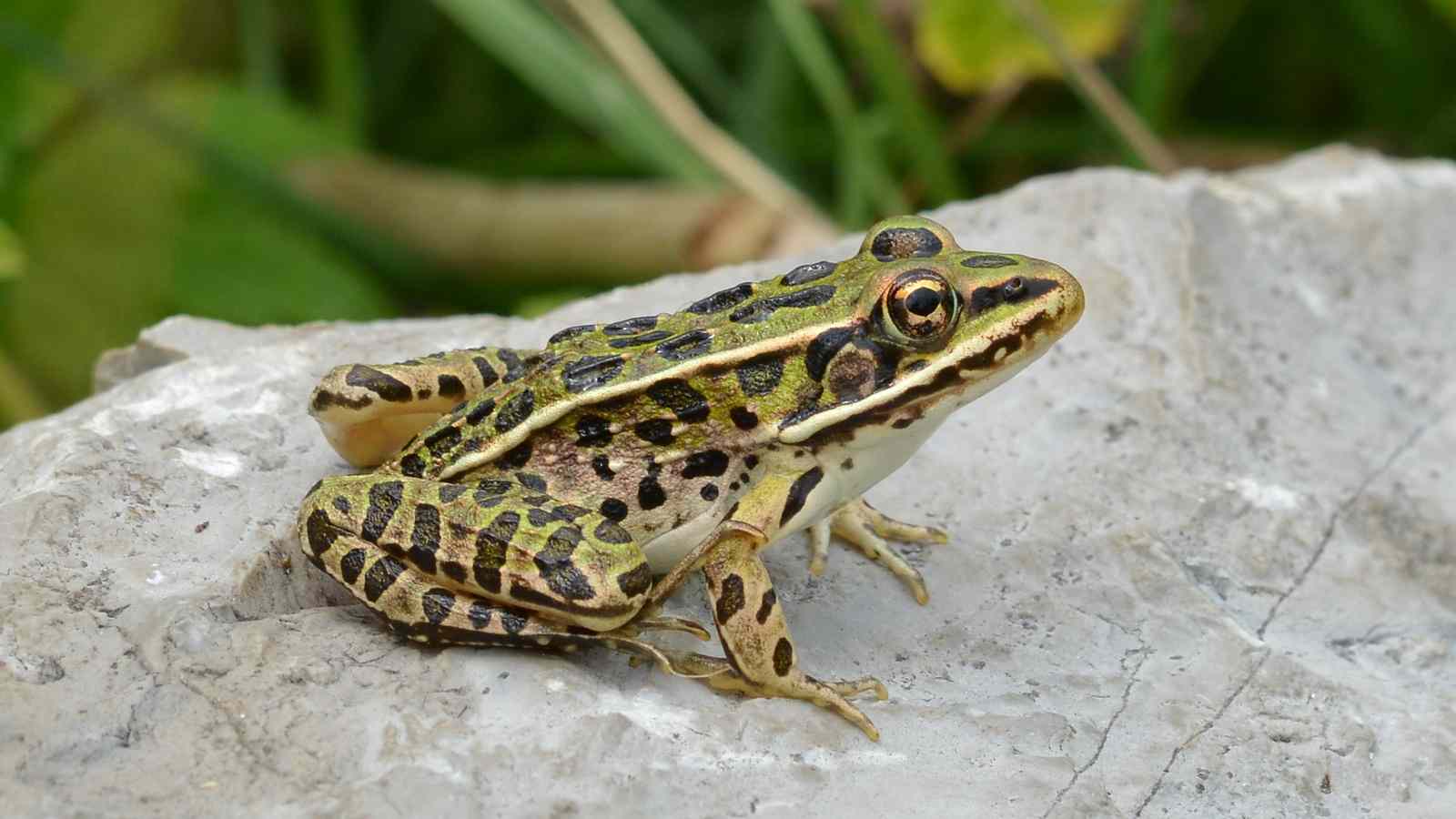 Leopard Frogs are named for the leopard-like spots that decorate their bodies. They live in many different types of habitats, from prairies to woodlands to tundras. They can even survive fairly far from open water.

Leopard Frogs have a rough, low, call which cannot be heard from very far away. So, if you’re able to hear these frogs, they are probably nearby. 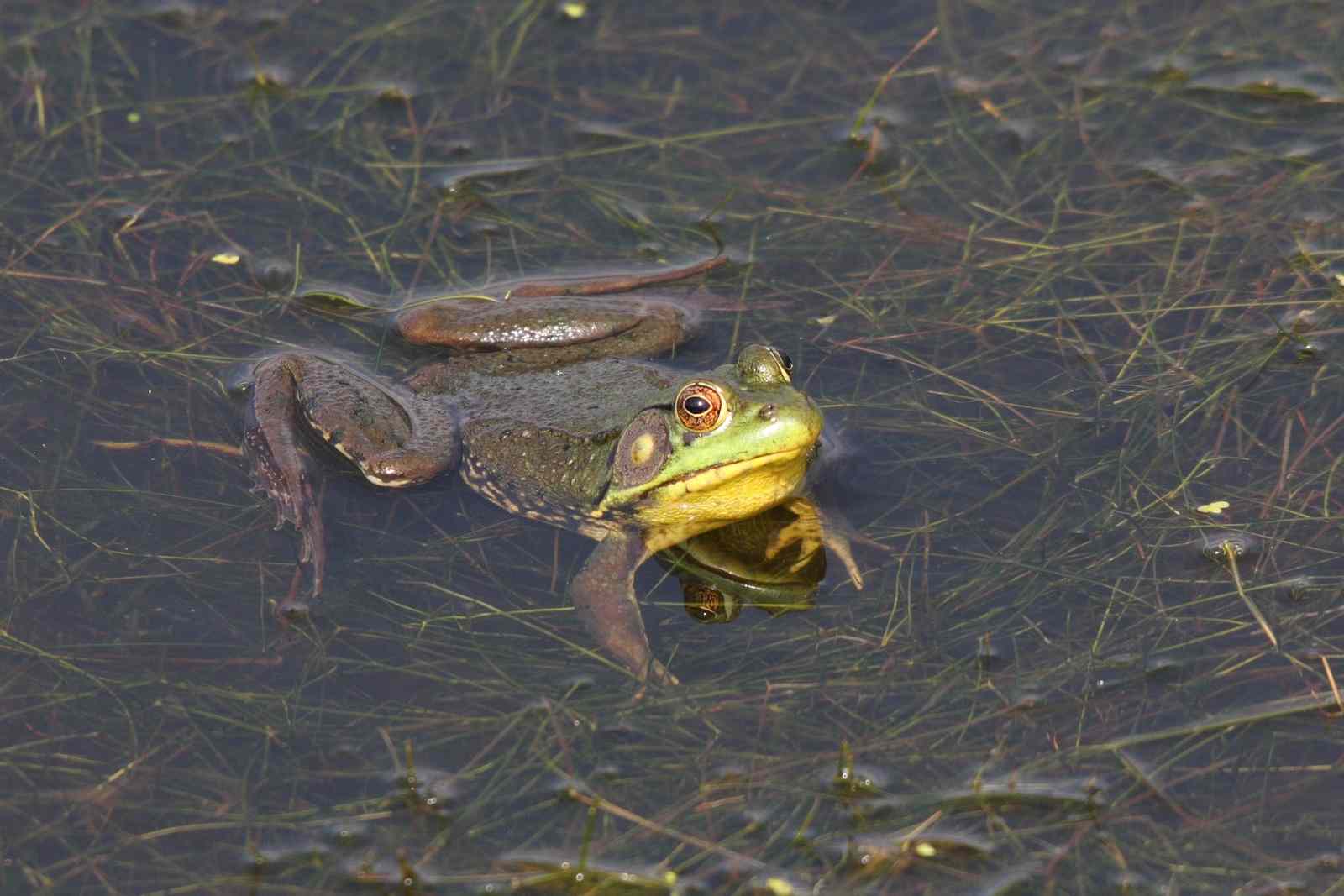 Green Frogs prefer shallow water, like springs, swamps, brooks, ponds, and small lakes. They can even be found in roadside ditches, puddles, and potholes.

Despite being called ‘Green’ Frogs, they may be green, bronze, brown, or any combination of these colours. Green Frog calls are often compared to the staccato sound of banjo string. 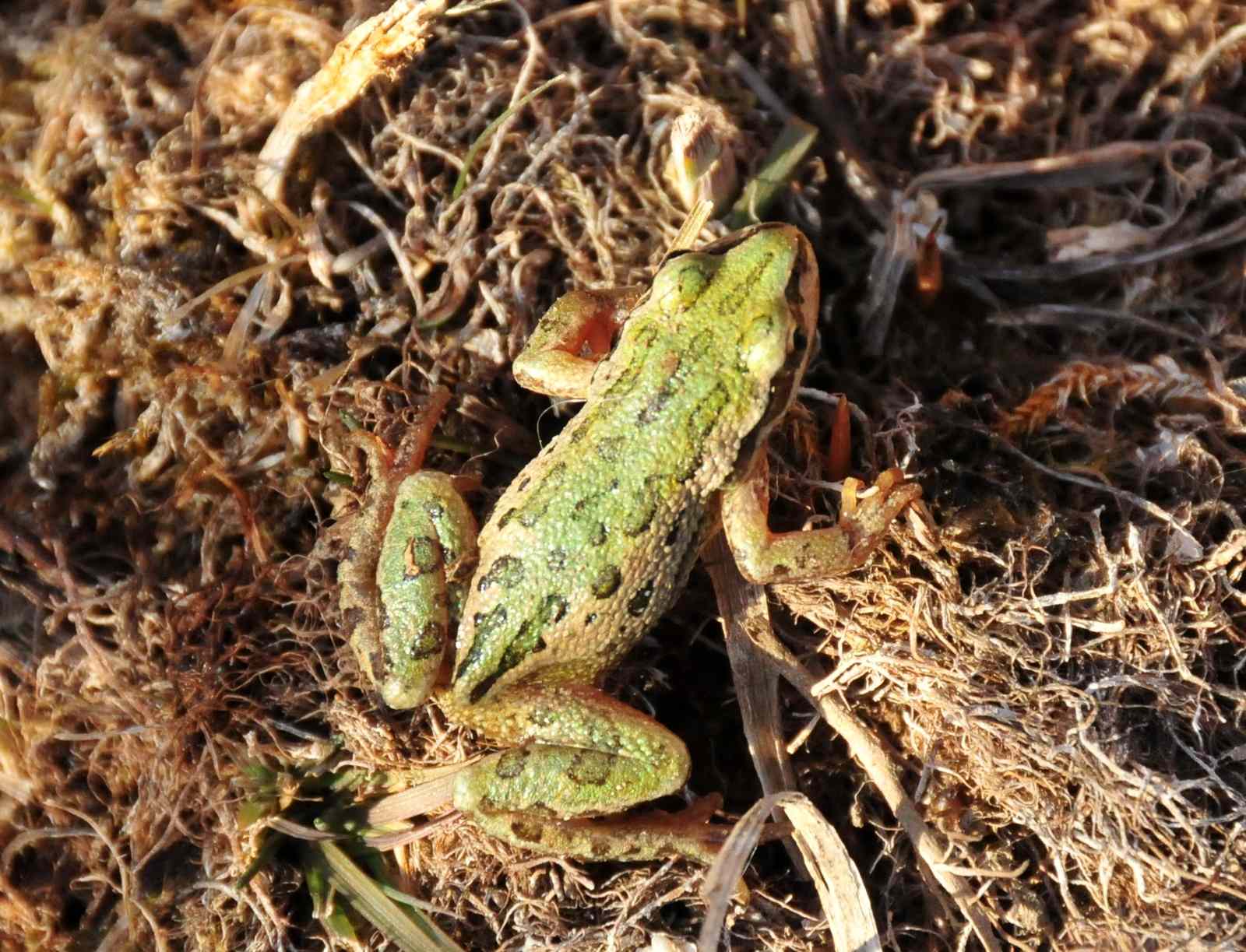 They are often green-grey or brown in colour, with a dark stripe running underneath their eyes. Their chirping call sounds like a comb being stroked. 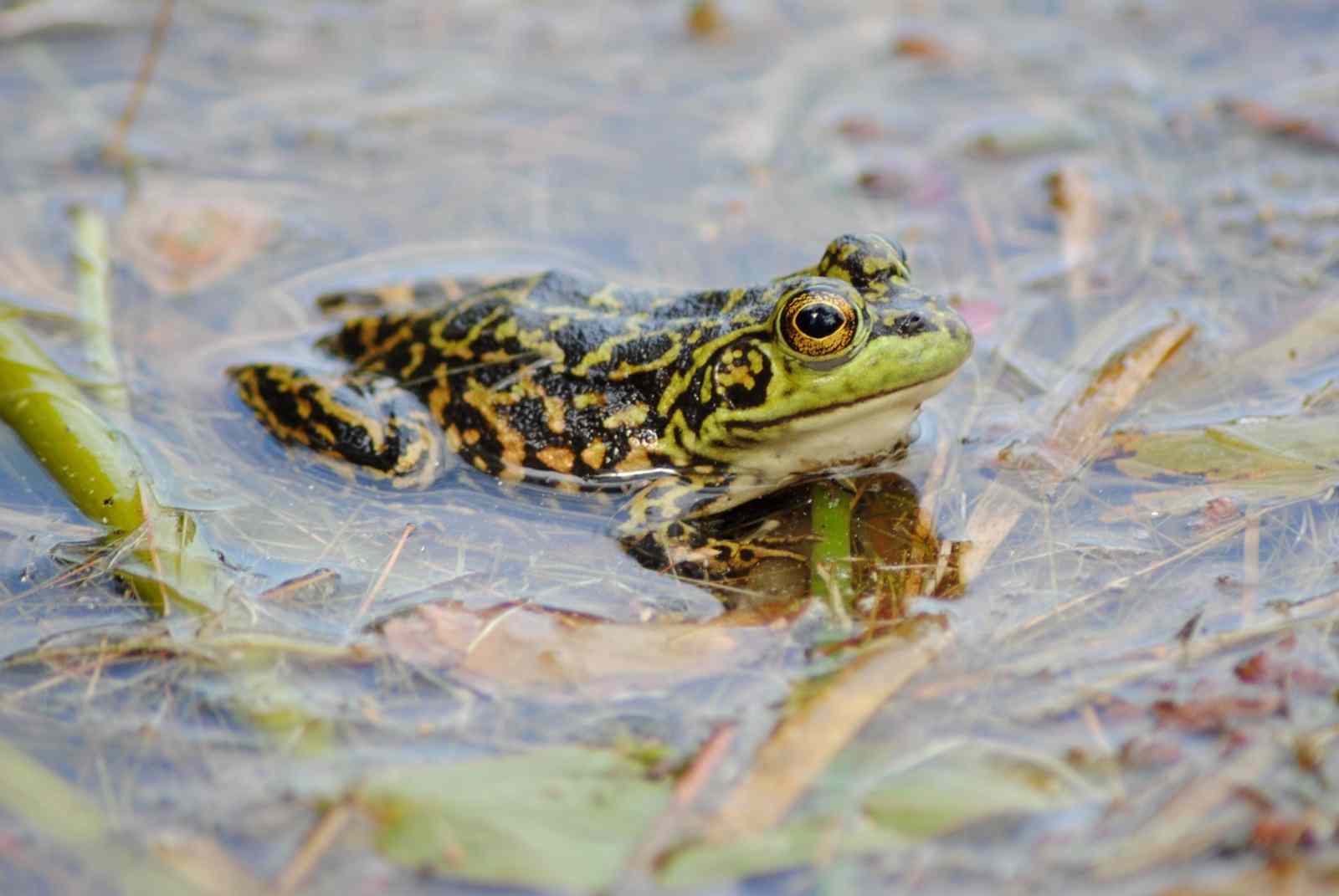 Mink Frogs may look like Leopard Frogs from afar, but their markings are more splotchy than spotted. They are named for their musty smell, which is similar to that of a mink. They are highly aquatic frogs, and usually don’t stray too far from bogs, large ponds, slow-moving rivers, and lakes.

Mink Frogs, like Green Frogs, have a staccato call. However, their calls are throatier, and can sound like light hammering on a wooden surface.

Frogs have semi-permeable skin. This means they are especially sensitive to damaging environmental factors such as pollution.

The frogs living in and around the Great Lakes also tend to stay in one area over the entire course of their lives, absorbing the water around them.

Because frogs are always absorbing their habitats, they are an important indicator species for scientists studying the Great Lakes. The health of a waterbody can be measured by the health of the frogs that call it home.

This is why it’s so important to keep our Great Lakes clean. Do it for the frogs! Frogs play an important role in aquatic ecosystems and both predator and prey. They come in many interesting and distinct species, so count how many you types can spot next time you’re by the water.

Other 'spot these' articles on Great Lakes Guide

Spot these five fish in the Great Lakes

Spot these five waterfowl in the Great Lakes