Are you ready to learn about a true Great Lakes monster?

Here are our top 5 facts about Lake Sturgeon:

Lake Sturgeon can grow to be very old and very huge

Lake Sturgeon can live as long as humans. More astonishing still? They never stop growing. On average, Lake Sturgeon live to about 50-80 years old, but males can live to 55, and females to 150.

Female Lake Sturgeon live much longer than males. Of all the sturgeon that are over 30 years old, 97% are female. 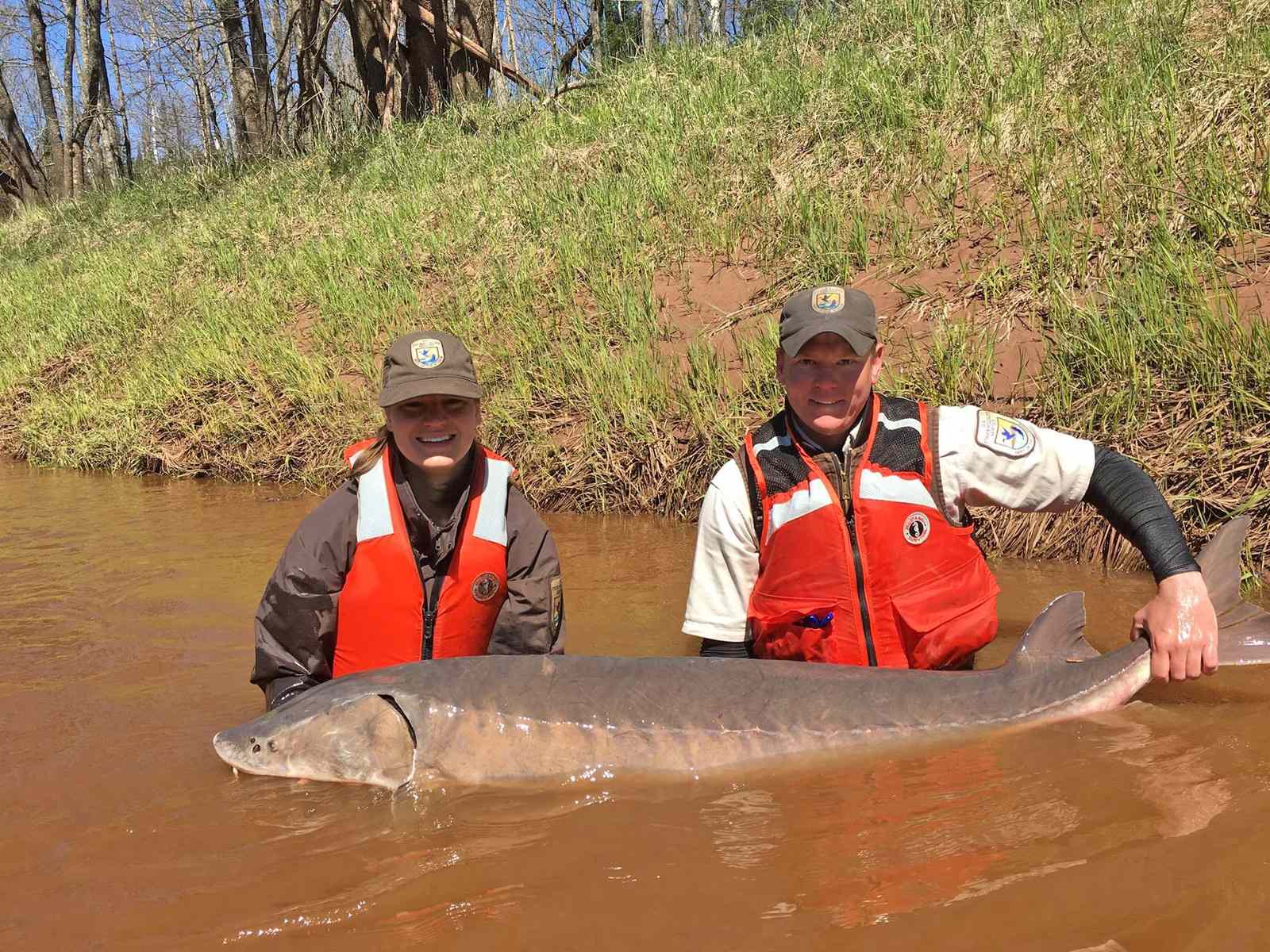 Some Lake Sturgeon have grown to be two meters long and have weighed in at a whopping 310 pounds. These fish are so enormous, they’ve been mistaken for various Great Lakes monsters over the centuries.

My grandmother recalls seeing a sturgeon that her father had caught when she was a small child. “I went out to the back shed and saw an enormous shape hanging from the shed door. I thought it was a deer! The thing was so big. But when I got closer I realized that it was a massive Lake Sturgeon.”

Lake Sturgeon have inhabited the Great Lakes for 10,000 years. They’re one of the oldest species on the planet, belonging to a fish family that dates back 200 million years (this means that their ancestors lived among the dinosaurs!). Lake Sturgeon are descendants of prehistoric fish, and they definitely look like relics of another era. 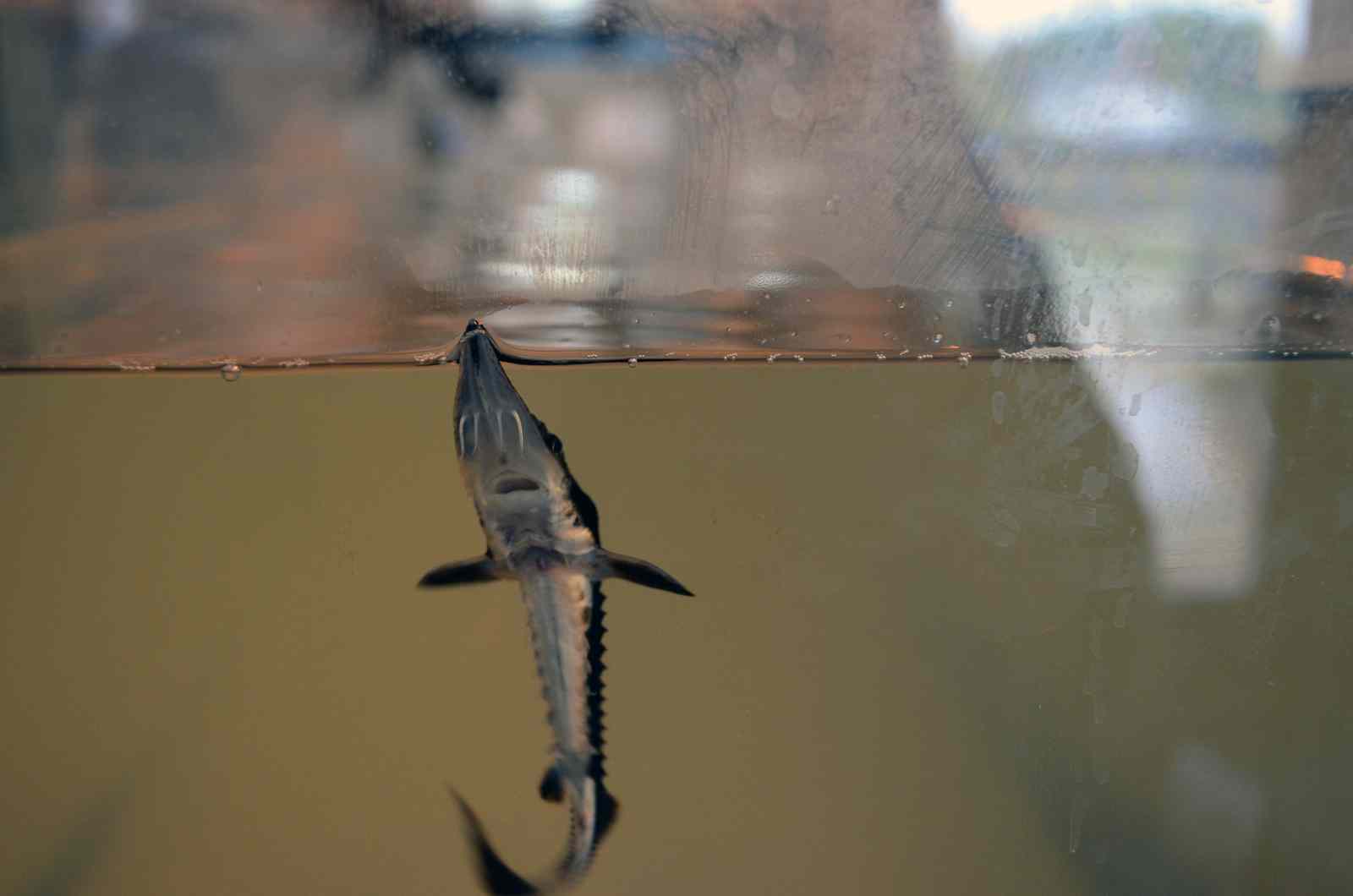 Lake Sturgeon may grow to be large and fearsome-looking, but their ‘blub’ is worse their bite.

Lake Sturgeon are actually known for being shy and docile. In fact, they don’t even have teeth. Lake Sturgeon use their vacuum-like mouths to eat insect larvae, small crustaceans, and fish from the bottom of the lake. 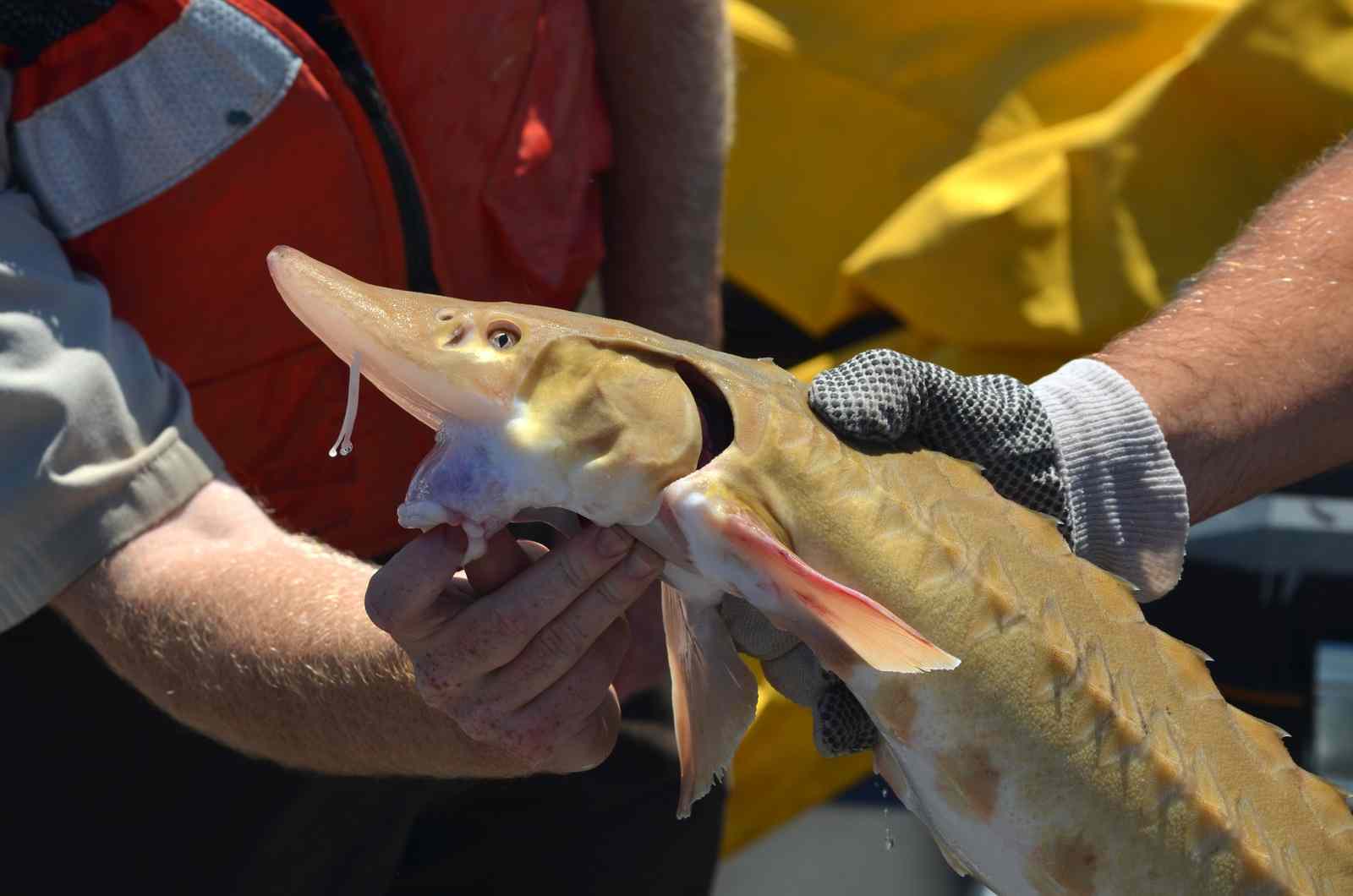 Lake Sturgeon are an important part of Indigenous culture

Groups like the Huron and Anishnabeg have eaten these fish for centuries, and the northern Ojibwe would sell sturgeon to traders.

Lake Sturgeon were also a key part of social feasts, ceremonies, and customs. Huron fish preachers would summon Lake Sturgeon as part of a fishing ritual to ensure a fruitful catch. 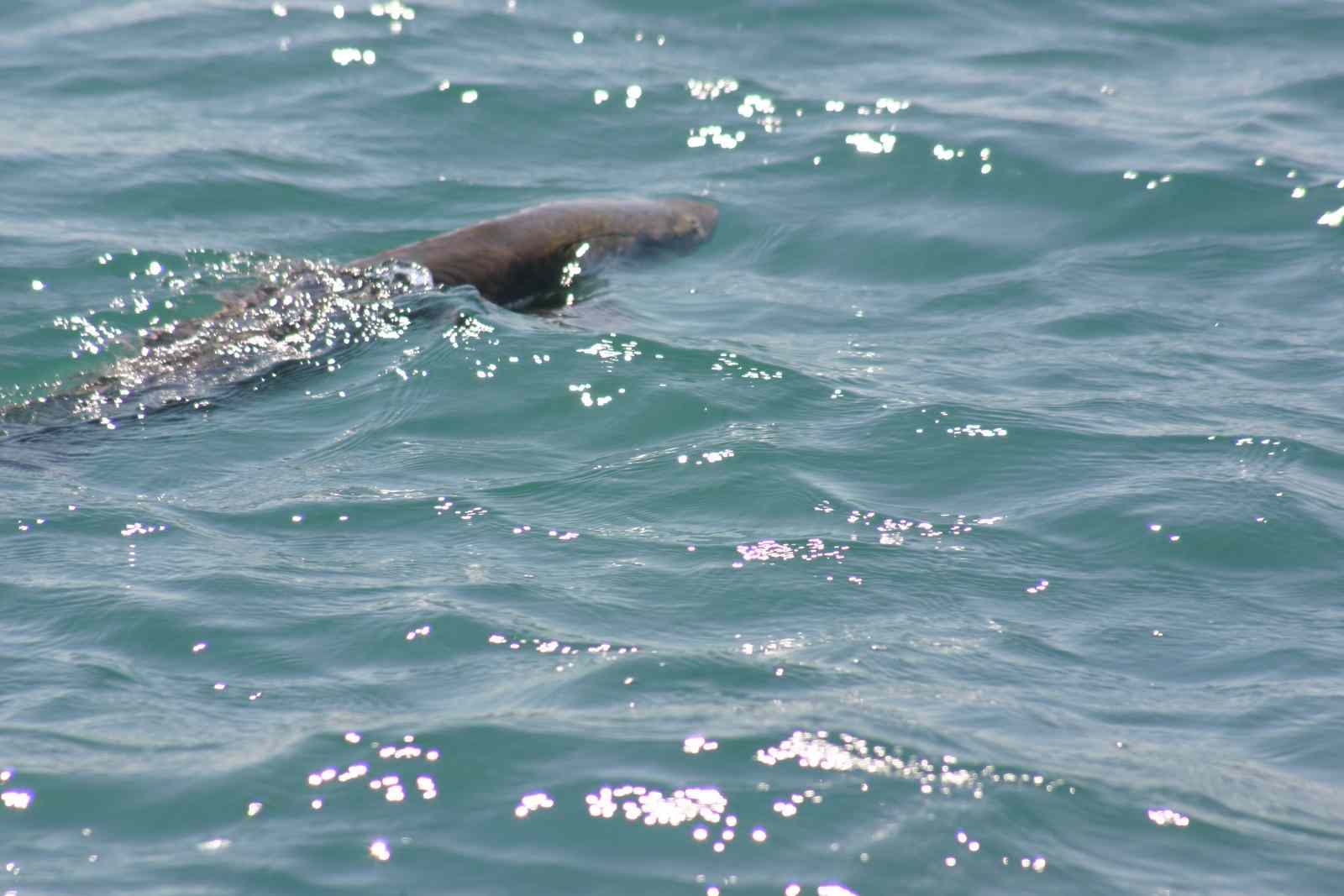 Once caught, no part of the fish was wasted (modern fisheries, take note). First Nations people used Lake Sturgeon bones as needles, spearheads and arrowheads, and isinglass (a gelatin from dried swim bladders) to make glue and paint.

Swim bladders are the gas-filled organs that control buoyancy and allow fish to float.

Lake Sturgeon are playful and intelligent

Some scientists have seen Lake Sturgeon display individual personalities, such as inventive feeding strategies and playfulness. Lake Sturgeon have been seen tail walking (‘walking’ on their tails on water’s surface) and porpoising (jumping up in the air).

They’re basically the dolphins of the Great Lakes!

Sadly, some scientists believe that rather than being an act of joy, this spirited behaviour is intended to shake off Sea Lampreys. 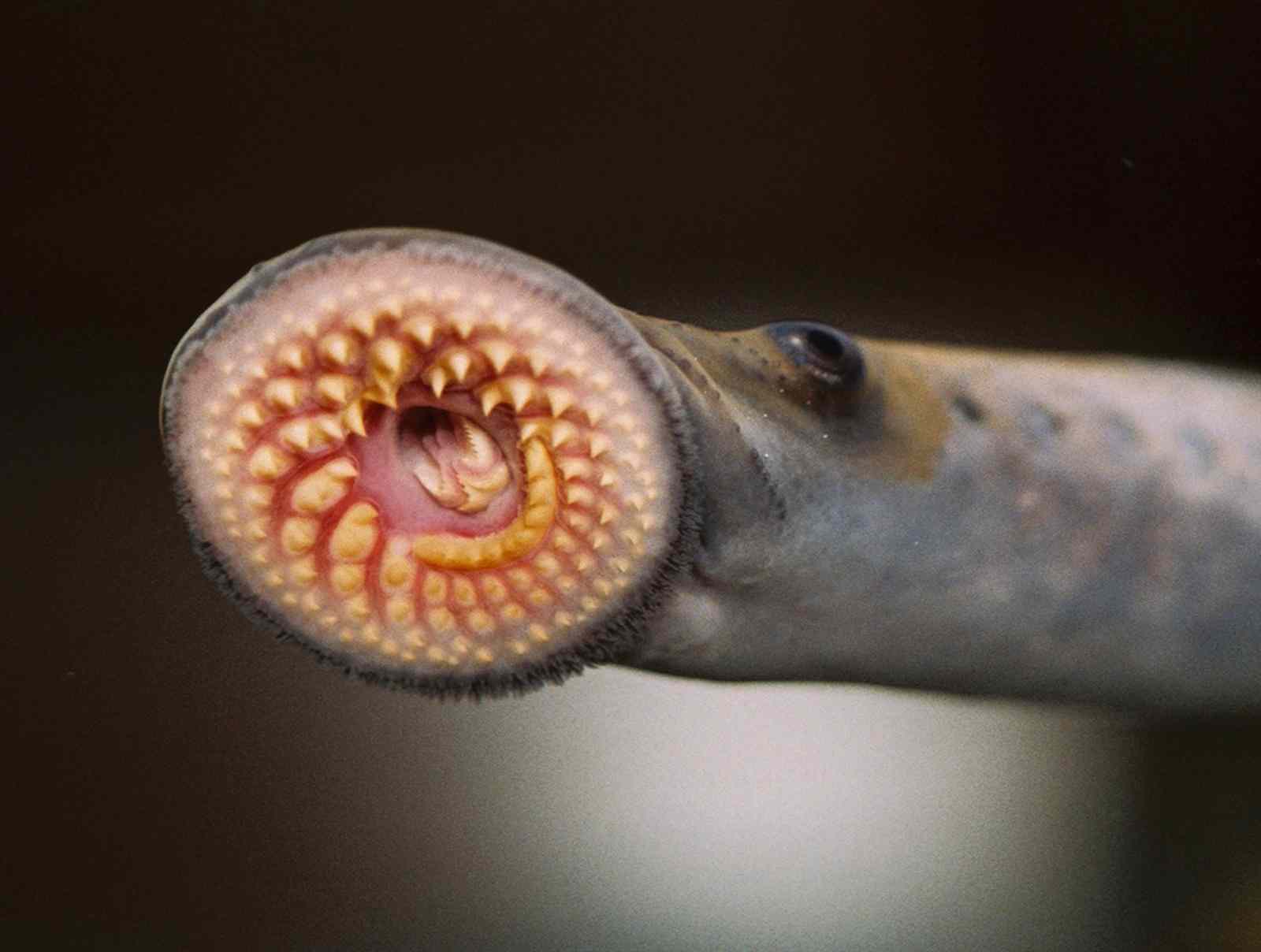 Sea Lampreys are a parasitic invasive species in the Great Lakes. They have rows upon rows of sharp teeth and a razor-sharp tongue. These suction-y little scumbags can kill up to 40 pounds of fish during their year to year-and-half-long feeding periods.

Invasive species are only one of the many threats facing Lake Sturgeon.

In the Great Lakes and St. Lawrence River region, Lake Sturgeon are classified as at-risk or endangered. The idea that such an archaic and incredible species could one day be lost is unthinkable.

In the past, Lake Sturgeon populations declined due to overharvesting, dams, habitat loss, and poor water quality. Today, the species is threatened by overharvesting, pollution, climate change, habitat degradation, and dams that block access to spawning and rearing sites. 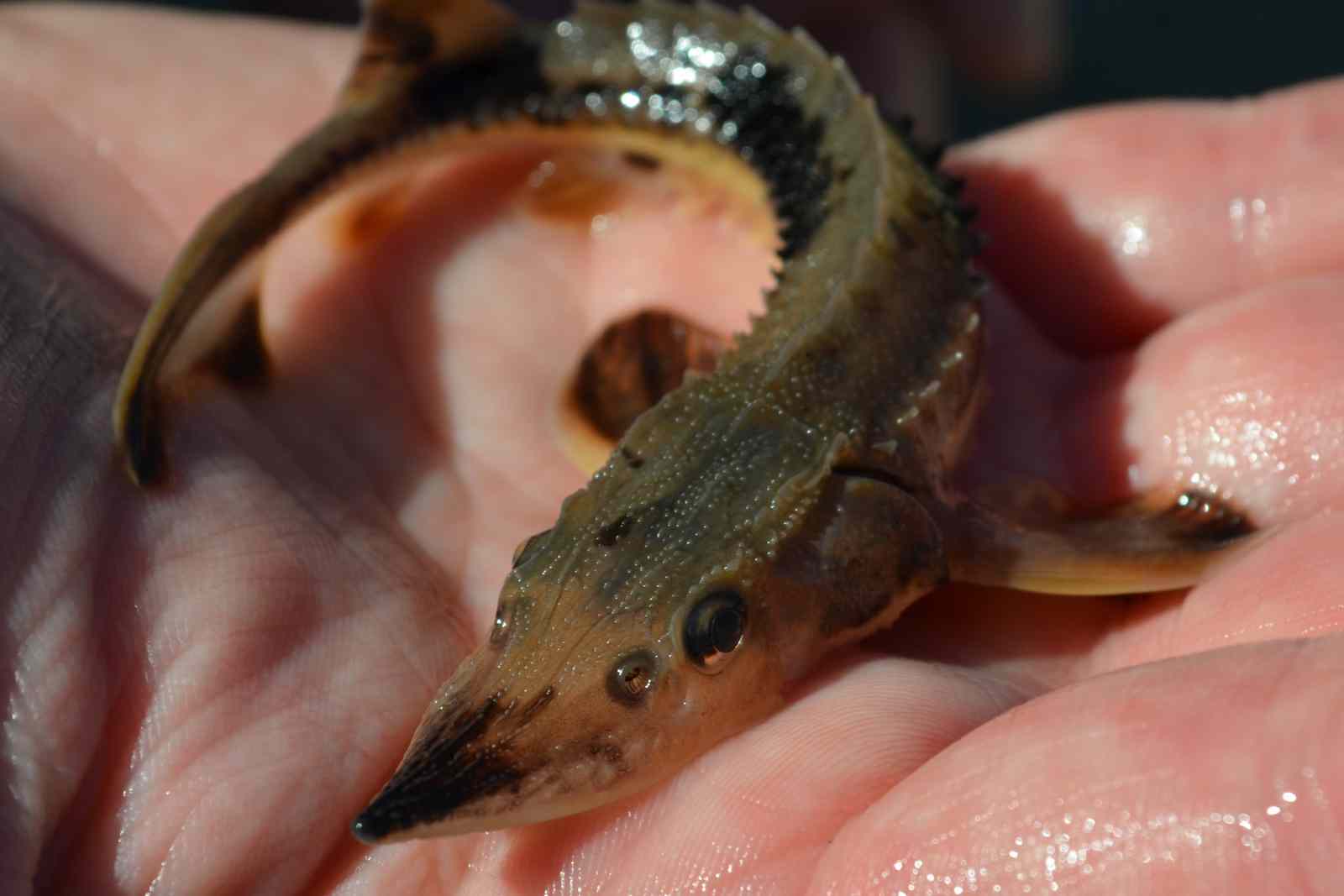 Because Lake Sturgeon live for so long and have precise habitat requirements, their health is an indicator of the health of our lakes. Although Lake Sturgeon still face many threats, populations in the Great Lakes appear to be reviving.

It seems only fitting that members of the Waterkeeper Alliance often use this extraordinary and resilient fish as a symbol of the work they do. Waterkeepers, like our very own Lake Ontario Waterkeeper, strengthen and expand a global movement to safeguard swimmable, drinkable, fishable waters for all.

If you’re lucky enough to spot one of these fascinating fish, report the sighting to the Natural Heritage Information Center along with where you saw it and and a photo. This will help to support biodiversity conservation efforts.