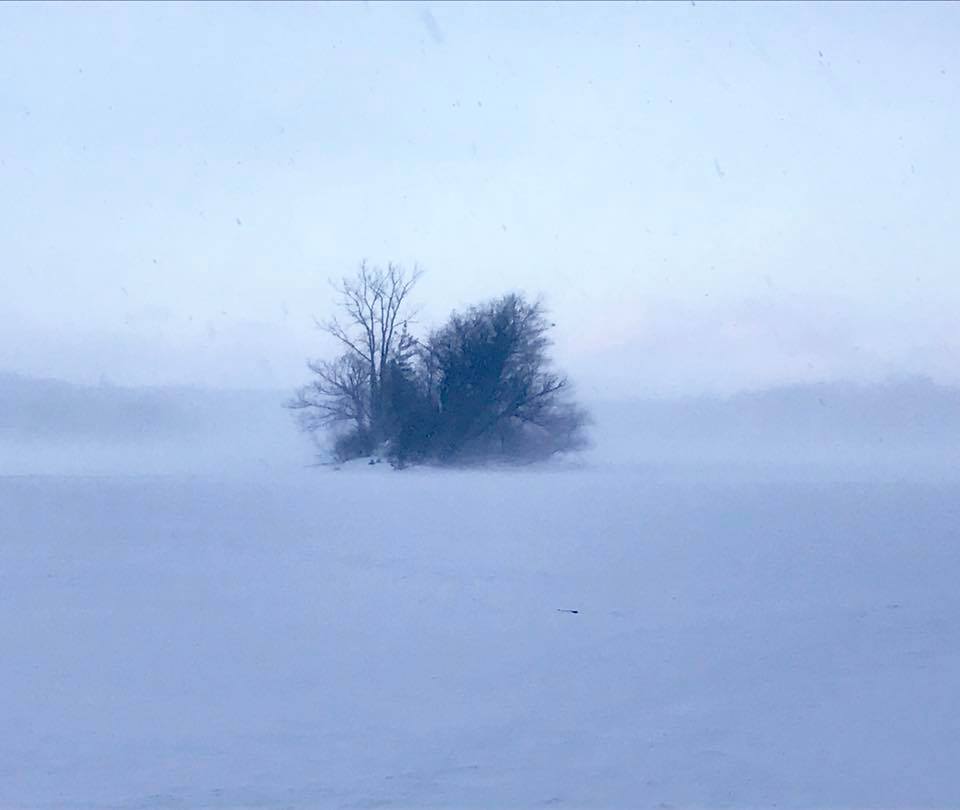 Previous Next
The Great Blue heron is wading near the shore up to its skinny ankles, sticking its sharp beak into the dark water, catching small delicious things. I can see its pale froggy throat swallowing. It turns to look at me, then returns to eating. On the bank above, there’s a skuttling sound. A small raccoon runs away from the water and hides behind a tree. It looks out with steady eyes. It sees me but it doesn’t seem frightened but watchful. Nestled under its arm, an even smaller raccoon. A baby. They both purr. I’m in a small cove, a bight, a calligraphic curl in the shoreline, amidst lily pads, floating logs, water striders and the intermittent glurp of surfacing fish. I’m trying to remain as quiet and still as I can. I’m kayaking in Cootes Paradise, a kilometre from where I’ve lived in Hamilton, Ontario for nearly 30 years. A few minutes before, I rested my paddle on the kayak and had a picnic on the water, watching the sky become a delicate pink as the sun moved closer to the horizon, which in this case, is the Dundas branch of the Niagara Escarpment. I saw a few beavers, a water vole. Countless types of birds—though not the Bald Eagles which have returned to nesting here. I saw a huge bank filled with holes. I think maybe the home of all these tiny swifts filling the sky around me. I watched the swans. There are two kinds here, about fifty or sixty individuals in total. The endemic Trumpeter swan and the “settler” Mute swans. If I couldn’t tell the different (the Trumpeters are the ones with the all-black beak, the Mute swans have a ducky orange one) I’d be able to tell because the Trumpeters are tagged and numbered. Scientists are monitoring them as they are trying to reestablish this native species.

In fact, all over Cootes Paradise there are signs of restoration and recovery and indications of the work of conservationists and scientists. Cootes used to be a marshland. In the 19th c. there was a canal cut through the reeds and rushes so that boats could get to Dundas. And of course, the pressures of industry, hunting and invasive species in the years since turned it into something else entirely. However, the change over the last decades is apparent. I’ve watched it with awe and gratitude. The marshes are returning. There are carp barriers to stop the invasive and bottom-feeding carp from bullying out other fish and ravenously eating plantlife. There’s still much work to be done. After the recent heavy rains, overflow sewage flowed from the holding tanks under Cathedral Park into Cootes. I know this is something scheduled to be fixed in the upcoming years at cost of some millions. It is, of course, vital. It is astounding that we could have allowed this happen in the first place. On my street, when the drains are pushed beyond capacity, household waste overflows into connected sanitary and storm sewers. But still, I feel the huge energy from a place coming back to life, to returning to strength. It’s never going to be what it was before the city, perhaps when the original people lived here—there are signs of the Princess Point people who were here 1500 years ago. A strong and healthy body of water to be a bulwark against the destructive forces of the city, to maintain an adaptive balance.

Once, the poet David W. McFadden, who was from Hamilton, wrote a blurb for one of my books. “Another breath of fresh air from Hamilton, Ontario,” he said. He meant he was one breath of fresh air, and I was another. It was a great joke, especially in the 90s. But Hamilton is changing and so is its air. And its waters. The diversity and range of species in Cootes Paradise is a testament to this. The ever-cleaner water. I walk the trails around its shores. I kayak on its open waters and creeks. As a poet, I write about the remarkable array of species to be found there, many are there because it is a significant migratory bird flyover zone. I’m awed and inspired by the fact that I live in a large city close to even larger cities and yet all of this is so close to home. True, I can hear the cars and trucks driving on the always-busy 403, driving over the High-Level bridge, but as I head west and paddle toward Spencer’s Creek or around a point, the sound of traffic disappears and there’s only the sounds of splashing water, wind in the marsh reeds and surrounding trees, birds, animals. Besides, there’s something, if not lovely, then really apt, about the sound of the city mixing with the skittering, twittering, chirping, sloshing sounds of the marsh. This is a beautiful, inspiring, complex place and we’re in this together.