With the longest shoreline of all of the Great Lakes, Lake Huron is one of the most unique lakes on Earth. It is the second largest of the Great Lakes, and the fourth largest lake in the world by surface area. Huron is renowned for its beaches, sand dunes, wetlands, forests, and extensive river systems. Its coves, channels, and bays are steeped in history, including the hundreds of shipwrecks that lie beneath its surface. The bright turquoise waters will invite you to explore all that Lake Huron has to offer.

Lake Huron in a nutshell: 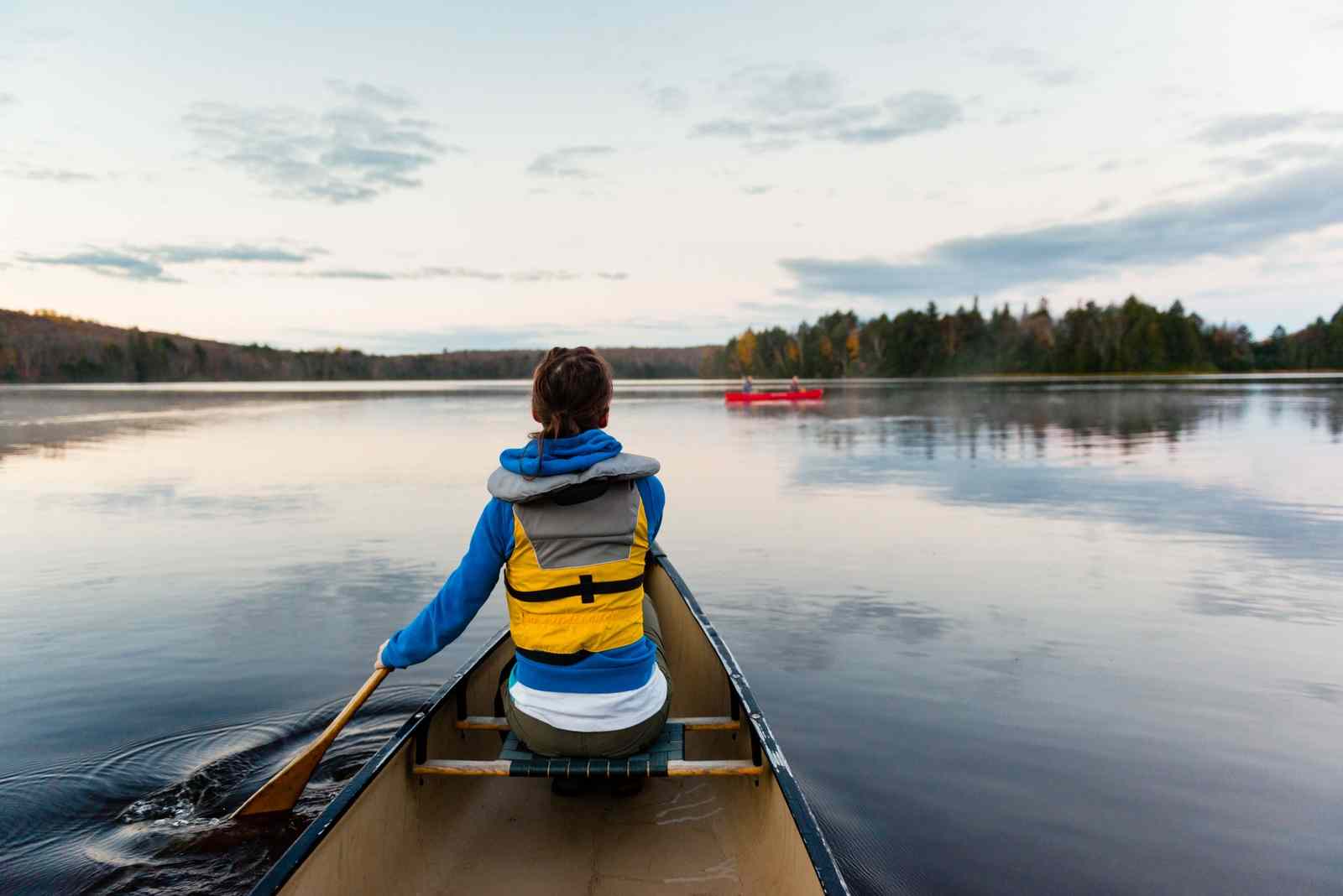 Why is Lake Huron so important?

Lake Huron provides drinking water, recreation, livelihood, and food to approximately 3 million people in Canada and the U.S. combined. It supplies drinking water to approximately 1.4 million people in Ontario and is home to many rare and endangered plant and animal species. Long freshwater beaches, fragile forest ecosystems, and imposing rock formations weave together with bright turquoise waters to form the Lake Huron Watershed.

Lake Huron is said to host some of the most beautiful sunsets in the world. 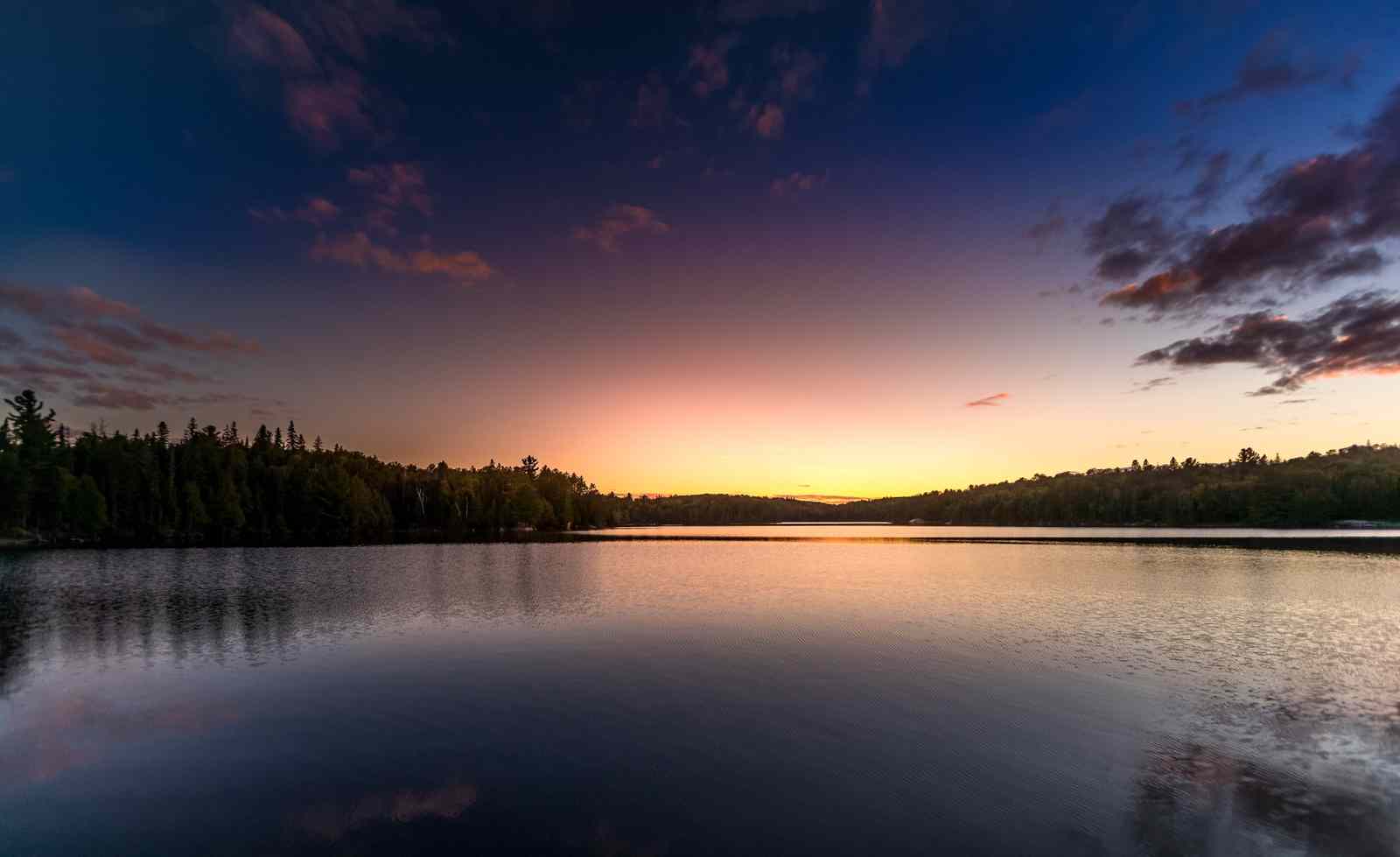 Lake Huron is home to a wide variety of fish, bird, and plant species and has maintained much of its wild state, compared to the more urbanized lakes of the south. In fact, a whopping 68% of the watershed is forested, including the rare Carolinian forests. These fragile forests, with their sweeping broadleaf deciduous trees, have a rare beauty — particularly in the autumn months when the leaves change to vibrant reds and yellows.

Alongside these forests are some of the longest beaches in the world, including Sauble Beach (11 km or 7 mi) and Wasaga Beach) (14 km or 8.7 mi). Many of Lake Huron’s beaches are made up of rare and fragile sand dune systems. These winding dunes are home to many rare plant and animal species, including the Bluehearts Flower, the Five-Lined Skink (lizard), and the Huron Grasshopper. In fact, one-third of Canada’s rare species are found in the Lake Huron Watershed, many of which are not found anywhere else in the country. 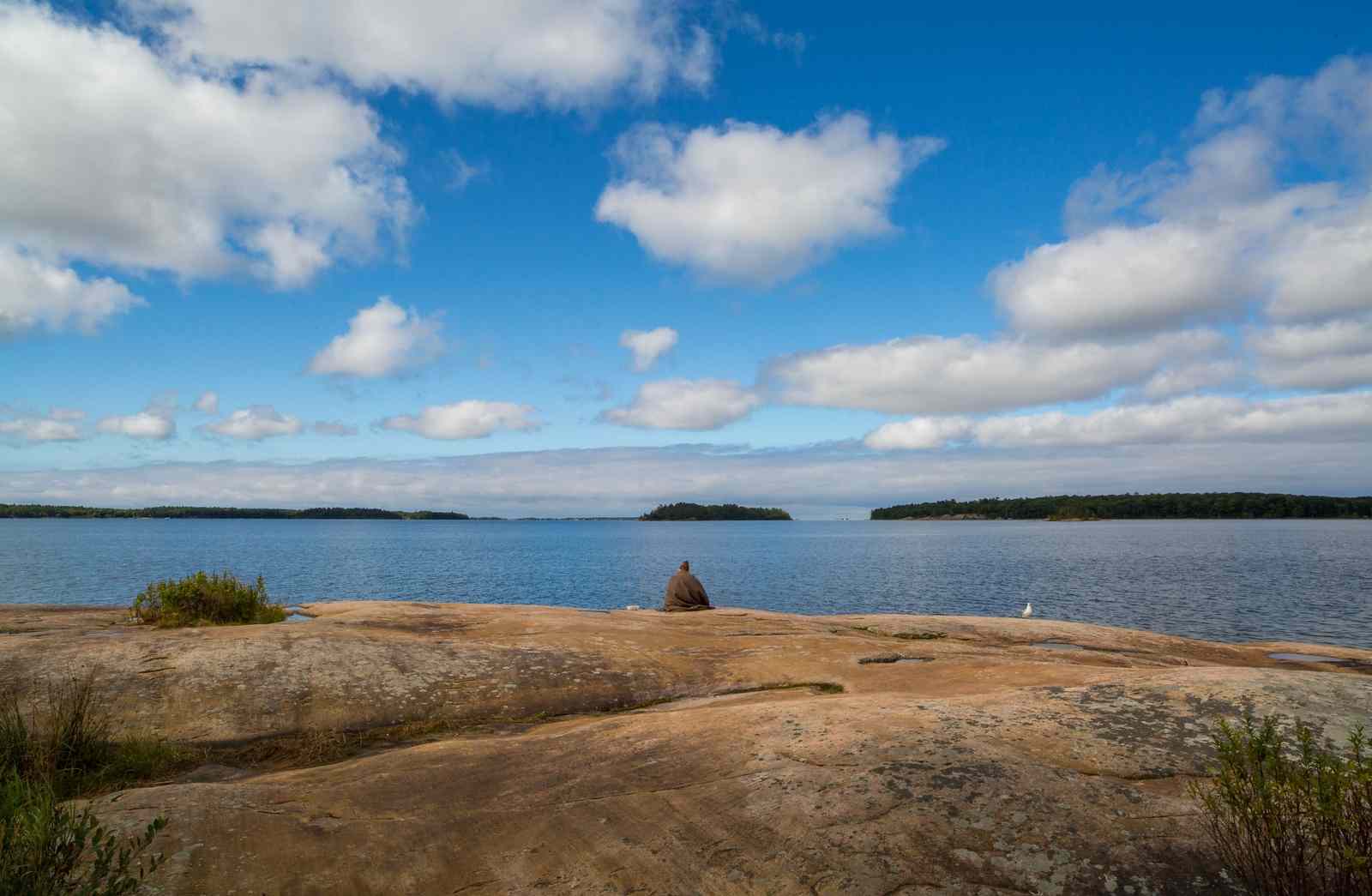 Huron has some of the most popular recreational spots in the summer, with water temperatures that can reach approximately 23° C (73° F).

Since Huron has such extensive forested areas, many regions have been heavily forested by the lumber industry. Lumber and fishing industries are critical drivers of the region’s economy, with Lake Huron being the second-most prolific fish producer of all the Great Lakes. There are also many beef and dairy farms along the Bruce Peninsula on the eastern side of the lake.

Over the years, there has been heavy commercial traffic throughout the lake, since Huron forms part of the St. Lawrence Seaway. Most of the supported industries include grain, iron, and limestone. In fact, the world’s largest limestone mine sits on the shore of Lake Huron (Calcite Quarry in Michigan) as well as the world’s largest salt mine, located in Goderich, Ontario. 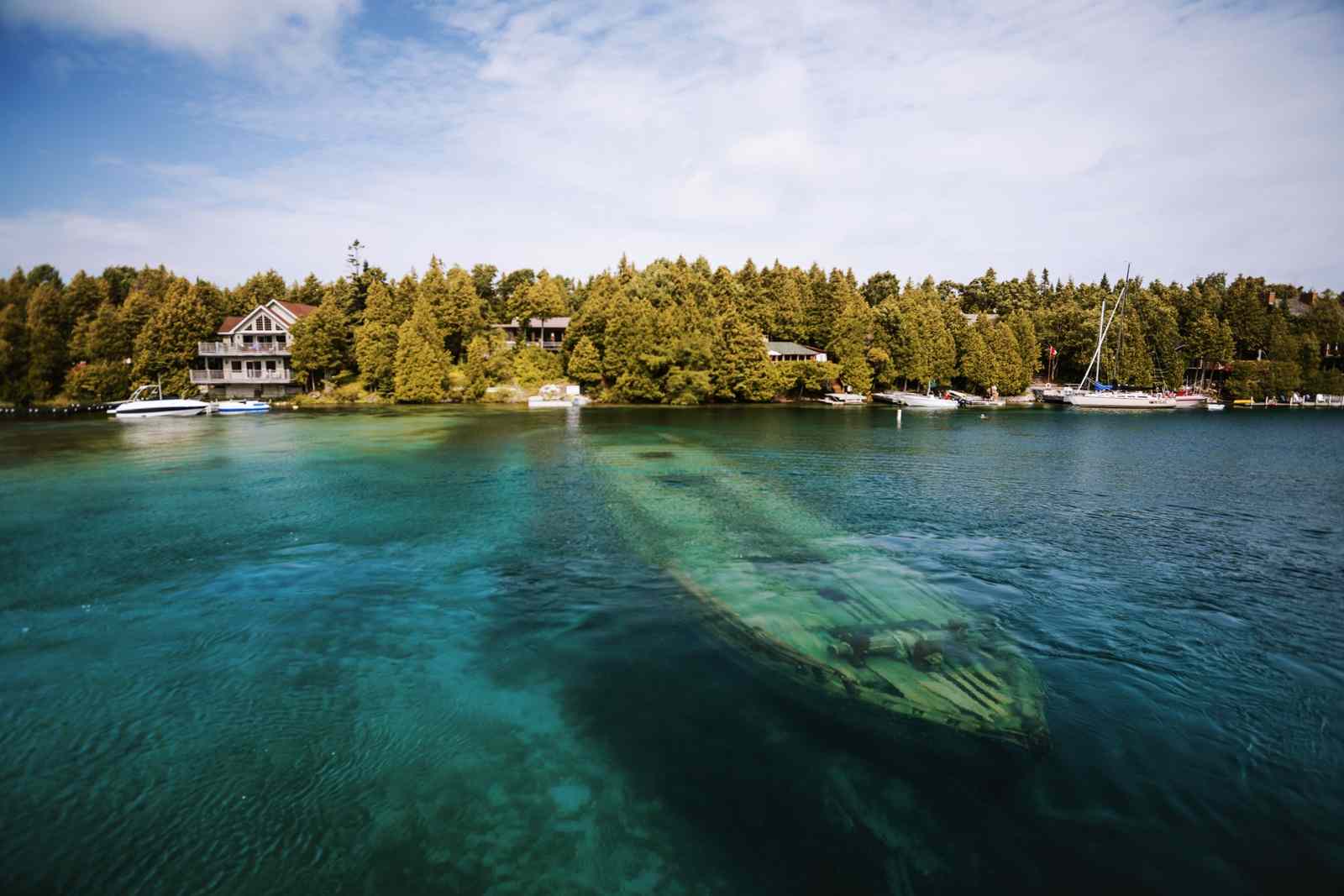 Lake Huron is situated between Lake Michigan and Superior to the north-west and Lake Erie to the south. In fact, Lake Michigan and Lake Huron are connected by the Straits of Mackinac (pronounced “mack-in-aw”) at the same elevation, so they can technically be considered one big lake!

Lake Huron is bordered by Michigan in the U.S. and Ontario in Canada. The rocky shores are made up with the precambrian Canadian Shield (an exposed portion of the Earth’s crust that lies beneath most of North America) covering much of the northern and eastern coasts. On the southern shores, glacial deposits of sand and gravel dominate the landscape. 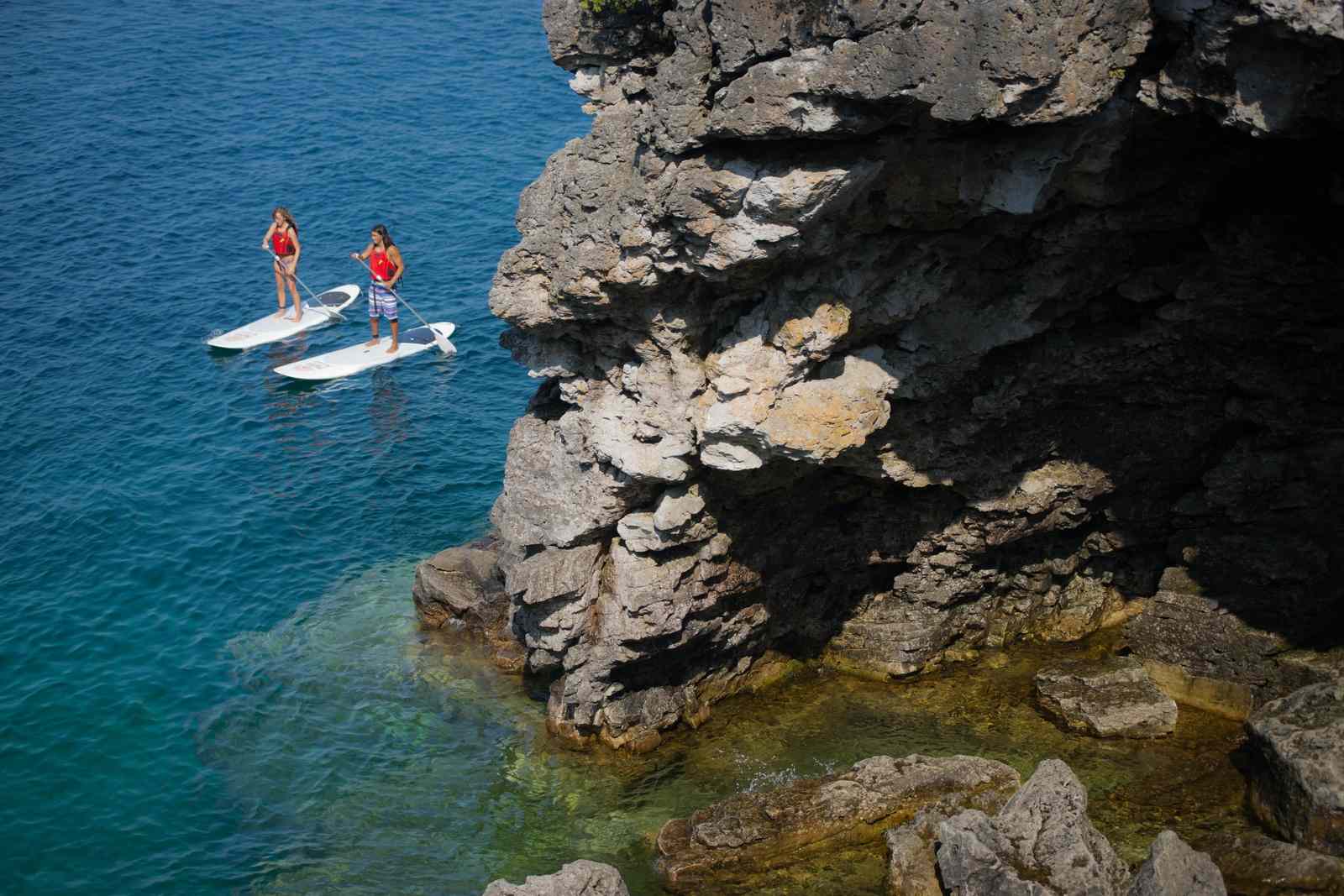 Lake Huron is renowned for its sand dunes, rugged shorelines, coastal wetlands, diverse river systems, dense forests, and impressive collection of islands. Lake Huron boasts over 30,000 individual islands — more than any other Great Lake — giving Huron the longest shoreline of all the Great Lakes (over 6,100 km or 3,790 mi). Among these islands is its largest, Manitoulin Island on Georgian Bay. Manitoulin, the largest freshwater island in the world, has over 100 freshwater lakes of its own!

The extensive shoreline is dotted with rare sand dunes and unique rocky grottos and outcrops. Flowerpot Island (at the tip of the Bruce Peninsula) has incredible rock structures resembling flower pots that decorate the shoreline. These structures are made of layer upon layer of sedimentary rock that has been eroded over time by wind and waves. 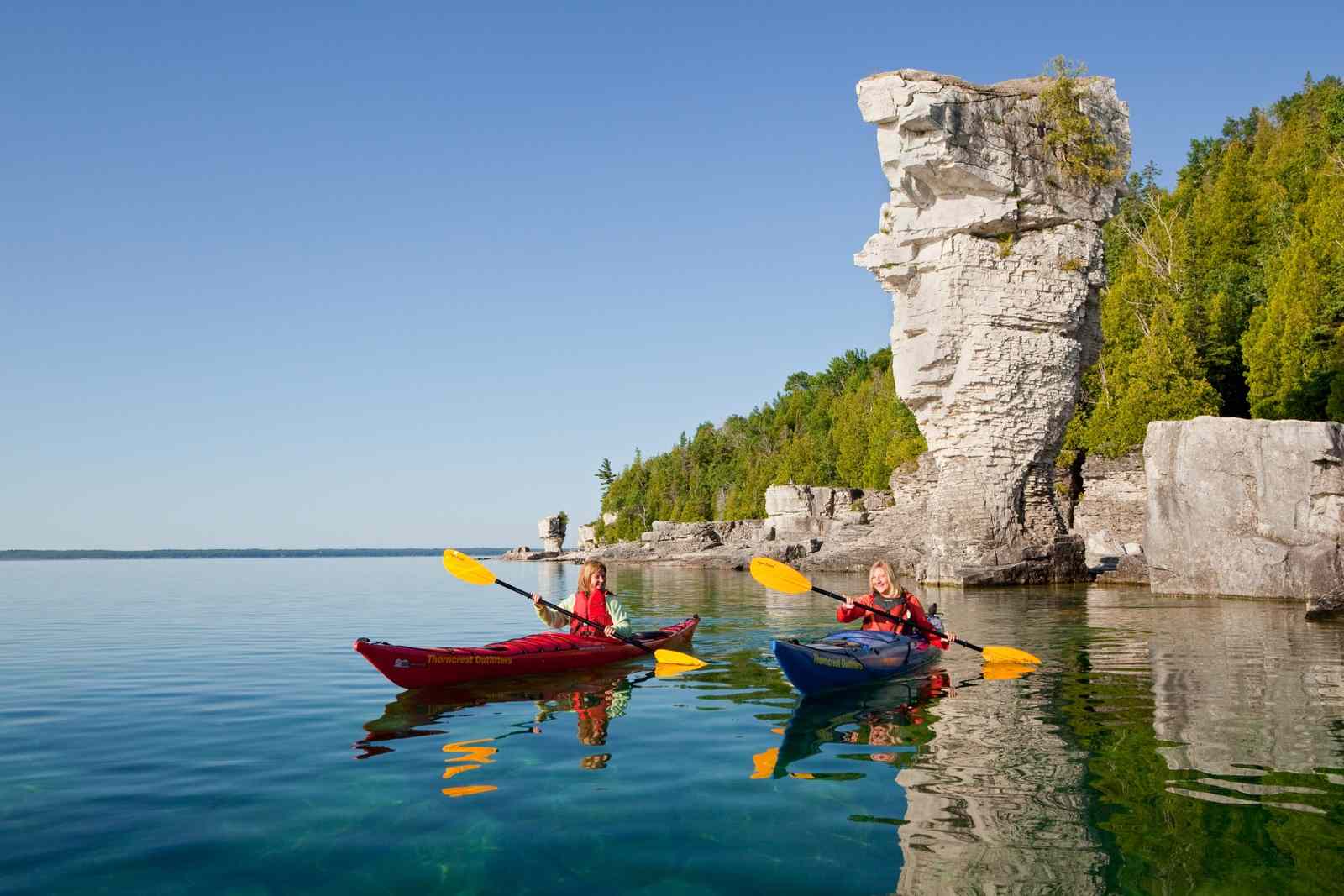 A brief history of Lake Huron

Lake Huron, like all of the Great Lakes, was gradually carved by the retreat of ancient glaciers. During the last glacial retreat, Huron’s shoreline was naturally sculpted into rolling ribbons of polished rock. Sedimentary and volcanic rocks eroded the surrounding area, forming the hills and small mountains that exist there today. These formations now make up the Canadian Shield around the northern side of Georgian Bay. Thousands of years later, the lake floor is being explored, unearthing long-lost shipwrecks and relics of 9,000-year-old animal-herding structures from ancient cultures. 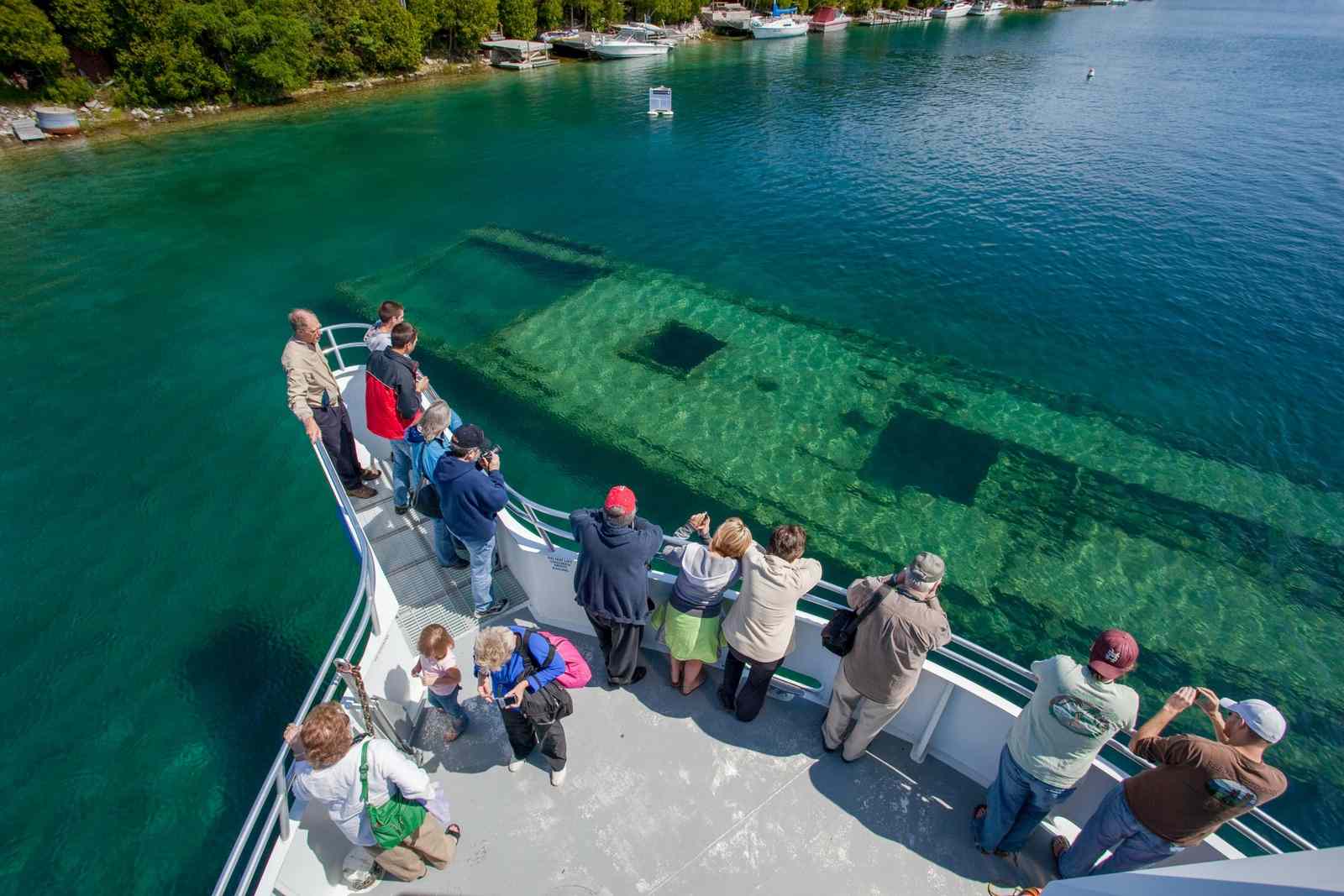 The near 1,000 shipwrecks that lie below Lake Huron’s surface are due to this lake’s extensive network of islands, shallows, and impressive storms. Twenty-two of these ships are located in Fathom Five National Marine Park. Lake Huron also played an important role in the War of 1812. Fort St. Joseph (on St. Joseph Island) was the rallying point for Canadian, First Nations, and British soldiers at the start of the war.

Lake Huron has an underwater petrified forest of 7,000 year-old trees! 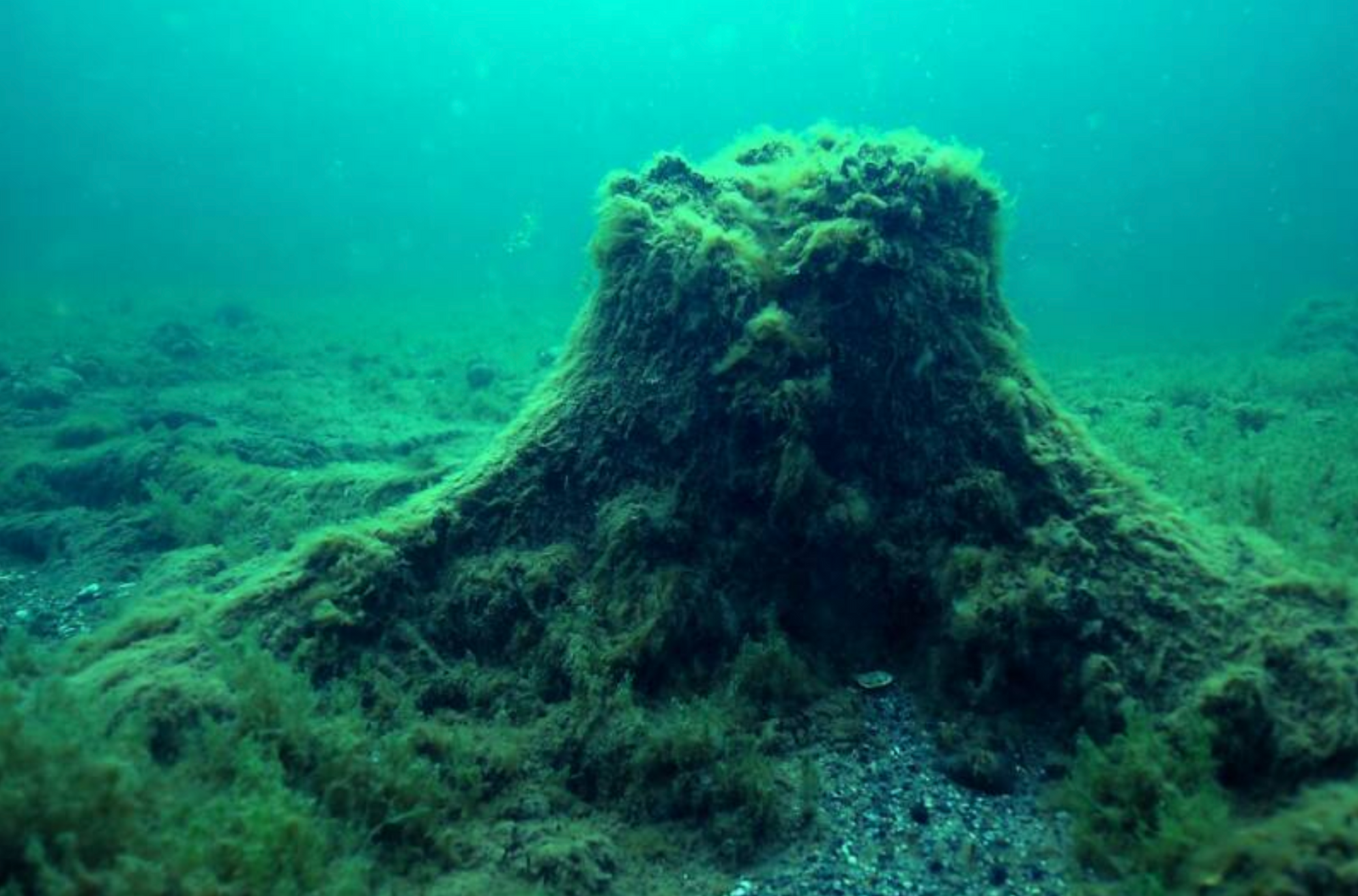 The bottom of Lake Huron is a portal into the region’s history — from shipwrecks and remnants of ancient cultures to deep basins and channels formed by past glacial events. These features lure visitors into the lake to explore the history that lies within the turquoise waters — both cultural and natural.

The many islands and caves that dot the turquoise waters provide recreational opportunities and important habitats for both people and wildlife. The Grotto in Bruce Peninsula National Park is a popular destination with its scenic, rocky cave surrounding crystal clear water — the epitome of Lake Huron. 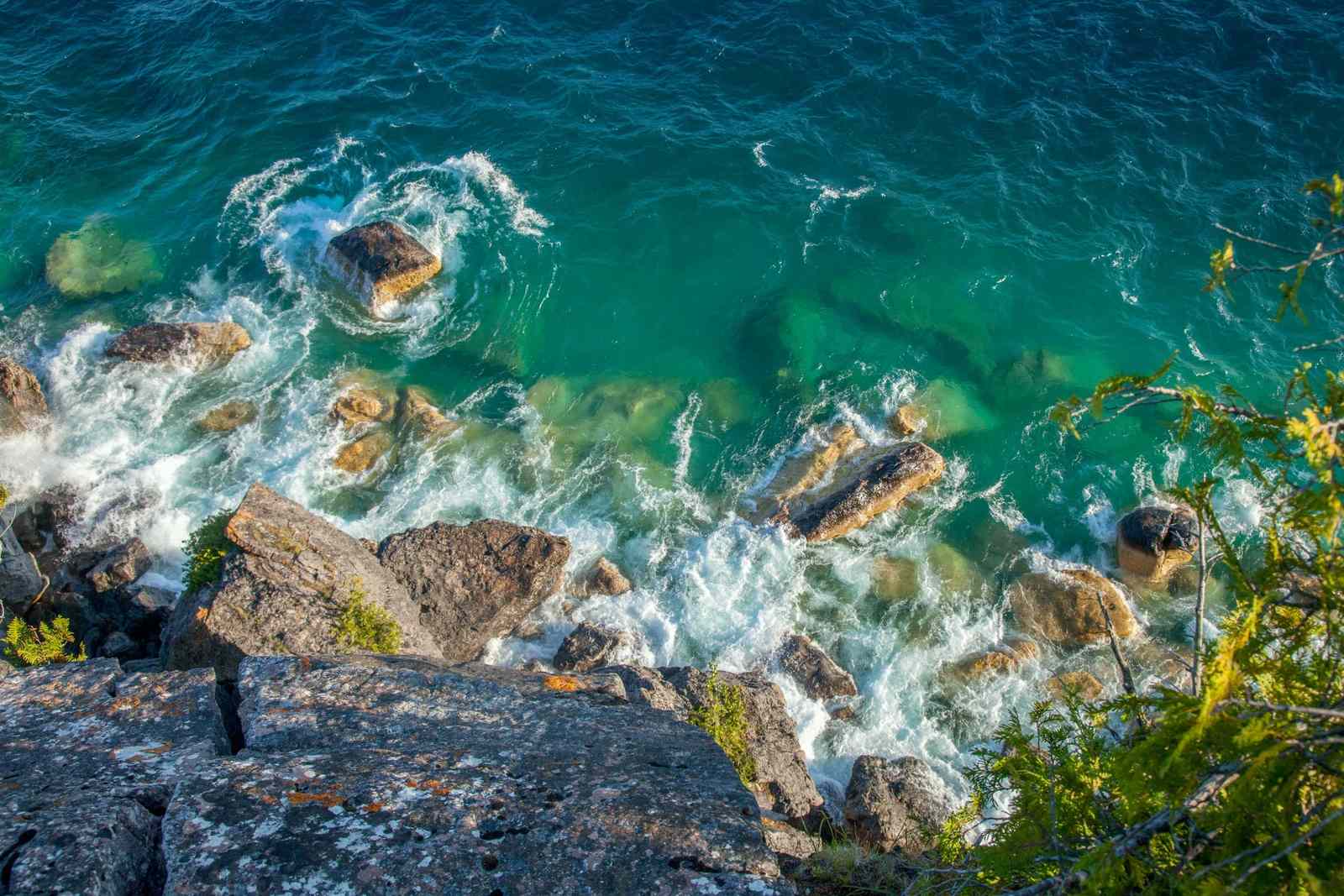 Lake Huron provides critical resources to both Canada and the U.S., from drinking water to lumber to food. But these economic activities have a direct impact on the health of this ecosystem.

Like all of the Great Lakes, Huron is susceptible to habitat destruction, pollution and industrial run-off, invasive species, and a changing climate. The rivers and streams that flow to and from Lake Huron are highly vulnerable to changes in the surrounding land use and have a direct impact on the health of the lake.

We must work on creating a balance between our social and economic needs and the health of the wildlife that depend on these regions. Our activities have a direct impact on the quality of the water and the health of this lake for generations to come. The first step in protecting this turquoise, historic, rocky, pristine, and coastal lake is to pay it a visit and experience firsthand all that Lake Huron has to offer.

Dorset Scenic Lookout Tower is a must-see in Southern Ontario. This popular...

With the white quartzite ridges of the La Cloche Mountains’, the pink granite...