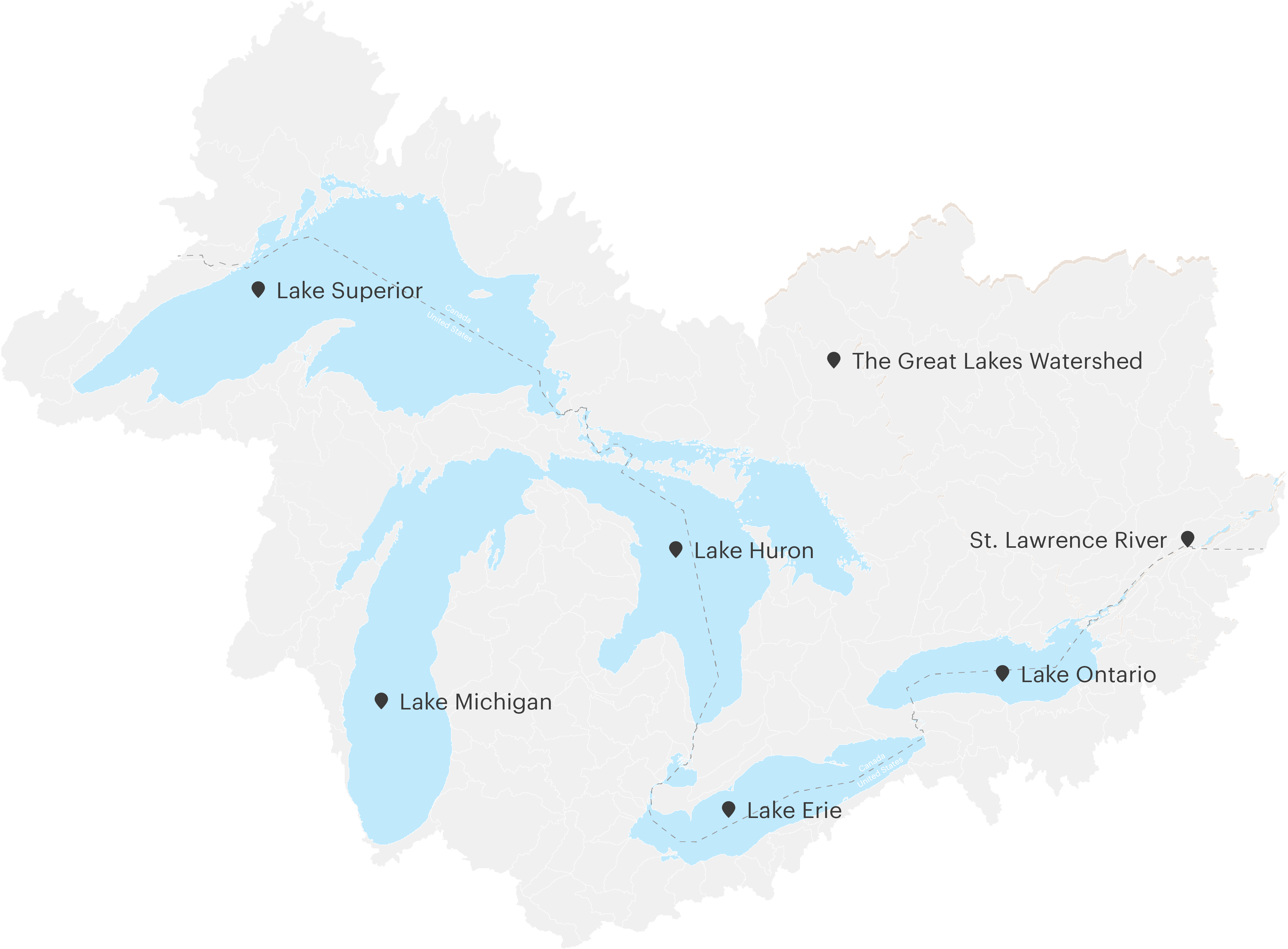 The unparalleled, natural beauty of the Great Lakes inspires a sense of wonder and possibility. They are one of the world’s most significant water resources and the most extensive freshwater system on Earth. The Great Lakes — Superior, Michigan, Huron, Erie, and Ontario — represent thousands of years of history and continue to play an important role in the physical and cultural heritage of North America. They are critical to the social and economic vitality of the entire North American continent.

The intrinsic, environmental, social, and economic value of this magnificent global asset calls for an equal level of appreciation, responsibility, and protection. 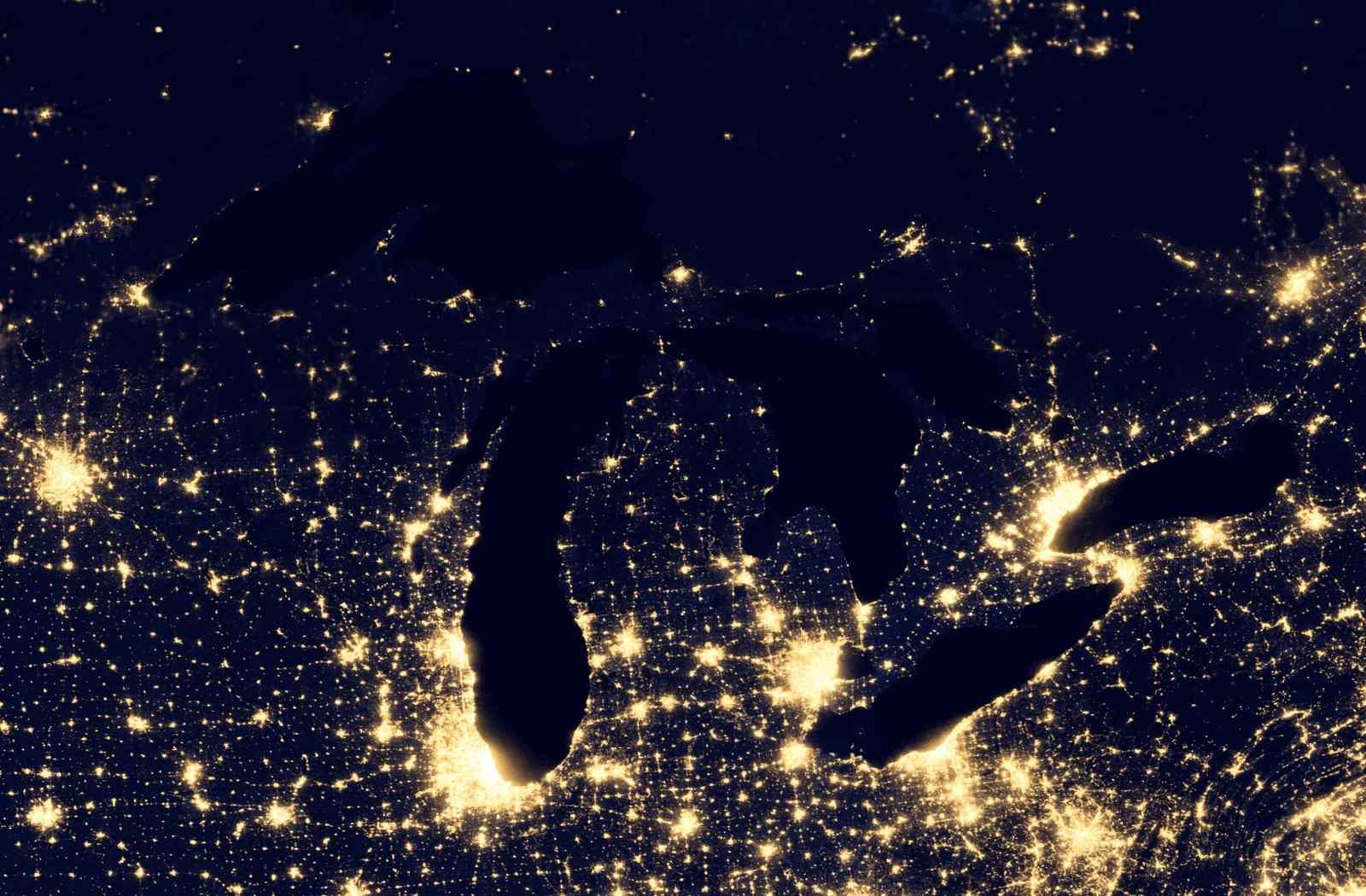 Why are the Great Lakes important?

The Great Lakes are a chain of five large, interconnected bodies of water. These five lakes, together with the St. Lawrence River, contain 20% of the world’s fresh water and form the largest surface freshwater system in the world.

The importance of the Great Lakes watershed

The Great Lakes watershed, or Great Lakes basin, is defined by watersheds that drain into the Great Lakes. A watershed is an area of land where all of the water that falls on it drains into the same outlet — for example, a stream, river, or lake. For this reason, a watershed is also called a drainage basin or catchment. A watershed is made up of surface water (from lakes, streams, wetlands, and reservoirs) and all underlying groundwater. As water continues to move downward, streams and rivers may join with larger lakes and, eventually, the ocean.

Precious resource: The scarcity of freshwater

Water is essential for all life. It makes up 60% of our body weight. Humans can only survive a few days without water, but less than 1% of all Earth’s water is usable freshwater! One out of every three Canadians and one out of every seven Americans rely on the Great Lakes for water.

The Earth appears water-rich, but most of the Earth’s water (97%) is salt water and another 2% is locked away in glaciers and the polar ice caps. That means just 1% of all the water in the world is available freshwater, the building block for most life.

Without access to lakes, rivers, and groundwater, people and societies cannot survive. Freshwater is so important to human survival that 90% of the world’s population lives less than 10 km from a freshwater supply.

The Great Lakes support millions of jobs and contribute billions of dollars to the Canadian and U.S. economies annually.

If we thought about the Canadian provinces and American states surrounding the Great Lakes as its own country, it would rank as the third largest economy in the world with a GDP of USD $6 trillion (CAD $7.6 trillion).

The Great Lakes region is unique: It has one of the richest and most ecologically diverse ecosystems on the planet. It encompasses forest, wetland, and grassland habitats, and is home to over 4,000 species of plants, fish, and wildlife. This ecosystem boasts some of the most impressive and diverse habitats in the world — from rocky peninsulas and towering cliffs, to vast marshlands and immense sand dunes. 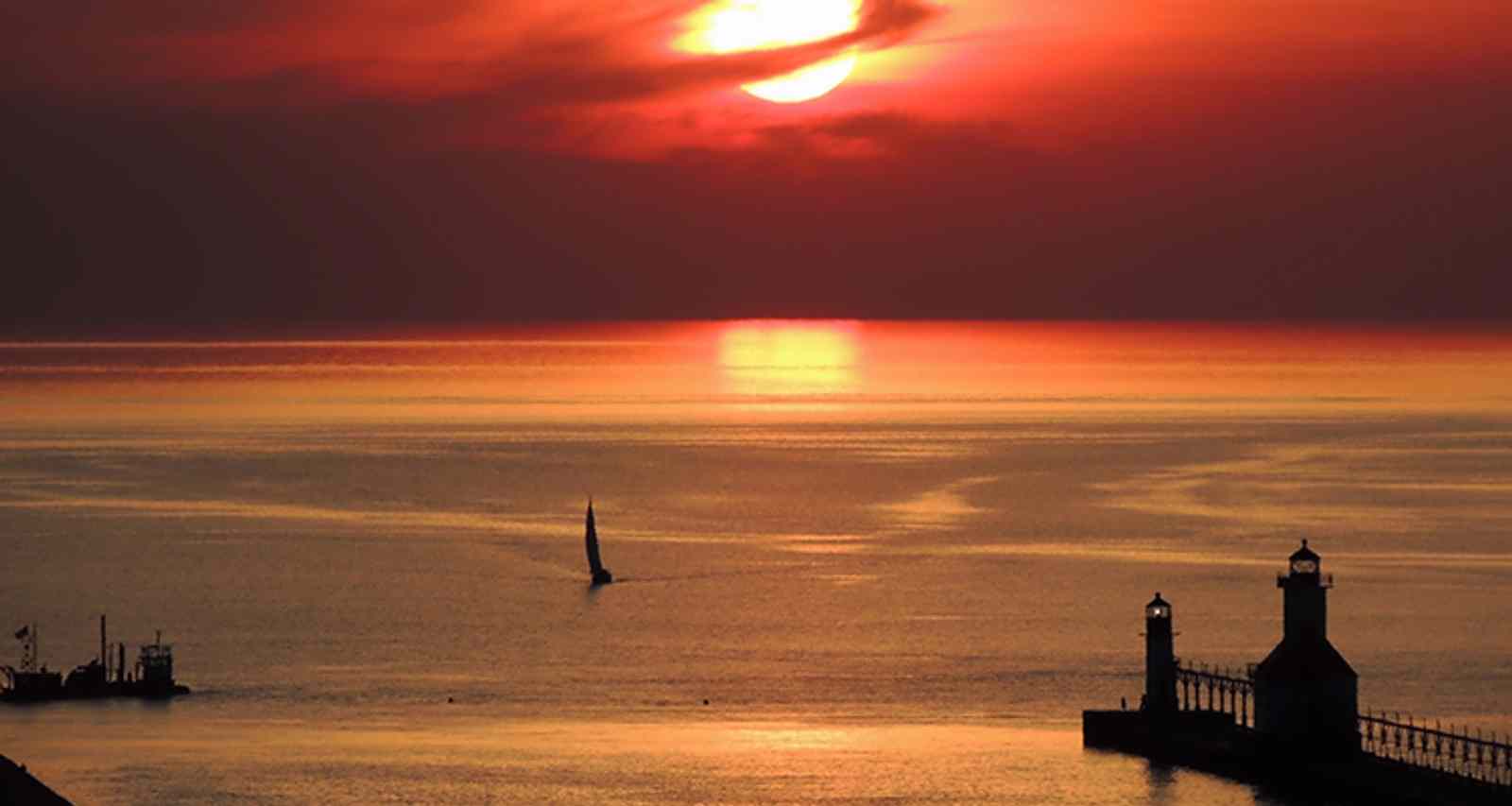 A brief history of the Great Lakes

The Great Lakes were formed nearly 20,000 years ago. At the end of the last Ice Age, Canada, as well as the northern part of the United States, was completely covered in ice. As Earth’s climate warmed, the lakes were sculpted by a glacial continental ice sheet — a large, slow-moving mass of ice and compact snow. Its movement was so powerful that it scraped the surface of the Earth and created the lake basins.

Gradually, the glacier continued its retreat. The land it had previously weighed down began to rebound and warp upward. Large chunks of left-behind ice pushed down the soil with their immense weight and melted to create lakes. These forces, combined together, gave the Great Lakes the shape we know them by today.

During this very long process, at least as far back as 15,000 BCE, humans had already migrated to areas within the Great Lakes Basin. Contrary to popular belief, the history of human habitation goes back to at least the close of the last Ice Age.

The Great Lakes watershed has a volume of 6.5 quadrillion gallons of water. That is enough to blanket North America with 1.5 metres of water! 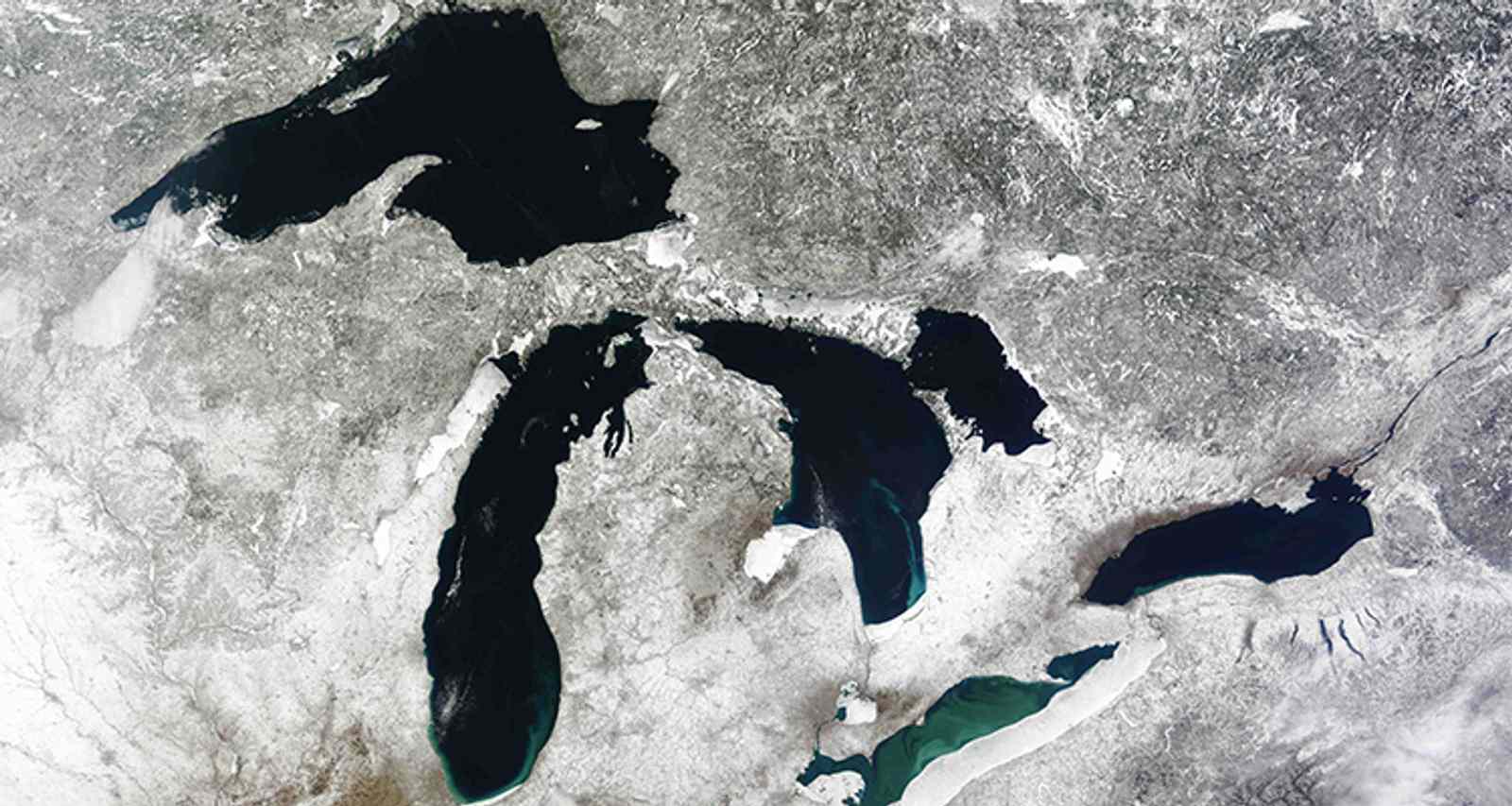 Wildlife, beaches, cityscapes, national parks, islands, recreation, and adventure — the Great Lakes have it all. You can use Great Lakes Guide to find places to visit and take your own stunning images! 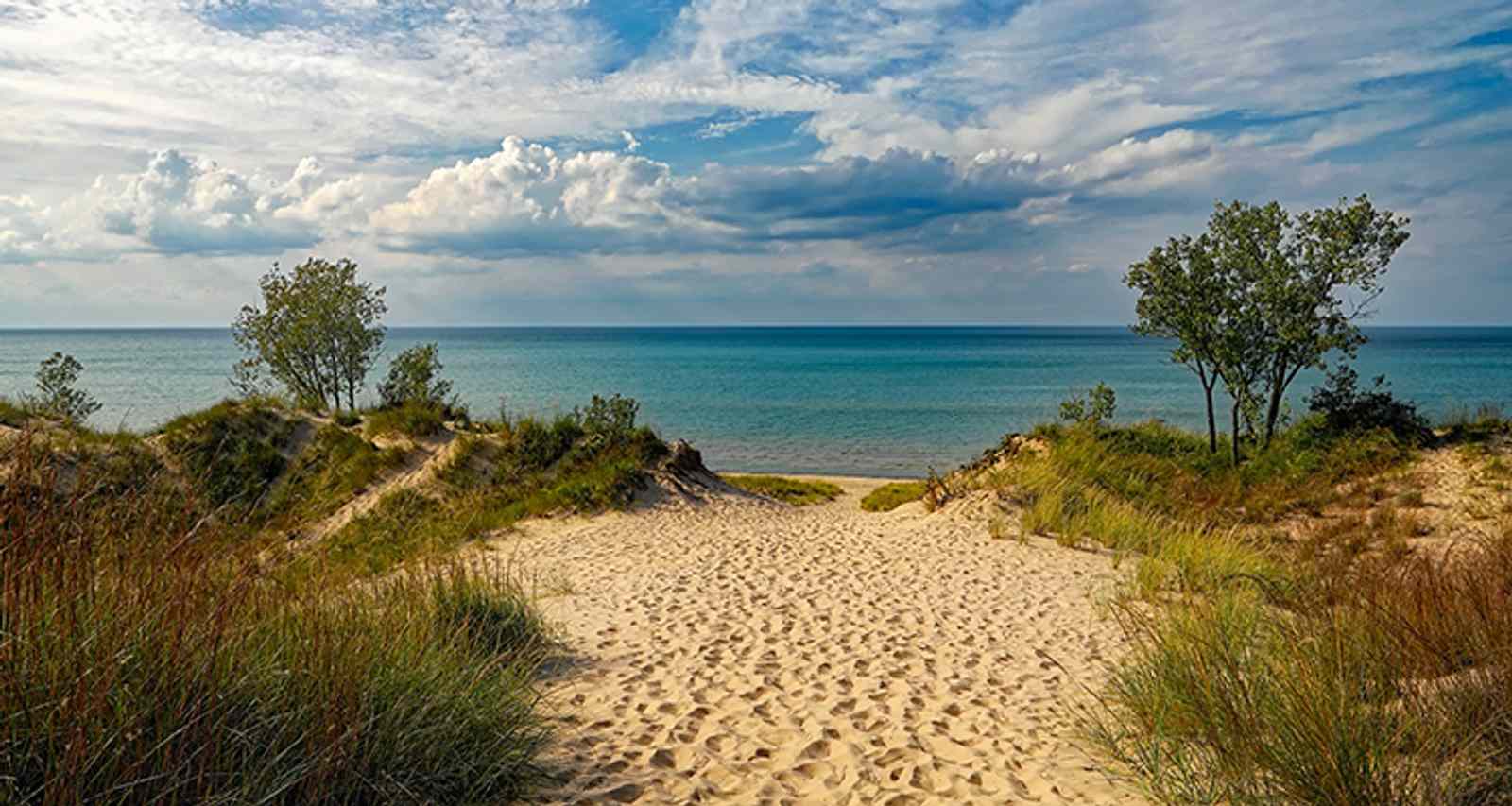 In spite of their large size, the Great Lakes are extremely vulnerable.

Each year, only about 1% of the water in the lakes leaves the basin via the St. Lawrence River. Because water exits the system so slowly, the Great Lakes are essentially a closed system. Until European settlement, the Great Lakes ecosystem was also considered "ecologically naïve," meaning that historically, its vulnerable animal and plant species were isolated. Now, they are left uniquely exposed to stressors such as pollution, invasive species, and habitat degradation.

Past and present neglect of the system — unsustainable use, discharging of harmful chemicals, and climate change — have led to serious consequences for native species and the health of the Great Lakes. The four biggest, ongoing issues facing the Great Lakes are habitat destruction, sewage pollution, river damming and diversion, and land-use runoff.

The Great Lakes have provided us with invaluable resources — drinking water, food, energy, transportation, recreation, and prosperity. It is paramount that we protect this remarkable and vitally important system that we depend on so critically. The first step is to understand and strengthen our connection to the water. So start your journey, as so many others have, by experiencing firsthand the natural, breathtaking beauty of the Great Lakes.

Wards Island is a little piece of natural paradise in the City of Toronto. It...

White Lake is nearly 20km long, making it one of the largest lakes on the Lake...