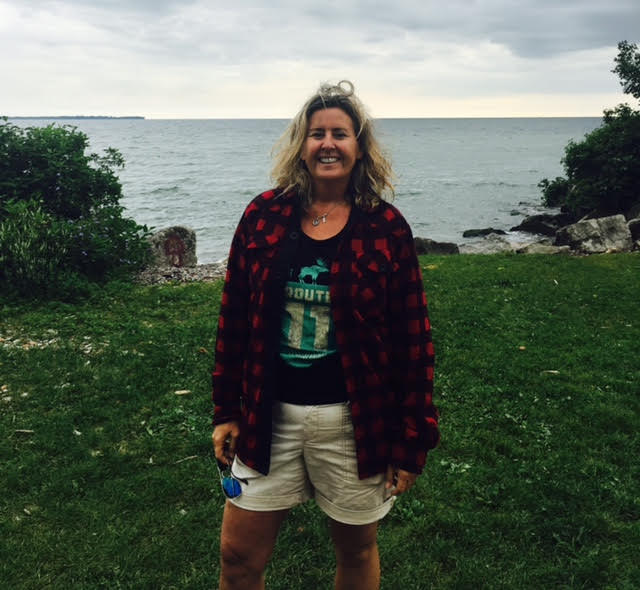 Previous Next
My Watermark is Lake Huron, Ontario.

I grew up in Lake Ontario, which back in the 70’s, I never really took too much interest in due to the different state of the lake at the time.

When I was 23 years old, I got invited to a cottage on Lake Huron, Inverhuron. The minute my feet hit that sand, and I looked out on the waters that were turquoise blue, and clear as could be, I was like — this is now my new favourite Lake of all the Great Lakes in Ontario.

I cottage up there every summer. I was actually just up there this past weekend. It is a beautiful lake, and I feel that when I’m swimming in it, it’s on a much cleaner scale. Sometime when you look out, it look’s like an ocean. It’s constantly changing from still to rough. It’s where we pack in our summers, just hang out on the beach, and enjoy every minute of Lake Huron.

I go there with my friends and family, so it’s a real community. They say the Bruce Peninsula is like the sunset area of all of Ontario. To me, for living in Ontario, Lake Huron is as good as it gets.

While we’re there we swim, we sail, go out on the hobie cats and take out kayaks. We don’t really fish, but people do. You have to go further out to get the white fish. We don’t see to many fish, and that’s always a concern. I mean there is the Bruce Nuclear close by…

The water is always a much cooler temperature I find, but as I said, you can get out to parts in the reef, where the clarity is amazing. How clear the water can be, even 20 ft down is pretty spectacular. We live on the water, and live on the beach all summer.

I live in Toronto so I come by Lake Ontario often, and I notice that it’s getting cleaner, but I’m still a bit of a skeptic. Like “If I have an open cut..should I be going in?”

I did a study many years ago on toxic waste, and growing up in Niagara, I knew the Niagara River was the worst pollution source of this lake. Back then, there were 300 known toxins, when I was writing this paper. So that’s kind of stuck in my head. It was all coming from the Niagara River, and it was from industries that were basically putting their waste and sewage in the Niagara River, that was then flowing right into the mouth of Lake Ontario. That’s why we didn’t hang out in Lake Ontario, because we knew it was toxic back then, or at least we thought.

I mean we are up beside a nuclear plant in Lake Huron, and no ones glowing yet, but it still has a cleaner look. It just looks like it is a cleaner lake. I guess when you learn more about the projects, such as clean-ups going on with the lake and people say it’s swimmable, that’s when you got to go okay, ‘they trust it, they’ve tested it.’ The water is getting better every year. You kind of go by what people tell you. Sometimes when I go up to Ward’s Island and I’m swimming out on the other side, you feel like you’re far enough away that you’re safe. However, I’ve been up to other part’s of Lake Ontario, in the sandbanks and it’s not a problem. I guess it’s just more of the Bays of Toronto, where I don’t look to go on the beach to go swimming.. which is sad.