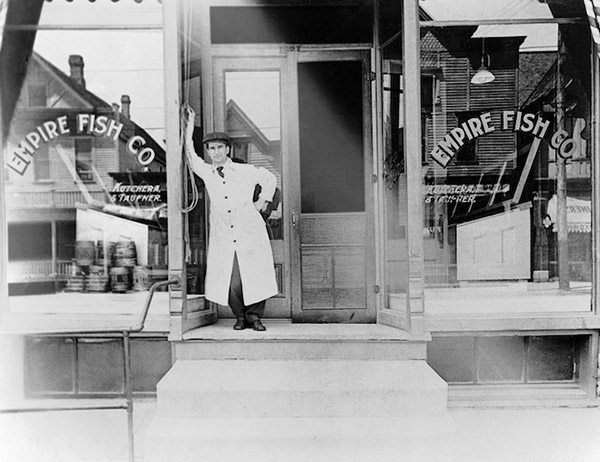 Previous Next
My Watermark is Lake Michigan, USA.

My brother and I compiled the photos and history of our family's fish company started in 1913 (Empire Fish). We did this to honor our father and his photographs but also to honor the many family-owned fish companies and fishermen. A few of them are still around like Ewig's and Empire Fish, but many others have completely disappeared. (Empire Fish is now owned by Neesvig's in Madison, WI.)

In April of 2016, photographer and curator Naomi Shersty attended the funeral of Tom Kutchera, former owner of Empire Fish Company and amateur photographer. She discovered two albums of portraits by Tom, taken between the 1960s and ‘80s, that captured Empire Fish’s workers who supplied fish to Milwaukee’s many fish fries and restaurants. That discovery led her to turn these portraits of a “work family” into a photo exhibit. And now, Tom’s sons, Joe and Andrew, have turned the exhibit, photos, and a manuscript that Tom left behind into a book – Faces of a Fish Empire – that tell the story behind their father’s portraits as well as the decline of commercial fishing on Lake Michigan.

This visual history of Empire Fish and commercial fishing exhibit tell a larger story beyond a single company. It captures the anthropological changes of Milwaukee: its culture, food, religion, and demographics. On a larger scale, it embodies the incredible changes in technology (freezers, transportation, and computers) and the transformation in our relationship to Lake Michigan and the Great Lakes.

See here for more information about the photo exhibit and book: http://joekutchera.com/books/faces-fish-empire/