What the duck? How to identify 25 ducks in the Great Lakes region | Great Lakes Guide
By Lindi Osborne

The humble duck doesn’t warble as well as a songbird or soar as gracefully as a hawk, but these underrated birds are fascinating in their own right. Not only do they come in an unbelievable array of shapes, sizes, and colours, they are also great for the health of our waters and wetlands.

Ducks fly, feed, and swim all over the place, which is great for natural ecosystems. As they eat, move, and poop, they introduce plant and animal species to new areas. They eat seeds or insect larvae in one place and, shall we say, deposit, them in another. Even their large webbed feet can pick up frog eggs which they transport to new environments.

All aboard the Duck Express, next stop: Biodiversity!

Ducks’ special role in ecosystems is becoming more important than ever. As climate change makes certain places too warm for some species, ducks can relocate them to more suitable climates so they can thrive.

Have I sold you on ducks? Good. Now it’s time to learn to identify all the wonderful ducks that call the Great Lakes region home.

Welcome to ducks for dummies. Let’s get quacking.


Ducks that look kind of Mallard-y


You’ll know them when you see them

First up, Ducks that look kind of Mallard-y 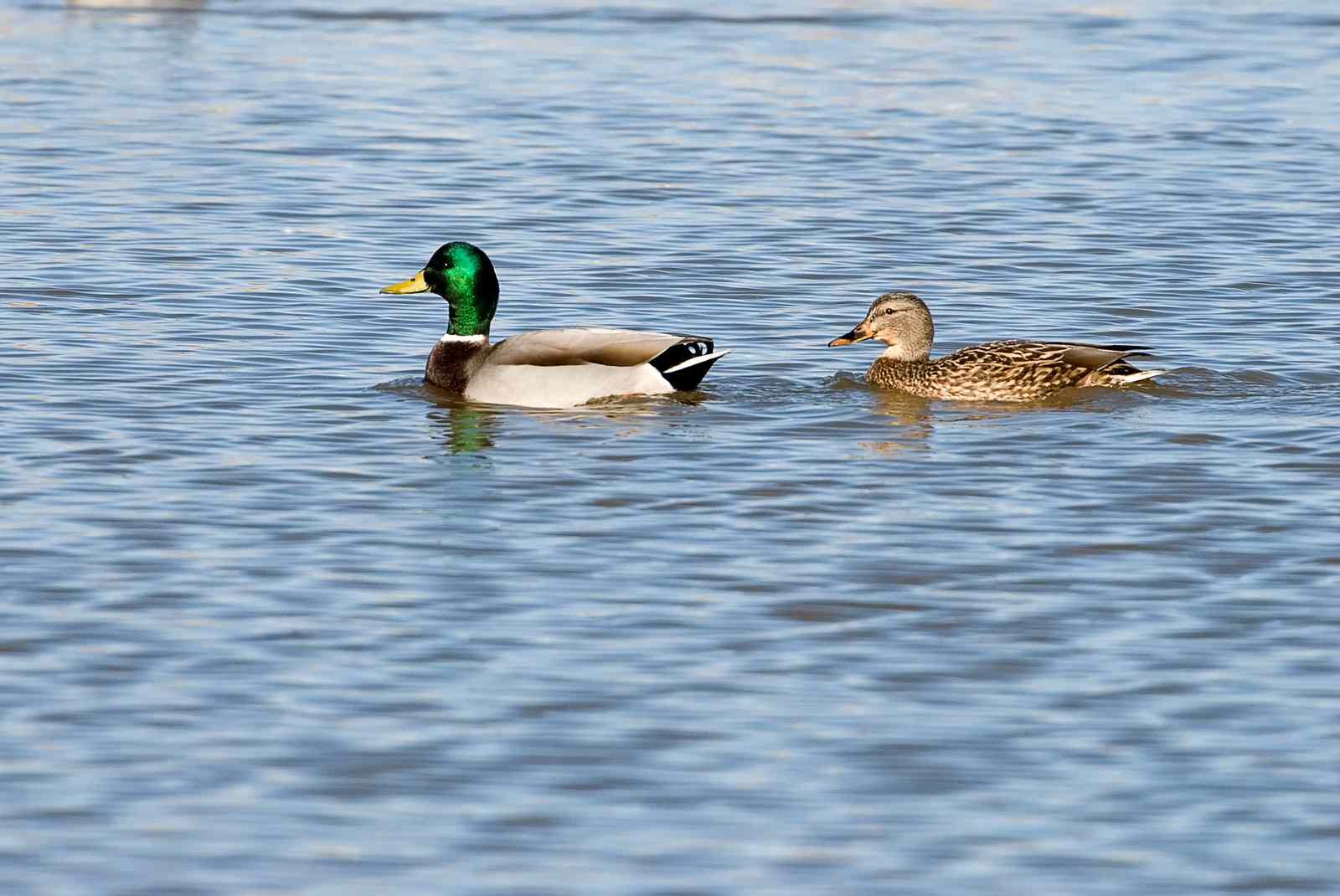 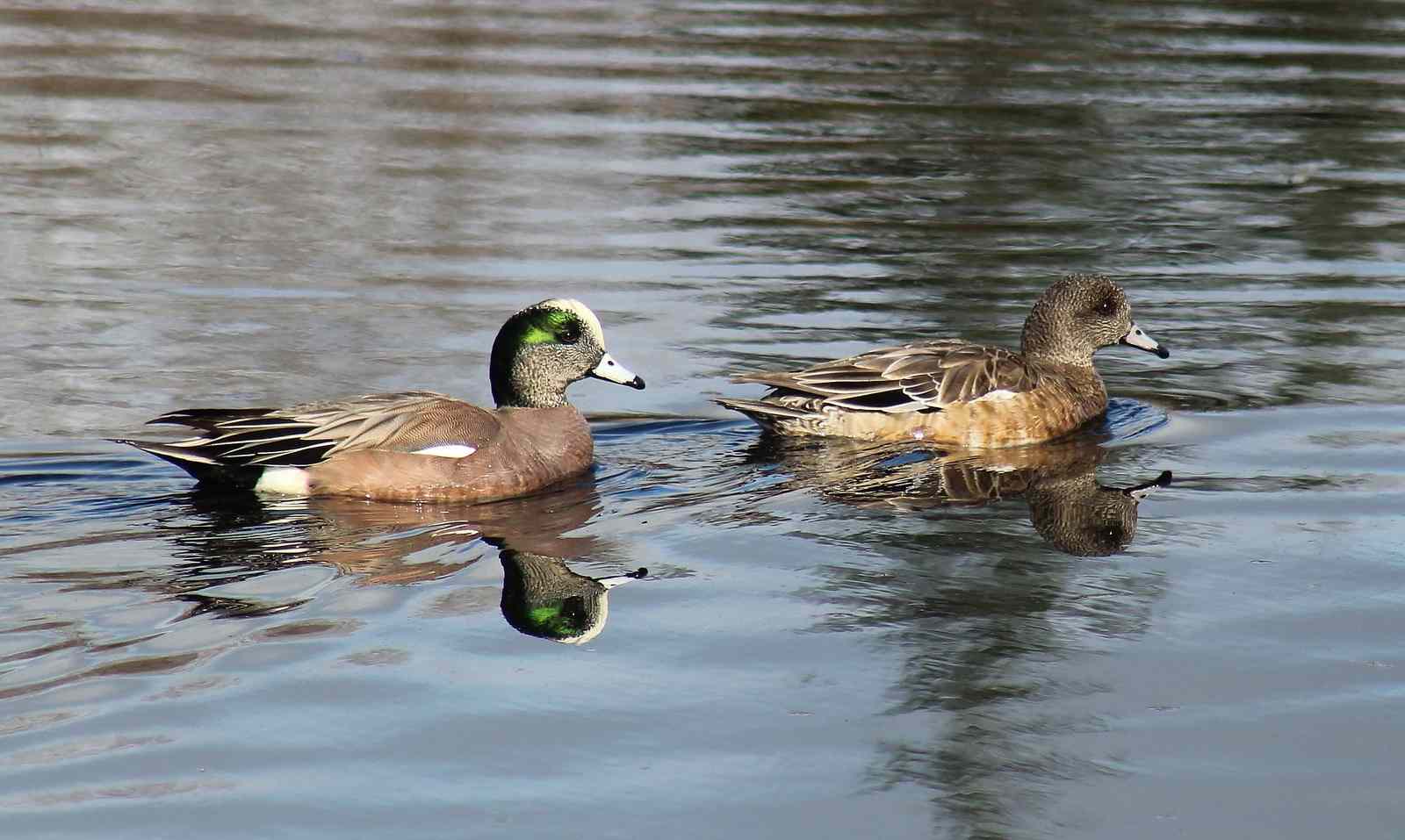 Hey, wait a second! This one has a green head too. Is it a Mallard? Of course not. You catch on fast. American Wigeons are one of two North American ducks bold enough to wear shimmery green eyeshadow. You can also identify these ducks by their light-coloured heads and bellies. 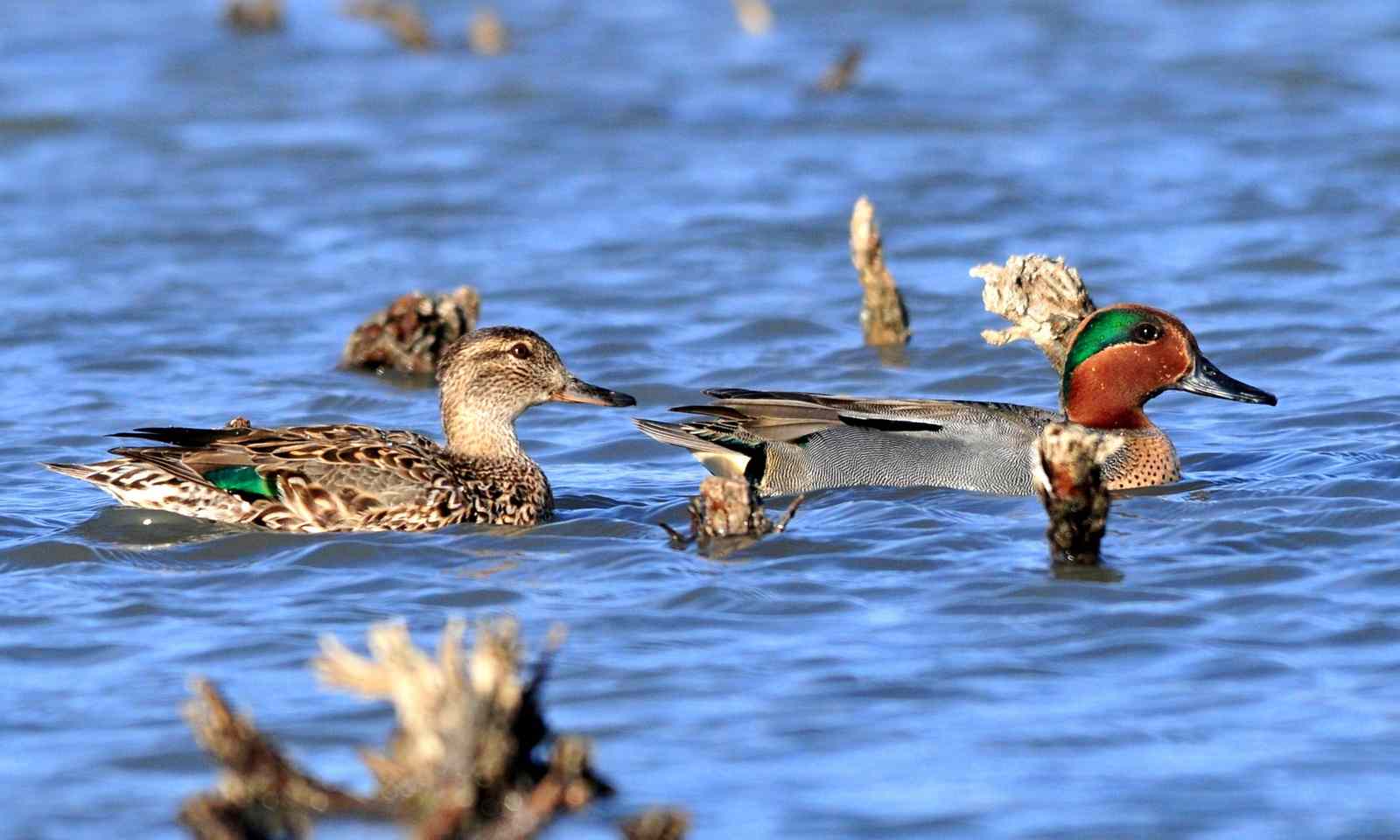 The colour teal is named after the duck. 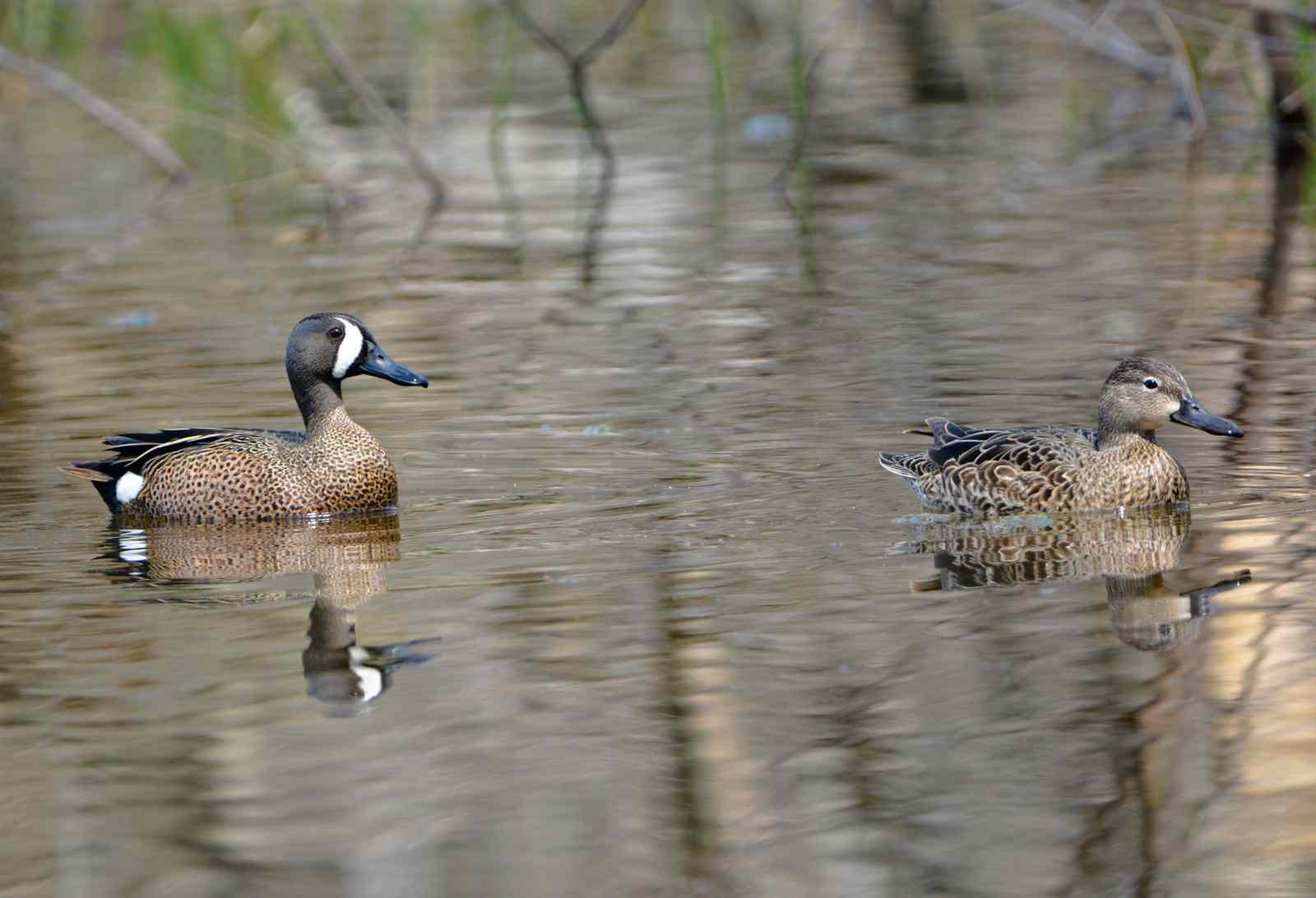 Yes, these ducks do in fact have a blue forewing. However, the colour is often only visible in flight. Perhaps a better way to identify these blue-winged beauties is by the Canada Goose-like white crescent marking on their face and what I would call an almost cheetah print body. 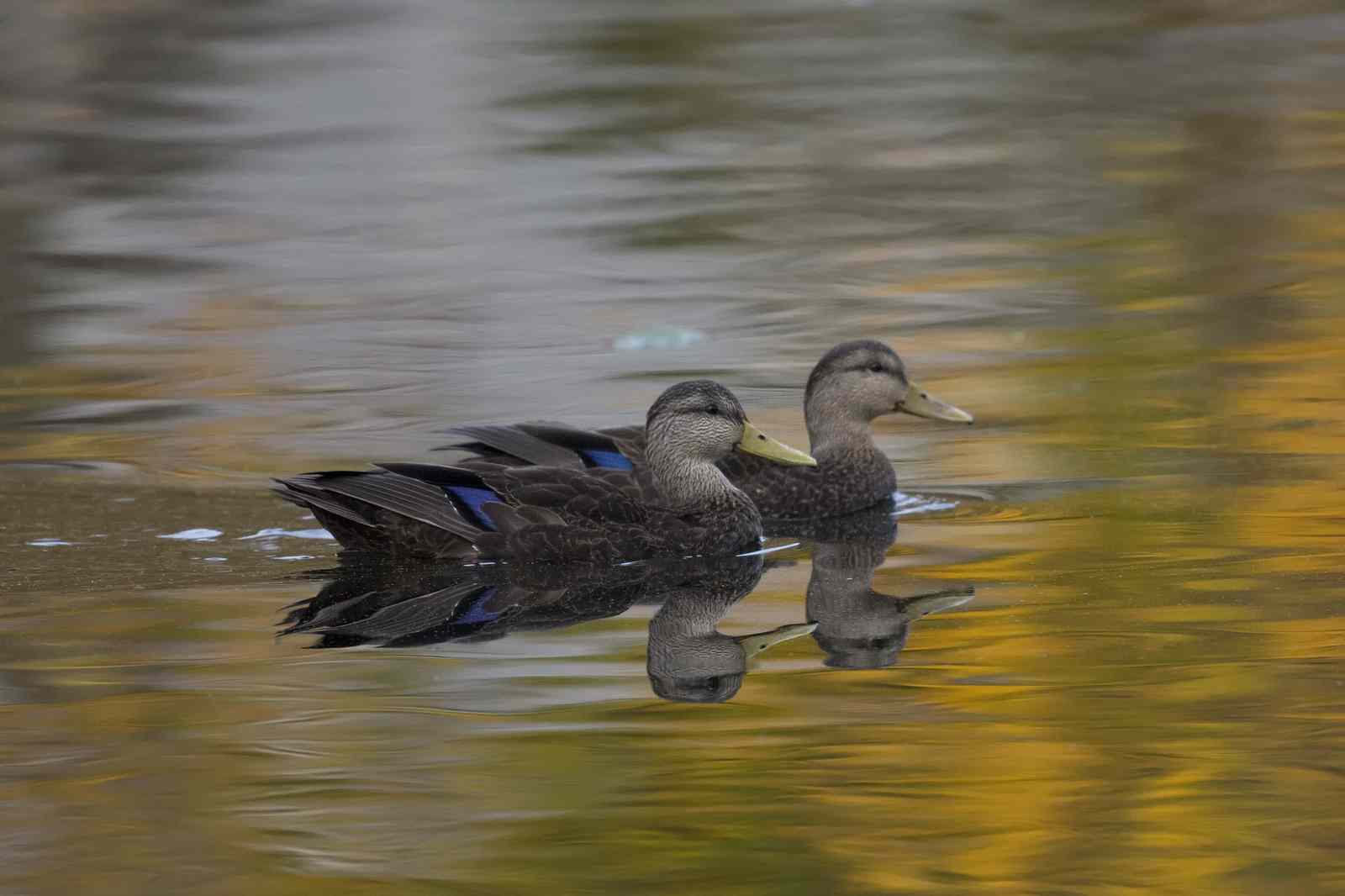 Although these ducks are nearly identical to Mallards in profile and similar to female Mallards in colour, they are notably darker, with white underwings and blue secondary wing feathers. 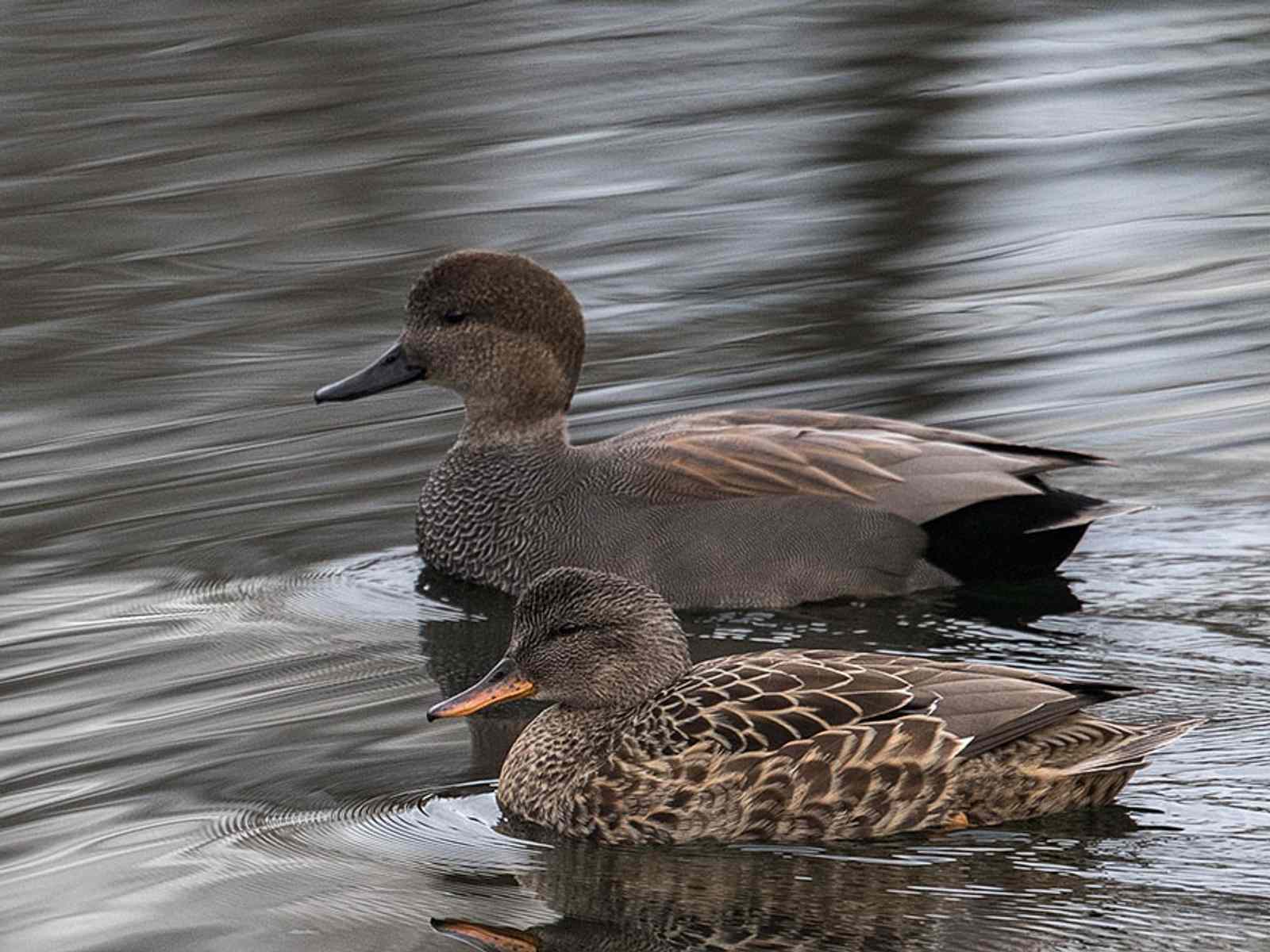 Moving on to Ducks with Bizarre Bills 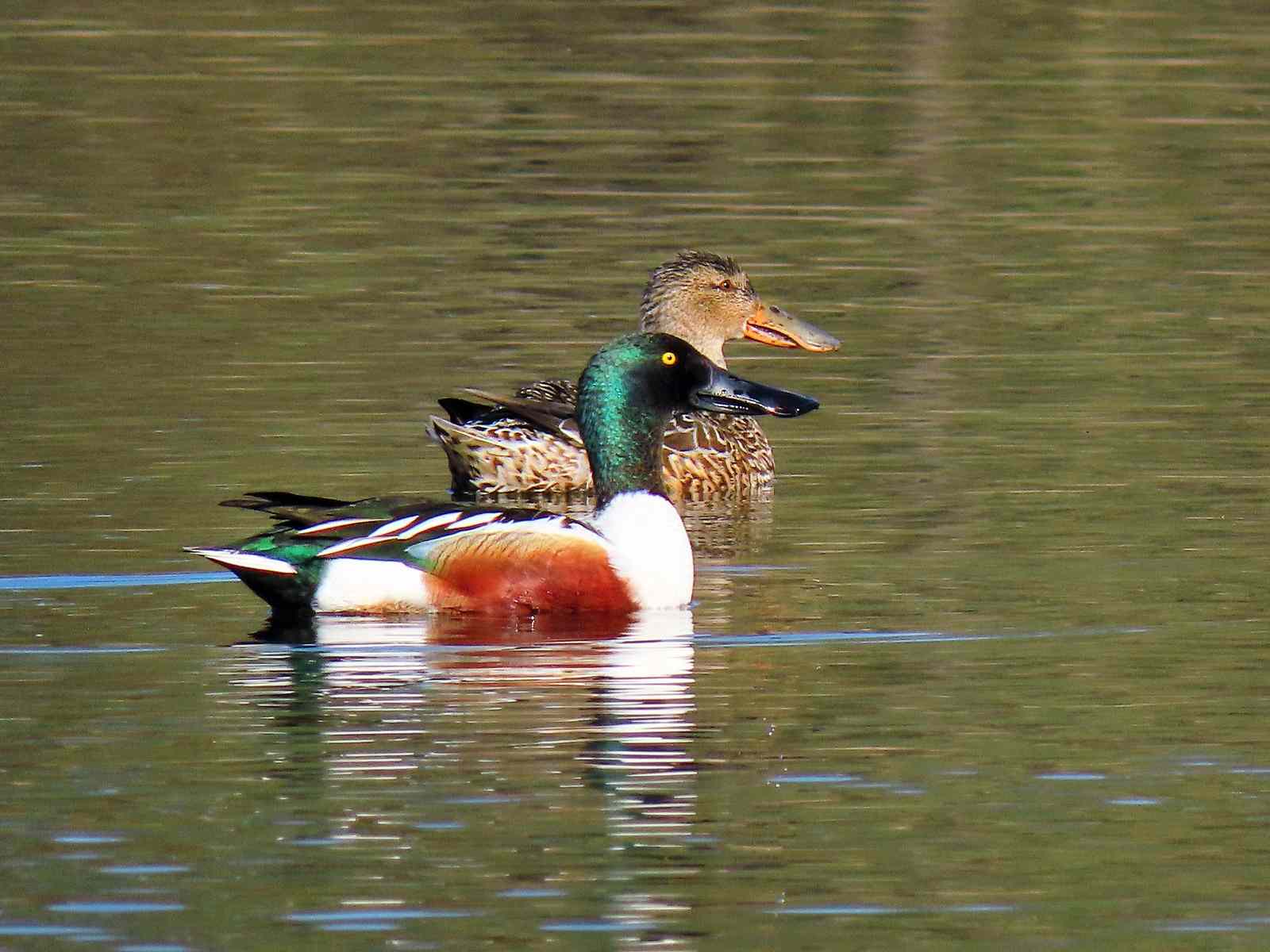 What a schnoz! Northern Shovelers are best identified by their huge spoon-shaped bills, equipped with comblike structures that filter out food like seeds and crustaceans as they skim their mouths through the water. They also have fully green heads and reddish-brown sides. 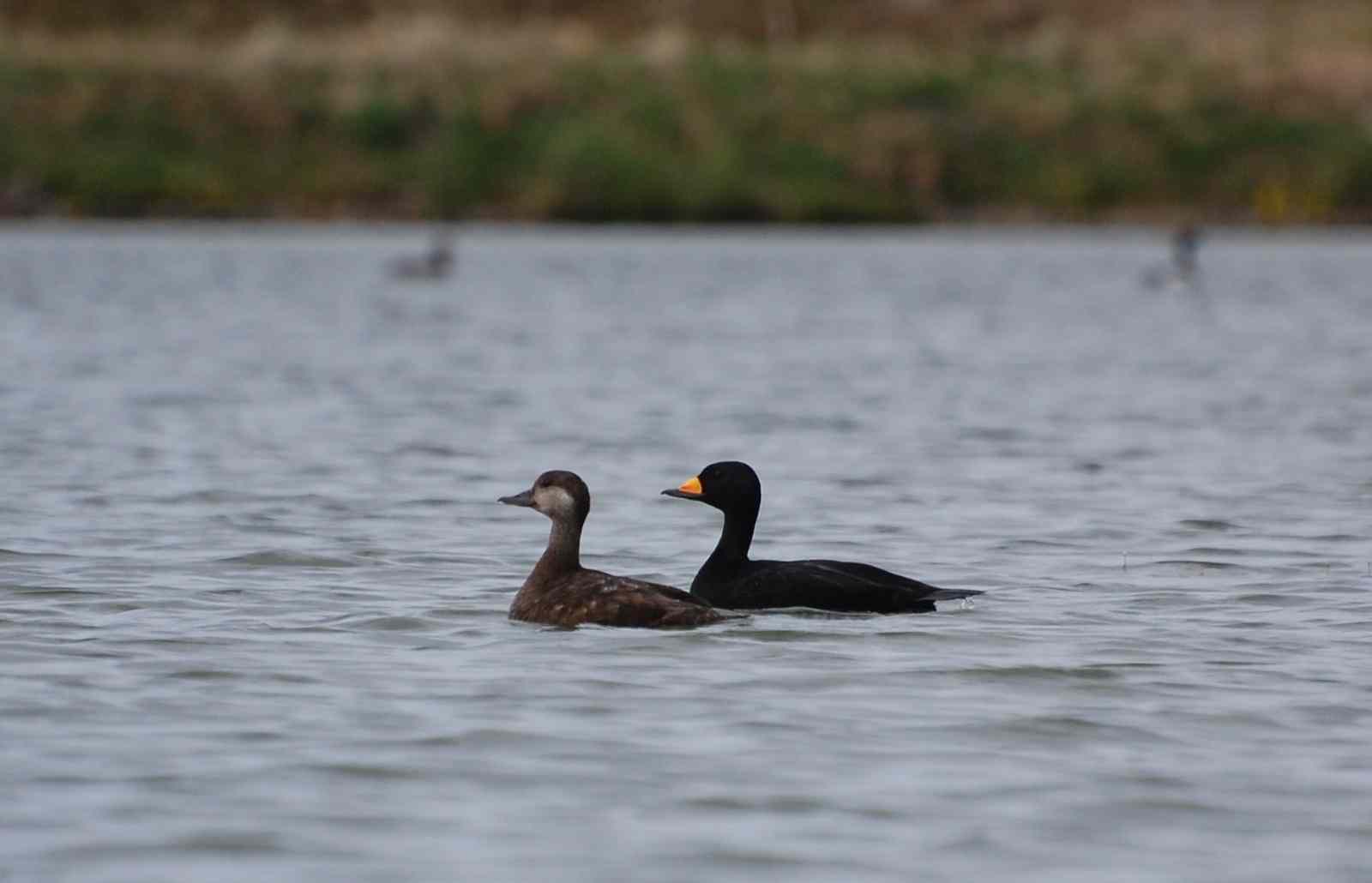 These black beauties will stop wearing black when they make a darker colour. They have fully black bodies but can be identified by their small orangey-yellow bills. 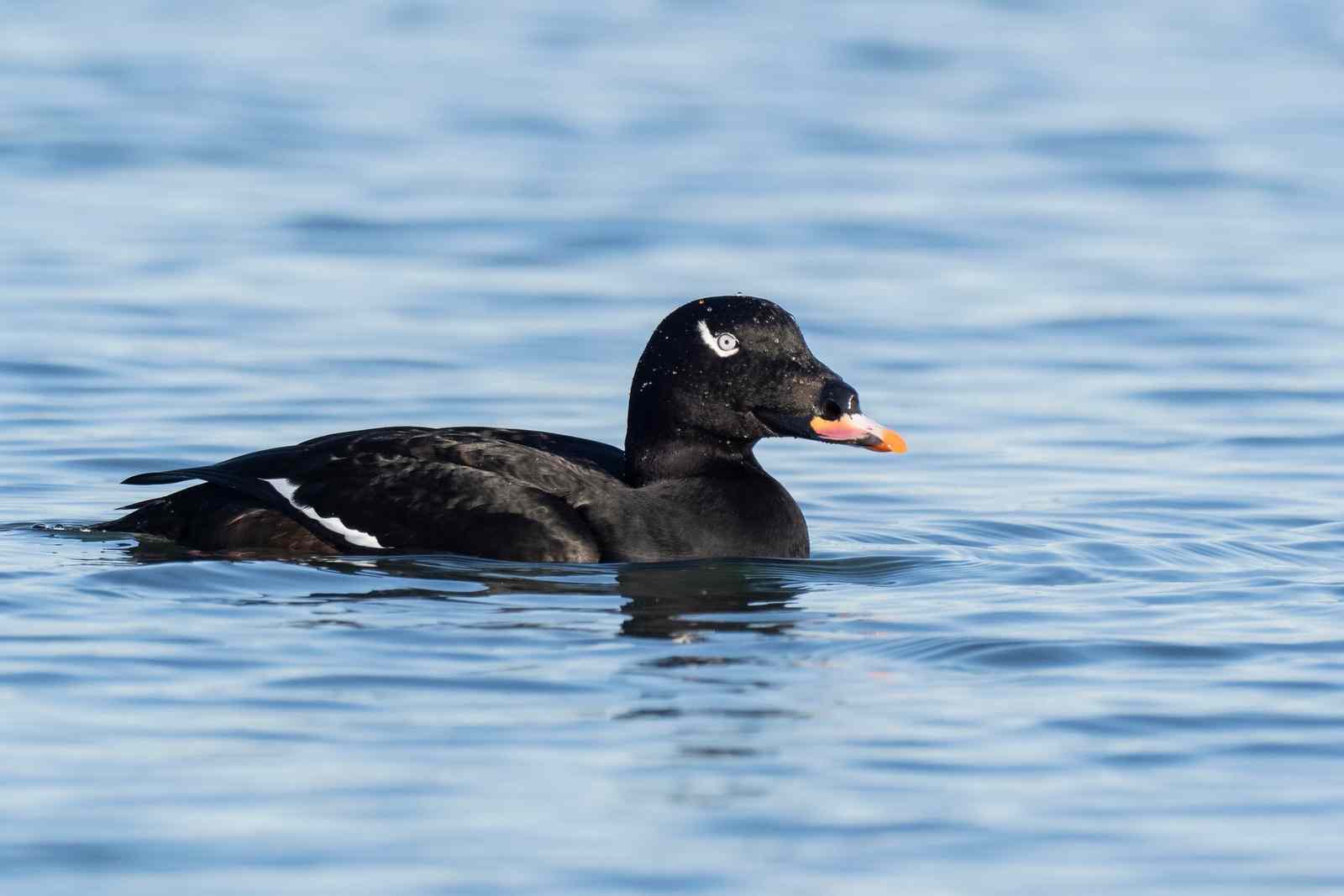 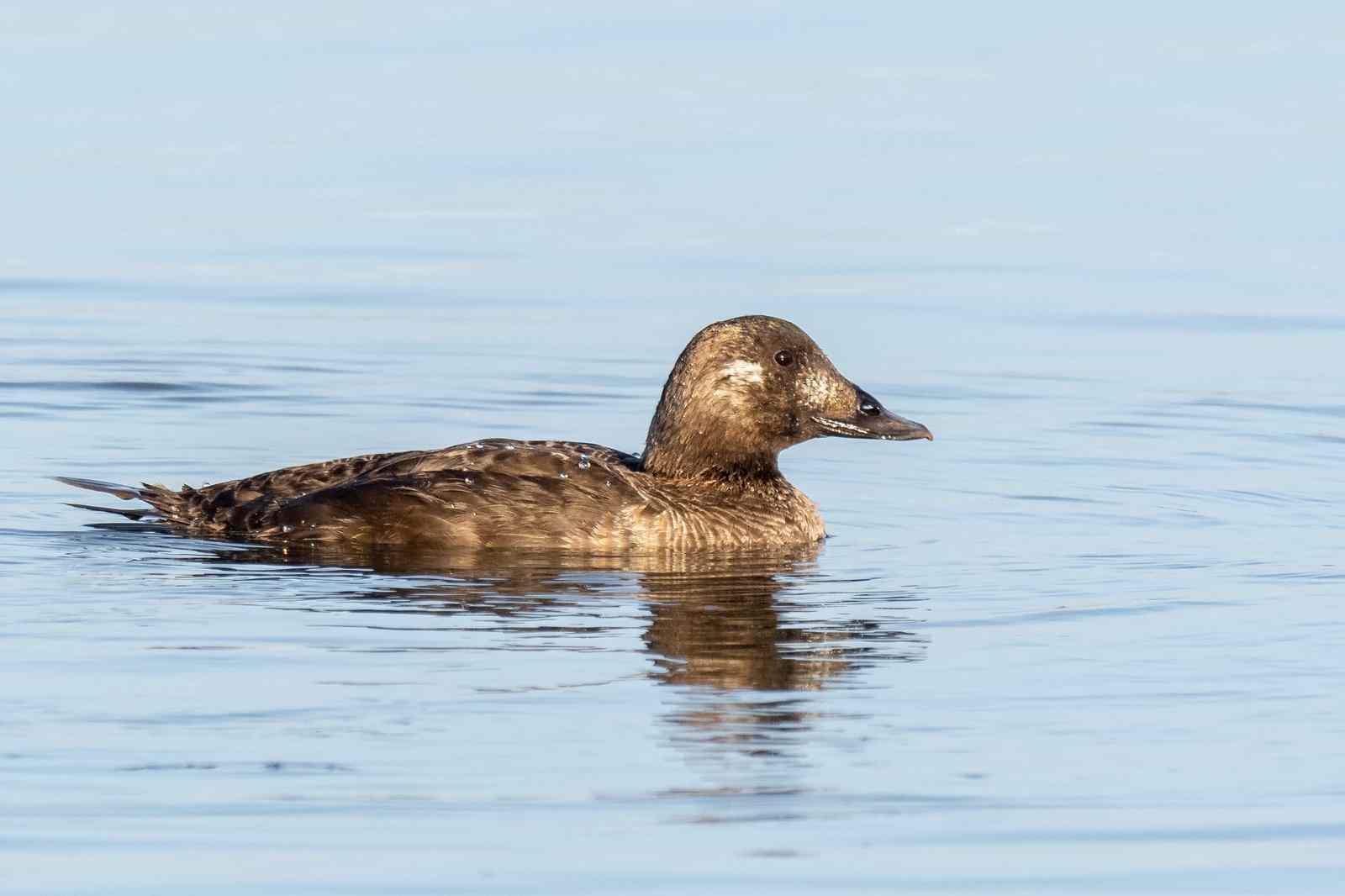 A (slightly) less inky duck, aside from their nearly all black bodies and heads, you can identify White-winged Scoters by their white eyes, white wing patches, and big bright reddish-orange bills. 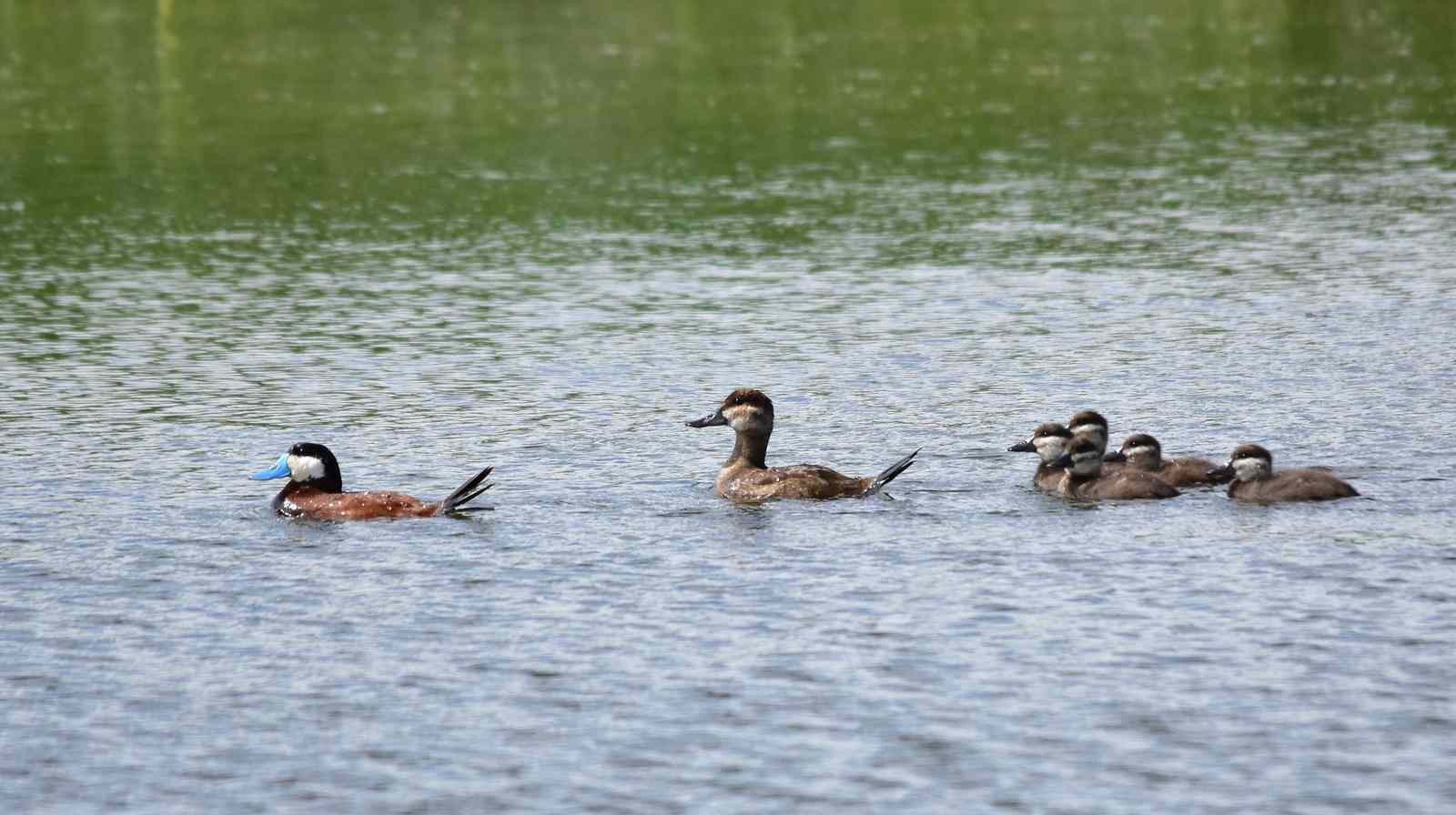 Breeding males are easily identified by their bright blue bills, black-capped heads, white faces, and long, stiff tails which they often (but not always) hold upright. And speaking of special tails...

Check out these Tall Tails 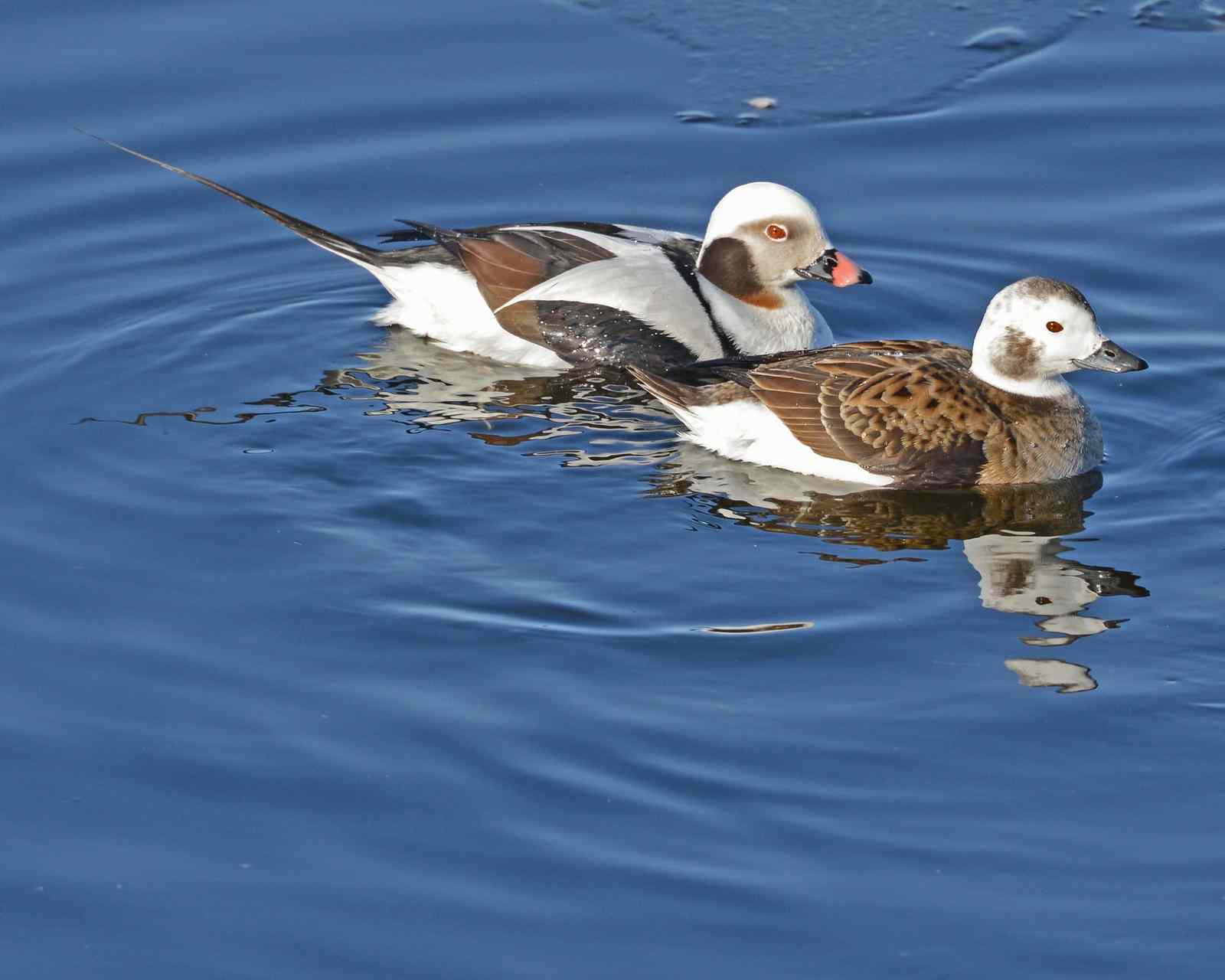 Have you ever seen something so elegant extending from a duck’s behind? These aptly named ducks have a long, pointed, distinctive tail. Aside from the tail, in the winter, you can recognize them by the large brown spot on their head, and in the summer, by their fully grey faces. 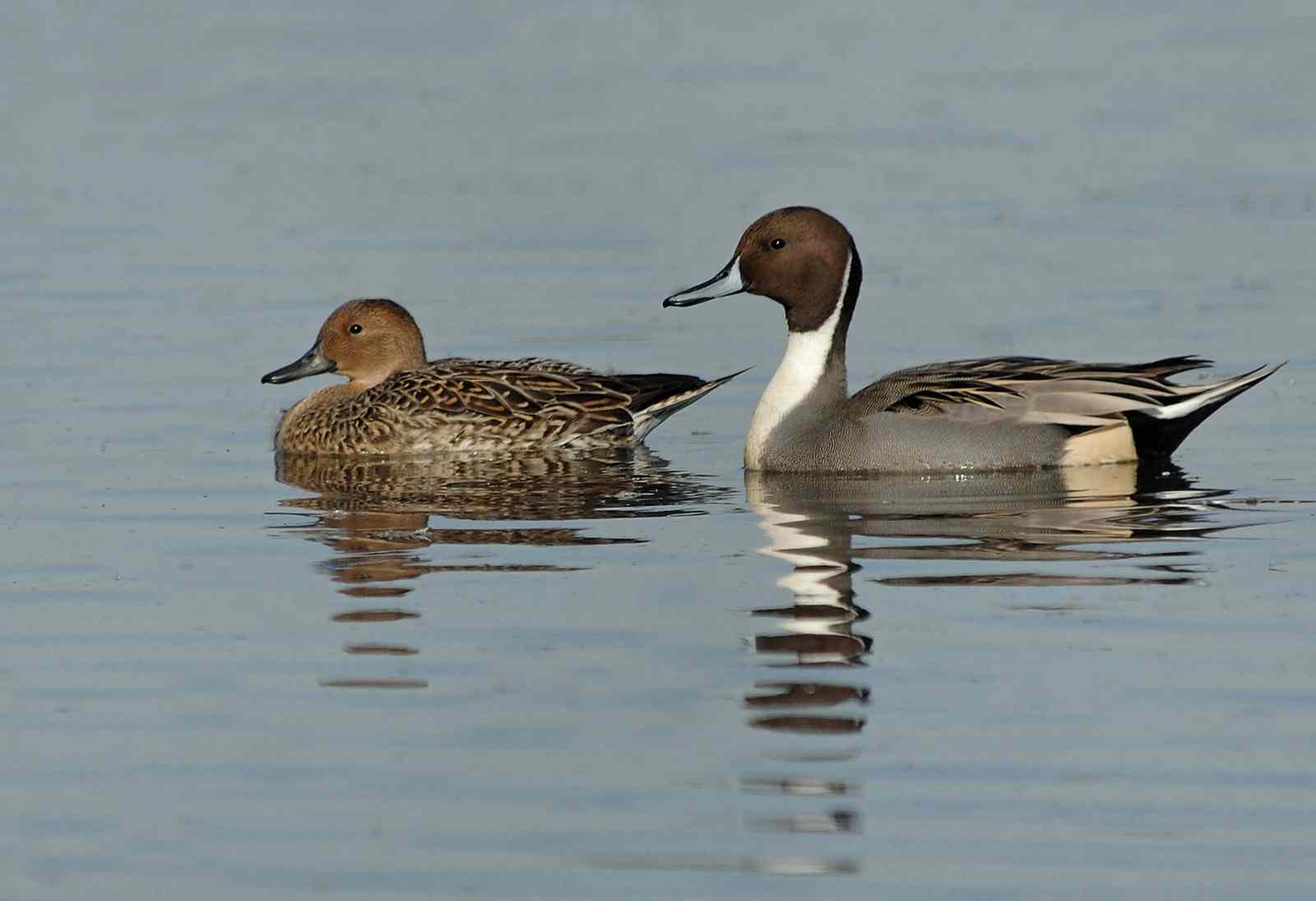 The Northern Pintail has a still distinctive but shorter tail than the Long-tailed Duck, which sticks up straight in the air while feeding. They also have dark heads and white bib-like necks and breasts. Maybe they’re messy eaters?

Now for our Ravishing Redheads 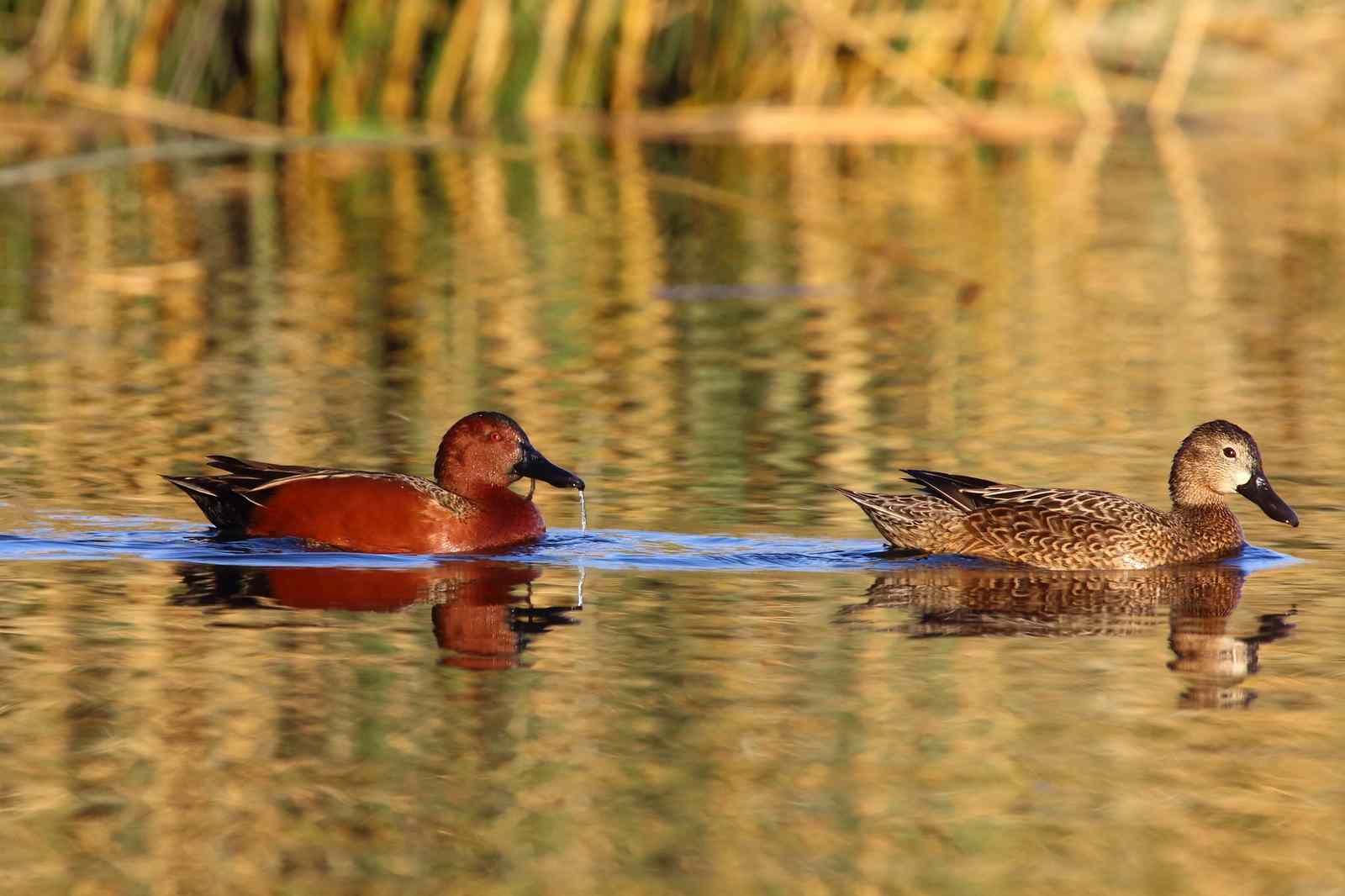 Cinnamon Teals are the reddest of redheads. They are primarily cinnamon-coloured with blue forewings (though these are not always visible).

Alright, these next two are practically twins but there are a few key differences... 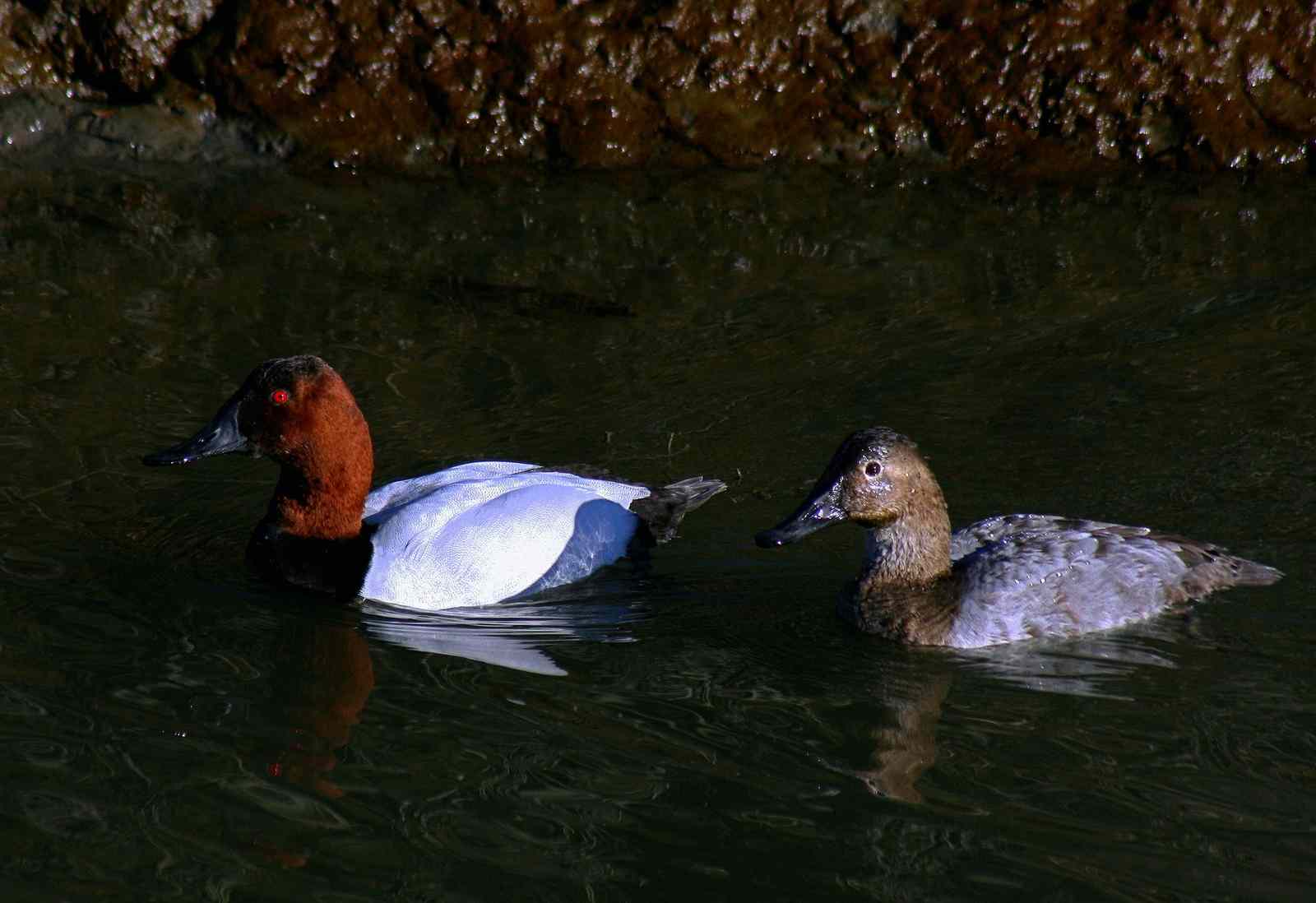 Canvasbacks have reddish-brown heads, white bodies, and dark breasts and tails. You can ignore all of this though, because Redheads, our next duck, look nearly identical from a distance. Recognize a Canvasback by its red eyes, and long, thin, black bill. 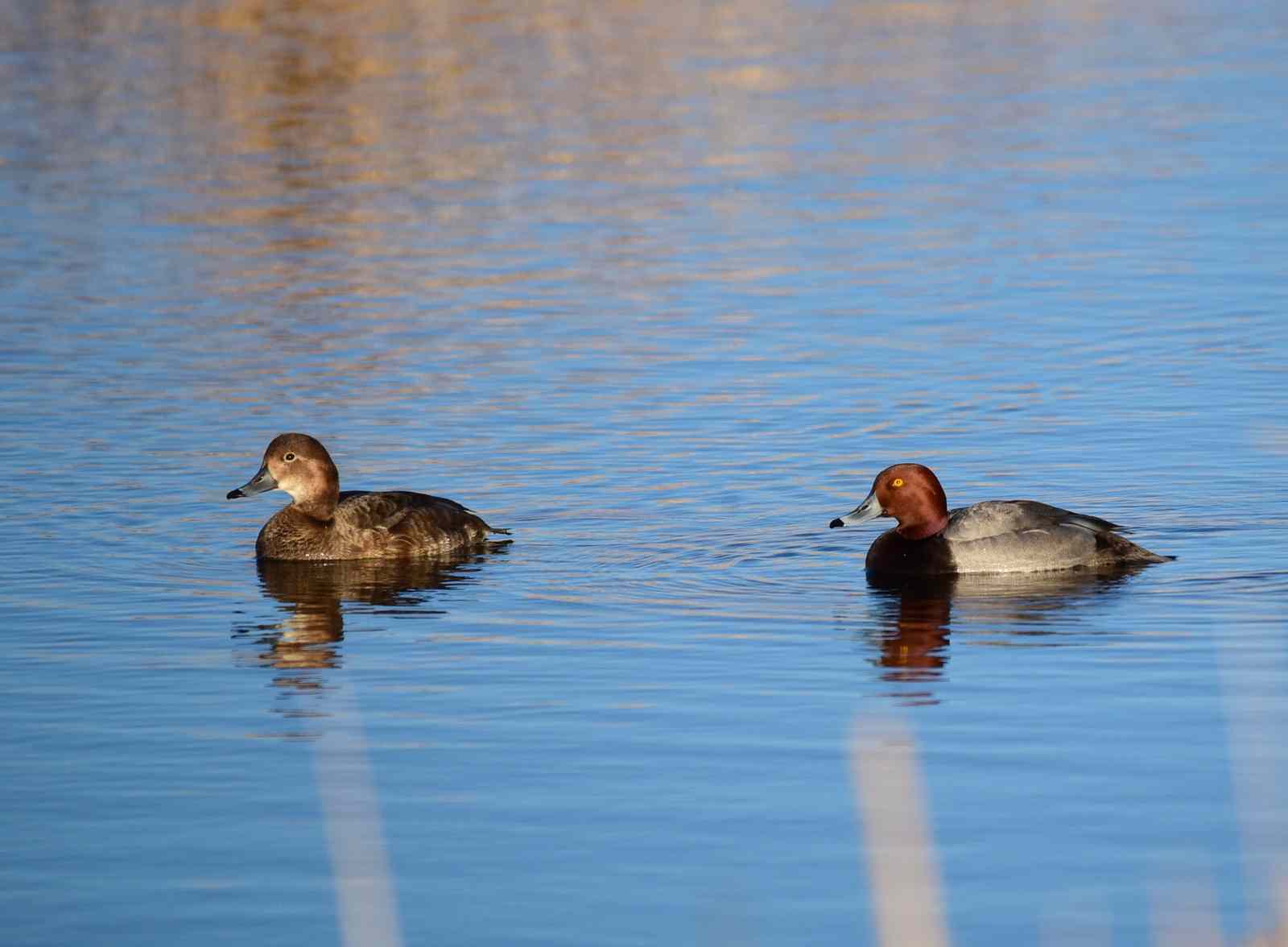 Redheads have greyish-white bodies, brownish-red heads, and dark breasts and tails. Are you feeling some duck déjà vu? I warned you. But unlike Canvasbacks, Redheads have yellow eyes and black-tipped grey bills.

If you can’t get a close look and you forgot to bring your binoculars (but seriously, never leave home without them) you can try to tell them apart by shape. Canvasbacks tend to be larger, with long sloping foreheads, whereas Redheads have rounder heads and stubbier necks.

Next up, Ebony and Ivory Beauties

Remember how much fun it was trying to tell two similar ducks apart just now? Well, now we’re really getting DOWN to business with three black and white ducks with nearly identical markings. 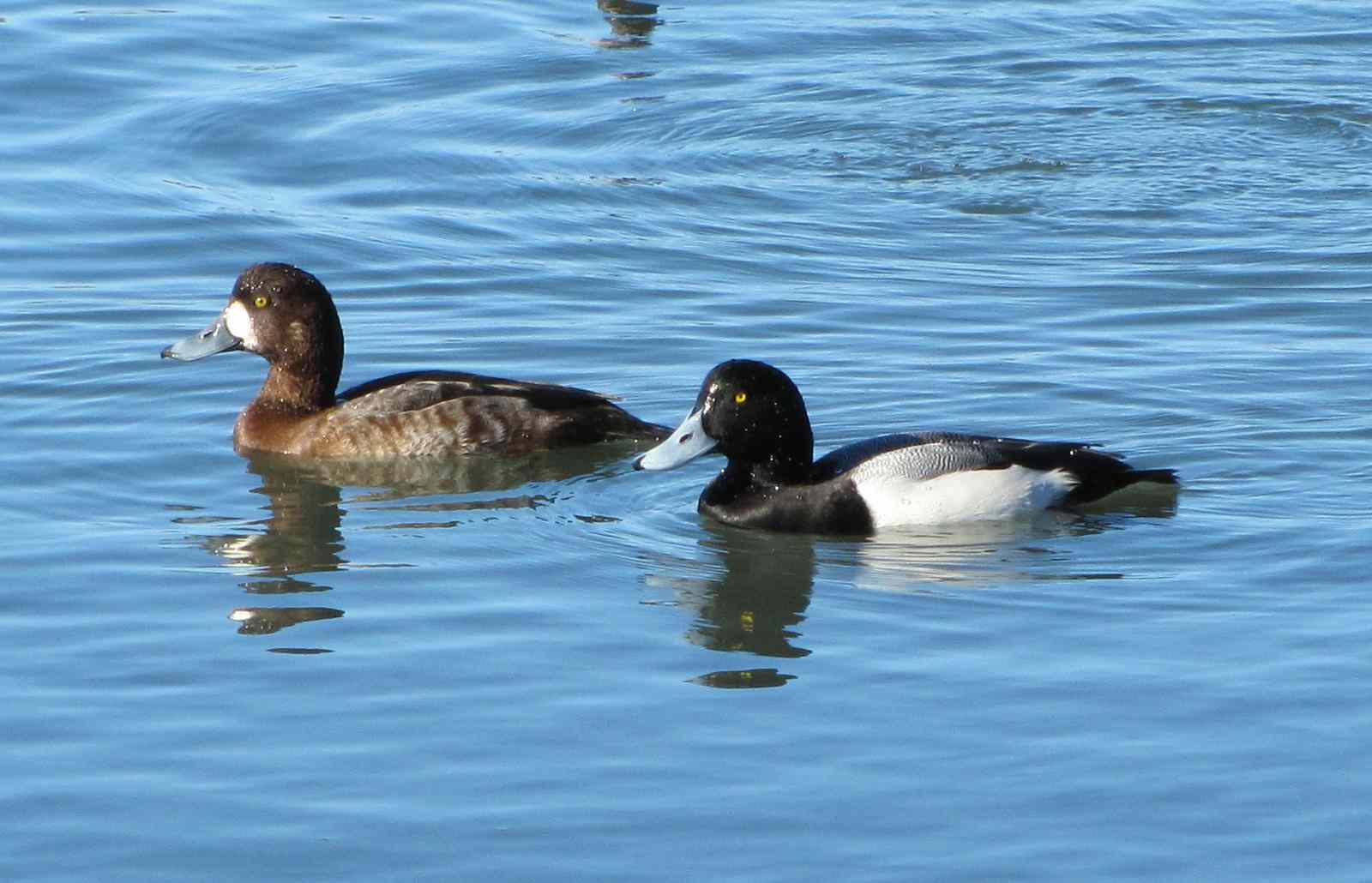 The Greater Scaup has a dark head, chest, back, and tail, white sides, yellow eyes, and a blueish-grey bill. 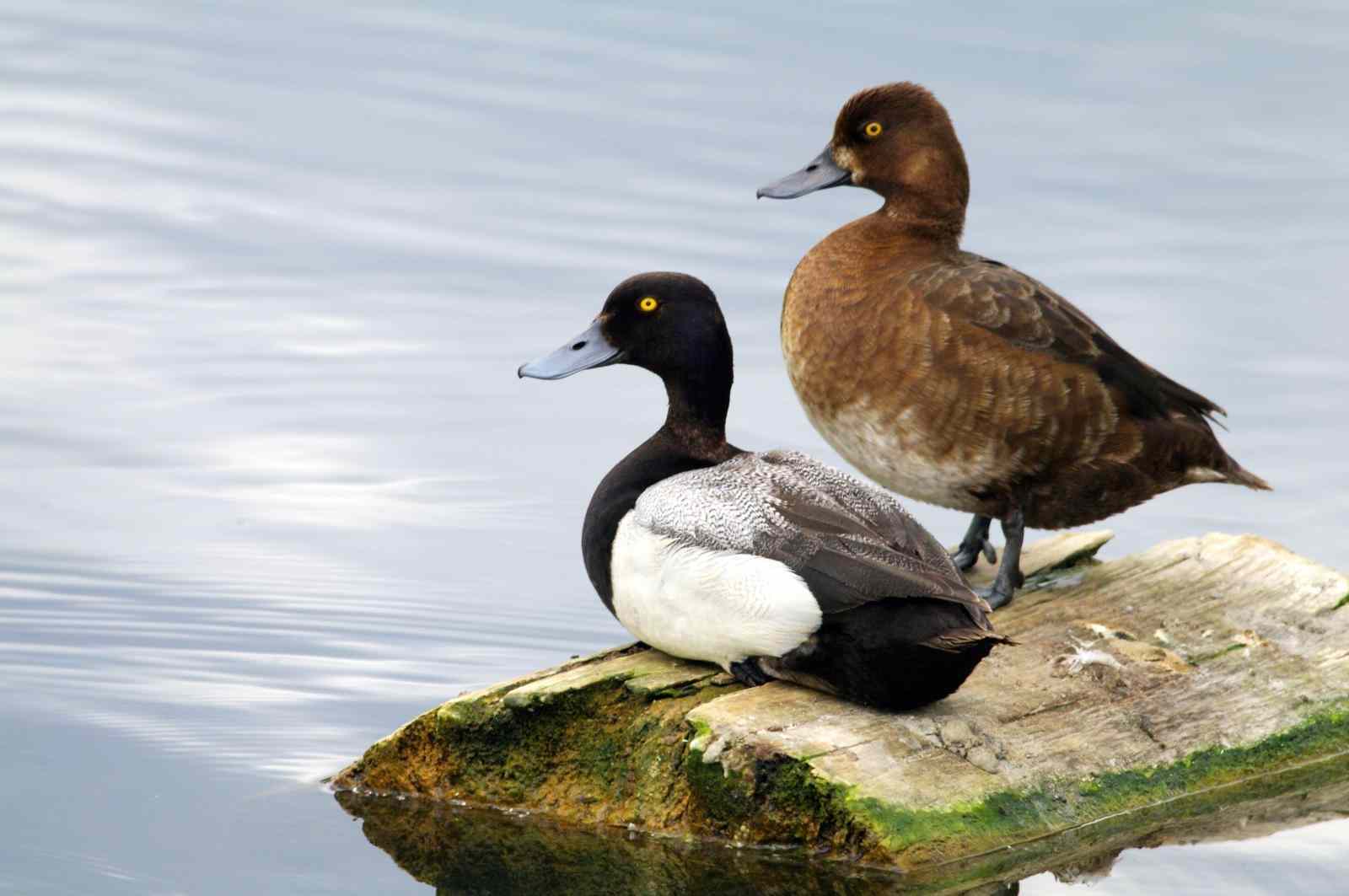 You know who else has a dark head, chest, back, and tail, white sides, yellow eyes, and a blueish-grey bill? The Lesser Scaup.

In North America, Greater and Lesser Scaups are colloquially known as "bluebills".

You would need pretty great lighting to see it, but the Greater Scaup also has a slightly green iridescent head while the Lesser Scaup has a purplish iridescent head.

Okay phew, we’re through the worst of it. This next duck has similar colouring to the Greater and Lesser Scaups, but a very different shape. 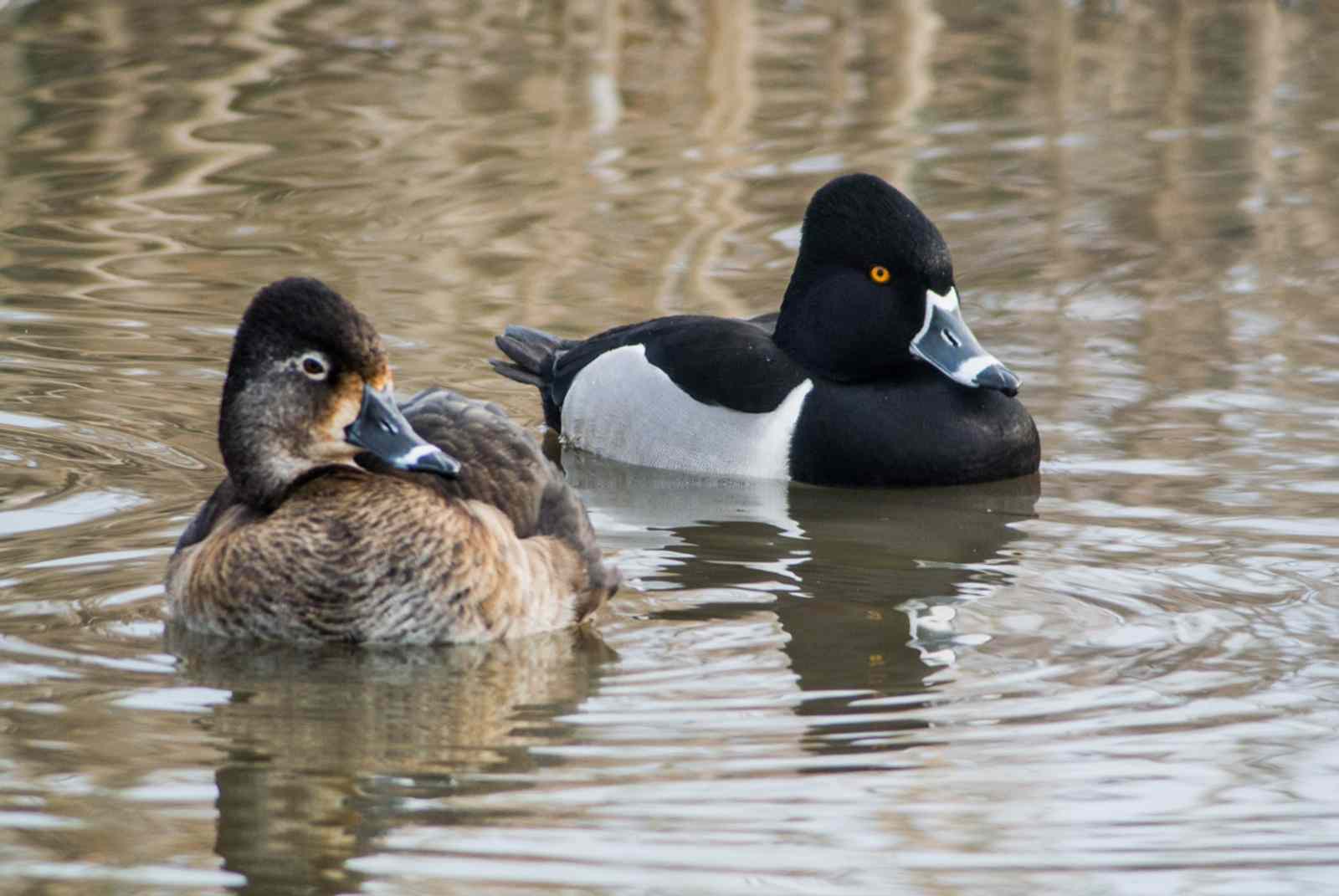 Yes, Ring-necked Ducks have dark heads, chests, backs, and tails, pale sides, and yellow eyes, just like our scaup friends. However they have pompadour-shaped heads, more greyish sides, and a white-ringed, black-tipped bill. Yes, they do also have a chestnut-coloured ring around their necks, but they're hardly visible and I'd suggest you not bother looking for this feature. 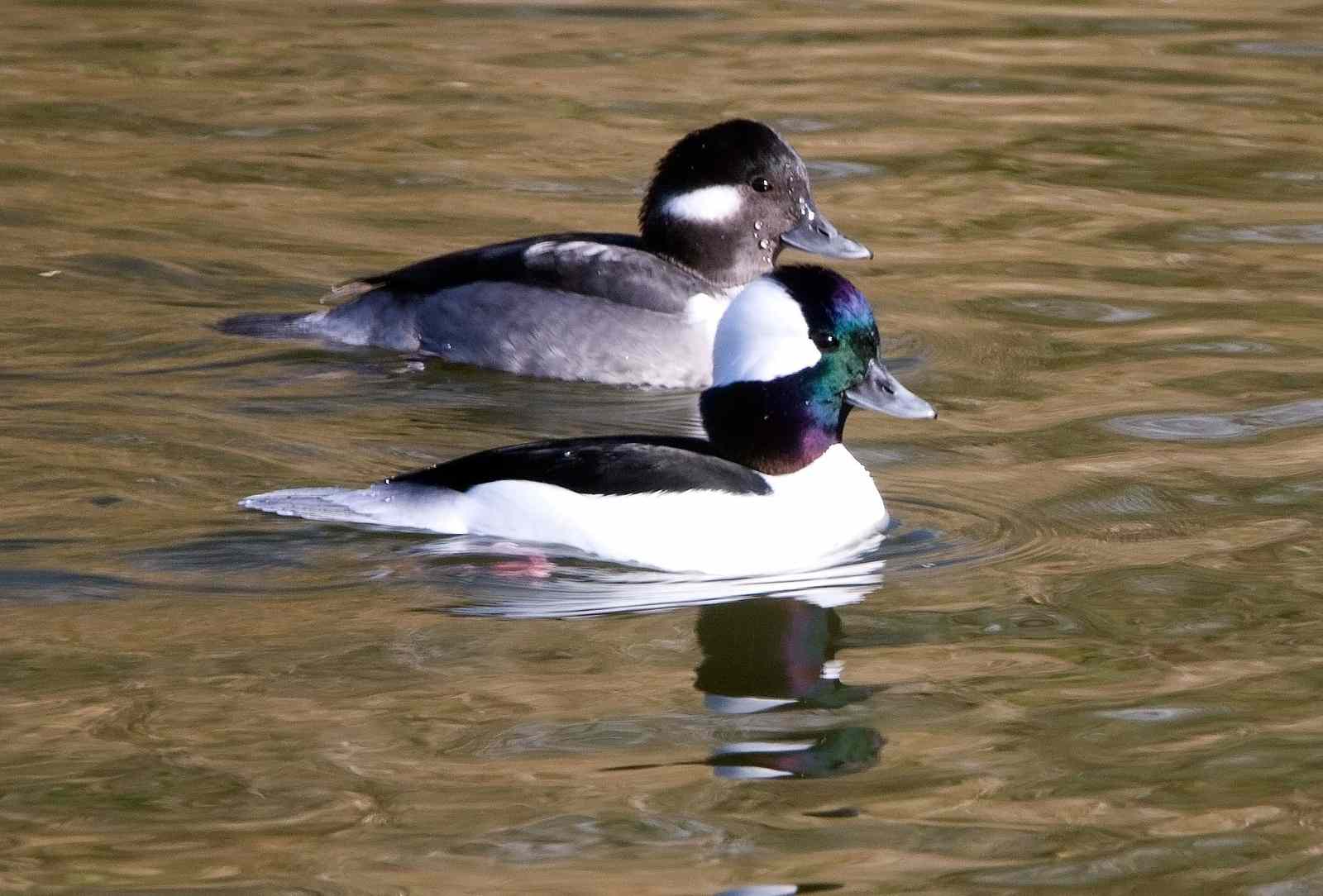 The best way to identify Buffleheads (especially if the sun is shining) is by their bright, gleaming wide sides, belly, and back of head. The front of their face and neck is glossy, purple-green iridescent black. They are small, cute, and compact, with round bobble-like heads.

If you catch yourself going, “Awwwww!” it’s probably a Bufflehead. Even the name is cute. I love them so much. Okay, moving on. 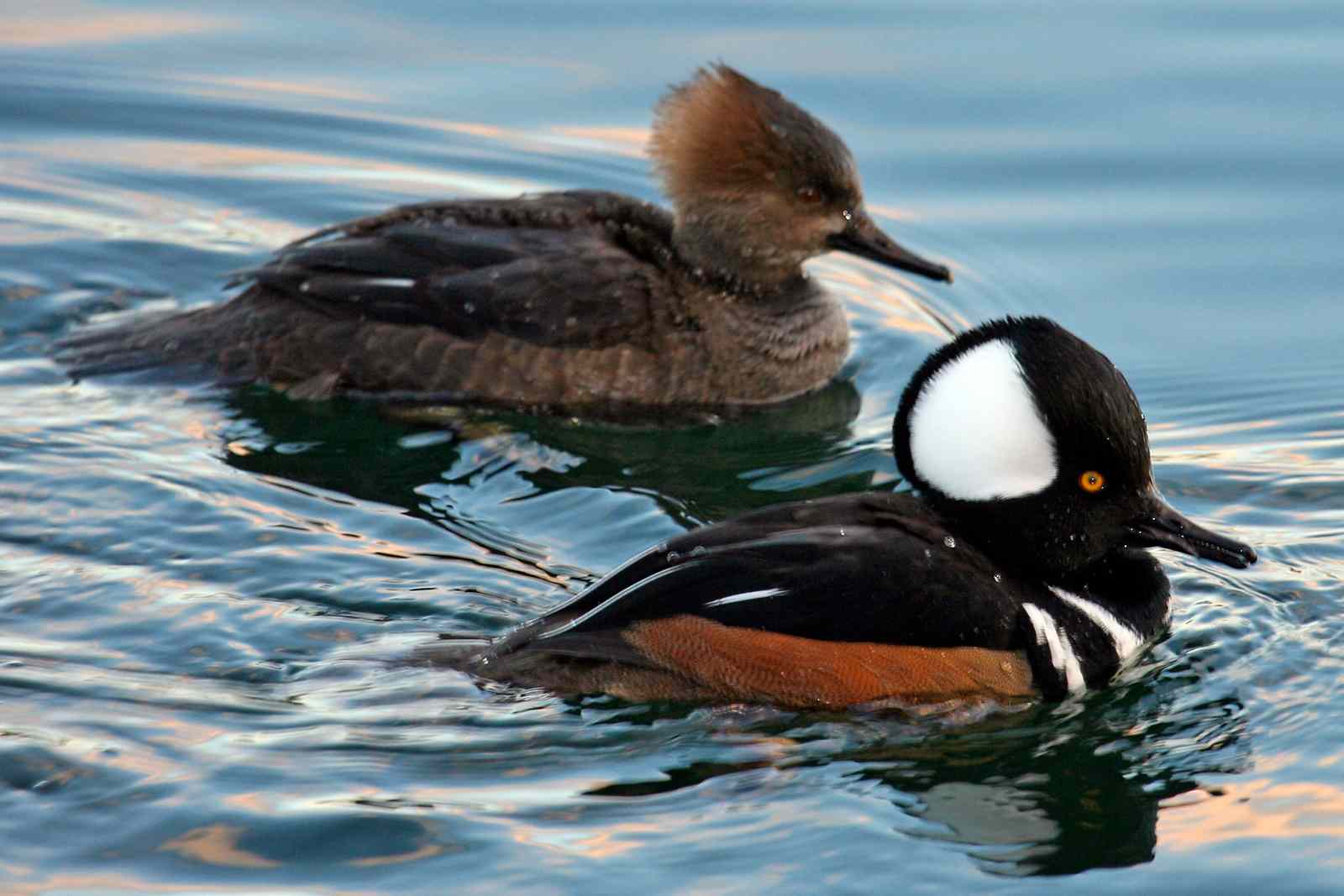 Check out the headgear on this fancy fowl! The best way to recognize a Hooded Merganser is by their white collapsable crest, brown sides, and white-striped chest. During courtship, their spectacular crests are on full display! 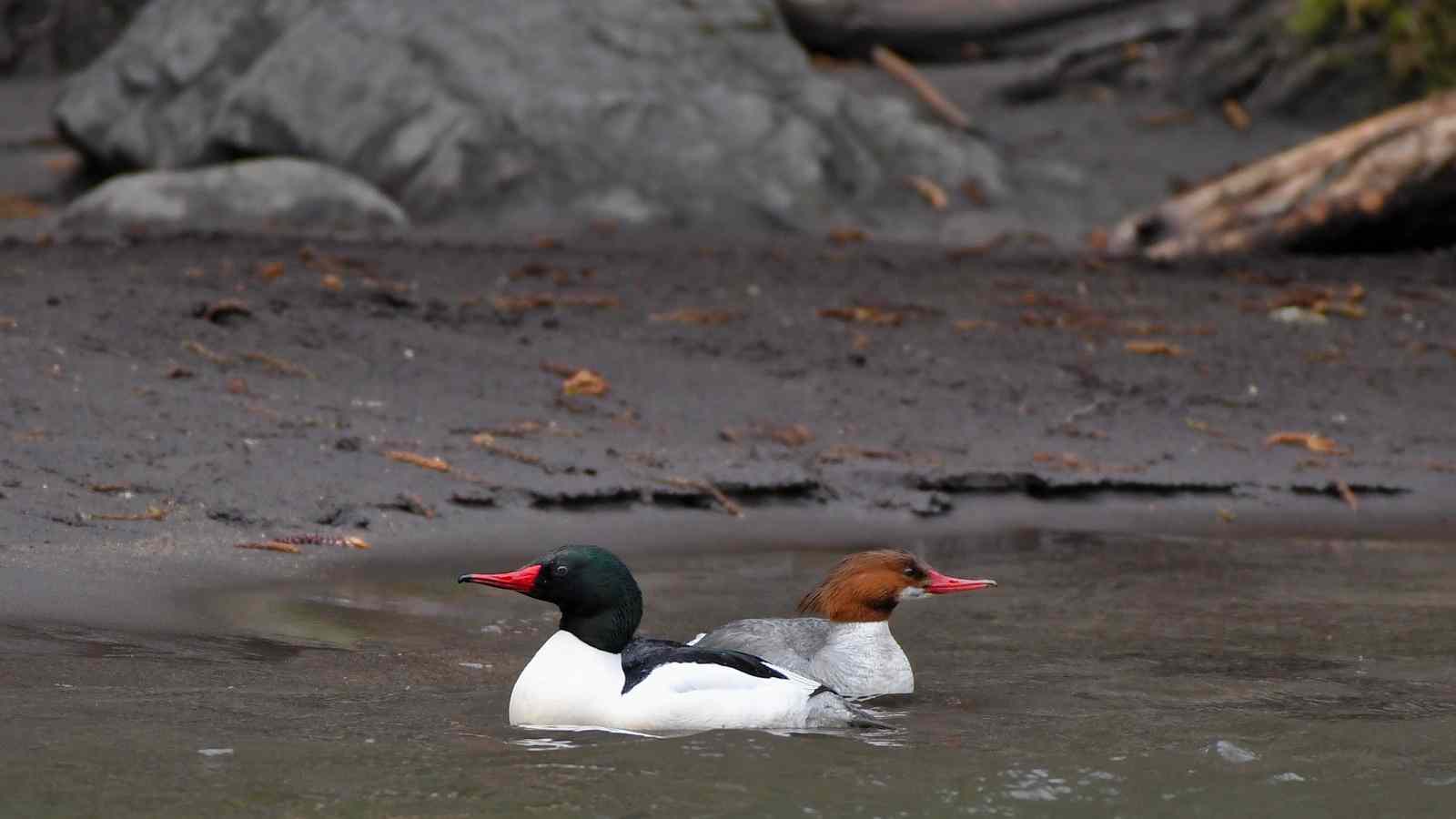 The largest of all Mergansers, the Common Merganser has a distinctive reddish-orange hooked and serrated bill with a black tip. They also have blackish-green iridescent heads and mostly white bodies. 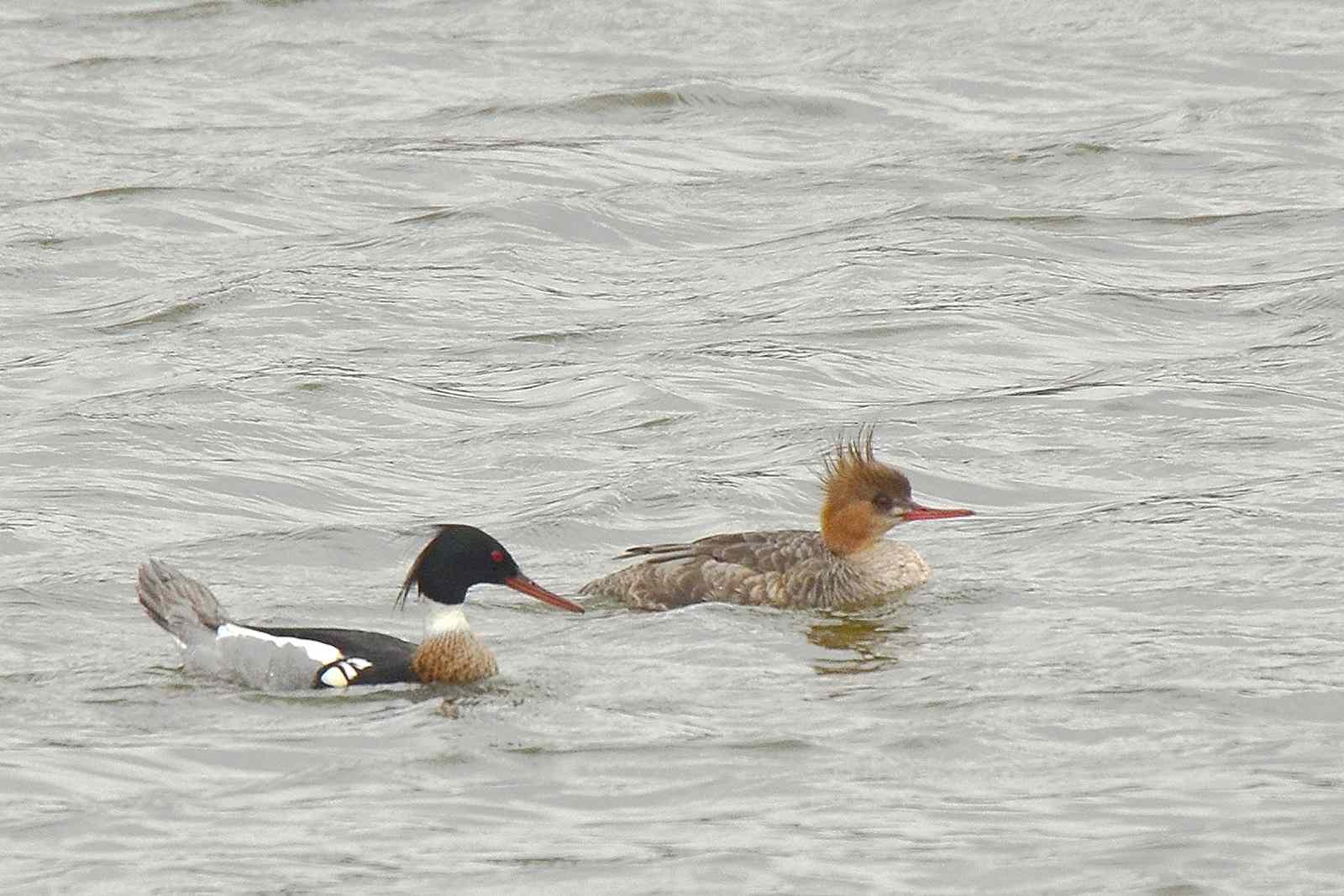 You can identify Red-breasted Mergansers by the wispy crests on their heads (resembling really, really bad comb overs). They also have red eyes and black and white patterns on their backs. They don’t have red breasts, but males do have a sort of cinnamon-y-coloured chest during breeding season. 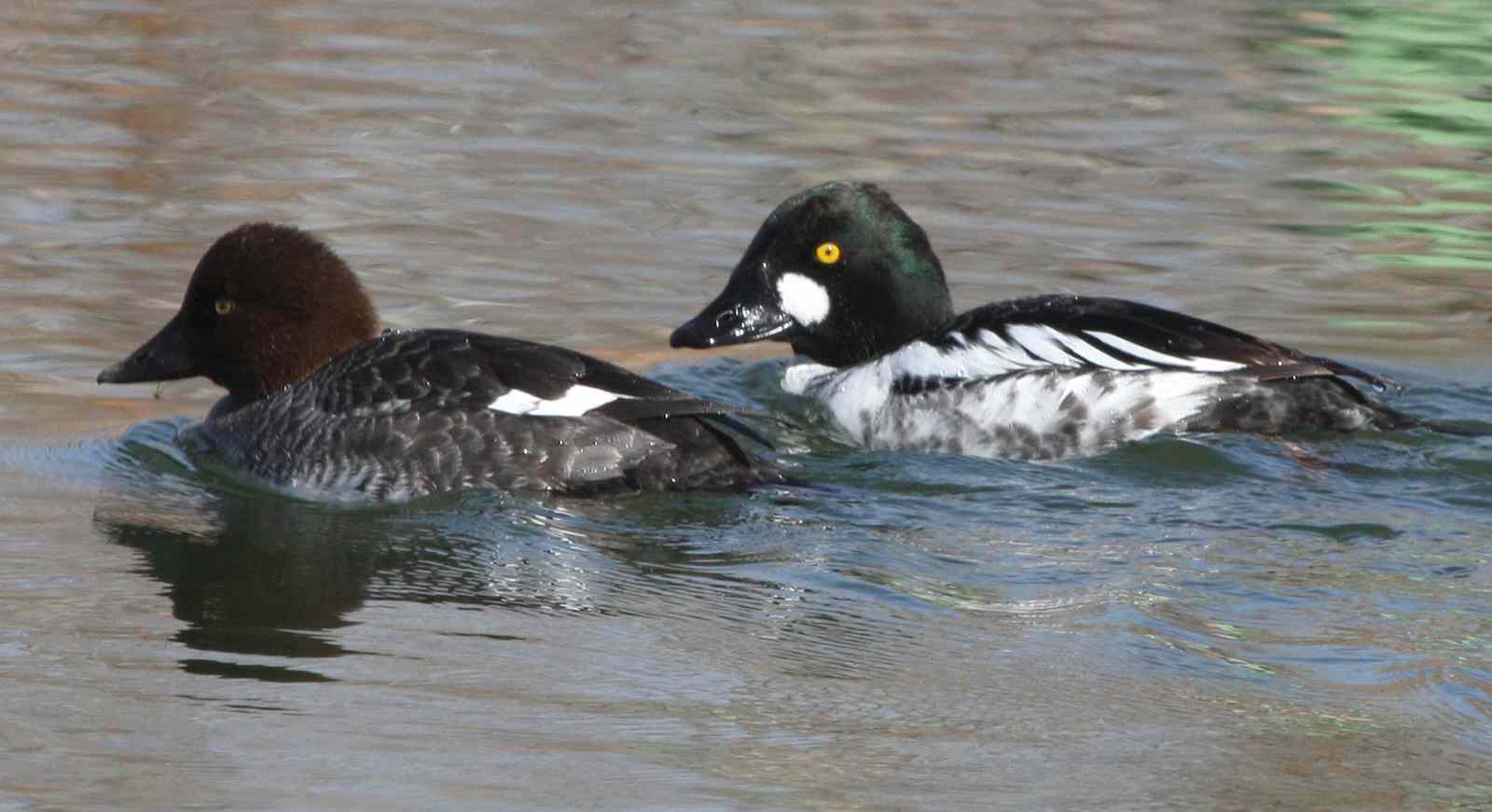 Common Goldeneyes have yellow—sorry—golden eyes, but so do a lot of ducks. They are better identified by the large white spots on their cheeks and their mostly white, black-streaked shoulders.

Goldeneyes are also known as "whistlers" due to the unique whistling sound their wingbeats make while flying.


You’ll know these unique ducks when you see them 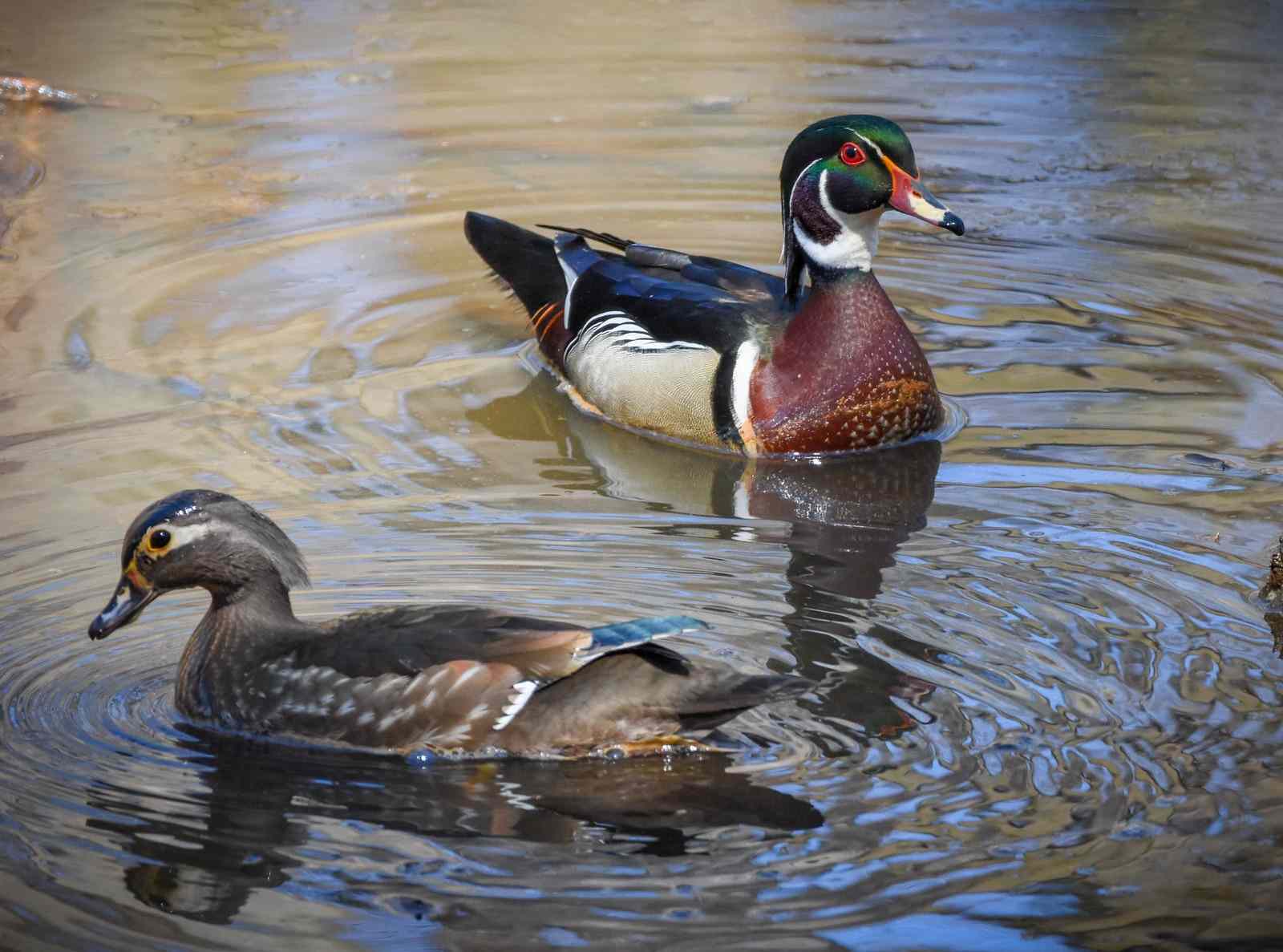 Look—if you’re lucky enough to encounter a Wood Duck, you’ll know it. Everything about these unmistakably gorgeous ducks is distinctive. From their red eyes, green helmet-shaped heads, blue back markings, light sides and bellies, and overall complex white lines, these ducks wood be a sight for sore eyes. 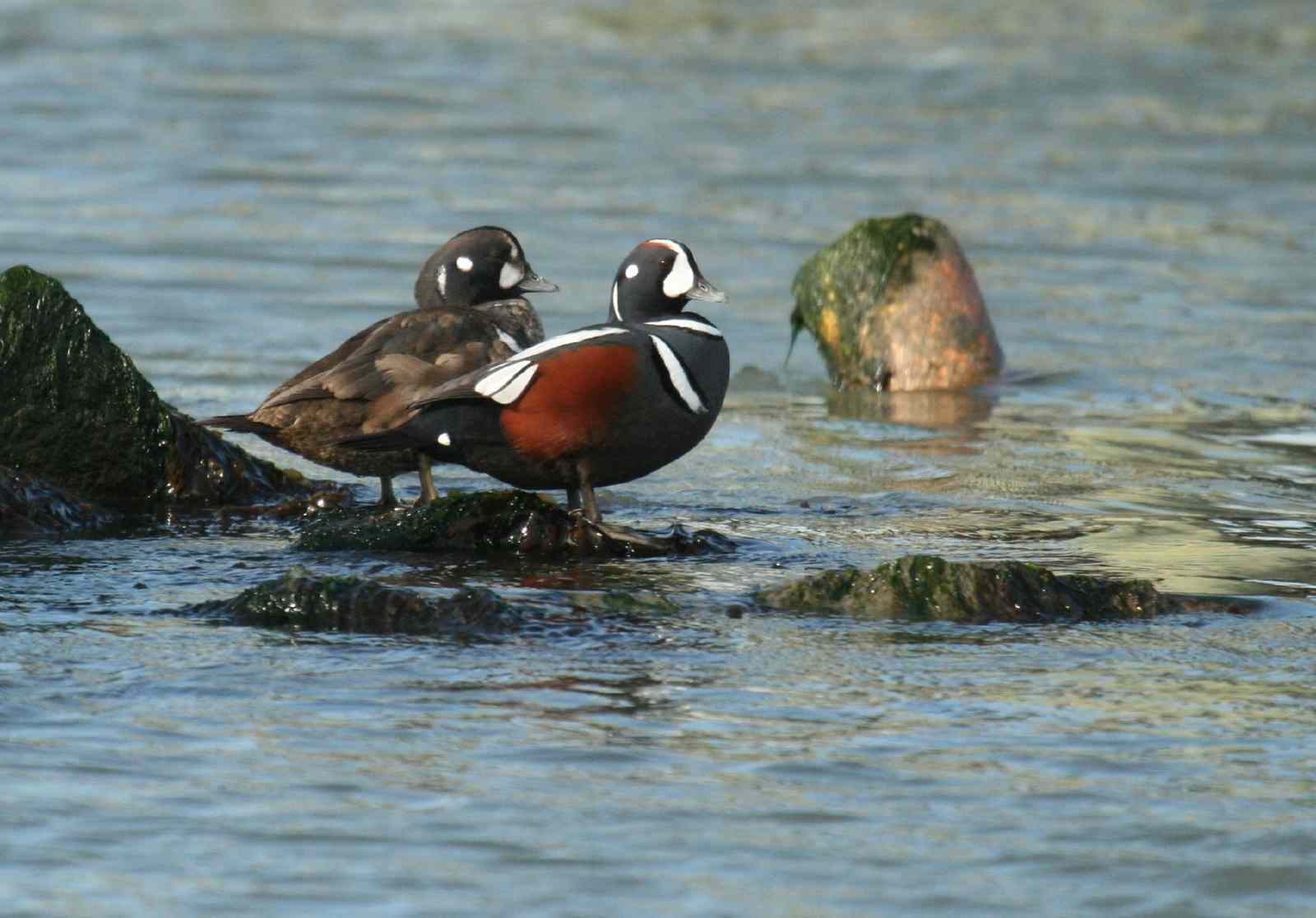 These small ducks only visit the Great Lakes in the winter, but they’re worth braving the snow to see. They have slate-blue bodies with rusty-coloured sides, but they’re best identified by their two white face markings and various white bands on their necks, sides, and backs.

Every year, an estimated 3 million ducks migrate through the Great Lakes. Many ducks call the marshes and wetlands on the Great Lakes shoreline areas home.

At the same time, wetlands are lost and decrease in quality by an estimated 1% every year, which is linked to population declines in American Black Ducks, Canvasbacks, Redheads, and Scaup.

When it comes to Great Lakes conservation, we need to get our ducks in a row.

Our Great Lakes are the most extensive freshwater system on Earth and are a crucial water resource. Restoring and protecting the Great Lakes is crucial for ducks, other wildlife, and people just like you.