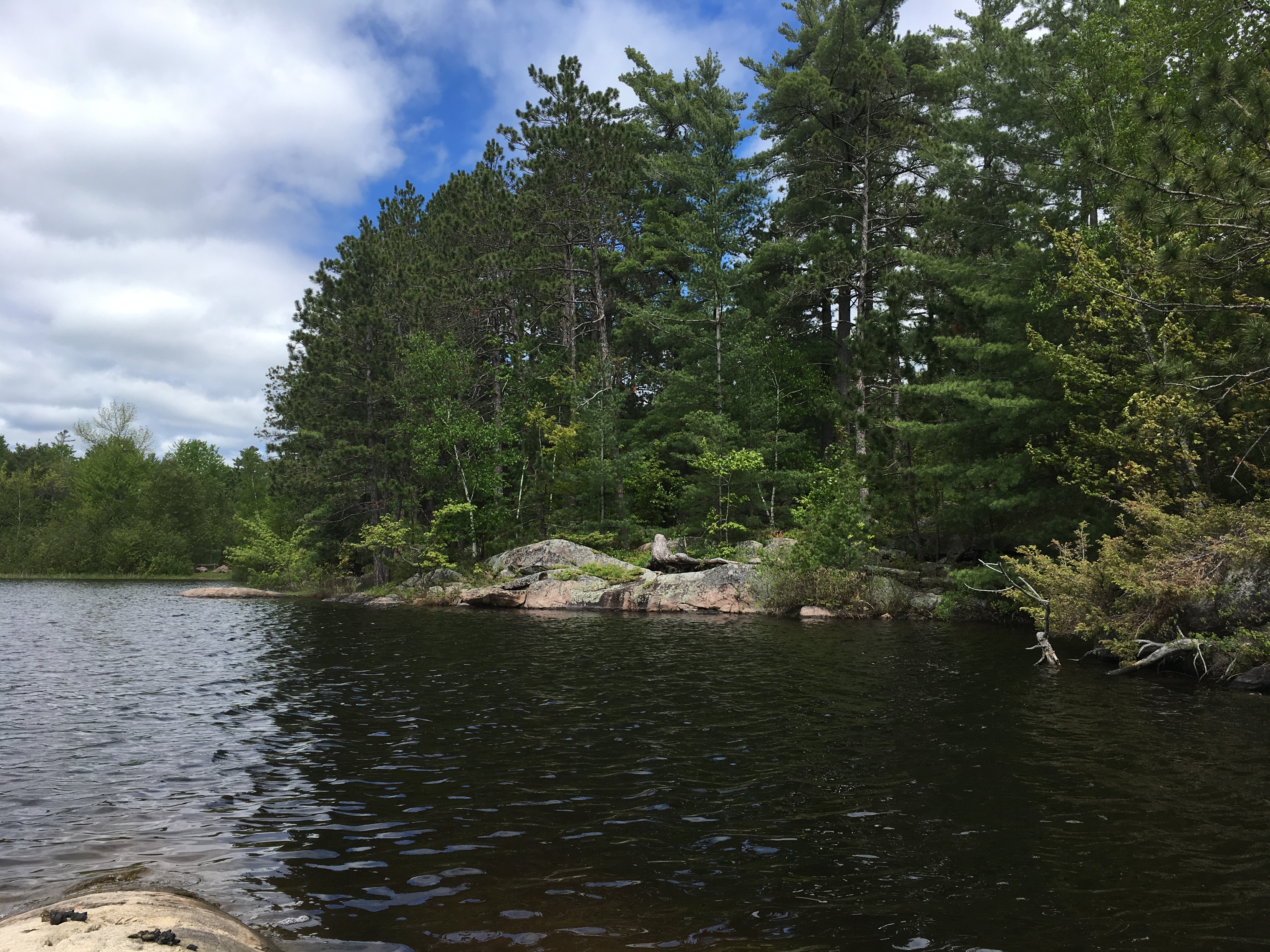 Previous Next
My paternal grandparents bought a rickety little fishing camp on the West Arm of Lake Nipissing back in the early 1940s. They wanted a place where they could go fishing together on the weekends, and there are really old photos of them in their matching plaid flannel camp jackets, smiling wildly and showing off their prize catch of silvery scaled pickerel. They named the camp “The Knotty Pines,” mostly because it was nestled into a hillside of the tallest pines.

My grandfather worked at INCO for most of his life, in the Copper Refinery, but he had a wood crafting workshop in his basement. It was there that he built his own fishing boat from scratch. He built other things as well, including beautiful chairs, beds, and elegant corner china cabinets, some of which I have in my own home now, but that fishing boat was the thing he was most proud of in his final years. It was, as he said, “seaworthy, even though it would only see Northern Ontario lakes.”

The boat eventually left the basement of his Sudbury house in pieces, driven east on Highway 17, out past Verner and Lavigne, and then was finally hammered together on the front ‘lawn’ of a simple fishing camp, somehow finding its lifelong home on the rough and tumbled edge of Nipissing’s West Arm. The boat was beyond heavy. Every fall, we had to lug it into the boat house, manoeuvring it up a ramp from the mucky water and pulling it into a utilitarian, metal sided garage that perched above a rocky shoreline. My father pulled more than just a muscle or two trying to house that thing every fall, before the snow fell.

Gramps told me once that it was based on the Viking style of boats. (When I was little, I thought maybe the actual Vikings had made it, mostly because I had a wild imagination. I remember wondering why there wasn’t a dragon head on the front, but I think that was mostly because I was taken with dragons at the time.) He had to explain that he had followed the Norse style of boat building. My grandfather had spent months and months building this big wooden clinker boat, sometimes known as a lapstrake boat. The planks in the boat ‘lapped’ over one another. It was beautiful.

When I got nervous, going out fishing with my dad and grandfather in the pre-dawn summer dark, Gramps would always say, “Kimmy, listen: this boat is safer than any other boat around. The Vikings had boats like these. They’re much safer than flat bottomed boats, or those little metal ones you see zipping along The Narrows.” Then he would joke, winking over my head at my dad, “Don’t worry; you have your life jacket. Even if the boat did go down, which it won’t, you’ll float.” Usually, he delivered these bits of wisdom with a straight face, and then turned away as he cracked up. He and my dad always thought it was funny, to tease someone under ten who was terribly gullible, who believed them without question.

What I loved about that boat, and about being on the West Arm, and The Narrows, of Lake Nipissing, was when my grandfather used to take me out, around the point, into the big bay. He’d turn off the motor, let the boat drift, and we’d sit in silence together, just the two of us. We’d listen to the crows croaking in the trees on the shore, and he’d point out ripples when a fish would jump up, breaking the surface. I just knew I felt a bit like an explorer in that boat, especially when he’d let me lean over the sides, holding onto the back of my pants by the waistband so that I could reach out to pick water lilies and bring them back to the camp.

It was silly, really, to pick water lilies, because they only ever died when you put them in a low china soup bowl on the long wooden kitchen table, but I still loved the way their petals felt like silk in my hands, and how elegant they were. That they didn’t last, once you plucked them from their tall floaty roots, was lost on me then, when I was just a girl. Now, I wouldn’t disturb them at all, knowing that sometimes it’s more about being in the moment, about honouring and respecting that beauty without trying to physically capture it. You can leave something, untouched, and still carry the beauty with you as you go. That’s a lesson I’ve learned since I’ve grown up.

I went back to the West Arm of Lake Nipissing last summer. The family camp had long ago since been sold, just as my parents both fell ill in the mid-2000s, but I found a spot near a public boat launch and picnic area, where I used to sit and read, or write, and sometimes swim. For me, Nipissing is part of my childhood and young adulthood. When I return there, perching on its rocky shores, I know it recognizes me. I can hear it in the breezes through the pines, and in the lapping of the water. It always welcomes me back.

The only things missing are the camp, the big old wooden Viking boat, and my grandfather. The waterlilies are still there, and so are the memories of adventures in the bush, sunburns on pale skin, long cribbage games on late nights, hooking minnows for a fishing trip in the boat, and watching the stars from the dock late at night.