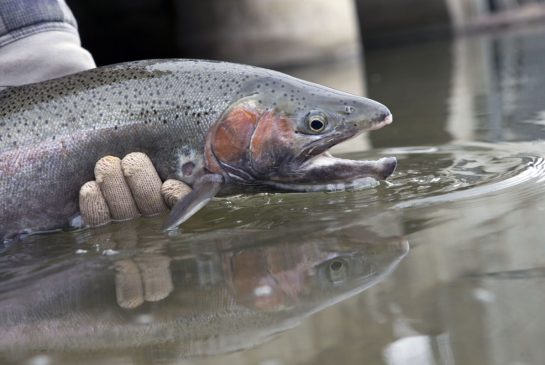 Previous Next
My Watermark is the Rouge River, Ontario.

Growing up in the Greater Toronto Area, it was common for us kids to go down to local ravines, to play capture the flag, have mud wars or go fishing. It was these moments of play and discovery that had created memories that would last a lifetime. These memories played a pivotal role in creating the passion I have as a protector and steward of the lands we cherish today.

I remember like it was yesterday, the first time we went down the Rouge River, we witnessed something spectacular. Hundreds of fish, ferociously heading up river. Back then, we had no idea we were observing such an important stage of the lifecycle taking place, but now know it as the annual spring migration of our beloved Rainbow trout. These images replayed over and over in our heads as we raced back home to call all of our friends, family, neighbours, and tell them what we have witnessed. Now the whole town was excited to see what we had discovered.

I set out on a journey to learn as much as I could about these fish, and explore the diverse ecosystem in my own backyard. Going down to the creek to sit and watch as they jump, swim, smash, and fight their way against raging currents, not understanding why they are exerting so much effort to head upstream. All this effort so they could ensure that their young have the best habitat nursery habitat available. We have blocked access to these waters, forcing them to adapt to subpar spawning conditions. Even when their journey had come to an end at the base of a dam, they continued to fight and smash against the concrete barrier with no hope of getting past.

As the season progressively grew warmer, I was able to teach myself the skills required and rules to use while trying to get one on the end of my line, to this day it is still a struggle. Needless to say, the thrill of the bite and anticipation is what keeps me coming back, striving for the next big one, the next bite.

As an inquisitive 16 year old, I had many questions. Why these fish where here, why this creek, why this time of year, too many questions with no one to answer. To further my knowledge and fuel my passion, I got involved as a volunteer with the Metro East Anglers fish hatchery located in Markham, Ontario. As I volunteered and gained expertise at understanding the dynamics of fish procreation and understanding the importance of a healthy ecosystem, I still felt as though there was more information to be discovered. As I became more knowledgeable about the destruction of our environment, the more I wanted to know how I could have a positive impact and be a voice for change.

About a year into my experience, the Metro East Anglers (MEA) and Ministry of Natural Resources and Forestry opened up the Milne fish ladder located in Markham, Ontario. This fish passage system was constructed as an apology from land developers who had destroyed precious habitat on a ever changing waterway.

At this time I started to see a trend, lots of migration barriers but no ways around them. Once the ladders were built, it’s as if the fish knew there is a light at the end of the tunnel. We saw fish passage immediately after opening, managing, and maintaining the systems. Only to understand that each ladder helped progress the fish’s migration slightly, before another barrier was blocking the routes. This further accelerated my need to ask more questions, why are these dams here? What do they do? How long have they been here? Only to be told “don’t worry about it kid, they aren’t the issues we face”. I wasn’t ready to accept “don’t worry about it” for an answer.

If we could pull out a map of every major north shore tributary of Lake Ontario, and see the migration barriers present, we could visualize why our ecosystems are in a threatened state. Some of these barriers have been in place for over a century, from previous farming operations. Combined with aftermath of hurricane hazel (1954), created an immense amount of pressure on local elected officials to create flood control measures. Flood control management was at the forefront of the agenda, rather than ecosystem management. Dams were put in place as means of tackling the number one priority.

Due to these major obstacles, we have already experienced some pretty significant change within Lake Ontario, including the loss of our original Lake Ontario Atlantic salmon. Migration barriers and urban sprawl have created a recipe for significant degradation of previously undisturbed habitat. I often ask myself, “How can we bring back salmon populations while we still have a mismanaged ecosystem”?

The issues that made them go extinct are still intact, doing what they did long ago, stopping those fish from what they are born to do. Housing markets continue to spread far and wide across the green belt destroying what habitat we have left. During these crippling years, we get hit with the accidental introduction of Zebra mussels and Quagga mussels into our ecosystem has forever hindered the biomass of our waterways. It’s hard to believe the fish we observe at the ladders, keep coming back year after year, by the hundreds to spawn, to give life. What would happen if we actually gave the fish a chance to flourish in waters they haven’t seen in some systems for over a decade?

Other watersheds have proven that when given the opportunity, the fish will flourish in an unimpeded river. Not only the migrating species, but all living organisms benefit from stream restoration and habitat reconstruction. When fish have access to the cold, clean, undisturbed waters without humans playing a factor, benefits are widely observed within the ecosystem. As resident fish move throughout the system, they grow proportionally larger as they engorge on the fry, eggs and carcasses that are left behind from the earlier spawn. Baitfish populations have access to cold, undisturbed waters to find shelter and grow, fine sediments and gravel that have been trapped can finally make its way to the rivers and provide much needed coastline refuge and spawning habitat for near shore species. The growth of the river estuaries becomes significantly larger, providing new habitat for lake dwelling predators and prey. Migratory birds can find nesting sites in the newly created marsh lands, while native plants and animals can replenish what we have lost from previous years of mismanagement. If we were able to be provided with an opportunity to commence restoration efforts, it would yield us with a vibrant ecosystem that we all can enjoy and cherish for generations to come. Allow Mother Nature to help replenish herself for the future of our environment long after you and I are gone.

For those who don’t understand the negative impact dams have on an ecosystem as a whole, they view dam removal as a “radical activism”. At one point, everything we consider the norm now, was at one point considered radical. “Remember when people smoked on airplanes? The tobacco industry held sway, the way the oil industry does now. They had teams of PR people and lawyers; even though the medical world knew that smoking caused lung cancer and so did they, they continued to thrive. For fifty years, people worked to connect cigarettes to lung cancer and to ban smoking. The tobacco companies appeared invincible. But the anti-smoking groups kept at it, year after year, slowly and steadily until smoking was banned on airplanes, and then in restaurants and bars, and, finally, CVS stopped selling them. It was like that with gay marriage, too. Unthinkable and then…Done” (Chouinard 1)

We need to convince the public that this mentality is how we can move forward with creating change. We need to be leaders for the generations to come after us. With good communication and a proven goal, we can help to have transparency with our elected officials who manage our land and water, who have become complacent with the current system. We cannot rely on people that only want to look at dams as a great science tool for sampling, or for tourist’s that look at fish below a dam as “exciting and beautiful”, all while those same fish fade away due to our ignorance. There must be a time that we as citizens find the strength within ourselves to help those without a voice. It’s these species that continue to be hindered by constantly having to adapt in our ever-changing culture and climate. What if we give them the opportunity for a healthy life?

Unfortunately, we cannot change the presence of humans in the world, nor can we undo contamination from invasive species, but we can attempt to minimize the negative effects they have on our already troubled ecosystem. We have to find ways to allow these fish the highest chance for survival, and this is by opening up the migration routes.

As activists, we will continue to fight for those who cannot speak. These fish deserve a healthy environment to grow and spawn. Why do we restrict Mother Nature to the confines we have created, knowingly leaving barriers in place that have resulted in the population demise many times before? Are we scared of change? Are we waiting to lose another species?

Encouraging our youth to be involved will ensure they gain respect for Mother Nature that is needed to be able to protect these lands for generations to come. Enjoyment sparks interest, and interest sparks education. These youth will develop skills to succeed and make change, while being a part of a team from the grass roots level. Letting our kids go down to the creeks and witness the events for themselves, and fuel the passion that transpired us to become who we are today; protectors of this great land! You and I have the ability to ensure we won’t be the last generation that gets to enjoy this miracle we call nature. Only you and I can make change, and we a stronger if we do it together.