— “The Wreck of the Edmund Fitzgerald” by Gordon Lightfoot


It seems implausible that a 13,632 ton freighter could sink so suddenly and so quickly. Impossible that a 222 metre long ship could disappear, leaving no survivors behind, as recently as the 1970s.

But that is precisely what happened to the SS Edmund Fitzgerald one stormy winter night on Lake Superior.

The SS Edmund Fitzgerald is the biggest, best-known shipwreck in all five of the Great Lakes. After a 17-year career transporting iron ore, the Fitzgerald sank on November 10, 1975, near Whitefish Point in Lake Superior. The wreck was considered the worst shipping disaster the Great Lakes had witnessed in decades. 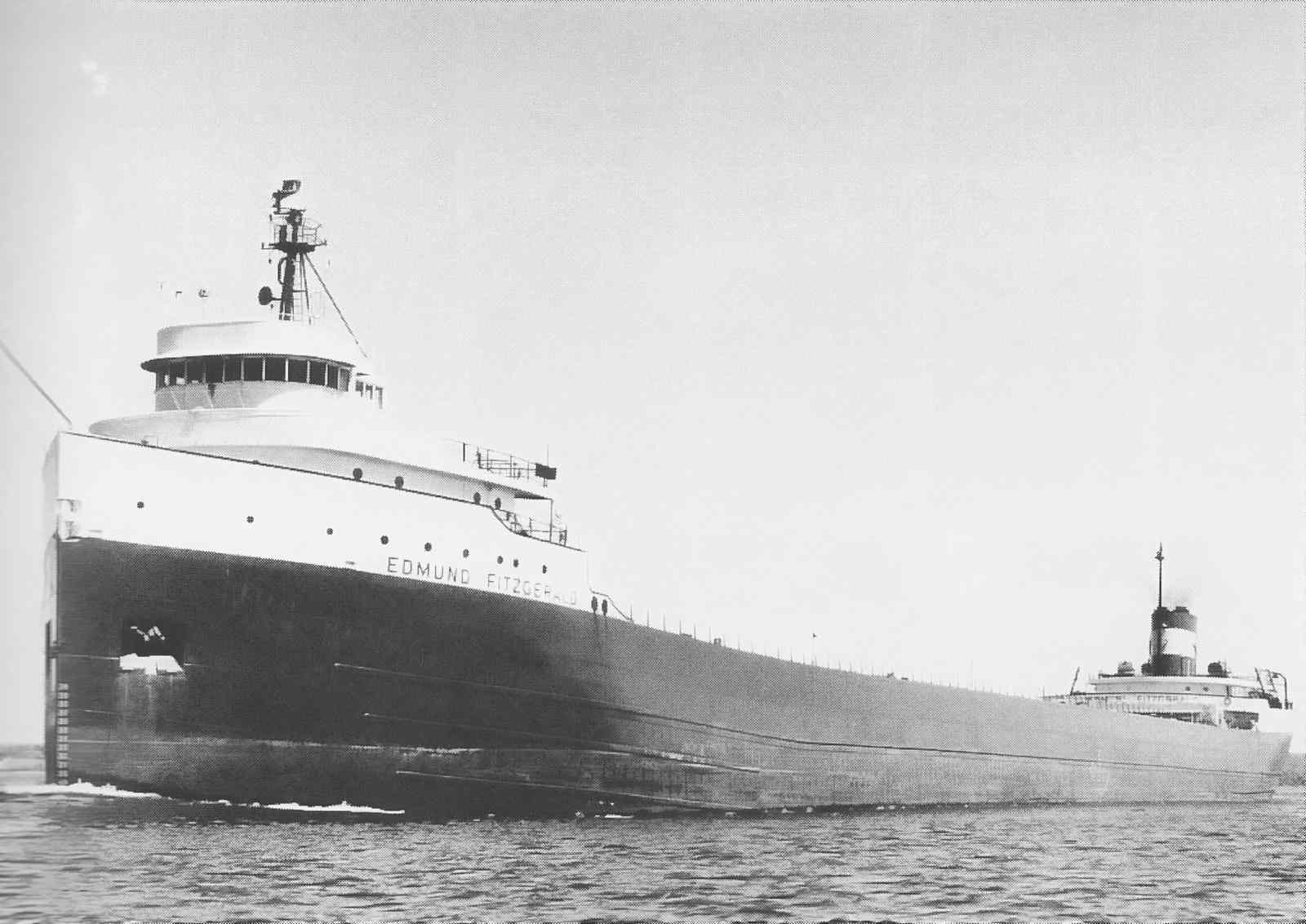 Exactly why the Fitzgerald sank is a mystery to this day.

Tragically, the entire crew of 29 died, and no bodies were ever recovered. The crew members were from Wisconsin, Michigan, Ohio, and Minnesota. They were porters, engineers, oilers, maintenance workers, watchmen, deck hands, wheelsmen, and cooks. Many of the crew’s friends and family are still alive today. 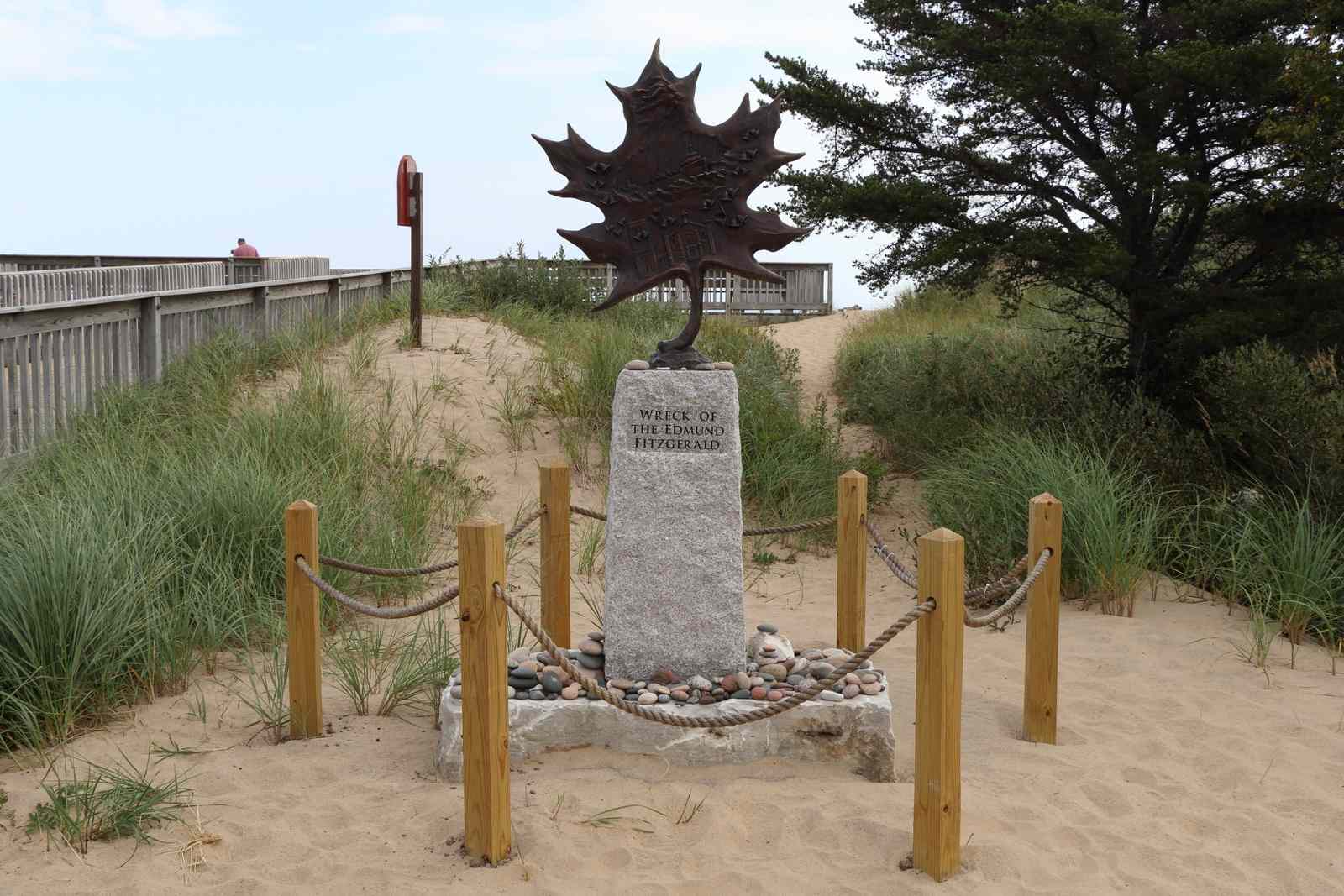 The Fitzgerald departed from Superior, Wisconsin on the afternoon of November 9, 1975. Captain Ernest M. McSorley commanded the enormous vessel during what was meant to be his last trip before retirement. Packed to the brim with ore pellets, the ship headed out to a steel mill on Zug Island near Detroit, Michigan.

Soon after leaving port, the Fitzgerald met up with the SS Arthur M. Anderson, a cargo ship operated by Captain Jesse Cooper. The two ships were in radio contact throughout their journeys. The National Weather Service had issued gale advisories for that day, but the ships pressed on. 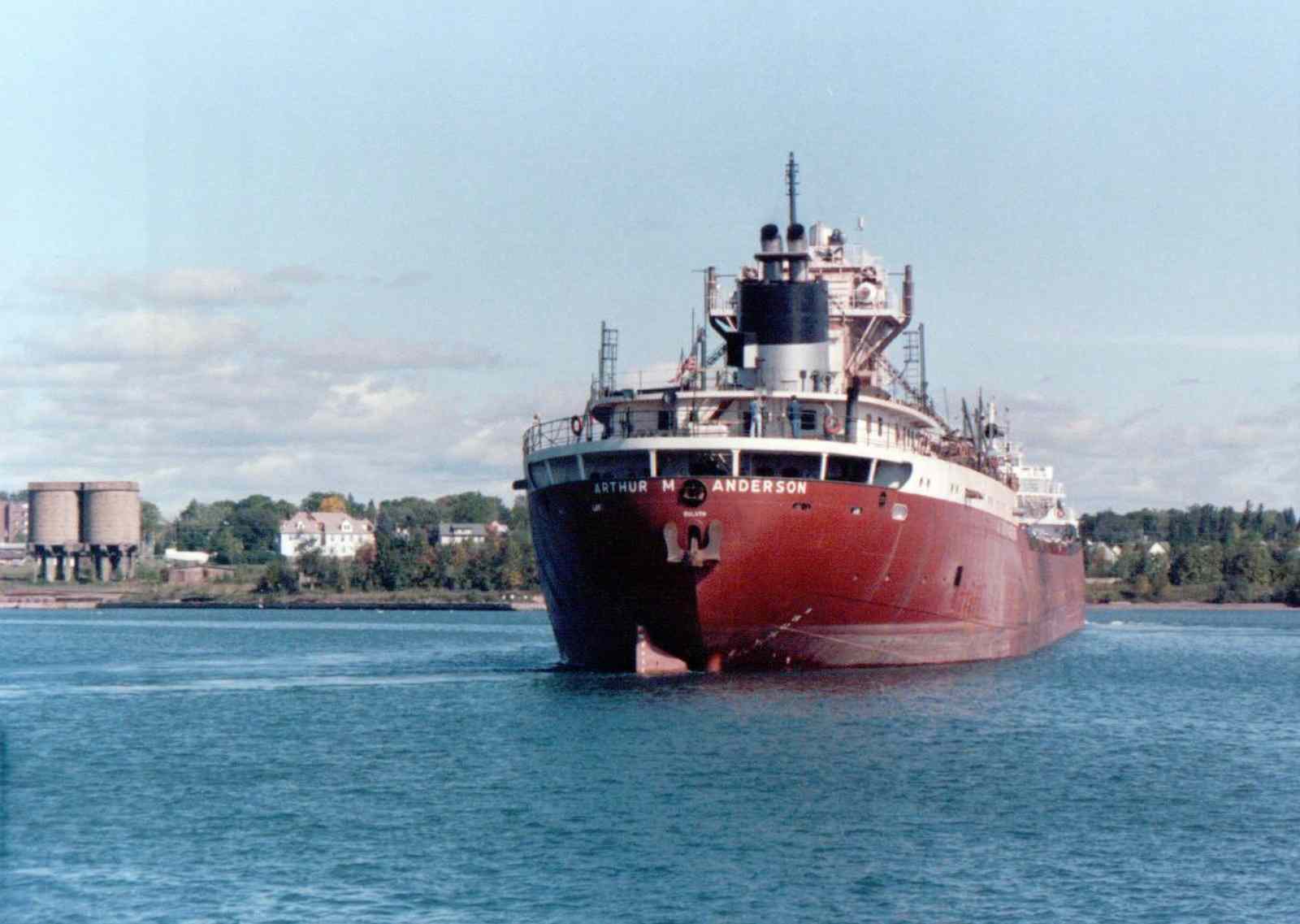 By the following day, a ferocious storm was brewing.

The National Weather Service had upped their gale advisories to an official storm warning. The storm whipped up winds of over 160 kilometers per hour–nearly as strong as a hurricane–and waves up to 11 meters high.

Winter storms on the Great Lakes are mighty. Powerful winds in these ‘inland seas’ can stir up extremely steep, ocean-like waves.

Cautious of the storm, both ships' captains decided to take a northerly course across Lake Superior, between Isle Royale and the Keweenaw Peninsula. There, the highlands of the Canadian shoreline would protect their vessels from the fierce winds and waves. Later, both ships arced southeast towards the shelter of Whitefish Point. 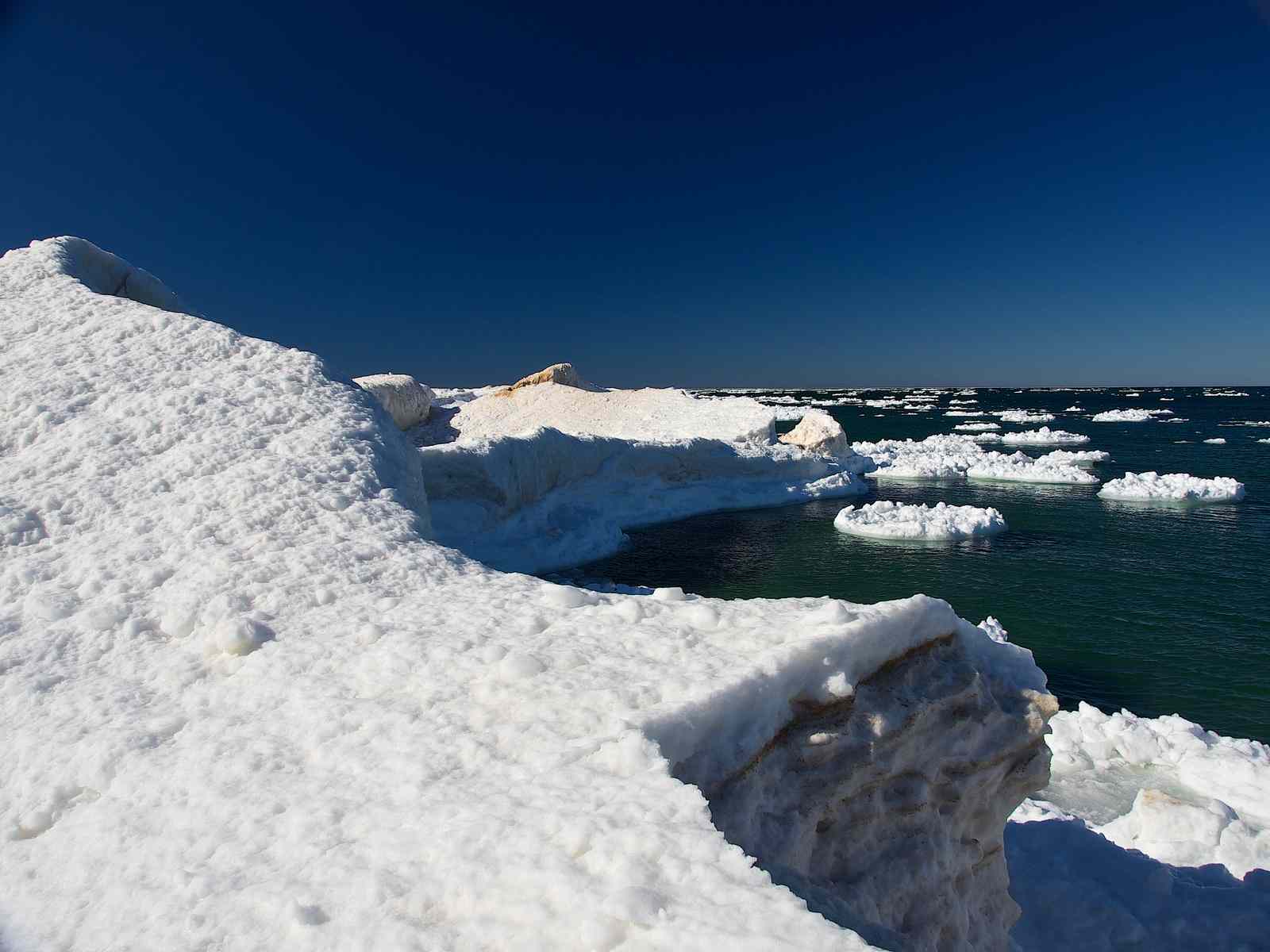 Until this time, winds had been coming from the northeast. Canadian land sheltered the ships from the worst of the storm. However, the tempestuous weather was worsening and the wind changed directions, now blasting in from the northwest. The ships were no longer protected.

By early afternoon, the Fitzgerald and the Anderson were approaching Michipicoten Island. Despite the increasingly violent weather, they passed safely.

It wasn’t long before the Fitzgerald neared Caribou Island with the Anderson in her wake. Captain Cooper recalled that the Fitzgerald came dangerously close to Six Fathom Shoal, a shallow, treacherous bedrock ridge just north of the island. 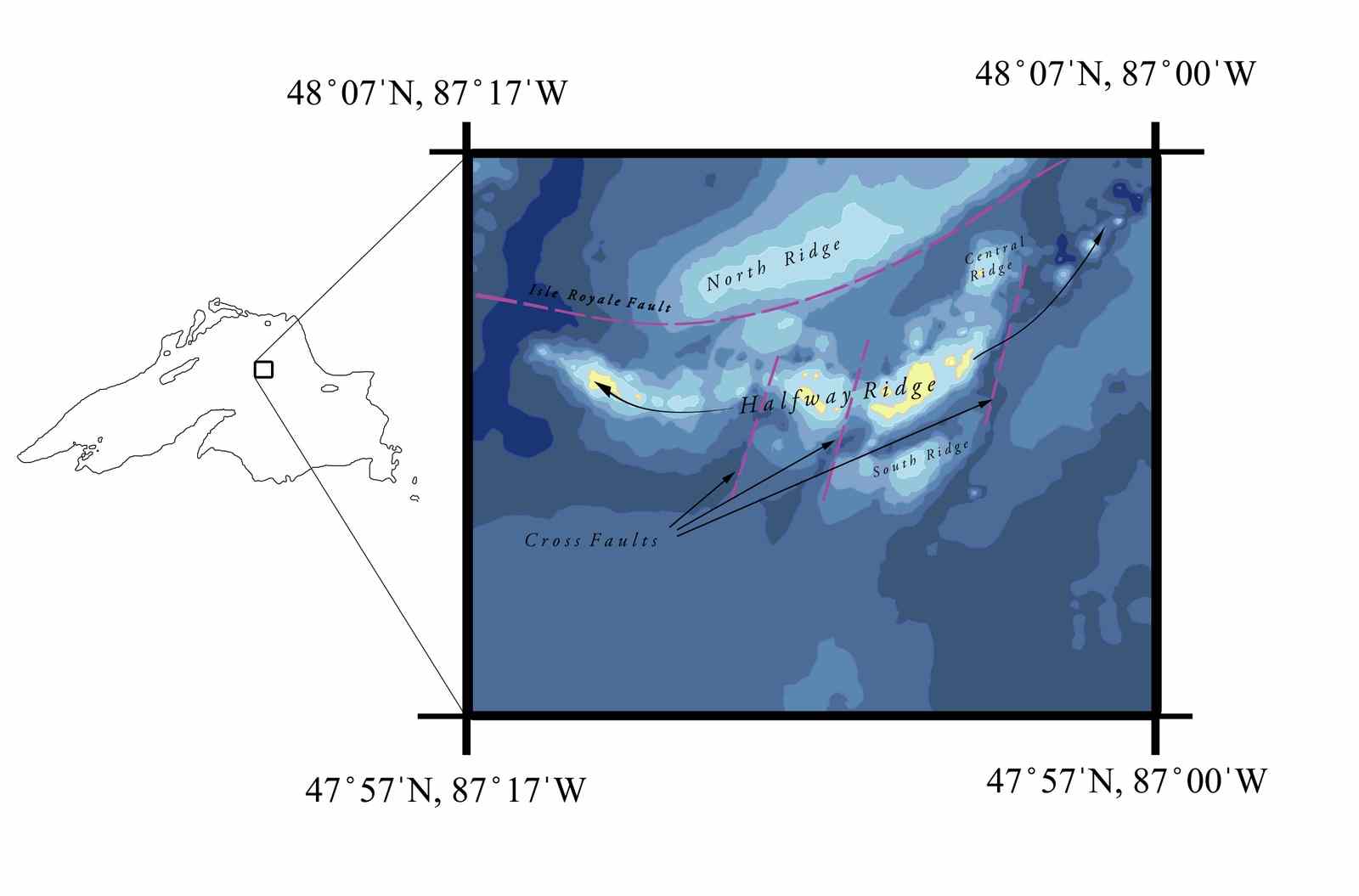 Around 3:30 p.m., Captain McSorley reported damage on his ship. A fence rail was down. Two vents had been lost or damaged. Worst of all, there was an uneven distribution of weight crossways on the vessel. Such an imbalance is often caused by water entering the side compartments of a ship after rough weather or a collision. 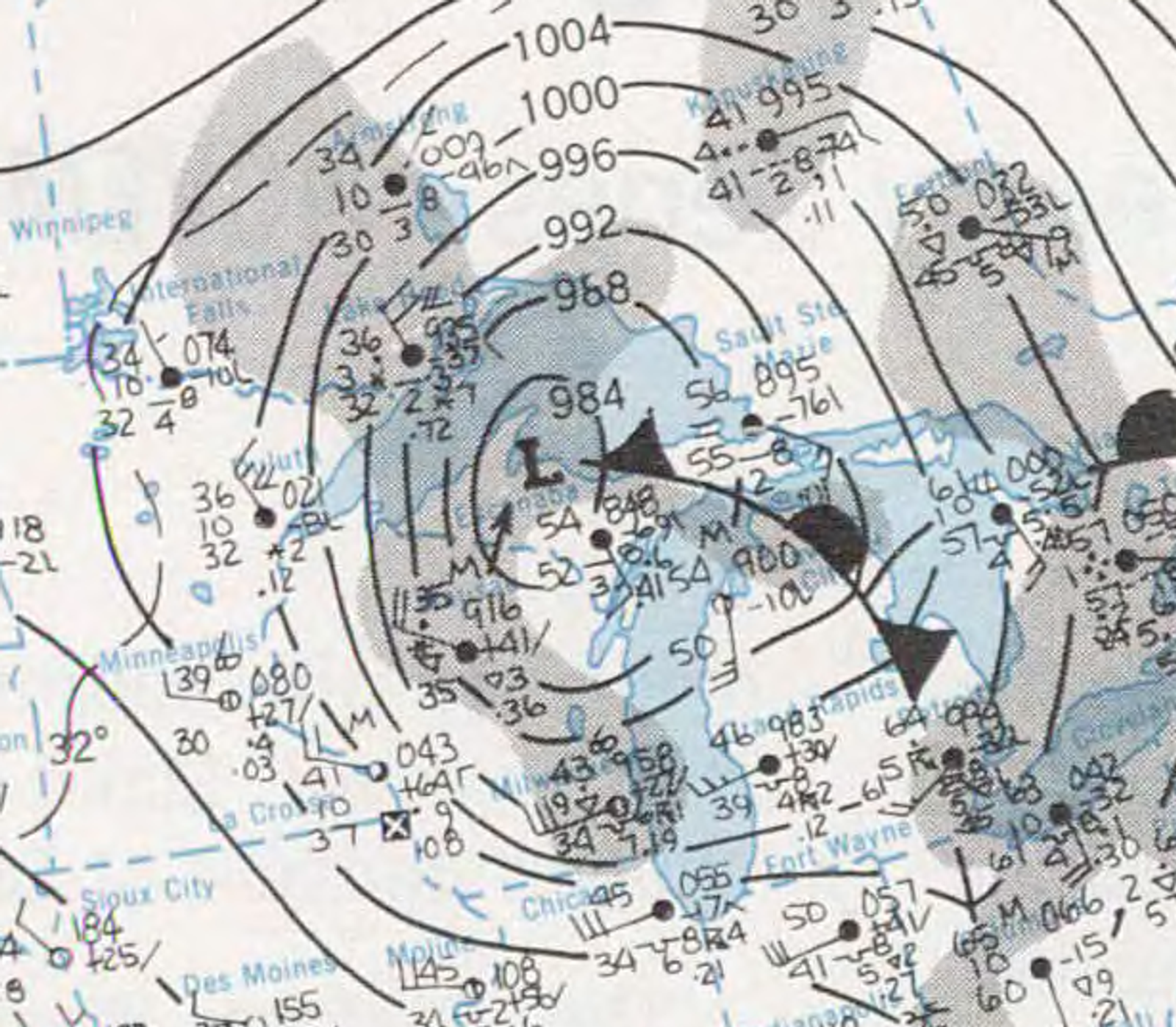 Fortunately, the ship’s pumps were still going, bailing water out of the vessel. Captain McSorley asked Captain Cooper to stay close and help him with radar plots until the ships reached Whitefish.

The two captains stayed in touch throughout the afternoon, sharing navigational information. Captain McSorely never voiced any concern about his ship’s ability to continue the expedition.

By 7:00 p.m., weather conditions had become even more formidable. Waves were crashing upon the Anderson’s deck. The bow of the ship was being pushed forward, beneath Lake Superior’s turbulent surface.

The storm had reached its climax. The Anderson was being thrust about like a toy boat in a bathtub. The Fitzgerald was nowhere to be seen. 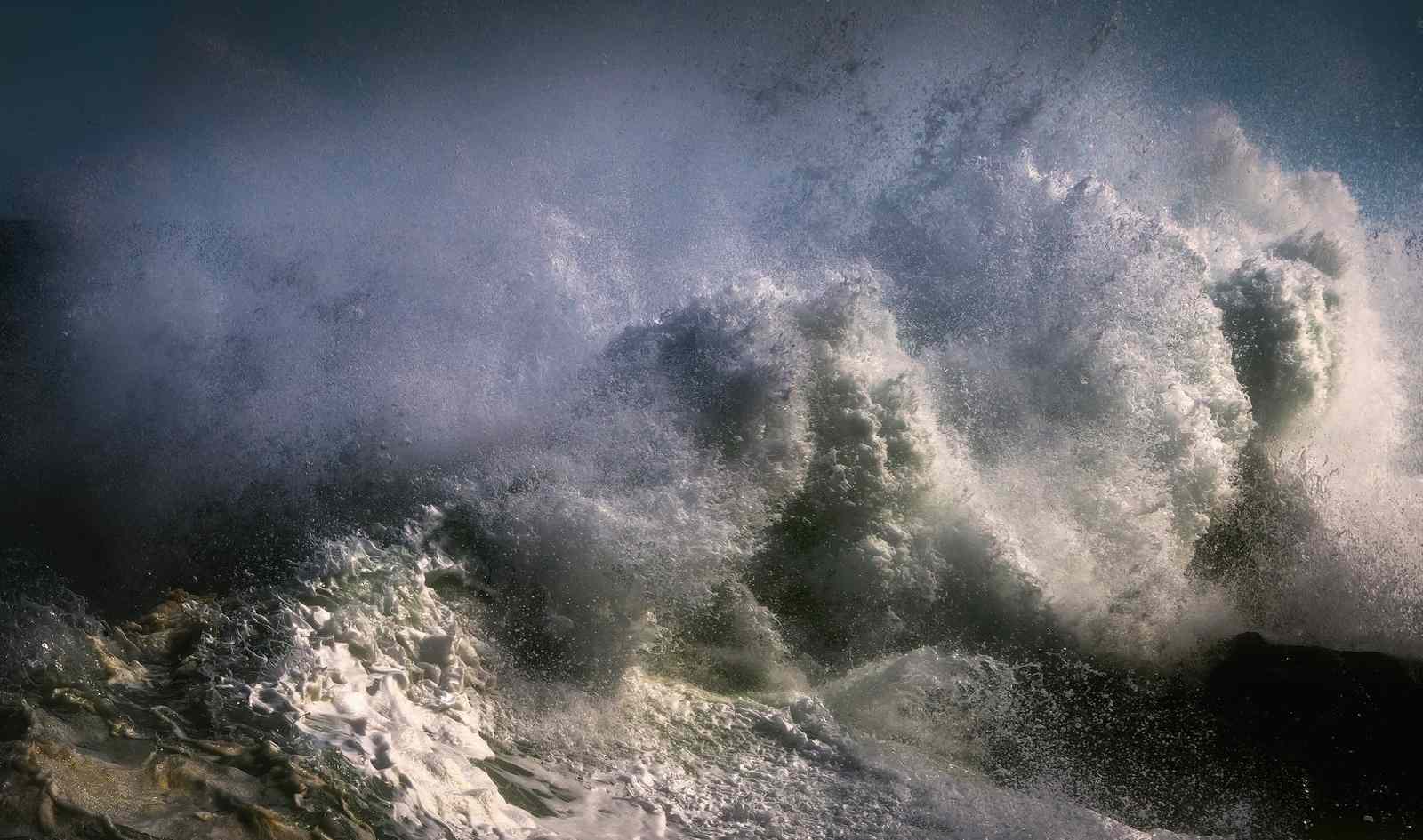 
The Arthur M. Anderson loses contact with the Edmund Fitzgerald

Morgan Clark, the first mate of the Anderson, had been diligently keeping track of the Fitzgerald on his ship’s radar. This was becoming more and more difficult, however.

The immense waves created staggeringly high water levels that disrupted the ships’ sonar systems, and Clark was losing contact with the Fitzgerald periodically.

The final communication between the two ships happened at about 7:10 p.m.

Captain McSorley's last message was, "We are holding our own.” Clark signed off, “Okay, fine, I’ll be talking to you later.”

The Fitzgerald sent no distress signals before sinking. By 7:15 p.m., the ship’s radio signal was lost. It did not return. Clark called the Fitzgerald at 7:22 p.m., but there was no answer. 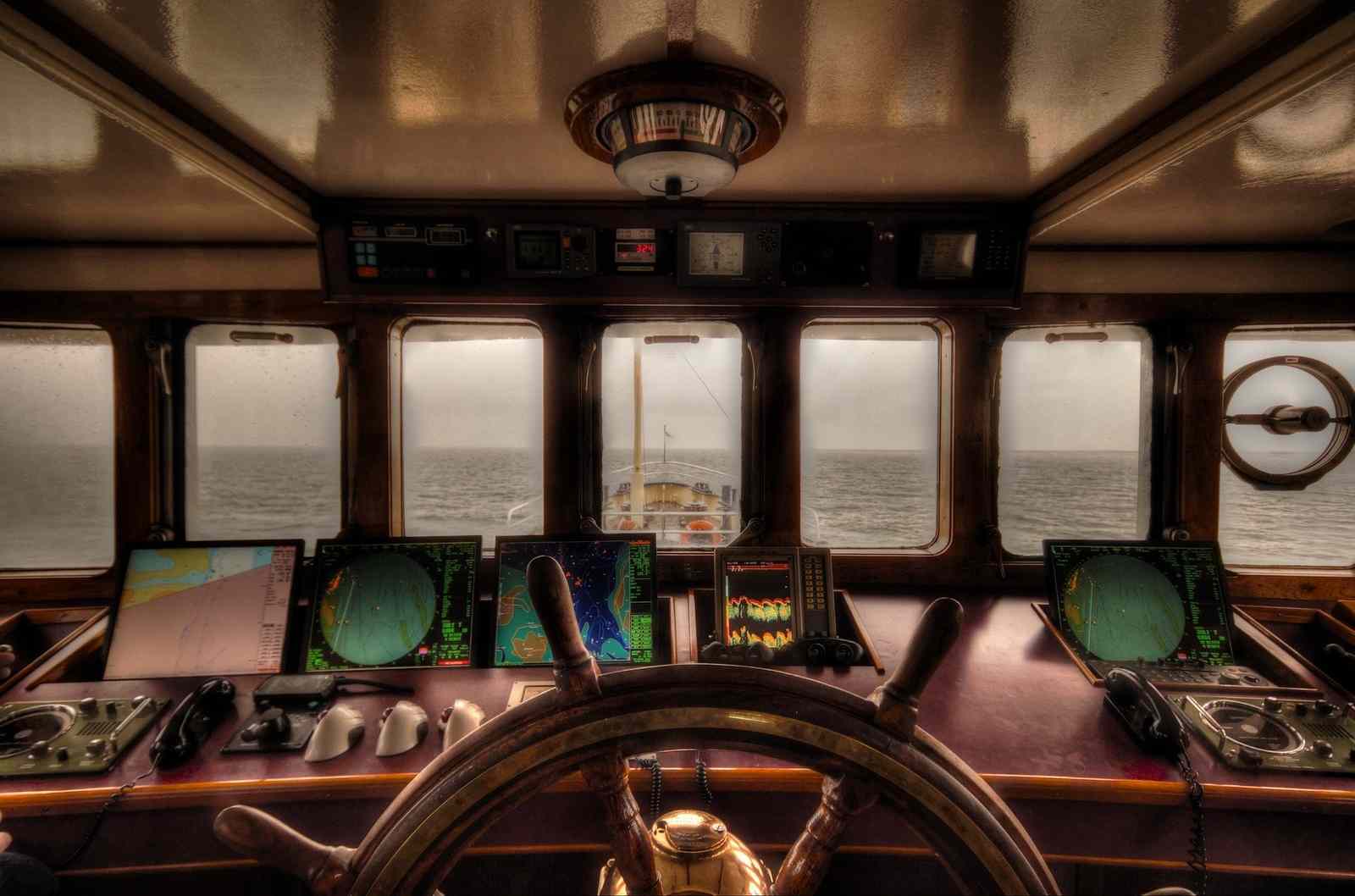 
Looking for the Edmund Fitzgerald

The wind and waves raged on.

Captain Cooper, now safely in Whitefish Bay, felt uneasy after the break in communication with the Fitzgerald. Sensing that something was wrong, he called the United States Coast Guard in Sault Ste. Marie, Michigan. He requested that they commence a search for the missing ship.

The storm was keeping the Coast Guard busy. Their communication systems had been affected by the powerful gusts, and they were having trouble locating a different overdue boat. 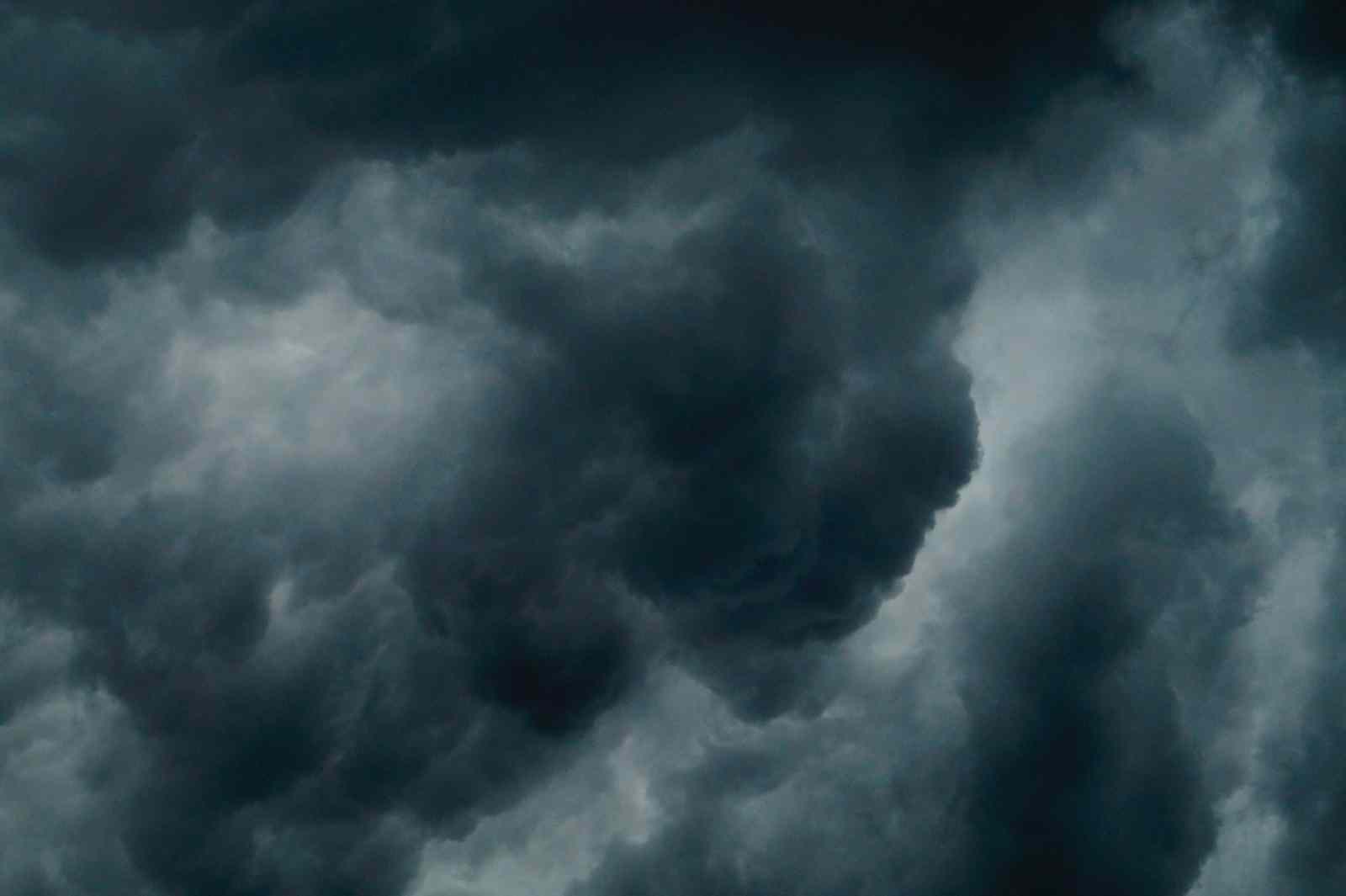 The Coast Guard was reluctant to search for the Fitzgerald. They asked Captain Cooper if he would be willing to take the Anderson back out from the shelter of Whitefish Bay to look for the missing ship. There was much back and forth between Captain Cooper and the Coast Guard.

“Well, I’ll go back and take a look, but God, I’m afraid I’ll take a hell of a beating out there. You realize what the conditions out there are, don’t you?”


Guided by his conscience, Captain Cooper bravely ventured back out into the storm, risking his own safety, to find the ship and its crew. He was too late.

Captain Cooper and the Anderson’s crew came across two of the Fitzgerald’s lifeboats, some oars, lifejackets, gas tanks, and wooden debris, but nothing else. The lifeboats were in bad shape, suggesting that the ship had sunk very quickly. The crew likely never had a chance to leave. 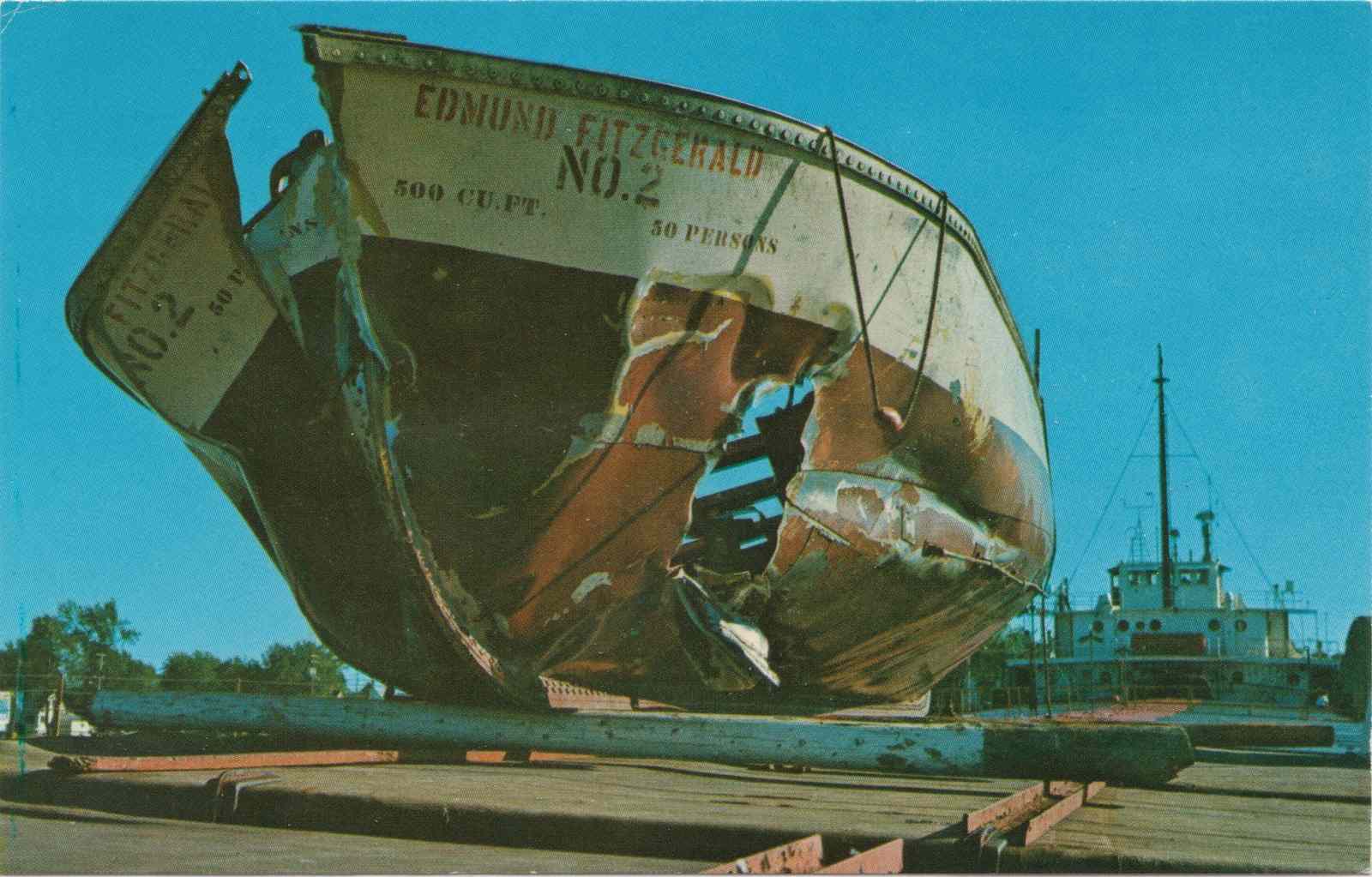 Well over an hour later, other ships in the area (and finally, the Coast Guard) joined the search, but no survivors were ever found.

In the days that followed, the Coast Guard searched the area thoroughly.

A U.S. Navy Plane was even sent to scan the lake for the ship. The plane used a magnetic anomaly detector, making strong contact with something about 23 kilometers north-northwest of Whitefish Point, but it wasn’t until spring that the true fate of the Fitzgerald was determined.

After ongoing search efforts, the ship was discovered on May 20, 1976. The wreck was found resting about 160 meters below Superior’s surface, upside down on the bottom of the lake. It was 27 kilometers from Whitefish Bay, near Sault Ste. Marie. 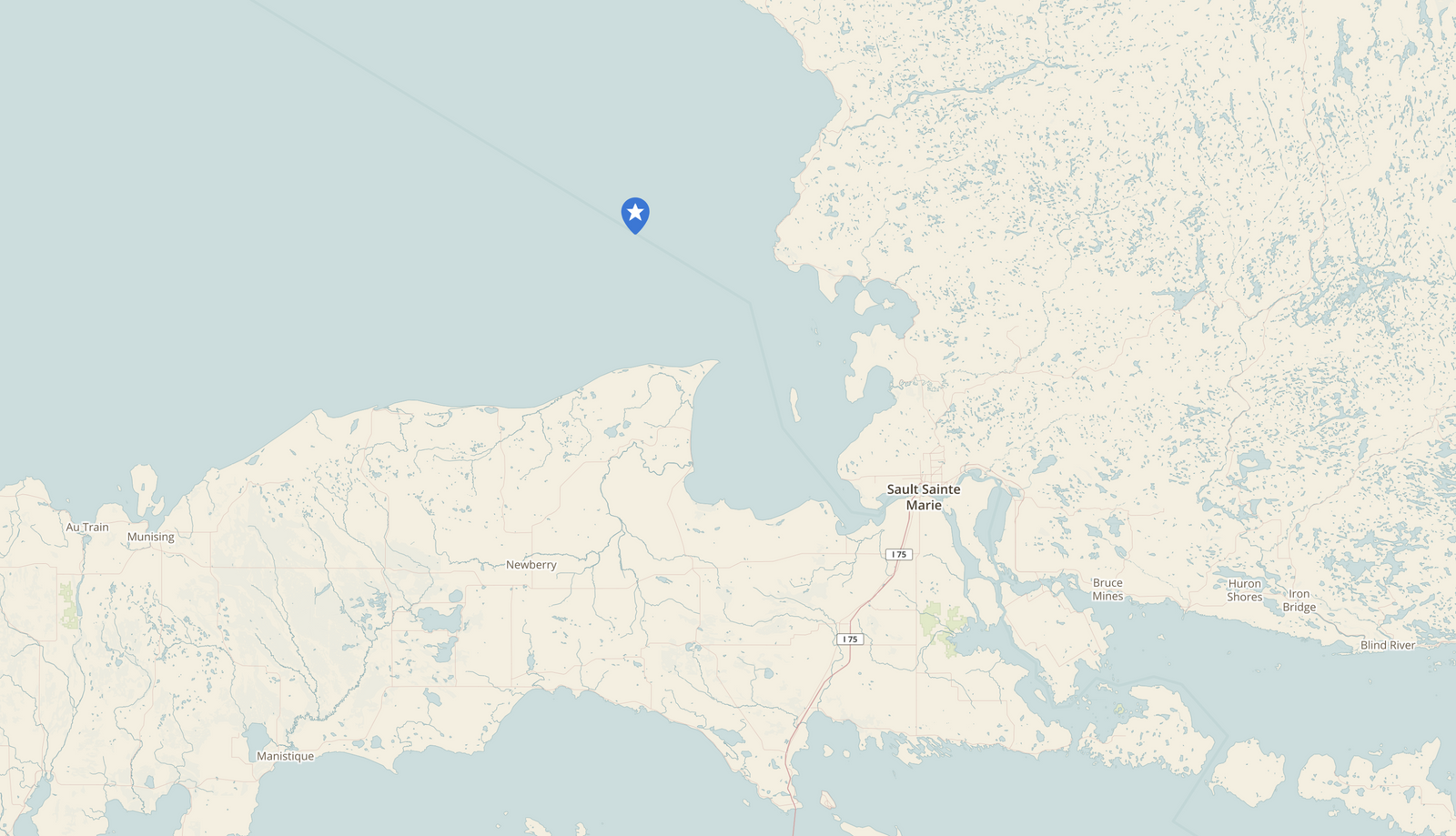 The location of the Edmund Fitzgerald shipwreck.


Why did the Edmund Fitzgerald sink?

To this day, no conclusive cause for the shipwreck has been found.

Even the shipwreck’s official report could not determine a definite cause. The report suggested that, most likely, the ship sank because its cargo hold flooded when a hatch wasn’t closed properly. This would have caused the vessel to lose its buoyancy and stability, and eventually sink.

The Lake Carriers Association disagreed, proposing that the Six Fathom Shoal was the Fitzgerald’s undoing. Captain Cooper, too, had always maintained that Captain McSorley knew his ship was compromised on the shoal, but had faith that his ship would make it to Whitefish Bay. 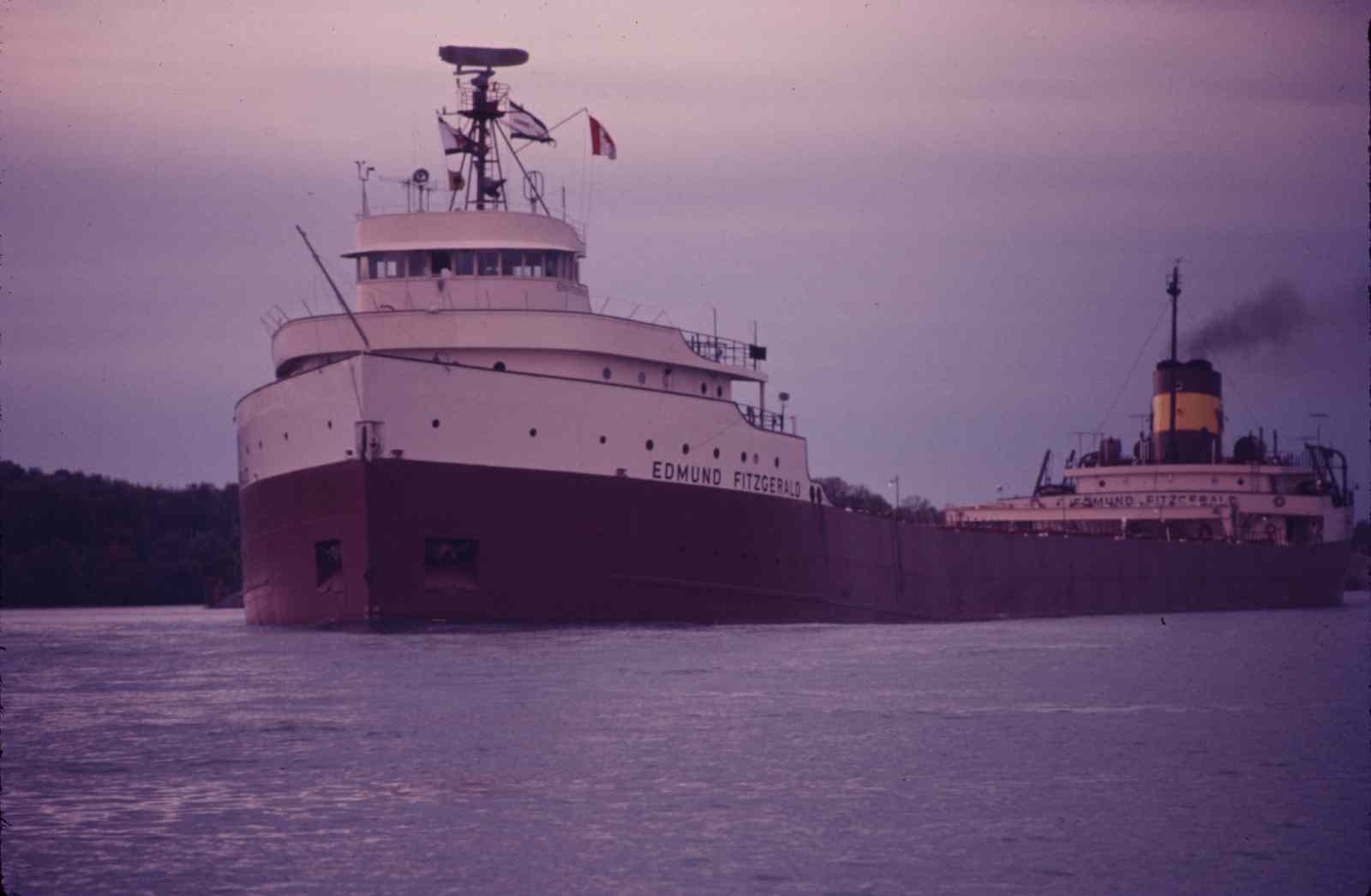 Captain Cooper believed that the shipwreck must have been “sudden and catastrophic.” He concluded that the crew must have thought they were just going under a big wave right before being submerged and disappearing completely.

Although the Anderson was put on a long-term delay in 2017, as of July 2019 the celebrated ship is back in service.

Other theories posit that the Fitzgerald was ripped in half, the stern was twisted off, and the ship was abruptly pushed underwater by waves. The position of the ship indicates that it nosedived, impacting the bottom of the lake with great force.

Some maritime experts and naval architects suggest that the Fitzgerald hit the bottom at about 35 miles an hour. 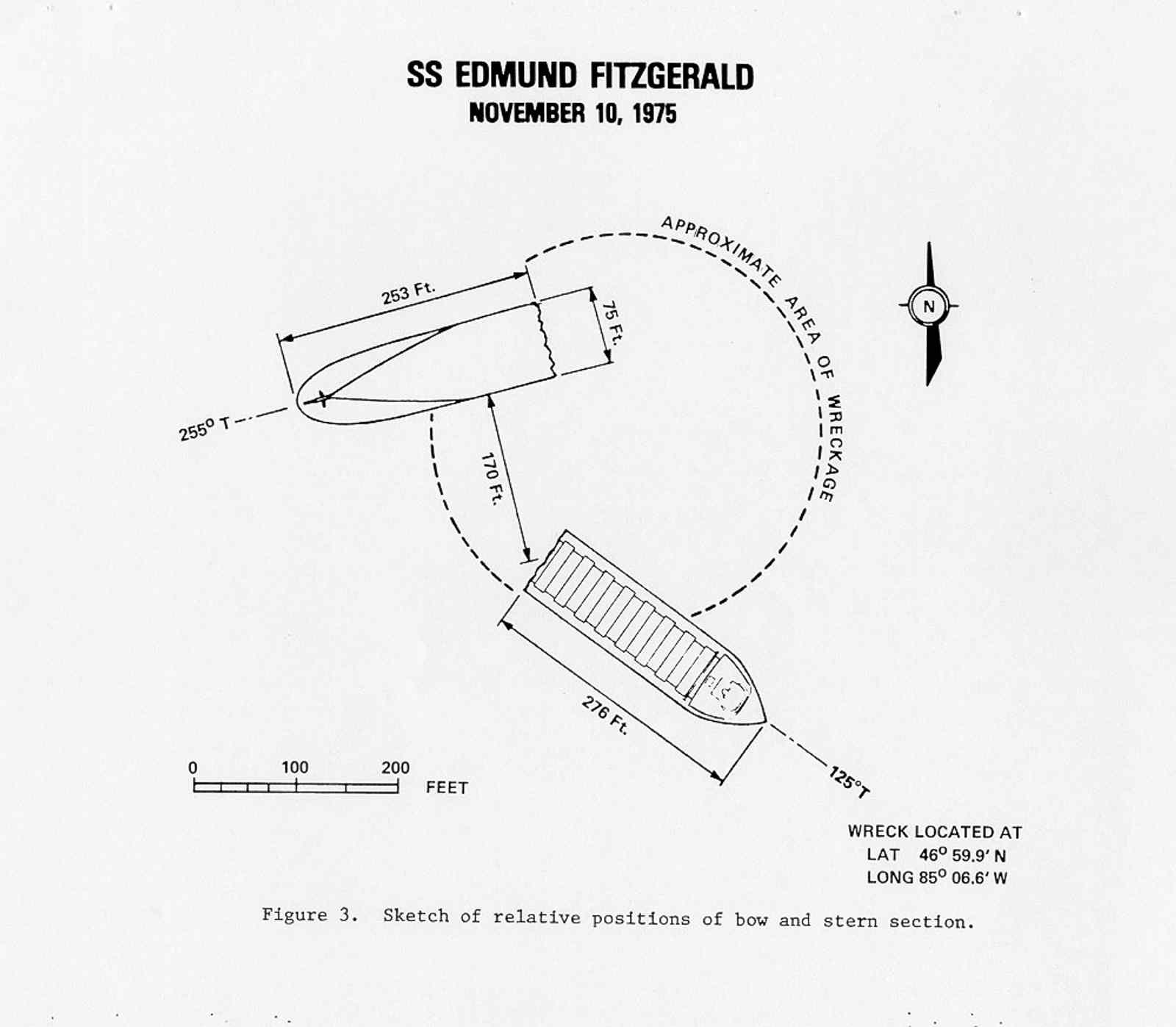 Sketch of the relative positions of the bow section to the stern section of the Edmund Fitzgerald. Photo Credit: NTSB (Wikimedia Commons: Link)

Today, you can see the Fitzgerald’s bell in the Great Lakes Shipwreck Museum, located at the Whitefish Point Light Station in Michigan’s Upper Peninsula.

If you’d like to pay tribute to the ship, you can visit the Split Rock Lighthouse southwest of Silver Bay on Lake Superior’s north shore on November 10. Every year on the anniversary of the Fitzgerald’s sinking, the lighthouse emits a light in the ship’s memory. 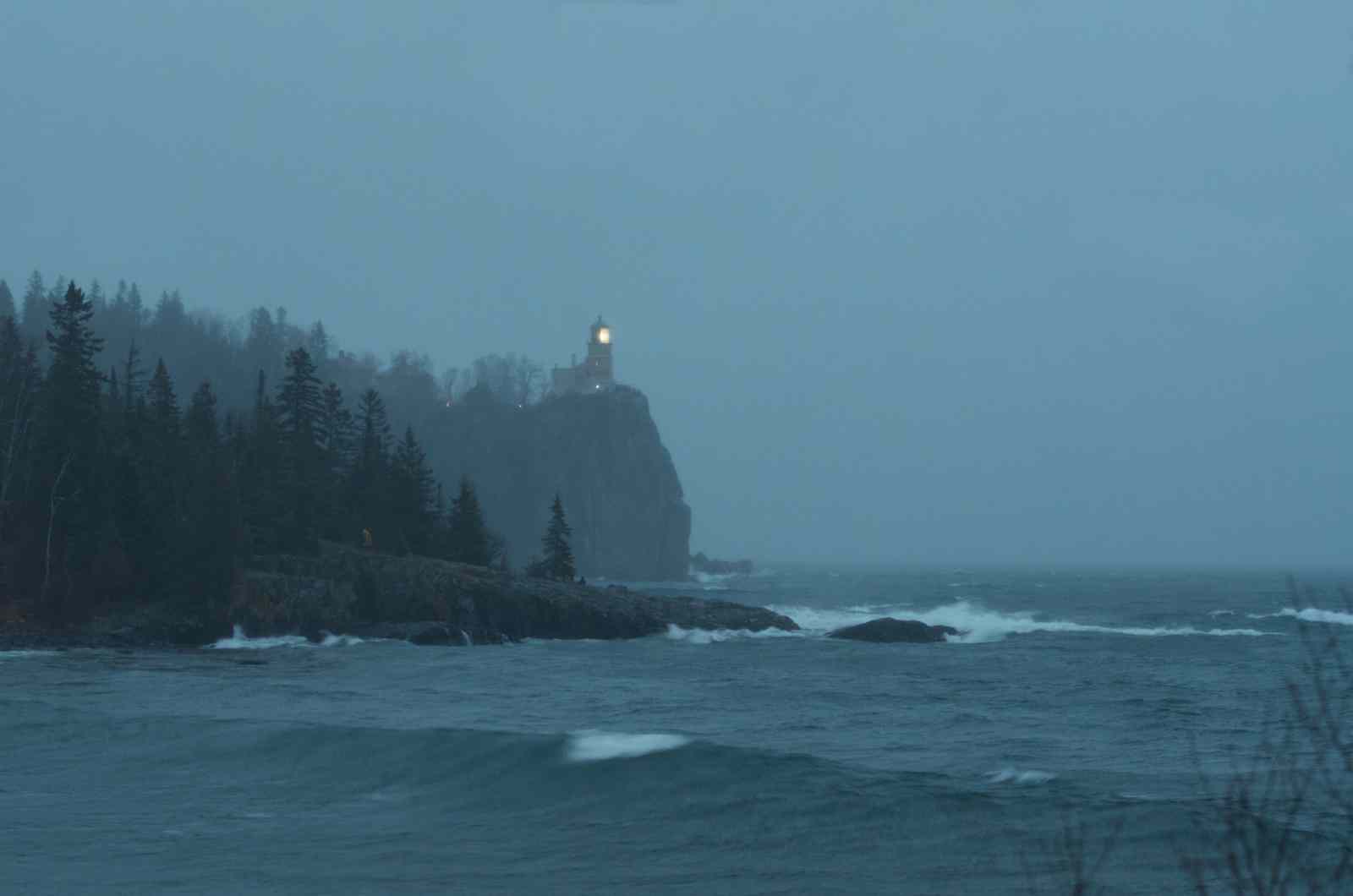