Scaly, slithery, cold-blooded snakes and other reptiles can be found in or around waterbodies in the Great Lakes region. The word reptile comes from the Latin word ‘rept,’ meaning ‘to creep.’ Indeed, many people do think they’re a bit creepy.

But look a little closer! Admire the flowing movements of a snake skimming across the surface of a river. Appreciate the determined journey of a turtle propelling itself forward through the wild waters of a Great Lake

Here are five common Great Lakes reptiles that you might spot in your nearby waterbody. 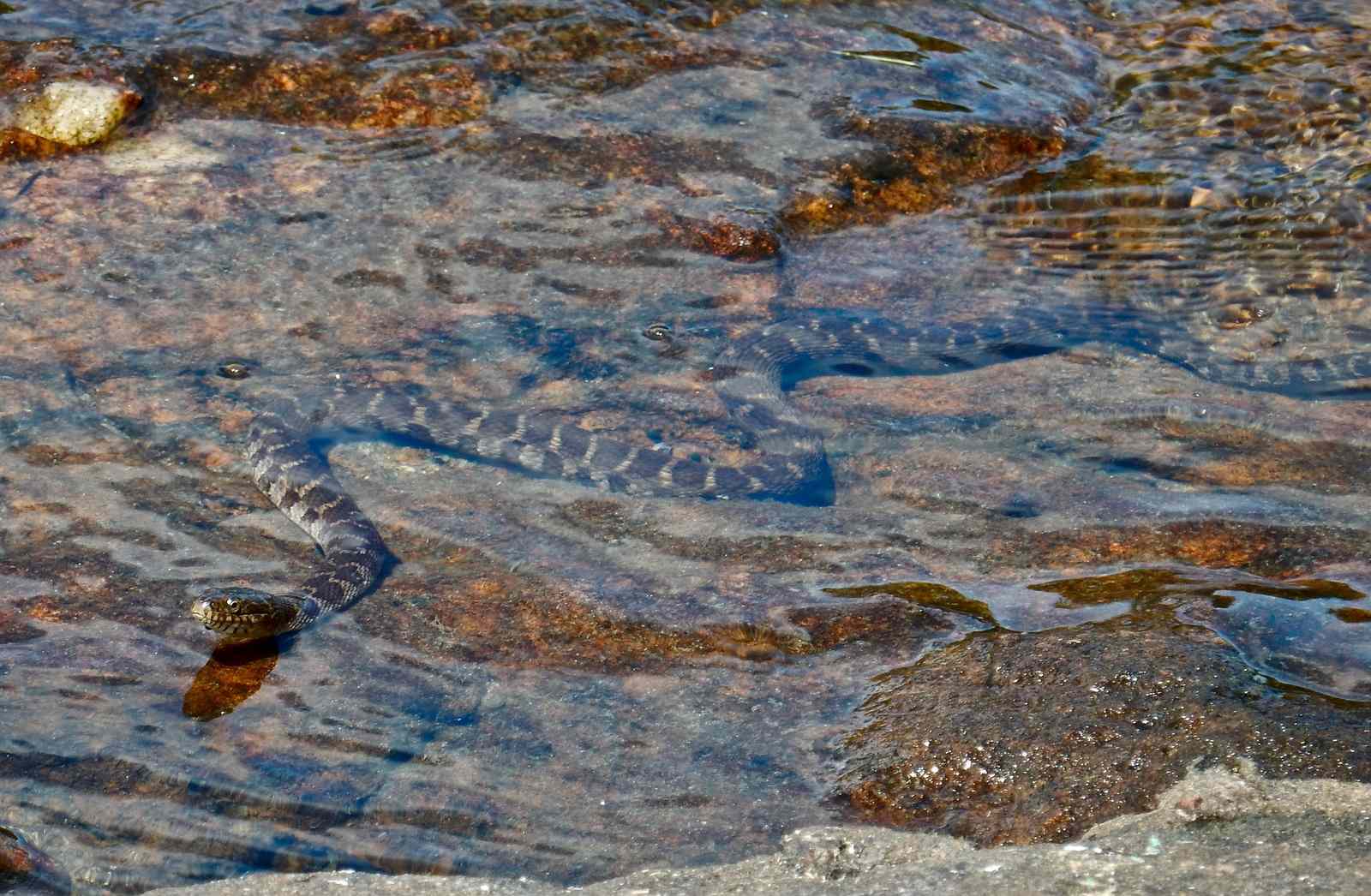 Northern Watersnakes are often sleek black, grey, or deep brown with faint horizontal banding. Most reach a length of about 60 to 110 centimeters, though some may grow larger.

These snakes can be found in rivers, wetlands and lakes, usually among vegetation or on rocks and logs. Sometimes, they can even be spotted hiding among the sticks of beaver lodges. 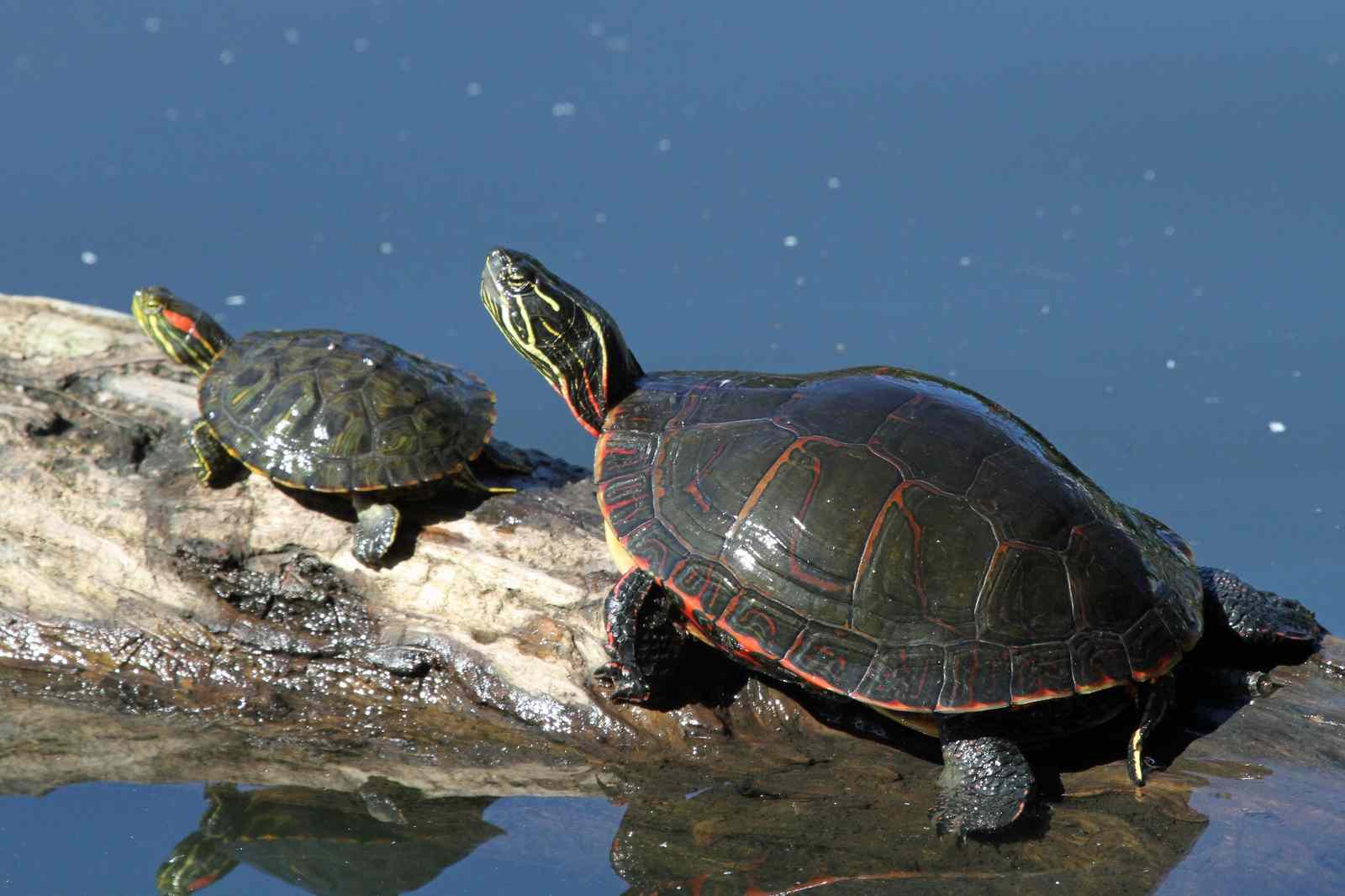 Painted Turtles are not too flashy viewed from above, with their olive or black upper shells. However, these turtles take their name from the vivid yellow or red edges of their lower shells and striped necks, legs, and tails.

Painted Turtles inhabit ponds, creeks, rivers, wetlands, and lakes. They prefer slow-moving water and sheltered bays with ample vegetation to munch on. Look for these turtles sunbathing on rocks and logs. 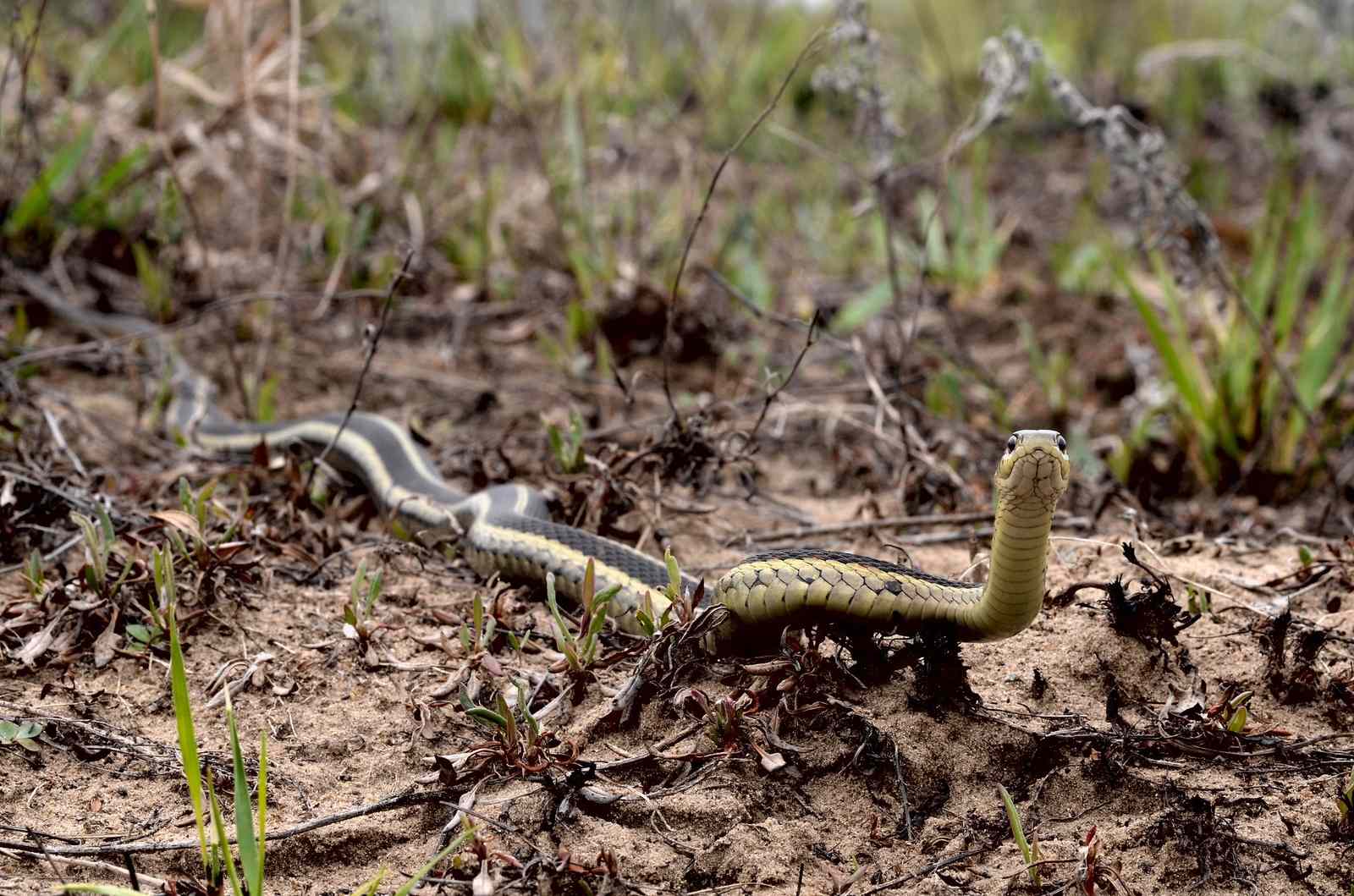 Eastern Gartersnakes are one of the most common snakes in all of North America.

They usually have dark green or black patterning with three yellow stripes on their back and two sides, but their colours and patterns can vary. On Pelee Island, Eastern Gartersnakes may be melanistic, meaning they have black backs and no stripes).

Eastern Gartersnakes are harmless (unless you’re a small fish, frog, toad, salamander, or mouse). Look for these snakes in parks, fields, wetlands, forests, rocky areas, or even urban landscapes. 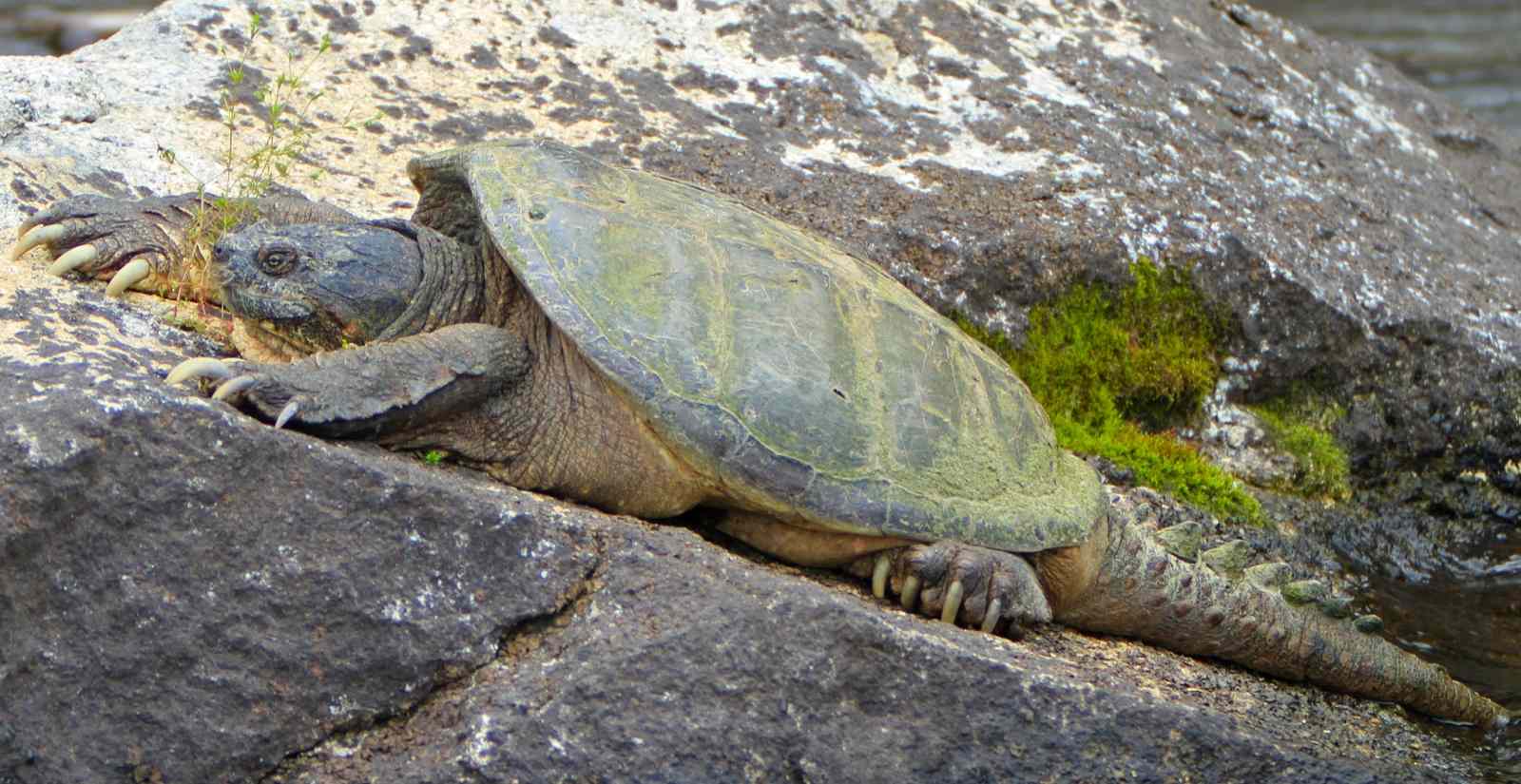 At first glance, Snapping Turtles can look almost prehistoric. With their coarse, sometimes algae-covered shells, big jaws, and long spiked tails, they don’t quite look like they’re of our time.

They are the largest freshwater turtle species in Canada, and their shells can grow up to 50 centimeters long and weigh up to 35.3 pounds.

Snapping Turtles can be found in almost any freshwater habitat, but they particularly like slow-moving water with soft muddy or sandy bottoms.

These turtles are almost always more curious than combative when it comes to meeting humans, but “Snapping” Turtle is not a misnomer! If you cross paths with one, keep a respectful distance. 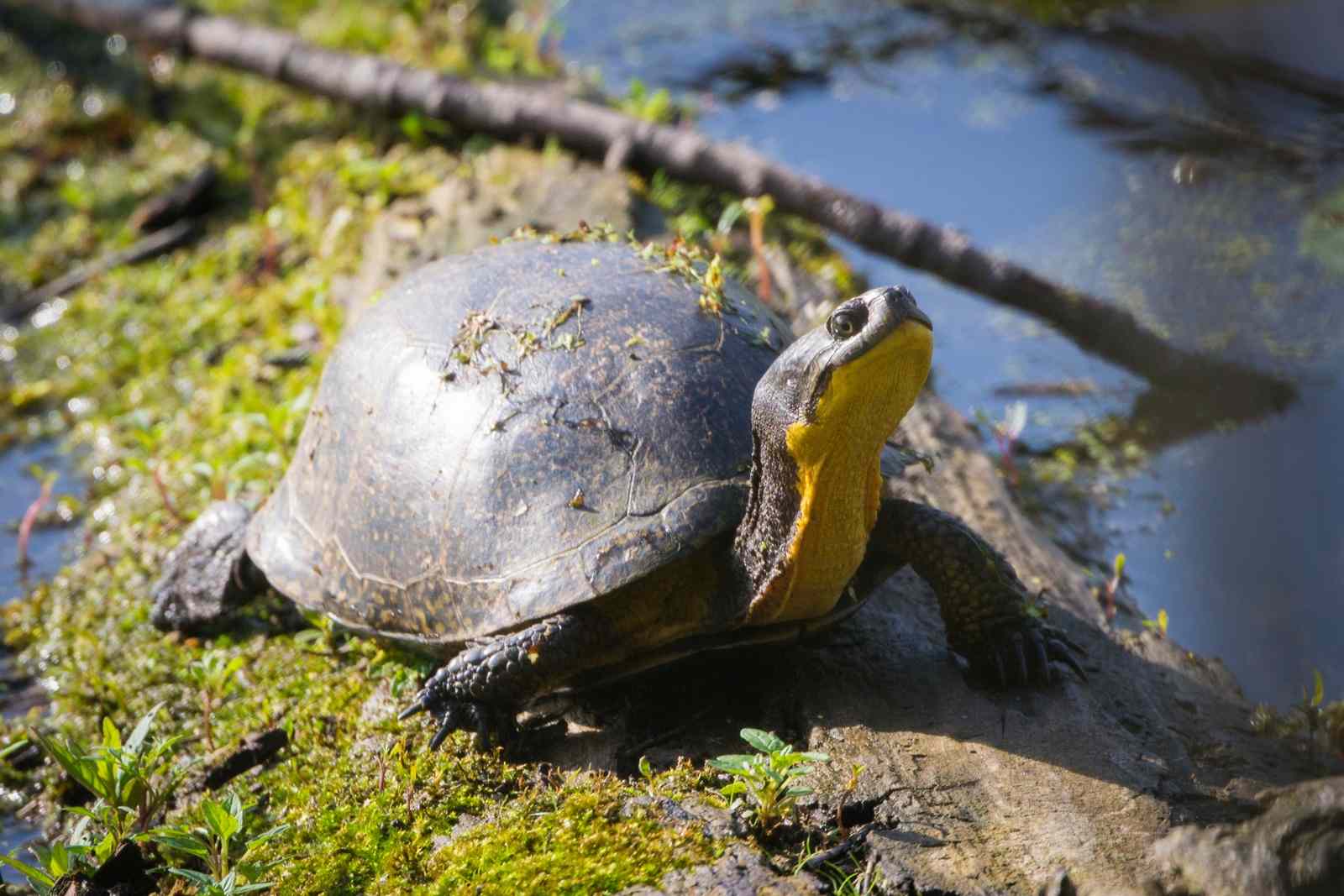 Blanding’s Turtles can be recognized by their smooth, domed, black upper shells and bright yellow chins and throats. These turtles show few (if any) signs of aging, and may live to be up to 80 years old! They are even studied by scientists doing longevity research.

Wetlands are diminishing, however, and Blanding’s Turtles have become endangered as a result. Cars are also responsible for Blanding’s Turtle deaths, so if you’re by the water, drive carefully and watch out for crossing turtles.

There are so many different types of reptiles you might find around the Great Lakes.

One surefire way to see a Northern Watersnake or Eastern Garter Snake is to visit Main Duck Island: snake paradise. When you're scoping the shore for reptiles, always keep an eye out for sunny logs and rocks in particular. You just might see one of these cold-blooded creatures warming up!

Other 'spot these' articles on Great Lakes Guide

Spot these five fish in the Great Lakes

Spot these five frogs in the Great Lakes

Spot these five waterfowl in the Great Lakes