Robert grew up in Etobicoke and Mississauga, Ontario. Today, he lives and works downtown as a civil litigation lawyer. Swimming was a big part of his childhood although he didn’t start marathon open water swimming until later on in life. Rob always liked being in the water, taking swimming lessons, and going to swimming pools growing up.

For Robert, open water swimming was a definite step up from swimming in a pool, but he longed for something even more challenging, something a little longer, something with harder conditions. He wanted a challenge. And so, by his mid thirties he had begun open water marathon swimming. 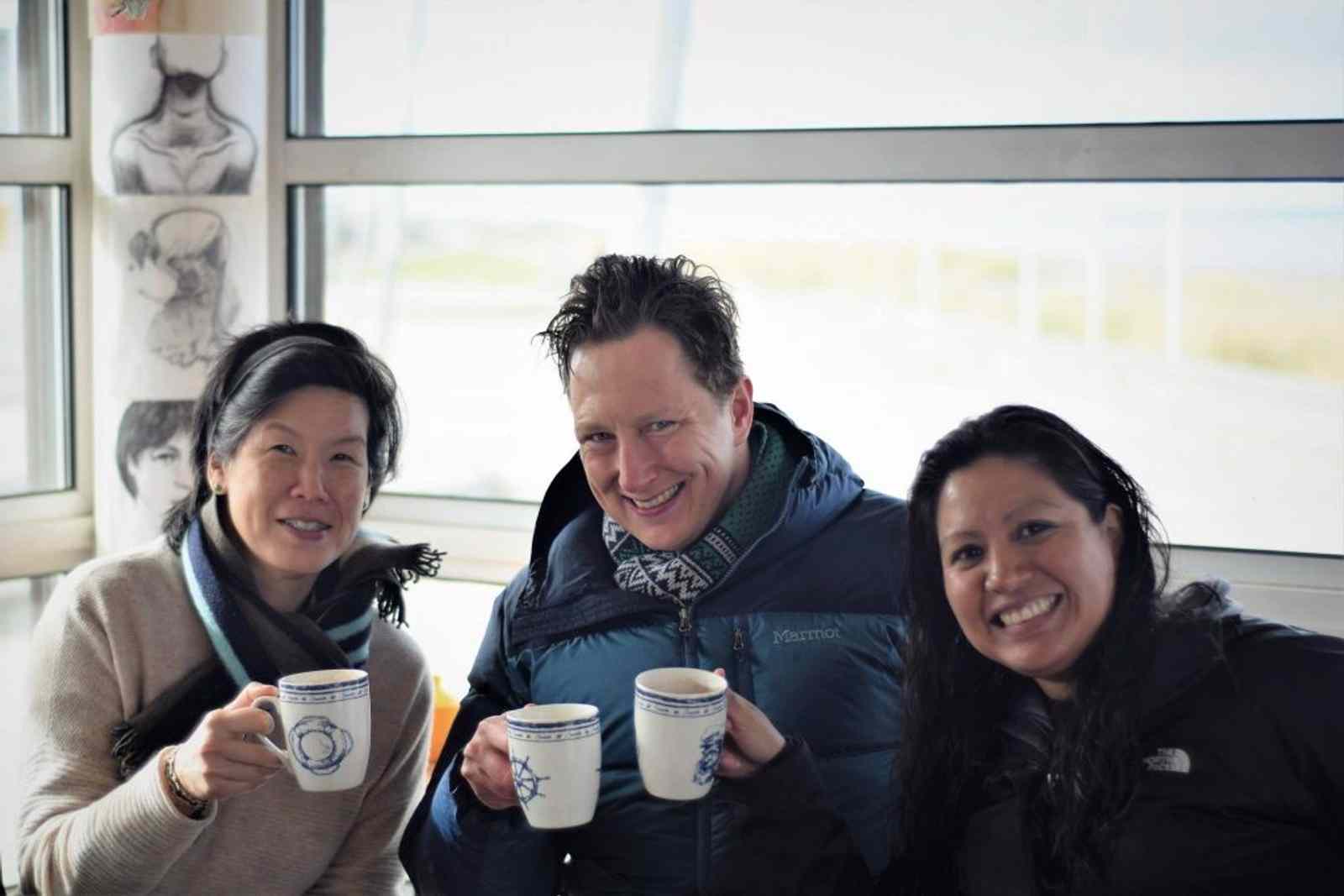 
Connecting with the natural world

Nothing beats the call of the open water. Open water swimming has become a way for Robert to connect with his environment. He finds it freeing to swim outside and exciting to be so immersed in nature.

In wild waters, you feel and experience everything. During his swim of Lake Geneva, Robert was able to notice how the waves, water temperature, and weather conditions shifted over the course of the day. The weather was wonderful in the daytime, but at night, temperatures dropped. The waves changed, and the rain came.

In the Straits of Magellan, Robert encountered a whirlpool and had to fight hard to avoid being sucked under the water. Similarly, in Lake Titicaca, Robert had to struggle for breath throughout the crossing because of the altitude and lack of oxygen. 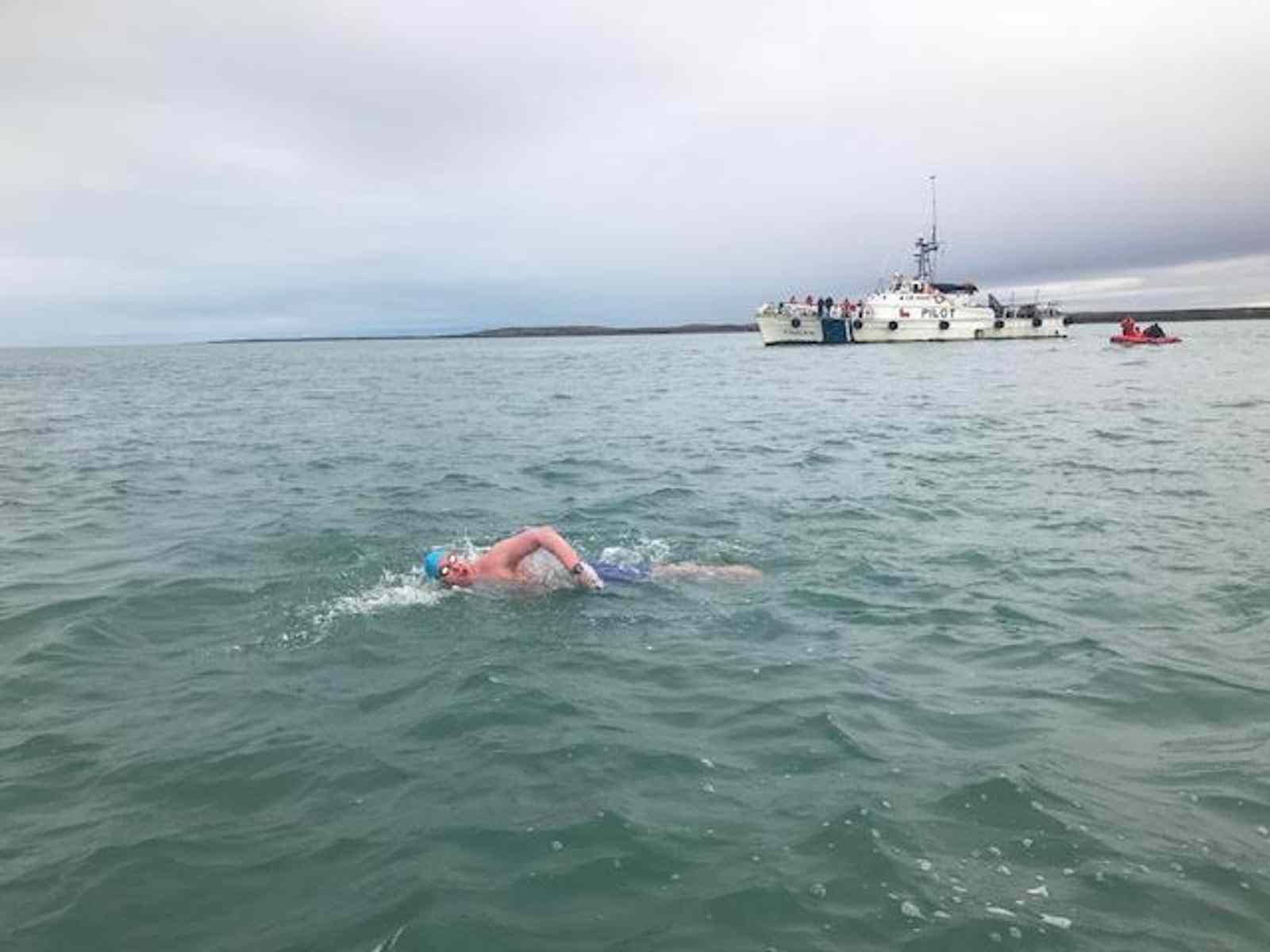 Robert McGlashan swimming the Strait of Magellan on April 1, 2019.

Waterbodies create unpredictable and challenging conditions, but this is precisely why Robert loves swimming in them.

Open water swimming gives you more than just a newfound respect for the elements. While completing his swim of the Strait of Magellan, Robert was accompanied by a pod of curious dolphins who followed him for a while as he swam. The great outdoors presents both challenges and splendor that you can’t find in an indoor pool.

The first time Robert swam the Strait of Magellan in Chile, he did it simply to see if he could. He completed this 3.9-kilometer swim, known for its wind, waves, and cold water, in just over an hour, and in 5-6°C water.

Soon, Robert hopes to complete a double crossing of the Strait of Magellan. No one has attempted this incredible feat yet. If Robert does it, he will be the first. 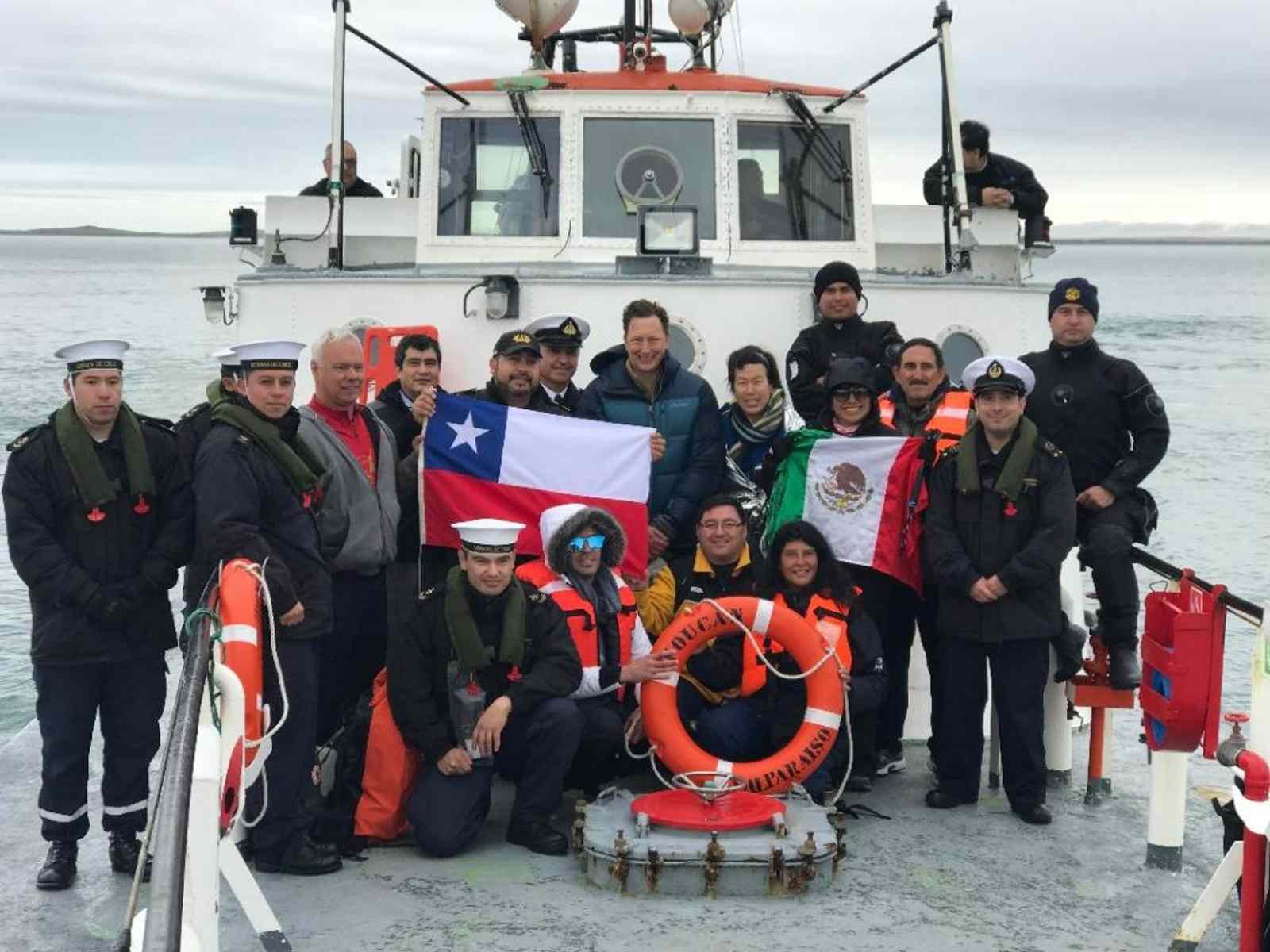 Robert with the Chilean Navy after swimming the Straits of Magellan on April 1, 2019.

While in Punta Arenas to swim the Strait of Magellan, Robert came across the statue of Ferdinand Magellan, a Portugese explorer. As the tradition goes, touching the statue is good luck. Before embarking on his swim, Robert felt like he could use some luck, so he approached the statue.

An impulse overtook him, and instead of merely touching the statue, he kissed its foot. Kissing the foot of the statue means that a person is destined to return. Needless to say, the double crossing of the Strait of Magellan is next up on Robert’s list of swims to complete, and he should be back to the Magellan Shrine soon. 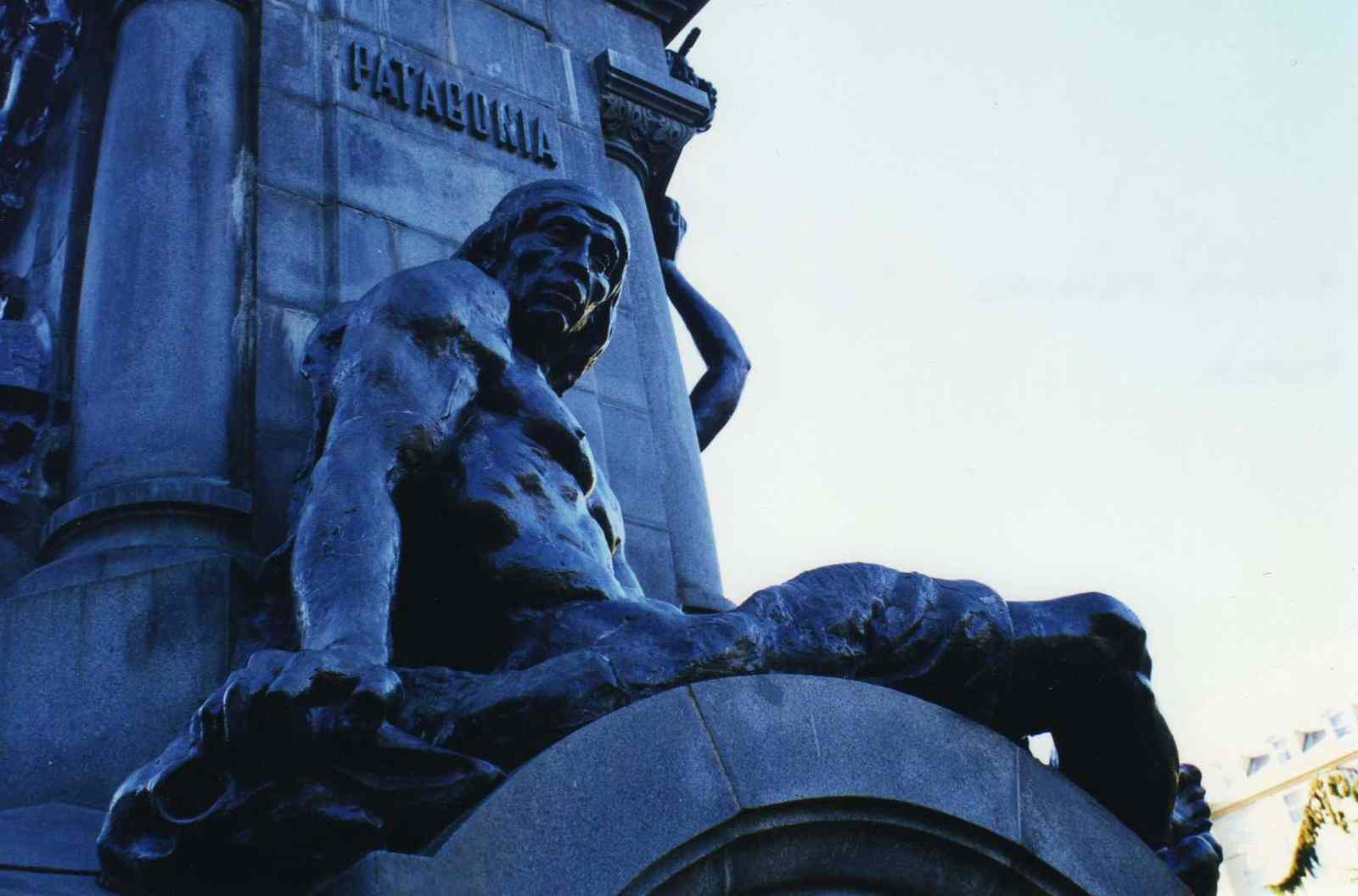 Robert has swum all over the world, from Alcatraz Island, to Lake Geneva, to Lake Titicaca. Picking a favourite swim is an impossible task, but the Strait of Magellan, Lake Titicaca, and the Bonifacio Channel all rank highly. One of the things he loves most about his swims is how different they all are from one another, with each being rewarding in its own way.

“Each body of water has its own beauty and challenge, and the people at each of the locations bring more charm and excitement to the journey.” 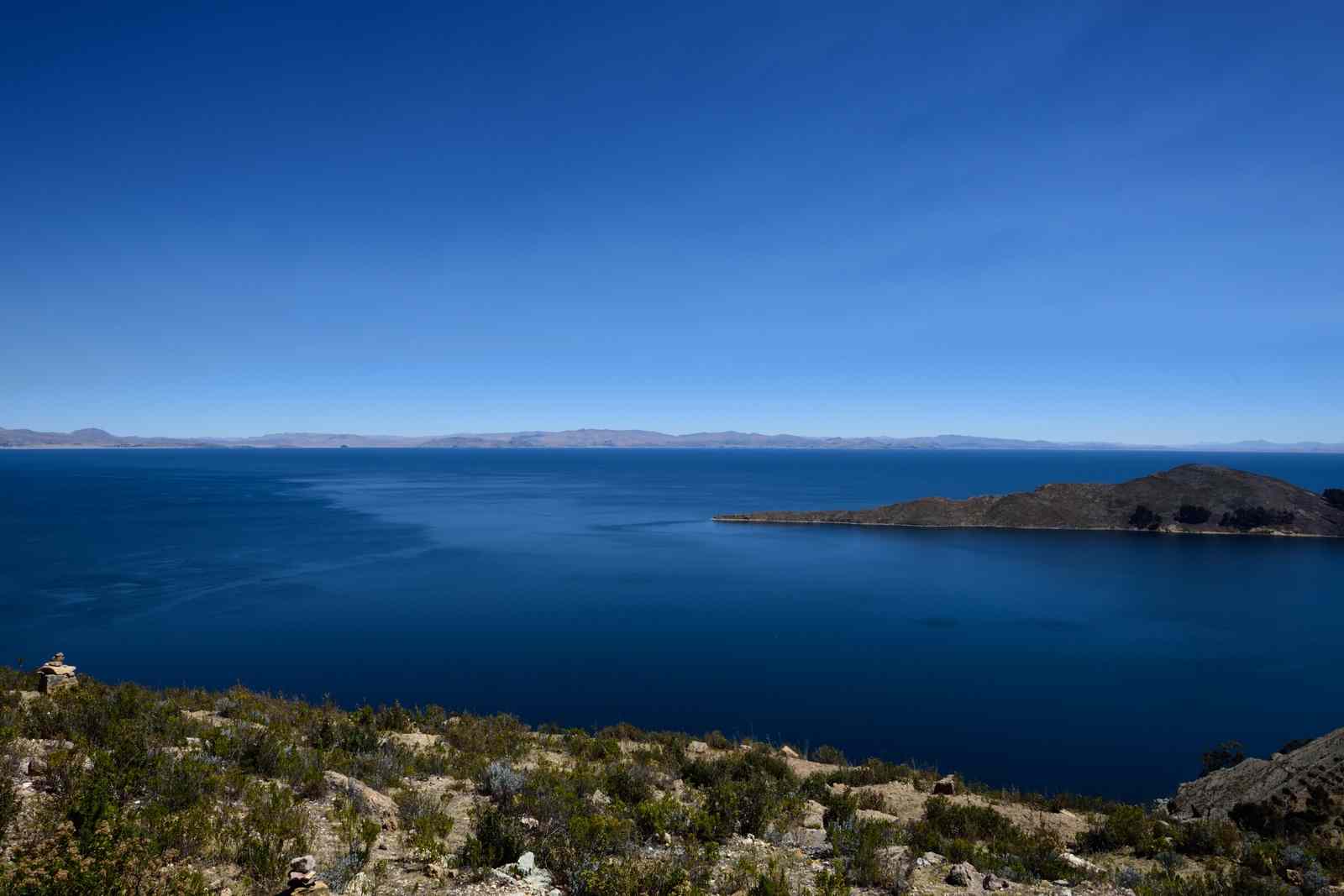 This year, Robert hopes to cross the English Channel and complete a swim around Manhattan. Also on his list? Swimming around Angel Island in San Francisco. One day, he’d even like to join the ranks of the brave swimmers who’ve made the trip all the way across Lake Ontario.

In each country he has visited, Robert has embraced local culture.

Robert visited the witchcraft markets in Bolivia when he swam Lake Titicaca, and he embraced the Dolce Vita in Italy when he swam from Naples to Capri and crossed the Bonifacio Channel from Sardinia to Corsica. 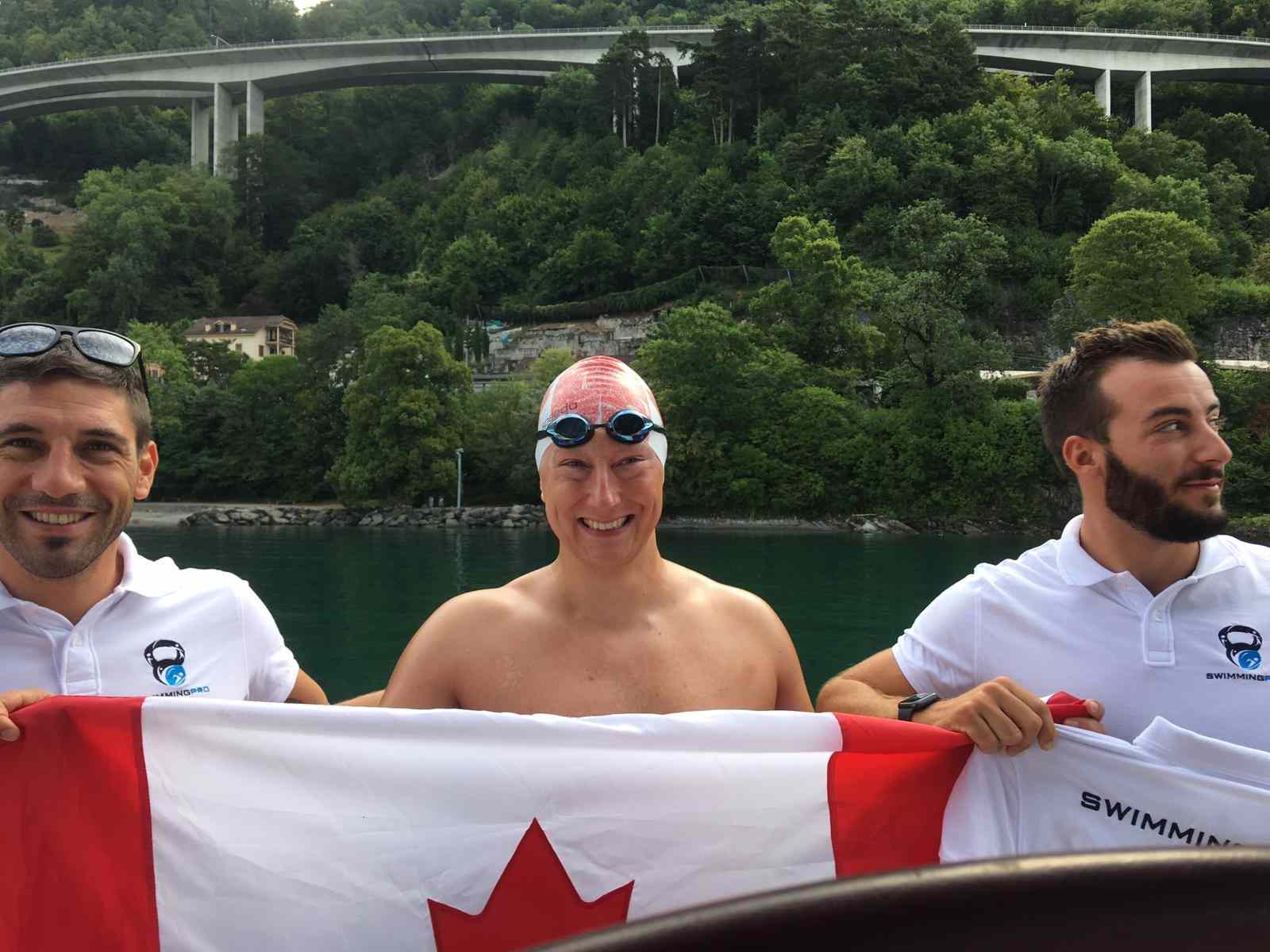 Robert McGlashan before his Lake Geneva Swim in August 2019.

Robert is especially impressed by the way cities that are located on large bodies of water view their waterbodies. They see them as focal points. These waters are where they congregate and where they centre their leisure activities. Robert feels that this connection to the water is a crucial part of people being excited about their water and being motivated to maintain it. 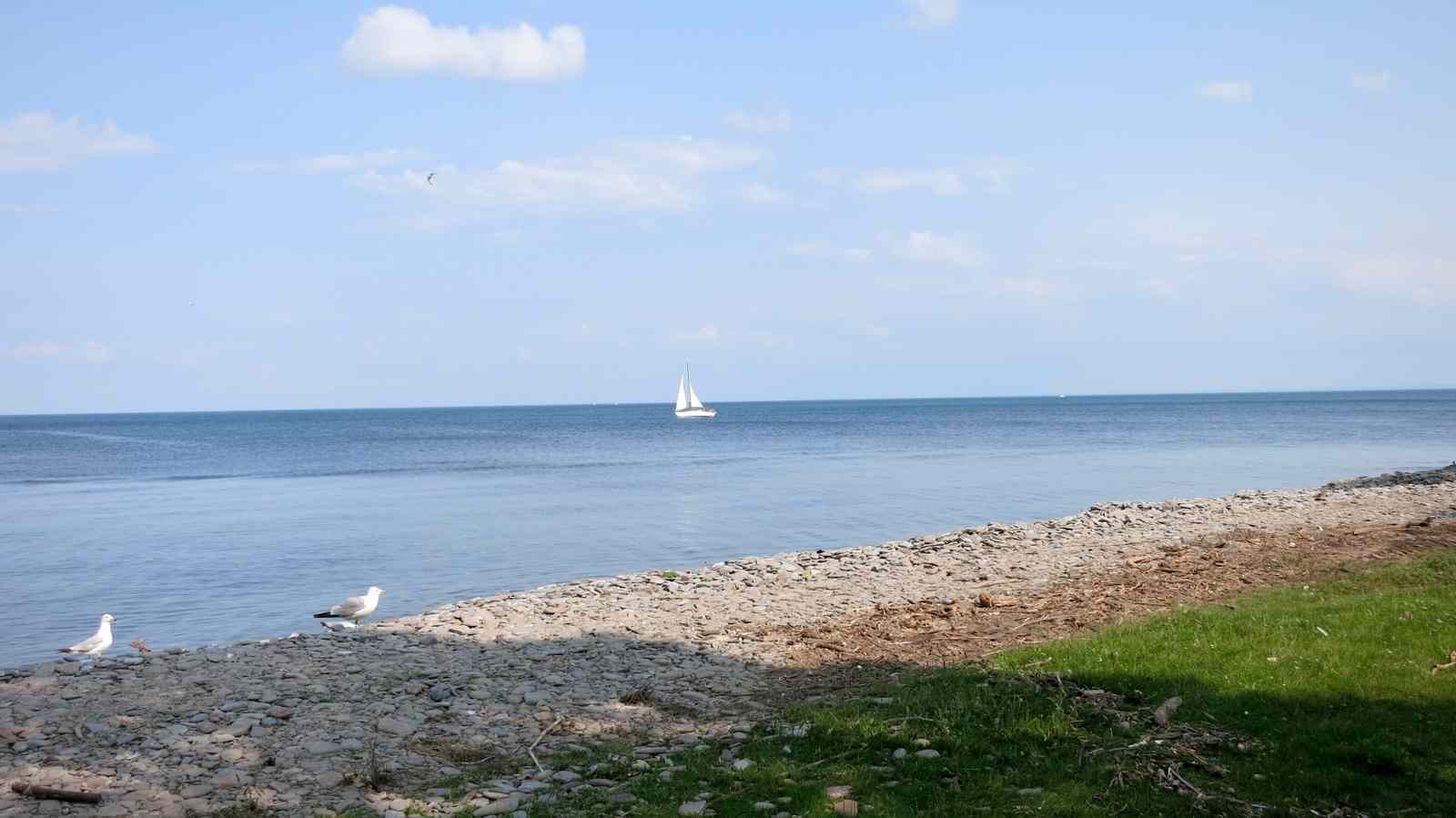 GLOW Adventures encourages people to experience the joys of the Great Lakes first-hand by swimming in them. Members of this foundation are happy to help swimmers enter the world of open water swimming. Experienced GLOW swimmers assist beginners with training for and completeing swimming events and marathons.

Along with completing his own swims, Robert helps organize swims for others. In December 2020, GLOW hopes to collaborate with the Shelter Movers, a group that helps women move out of abusive situations, to coordinate a second Cold Crusade event. Rob McGlashan before the Cold Crusade Swim on November 16, 2019.

“The idea is that a charity that’s more focussed on people also has a real collaboration with one that is more environmental.”

The event would comprise of a series of ice swims dedicated to raising awareness for both the Great Lakes and the Shelter Movers.

GLOW’s signature event is the 24-Hour Lake Ontario Challenge, a relay swimming event that happens in the autumn. During this event, one person or a team are in, on, or near the water for a full day, paddling, swimming, or cleaning up the shoreline. 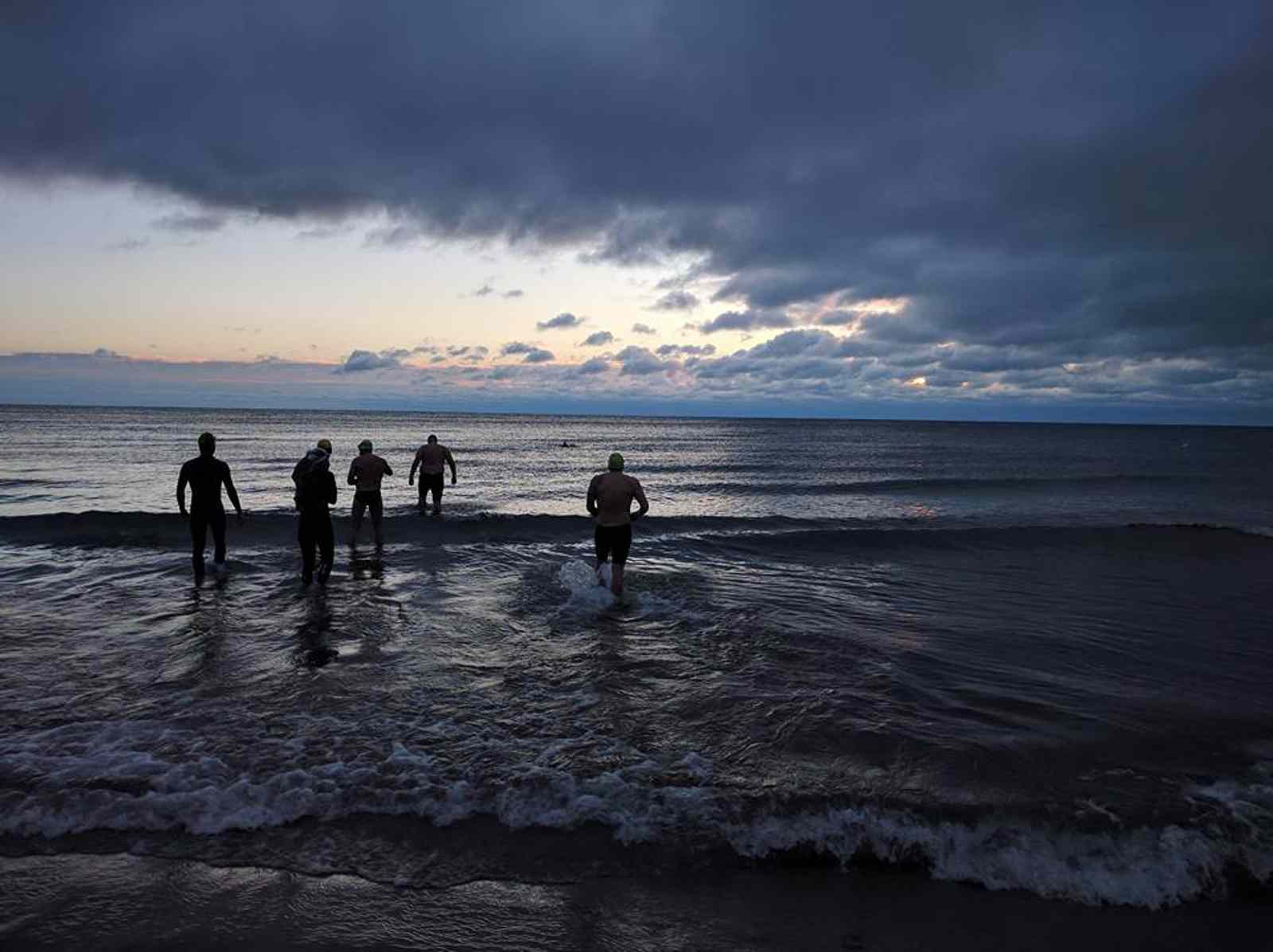 Robert has seen many people find and fall in love with open water swimming through GLOW Adventures. He believes it’s something that anyone who loves the outdoors will appreciate, though people may love it for different reasons.

Some people like open water swimming because it’s a way to get closer to nature. For others, it’s all about facing challenges and testing boundaries.

Open water swimming, and GLOW adventures in particular, often has a social, community-based aspect. And the open water swimming community is growing in the Great Lakes. Even right in the heart of Toronto, in Cherry Beach, and in Woodbine Beach, Robert sees more and more people coming out to swim and socialize in Lake Ontario. 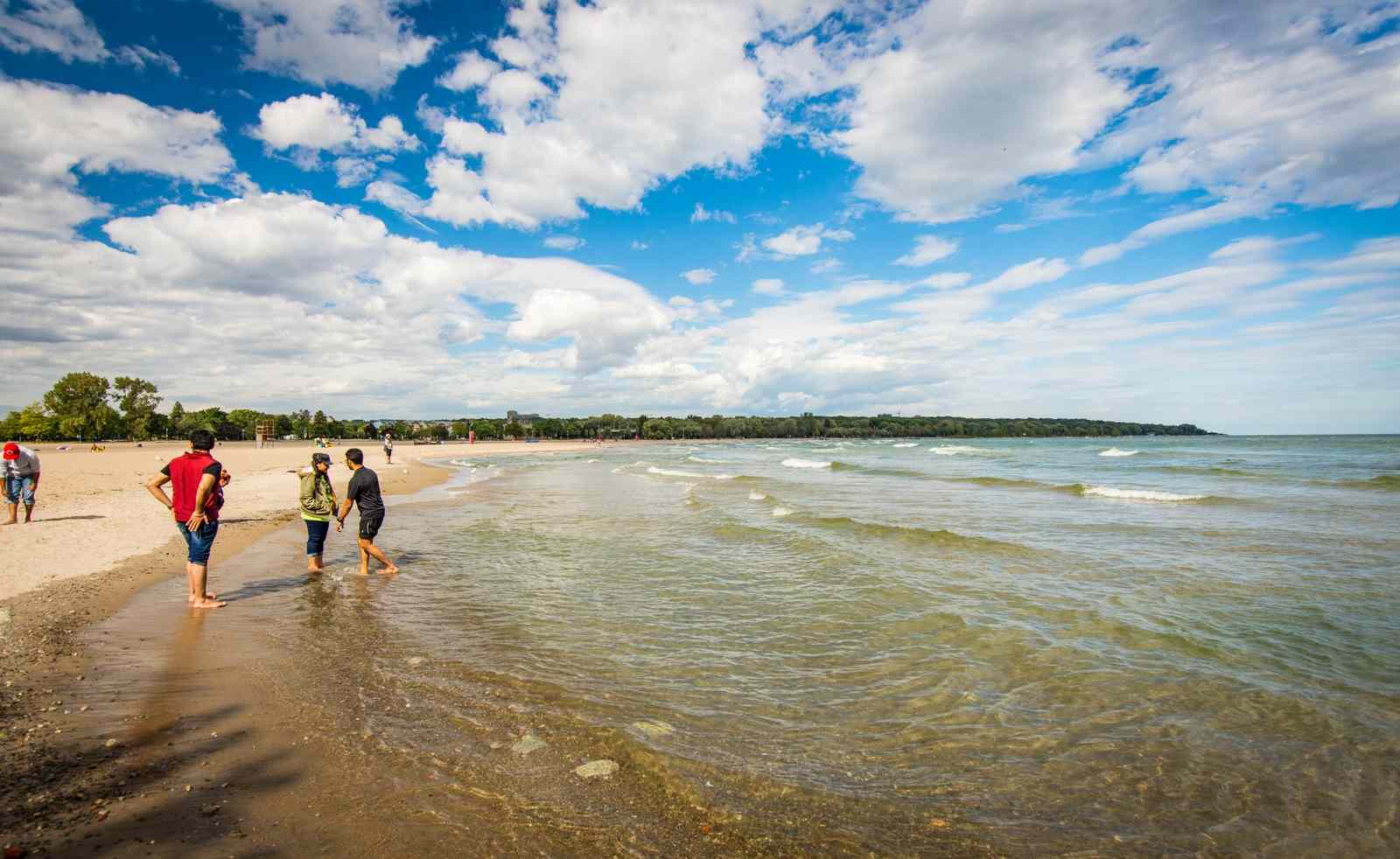 
From pollution to progress

Seeing people swimming in Lake Ontario would have been something of a shocking sight only a few decades ago. This is part of the reason that Robert loves swimming (and loves seeing others swimming) in Lake Ontario now.

In his teens and early twenties, Robert recalls a period during which people were discouraged from swimming in Lake Ontario because of concerns about water quality and pollution. Now, Robert is thrilled that enough work has been done to improve the health of the lake that people are able to swim in it.

“The Great Lakes are these vast, well-maintained, swimmable bodies of water. People find that fascinating.” Witnessing this trajectory has greatly impacted Robert’s perspective on the lake. To him, it shows the importance of looking after our waters and caring for them, so we can continue to swim in them for years to come.

Lake Ontario is the vast, beautiful body of water where Robert grew up. He deeply appreciates the fact that a lake once considered unswimmable is now a natural haven in an urban cityscape that both seasoned open water swimmers and doggy-paddlers can enjoy.

Robert would like to see even more initiatives dedicated to continually improving the health of the lake. On Easter Island, people remove plastic from the beach on a weekly basis. On Lake Ontario, this happens maybe a couple times a summer––not often enough, in Robert’s opinion. 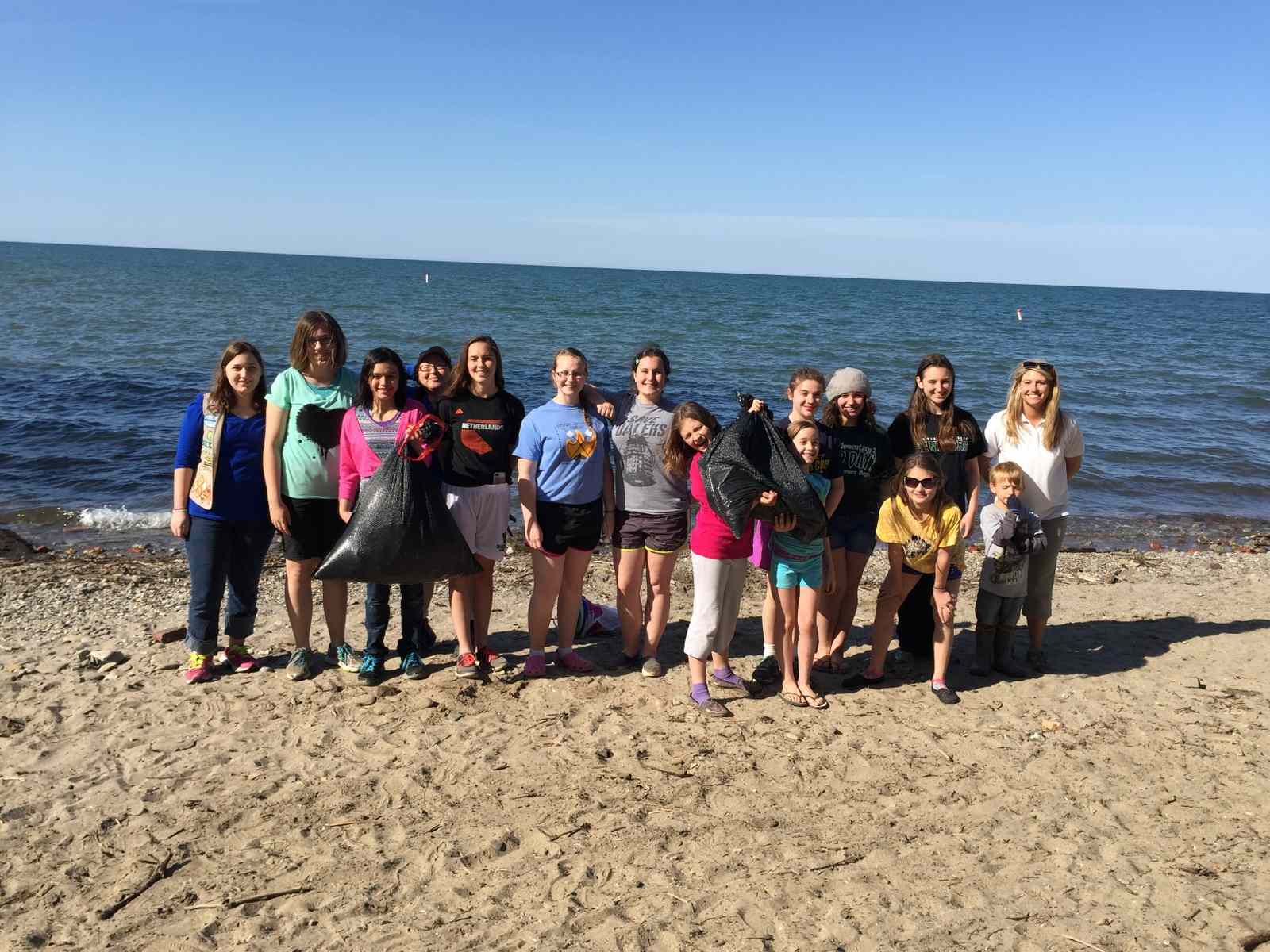 He also worries about how substantial our progress actually is. “Are we getting better at dealing with the problem?” He wonders, “Or are we just getting better at hiding it?” He’s seen exposed sewer systems while travelling, he’s seen a river of sewage going right into a lake. He wonders what may be flowing into Lake Ontario out of our immediate sight.

Bridging the gap between locals and their lakes

Robert believes that feeling connected to Lake Ontario is the first step in caring about its health and taking action to safeguard it.

He’s noticed that there are a lot of people who live around the lake that don’t take full advantage of it, or don’t feel connected to it. But the more connected people feel to the lake, the more invested they’ll be in its health, and the more efforts they’ll make to protect and maintain it. They’ll be less inclined to abuse or neglect it. They’ll be more inclined to take positive steps at an individual level. 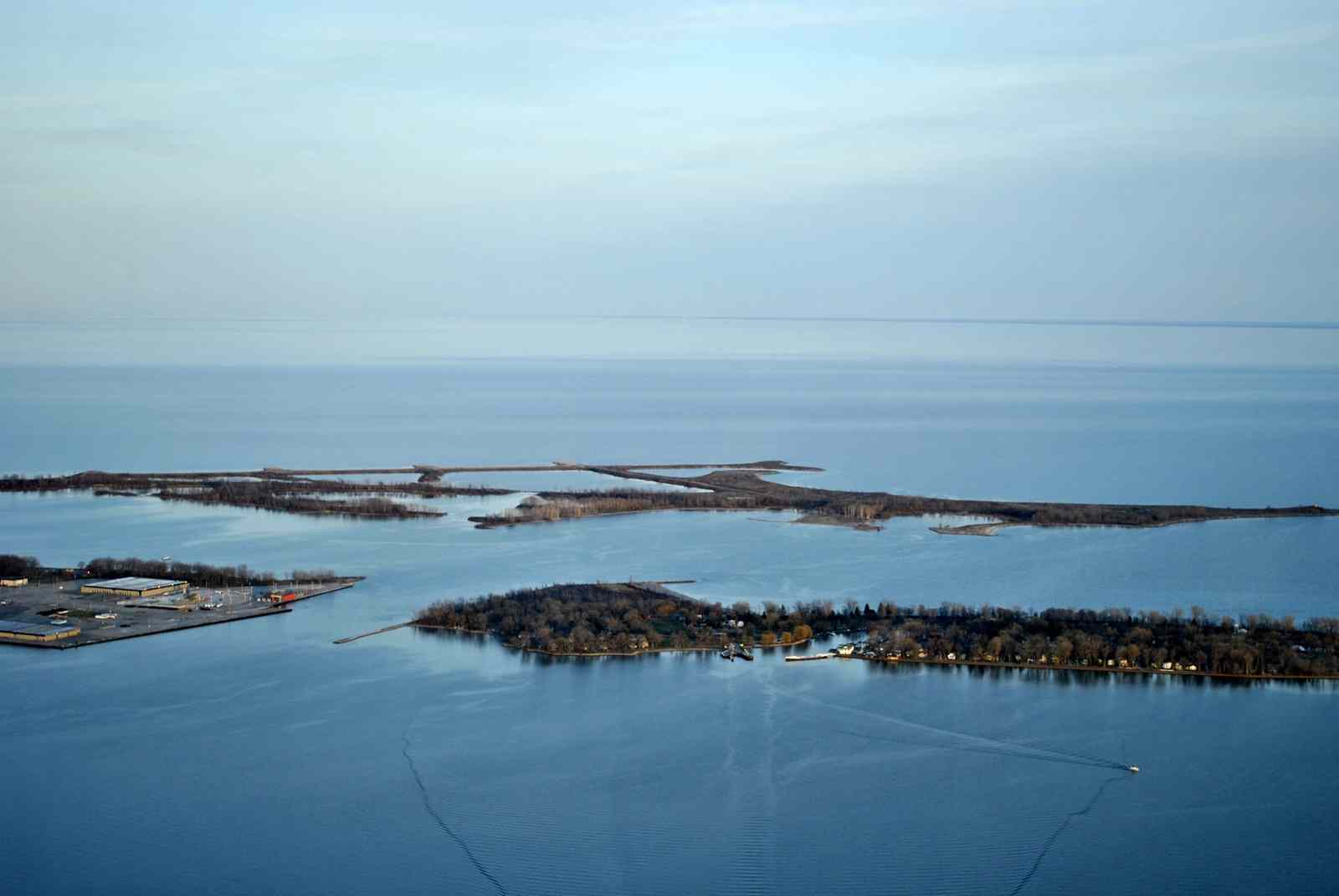 Robert feels that those living near the lakes should see them from the perspective of people who don’t live there. Rather than taking the Great Lakes for granted, they should value these incredible freshwater resources–the biggest in the word.

A swimmer’s mind goes everywhere during an open water swim, especially on the longer ones. Robert figures that most people assume swimmers’ minds are focussed on one thing: the finish. Robert McGlashan with Thibault Duchatal before his Lake Geneva Swim in August 2019.

The truth, however, is that when he’s swimming, Robert’s mind may be wandering from trivia to what time his next feed will be. Other times, he’s simply thinking: “I wonder how many more hours of this.” At some points, he admits, you just want to make it stop.

That said, there are moments that are very peaceful, especially when you take time to appreciate the spectacular natural world and feel that you yourself are truly a part of it.

Robert supposes that this ability to endure in the water transfers over to life on land. He thinks that anything people do to challenge themselves or get out of their comfort zone will benefit other aspects of their lives.

“For most people, nearly anything is possible if they have the right mindset and they want to do it. And I think for any accomplishment, it’s more about determination than just ability.”